April 13, 2016
It has been a long time since i posted here. Due to my work commitments i am unable to post about certain trips until i am allowed to do so. For those who don't know, i work for Surecatch World. One of the largest fishing tackle manufacturers in South East Asia that has a global distribution network. I represent three house brands (Zerek, ATC, Surecatch) in my capacity as the marketing manager. Often i get to see and test new products that our product development team has come up with before they hit the market. One such product was the Zerek Zappelin 125g, 220mm Stick Bait. 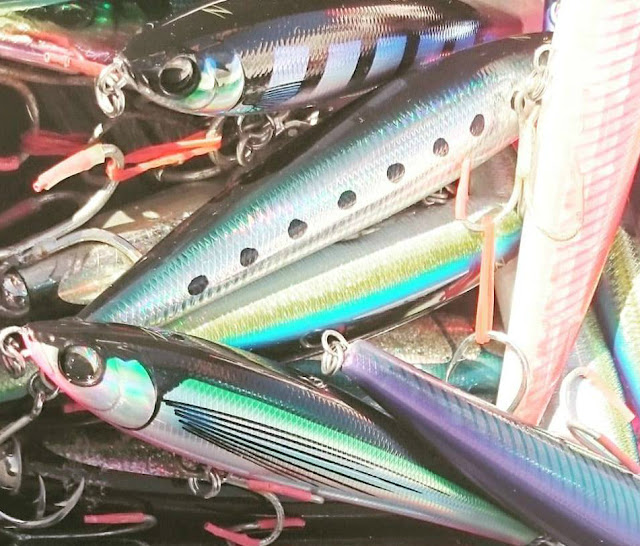 I was invited by my boss, Freddie on a trip to the Maldives on board the Seagal with Capt Ibrahim. Having never done this sort of fishing, i was hesitant first, but he assured me it would be worth my while. I began preparing for the trip about a month before, by going for casting sessions with him. I managed to squeeze in 2 and half sessions within that time and learnt the fundamentals from Freddie. He was also kind enough to lend me his tackle and made all the necessary preparations before the trip. We were to be  joined by two friends from Thailand. 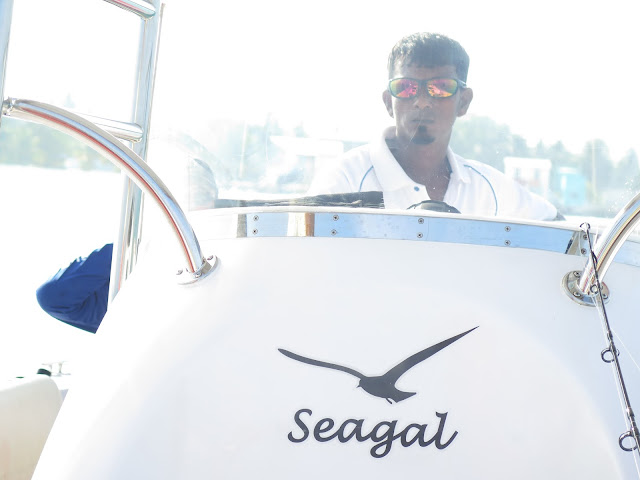 It wasn't as easy as some people make it look. Casting on the deck with waves constantly putting you off balance takes some getting used to. Once you find your sea legs and and balance properly, the casting becomes easier. We were using the sweep and stop method with our protoype PE 8 popping rods from Zerek. It wasn't long before we got hooked up. Small GTs, Blue Fin Trevallies and Red Bass were landed on the first few casts. I landed my first meter long GT soon after. I was completely lost and wore myself out quickly as the fish went deep. Freddie and Ibrahim talked me through the process and finally it was landed. 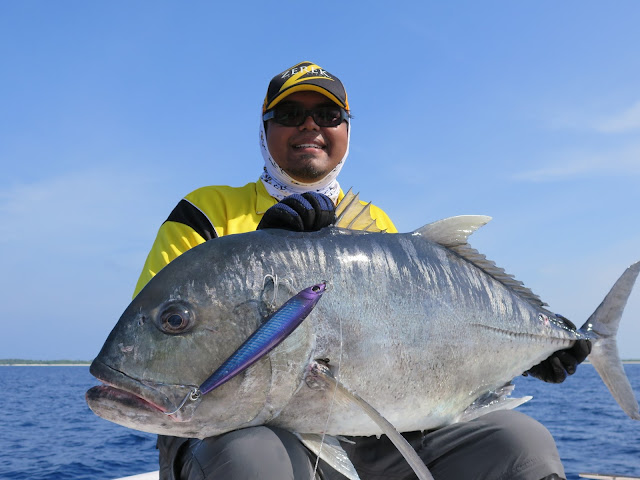 As my confidence grew, i was making longer casts and hitting more fish. Loading the rod is very important when you want to make a long cast. Your momentum and strength must be in tandem. I would recommend at least 10 sessions of casting practice to build stamina before you head for your trip. 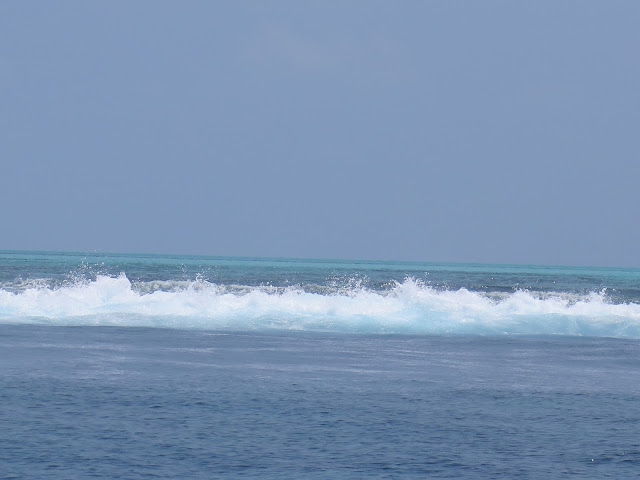 Fishing on the sport fisher meant that were able to get pretty close to the reef. Often these areas were quite shallow, ranging from 5 meters to just over a meter. When a sizable one was hooked up, the captain would gun the boat out into open water to prevent the fish from cutting us off at the reef. From there it was just a matter of pacing ourselves and letting the rod and reel do their job. 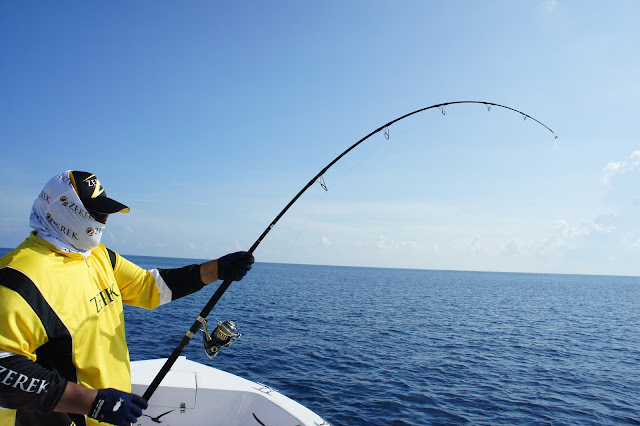 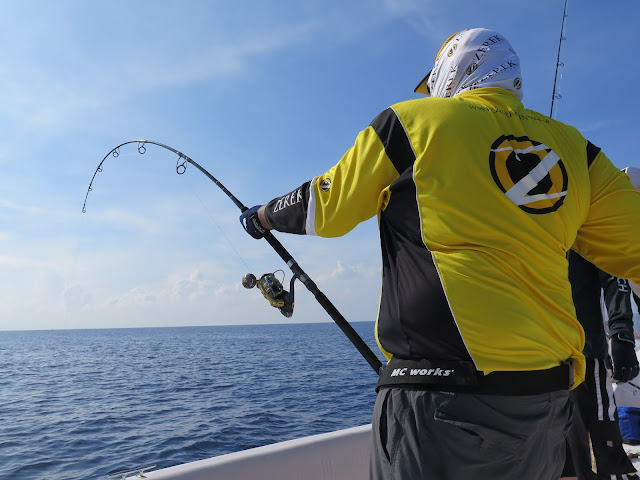 A fighting belt is very useful when you need to pump the fish. Without one, you can expect black and blue bruises where you anchor the rod for leverage. Always put on your belt before you cast. Although the deckhand rushes to help you put one on when your are hooked on, sometimes the fish is dropped during the transfer of the rod to the belt. 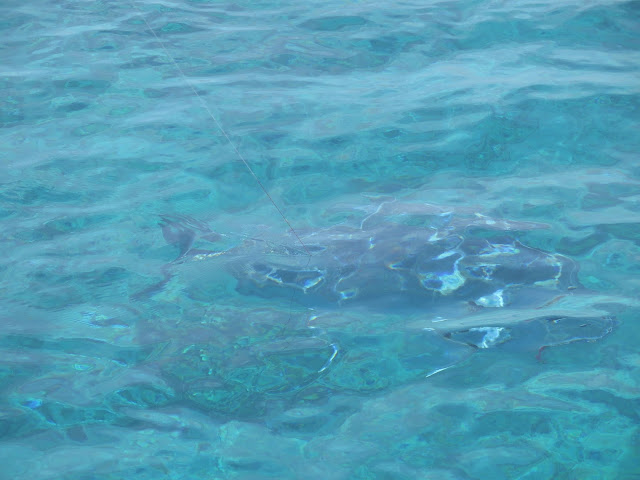 Clear waters made for some amazing visuals while fishing. The temptation to strike on the initial explosion is hard to resist, as our brain reacts to what our eyes see. The key is to wait until the line runs before you set the hook. Both single and treble hooks held up well during the trip. 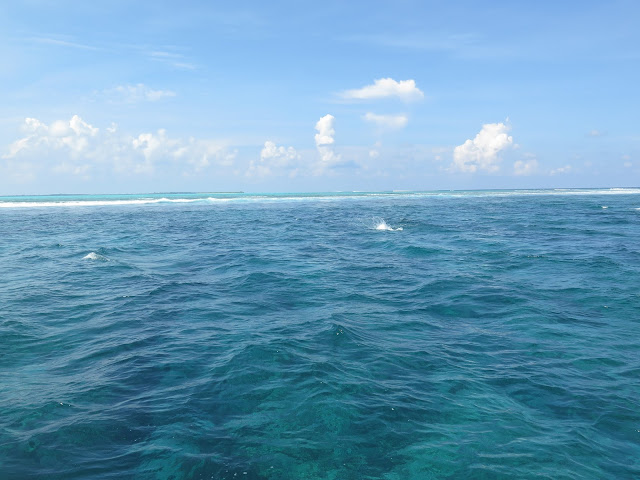 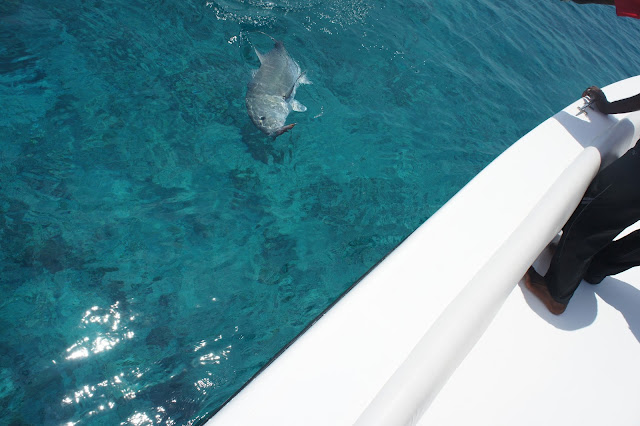 We stayed in two different islands during our trip. The atmosphere was laid back. The locals grow what they can and fish is a big part of their diet. They get everything else from a boat that comes from the capital Male every two weeks. There is no drinking water on the islands so bottled water is stored in excess. Rain water is used for other chores like washing and cleaning. The weather gets hot really fast so the stone house are mostly installed with air conditioning. 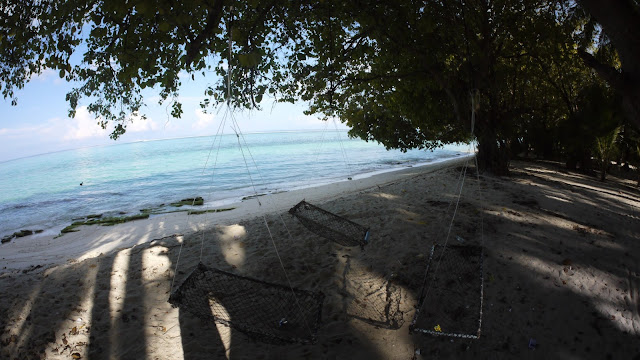 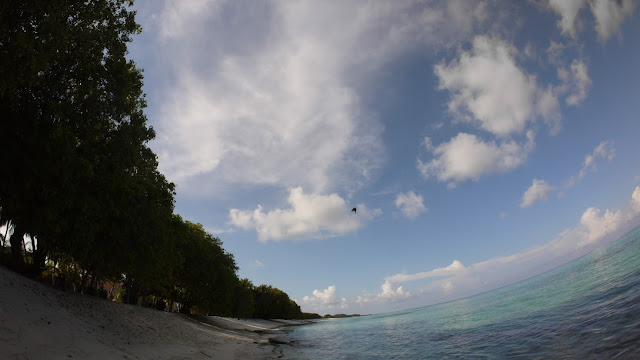 My biggest GT of the trip measured in at 117cm. It was a resident of the reef that we were fishing at that time and easily recognized by the Captain by the scar on its face. I was lucky that he gave in to me after a hard 10 minute fight. 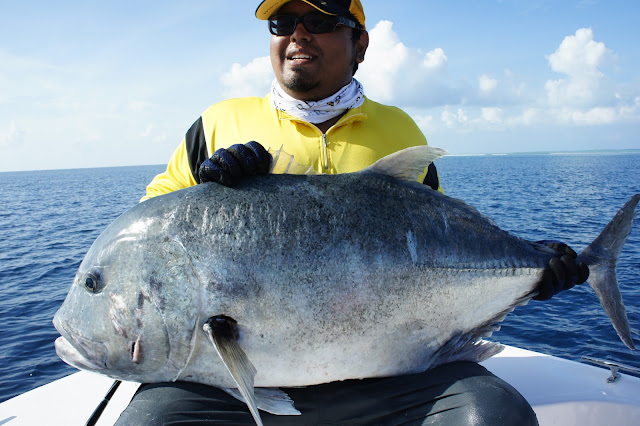 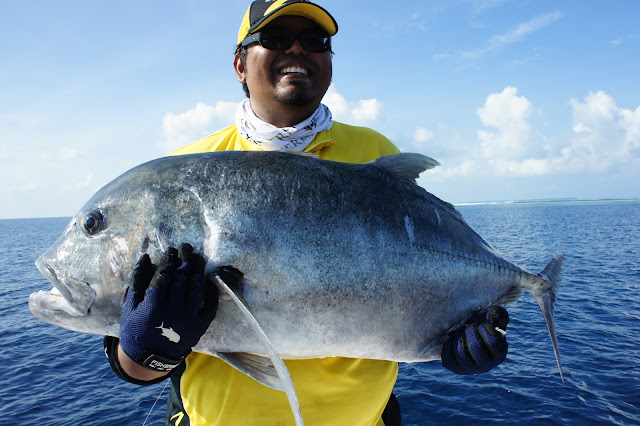 I landed another one at 110cm the next day. Those GTs that are below a meter are referred to as the "naughty" size by the captain. They are fast and usually take your lure before the big one has a chance to smash it. 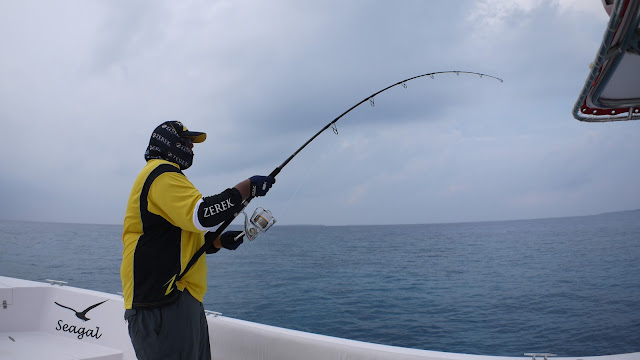 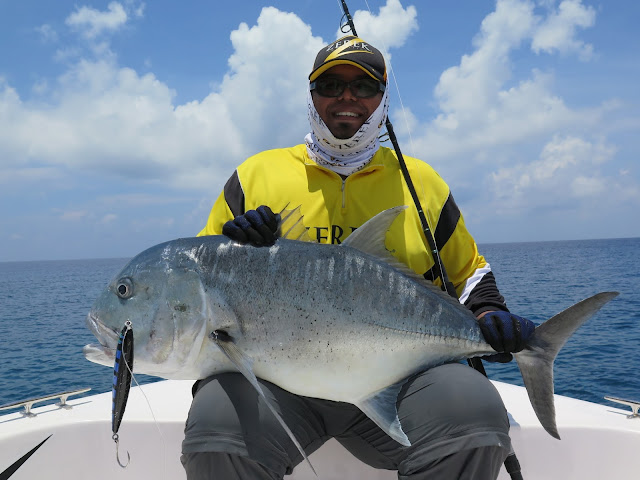 There were a couple of other species my friends caught on the trip as well. These included Groupers, Yellow Fin Tuna and Dogtooth Tuna. 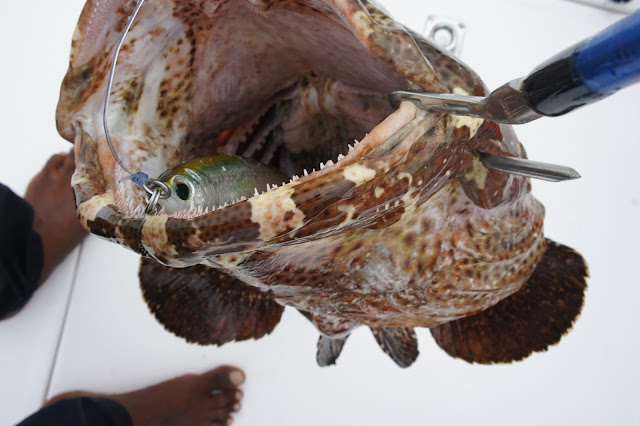 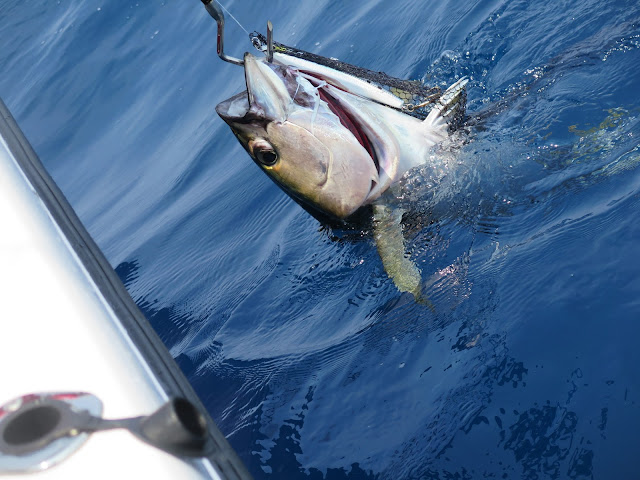 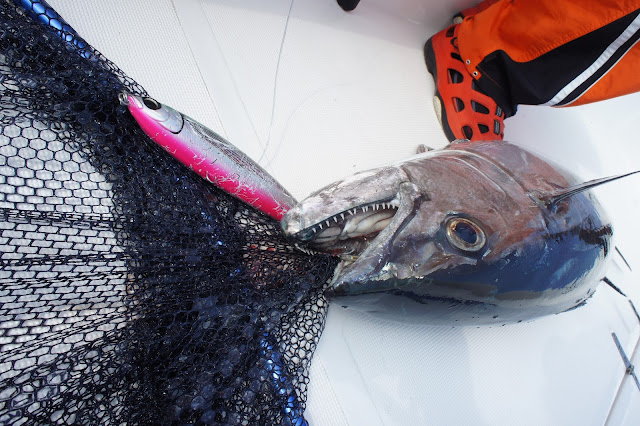 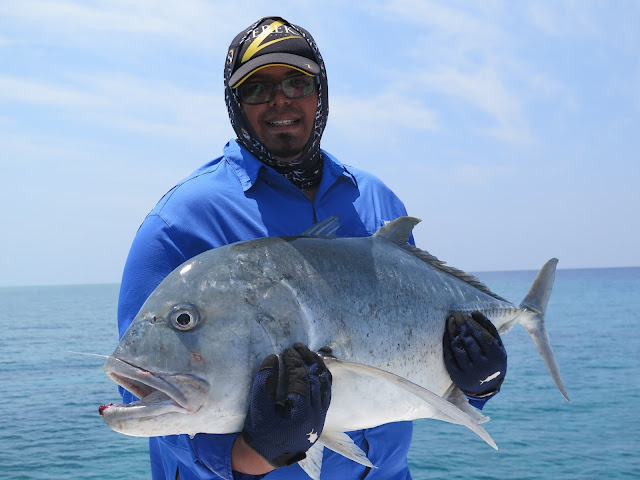 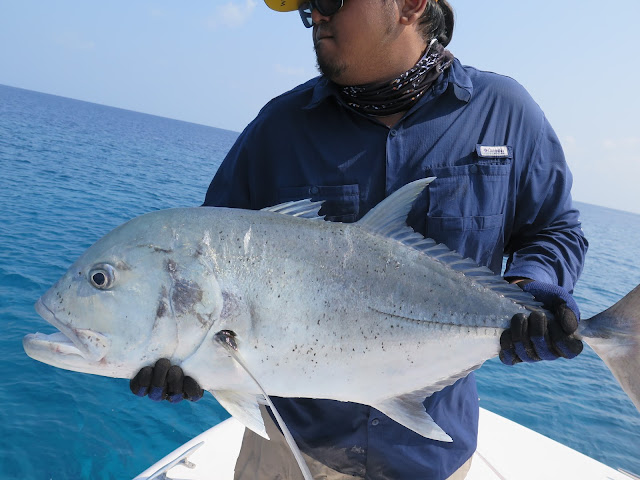 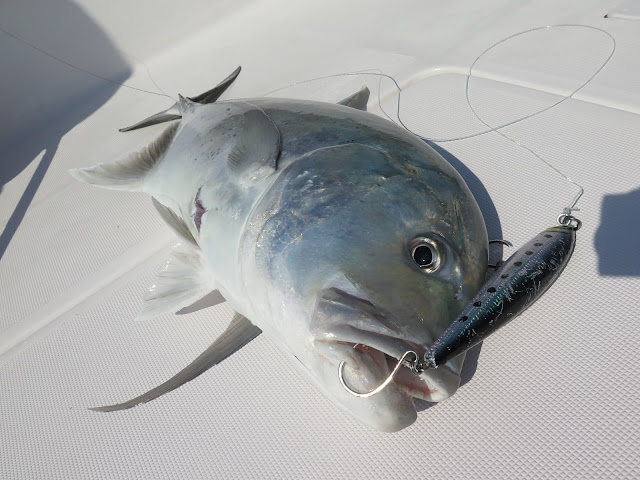 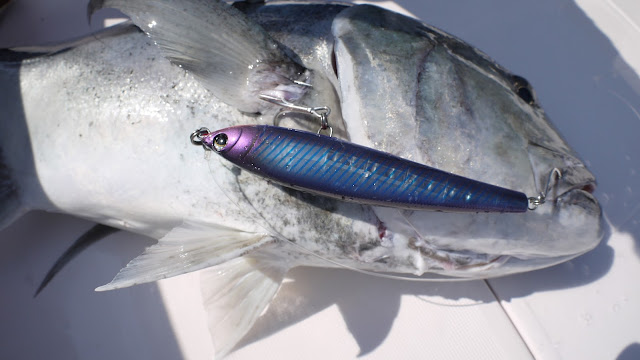 And of course plenty of Blue Fin and Red Bass kept us busy and tired us out at an alarming rate! 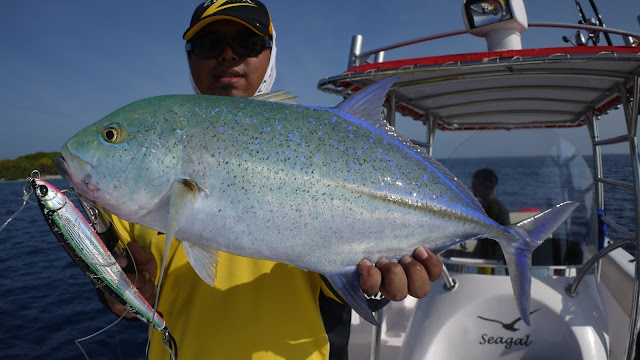 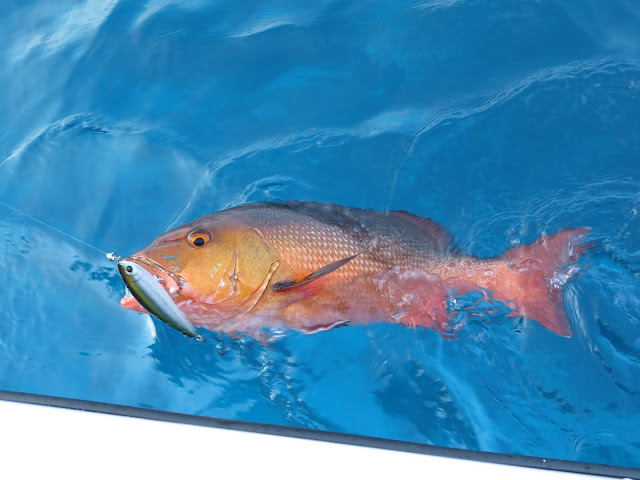 The trip was indeed the highlight of the year for me in 2015. The Zerek Zappelin performed well and should be available in the market as you are reading this. I wore myself out thoroughly on this trip. Special thanks to Freddie, Dennis and Tui for taking such good care of me in the Maldives. These are memories i will not soon forget.