Mackeral Mayhem with the Zerek Cavalla

December 19, 2014
Zerek recently launched a new sinking minnow designed specifically to target the Spanish Mackerel. These toothy predators are a prized game fish and can be found in the waters off the coasts of Malaysia. The lure weighs in at 45 grams and features ‘wire through’ construction and a tough ABS body that can withstand harsh saltwater conditions. It’s centrally balanced for superior castability and stability during high speed retrieves. It is available in 8 highly reflective baitfish colors.

To put this lure to the test, we headed up to Desaru, a couple of weeks before the monsoon season started. We would be on board with Captain Badol, who has more than 15 years of experience fishing these waters. The journey to the first fishing spot would take about 45 minutes. En route to the location, we set up our tackle. We were using the Zerek Temptress PE2-3 Popping Rods, paired with the ATC Valiant SW 4000 reels which were loaded with 20lb Surecatch Gallant braided lines. The braided lines were joined to our 40lb Surecatch Fluorocarbon lines with an FG knot. We used a barrel swivel and a split ring to connect the Cavalla.

We arrived at the first location to find at huge ball of bait fish being attacked by Bonitos. Unable to resist a little fun, we made our cast and got instant hook ups. The key here is to cast beyond the bait ball and rip the lure back. Multiple hook ups occurred several times and we were landing schooling Bonitos in the 3-5kg range.  30 minutes later the Captain chided us and told us to focus on the targeted species.

It was a pretty windy day, but we did not have any trouble casting our lures out. I selected a neutral baitfish color while my fishing buddy selected a bright pink color. We used the first few casts to estimate the depth and the time it took the lure to hit the bottom. On my third cast, I had a hit mid-water. Once I had set the hook, the fish dash towards the boat. This is where having a reel with a higher gear ratio came in handy. I was able to quickly reel in the slack line and keep tension on the fish. The fish fought in an awkward manner and I soon realized why. It was foul-hooked. As the fight came to an end, the deckie approached with a gaff to assist with the landing of the fish. The fish weighed in at 9kg. Not a bad way to start the day. My fishing buddy, Jith was on next. This time it was a smaller specimen around the 5kg range.

The deckie Zam, was on next at the bow of the boat. As I reeled in my lure while watching Zam battle his finned nemesis, my lure was smashed about 3 meters away from the boat. Double Hook Up! In a matter of seconds, it was a triple hook up. Jith and I had to tango a little to get our fish out of each other’s way at the back of the boat. It was a moment to savor as the sound of screaming reels (and anglers) filled the air. The Zerek Temptress rods held up well and soon we had all three fish on the boat. We landed a couple more before we stopped for lunch.

The sun was high in the sky and my full belly was causing me to drift in and out of sleep. I decided to nap while the rest continued fishing. I had barely closed my eyes for 10 minutes when I heard a yell. There was a small commotion at the front of the boat. And the word Marlin was repeated several times. I went to the front to investigate and was told by the Captain that the deckie Zam had hooked on to a Marlin with the Zerek Cavalla. I watched in disbelief,  as this magnificent fish put on a spectacular aerial display before diving to the depths.

“Please God, let us land this fish.” I mumbled as I got my GoPro ready. The Captain estimated the Marlin to be over a 100kg. Zam was definitely under-gunned as he was using a 4000 sized reel. The fear of losing through open hooks also played on his mind as he backed of the drag. 1 hour passed, the fish was not giving an inch. Every time Zam, managed to reel in some like the fish would take out double of that. The Marlin kept itself at mid-water and was using the current as added resistance.  Zam began to feel the strain after 90 minutes. Jith took over for a bit as Zam took a break.

We thought we had a break through a couple of minutes later, as Jith was suddenly able to get in some line. However, it was not to be as the fish dash back down as soon as it saw us. Zam got back on the rod. The fish was beginning to tire. It was almost 2 hours since we hooked up this fish. We had moved 3 nautical miles the Captain said. Little by little, Zam was gaining on the fish. Soon the fish was within 5 meters of the surface. That’s when I caught a glimpse of the leader wrapped around its bill as I tried to capture some underwater footage with my Gopro Camera as he dove down again.

I cautioned Zam about this and told him we had to get the fish in soon as the 40lb leader might give out at any time now. No sooner had this passed my lips, when the line went slack. Just like that, the fish swam away with his trophy. We were disappointed. The Captain tried to cheer us up by taking us to one of his famous secret spots. The journey to the next spot was long and silent. We arrived at the location, a shipwreck at about 5pm. The first few cast yielded no hook ups. Having noticed earlier in the day that the Cavalla, has a natural swimming action even when cranked slowly. I let my lure sink to the bottom and began using a slow and staggered retrieve. I was on within the first few cranks. As I fought my fish up, Jith, whose lure had just hit bottom tried the same approach and hooked up too. We landed 4 more before it was time to head back.

It had been a really eventful day, and we had a good catch on the Zerek Cavalla. The lure performed well and has earned its place in my tackle box. We are going to target Sailfish in Pekan next with this versatile lure. Stay tuned! 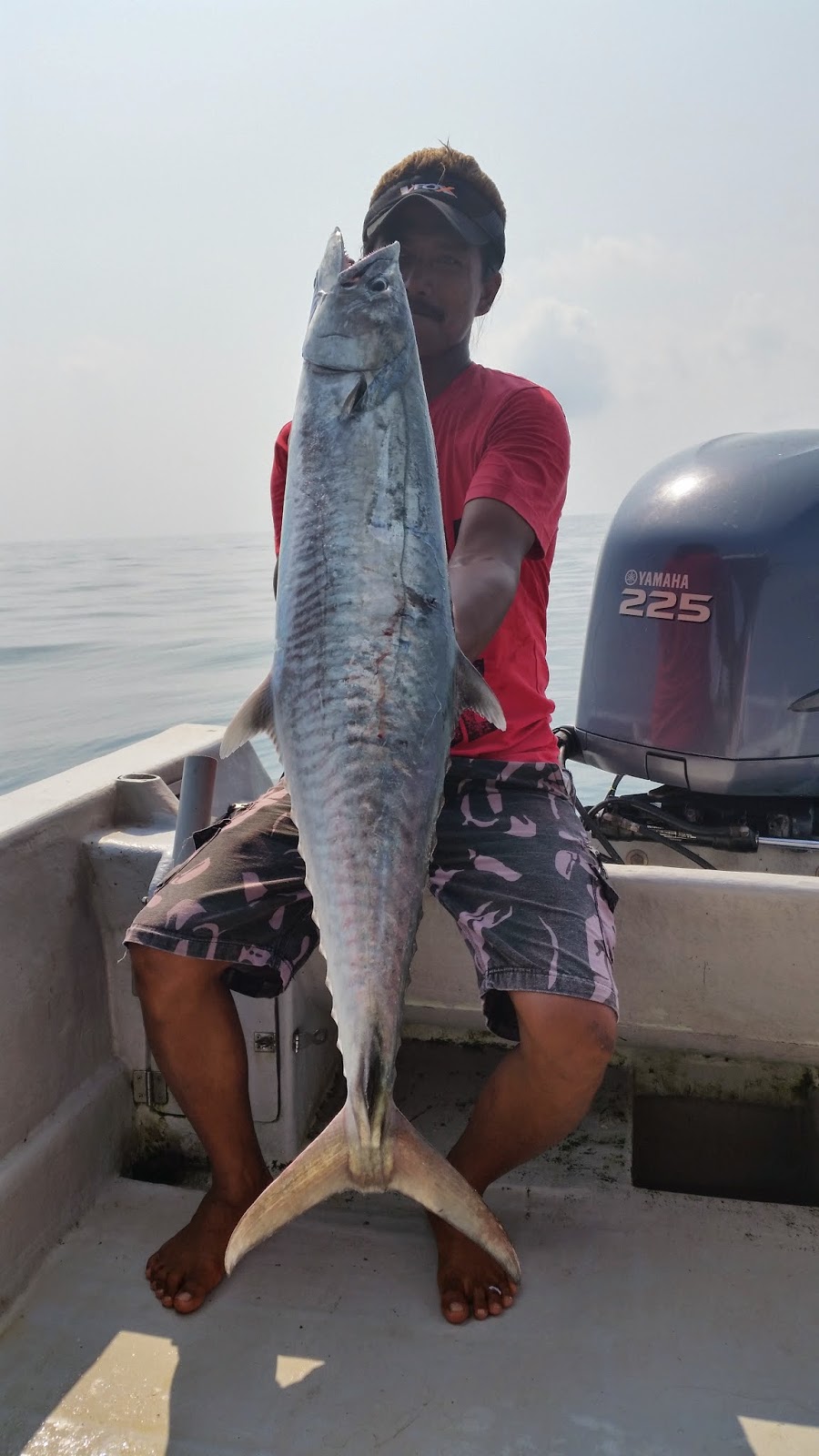 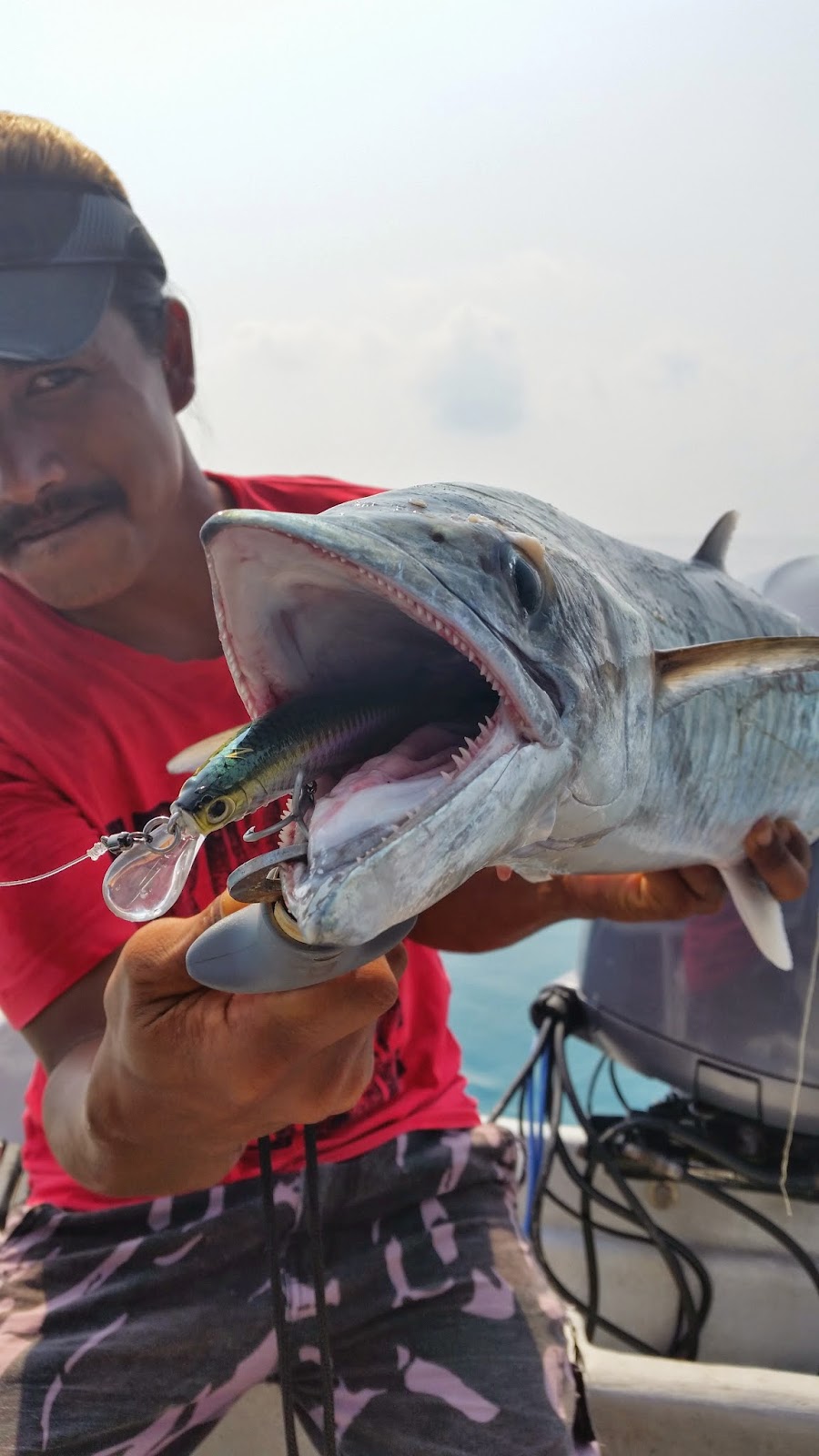 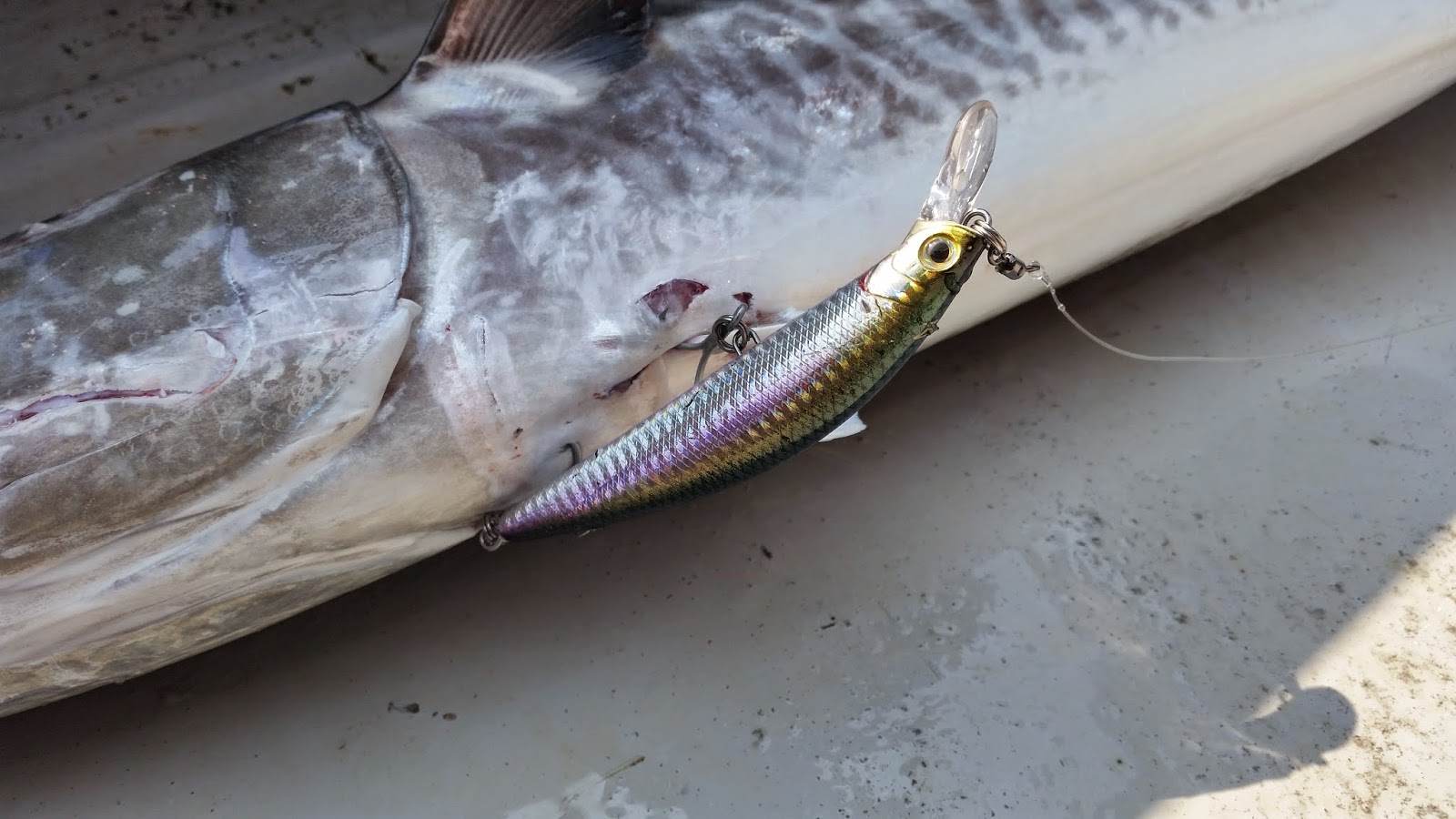 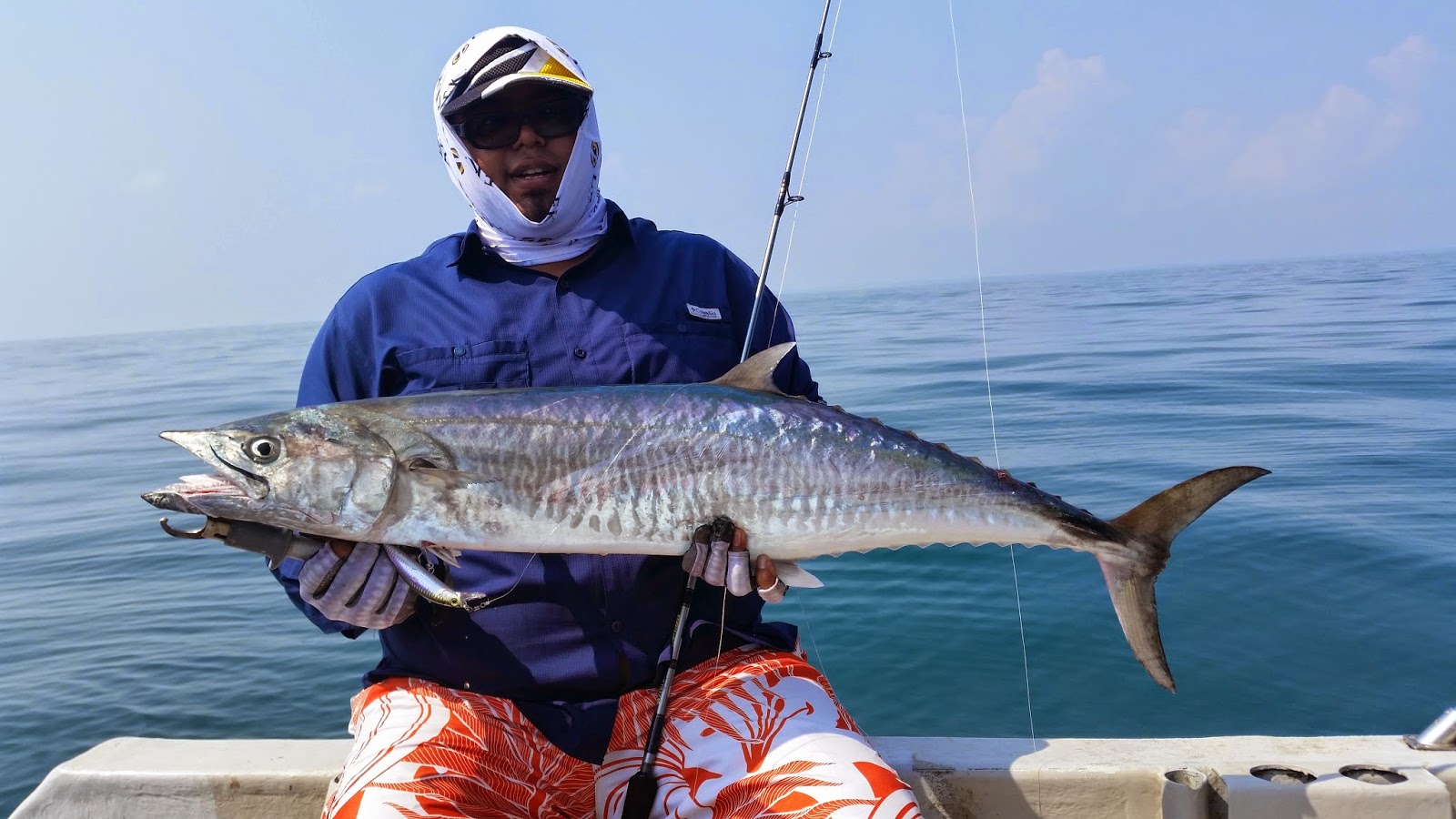 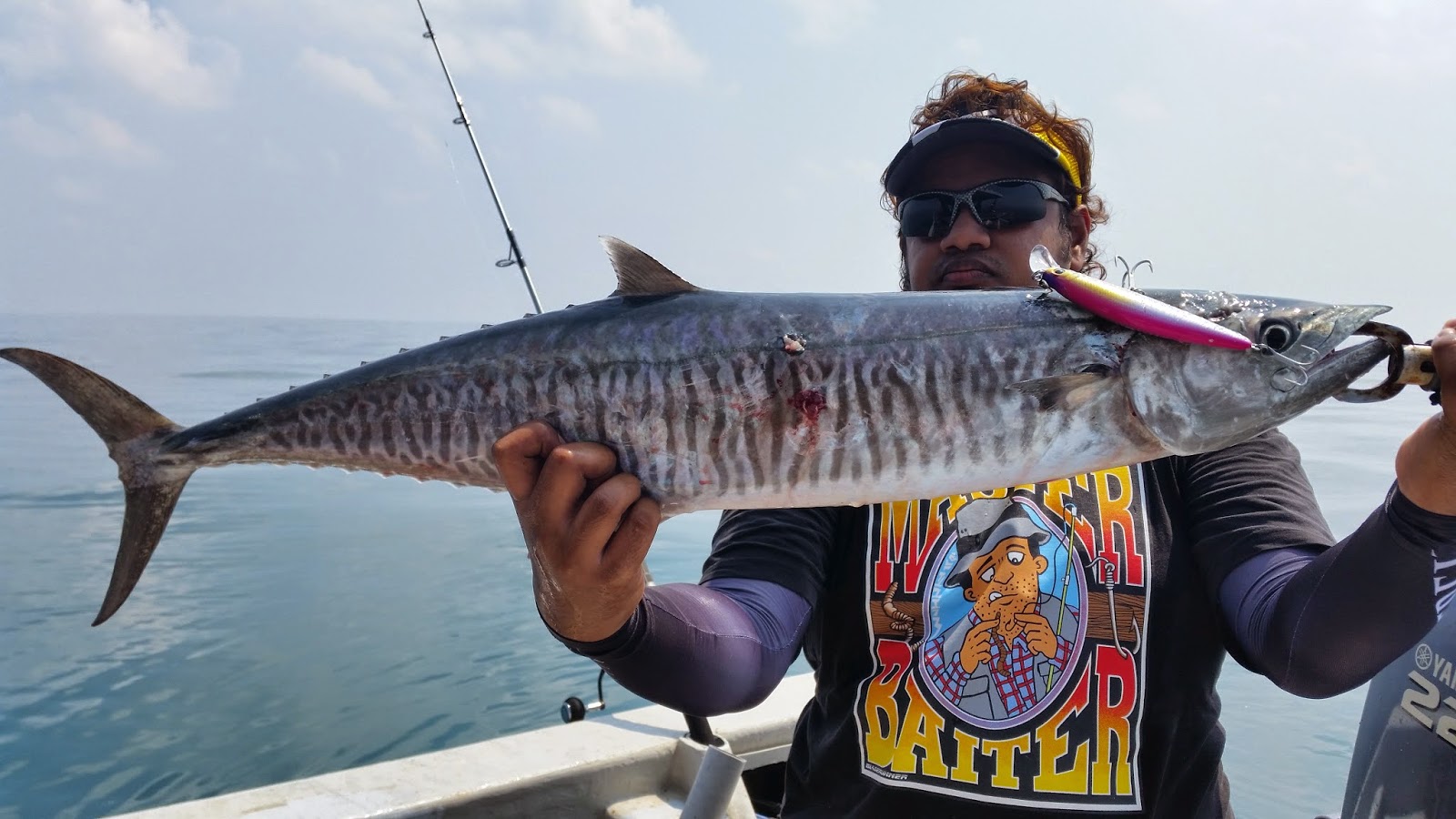 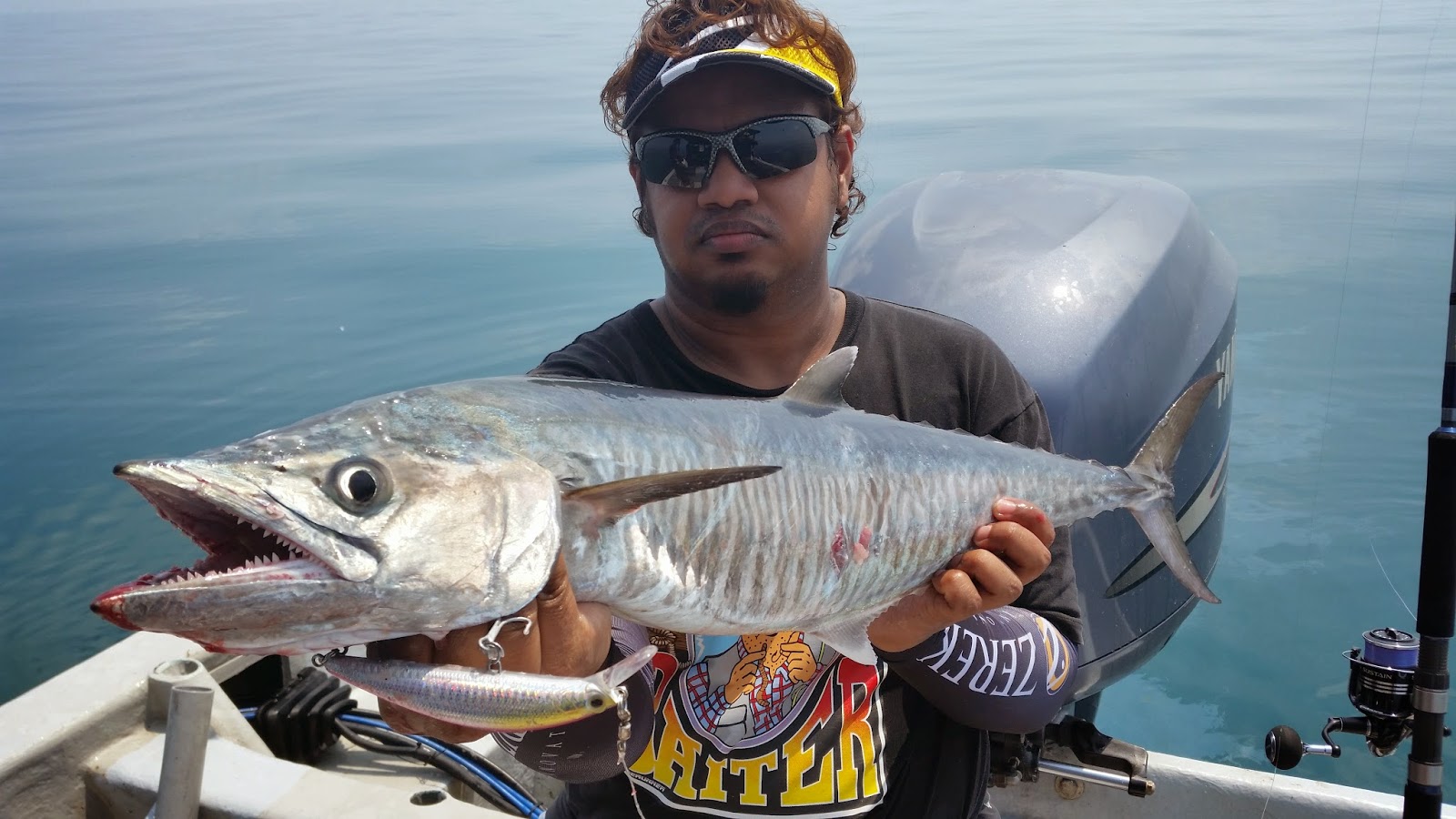 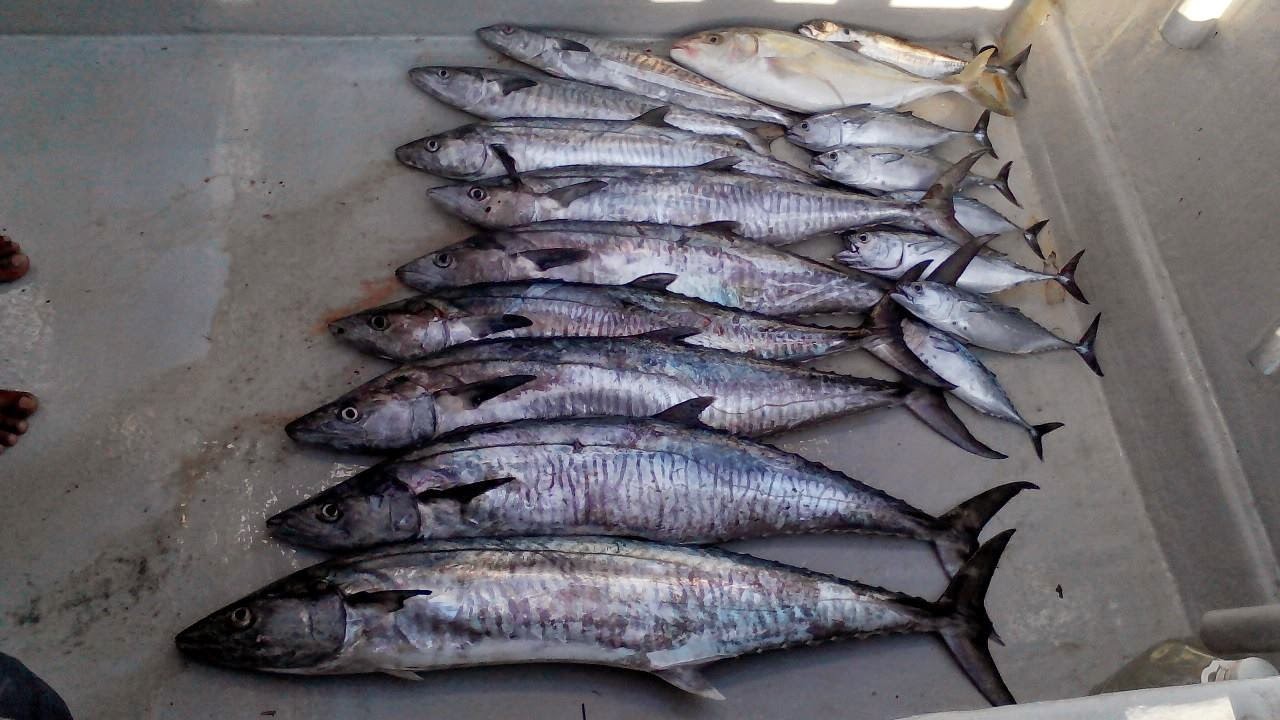