August 21, 2014
So we went to Rompin to take part in the annual squid season. Armed with ultra light tackle consisting of 1000 sized reels spooled with 4lb braid and 16lb FC leaders and the new Surecatch Ultraxnano Rods. We spent two whole days targeting these molluscs with our Surecatch Cimo Squid Jigs.

We rigged up two ways. The first was the most common method which involved using a swivel and attaching a sinker and a squid jig tied to a short leader. You work this rig by bouncing it of the bottom in a Madai like way until you get the squid's attention and it comes to you. The second uses a ball sinker. This is a better rig for searching for the squid as it covers more ground and you can work it higher up the water column. I use a barrel swivel instead of a snap though. 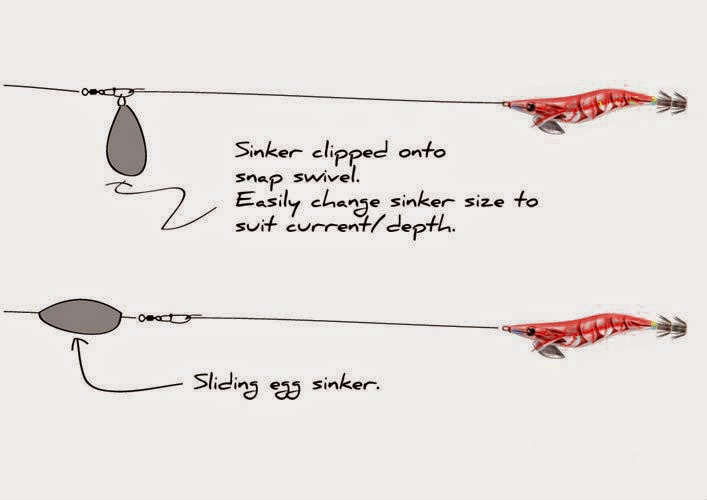 We were after two types of squid. The green eye and the arrowhead. The green eye were easier to target and not fussy on colour. They took the jig no matter what we did. The arrowheads on the other had, were a little harder to find. They were a little high up in the water column and reacted to fast twitches using the ball sinker method. They put up a better fight too. Many a times i would hook onto an arrowhead and the 1000 size reel would scream.

Now hooking a squid is easy. But from then on you have to be cautious of how you handle the fight. Pump too hard or set a high drag and you can lose the squid as the tentacles break off. Set a reasonably loose drag and just keep the tension on the rod and crank. As the squid makes a short burst, reel in the slack line and maintain the tension. This can be quite a rewarding fight if the squid are larger and in the kilo range.

Once you get the squid up to the surface, it gets sort of tricky. And if you are careless, a whole lot messy. Don't pull the squid in facing the boat. I cannot emphasise on this enough. Chances are you or your buddy who is helping you land the squid will be covered in ink. The boatman is gonna get grumpy and your deckie probably has a lot of washing to do. Try to get them to the boat side ways. A tip to those grabbing the squid. Grab it behind the head firmly, and insert your index finger into the cavity where the head is joined to the body. Make sure the squid is facing away from you and give it a little squeeze. The squid will unload the ink and whatever water it has. Then you can take it and dump it into the pail, which most boats will have. The Rompin deckies will usually cut the squid and remove the ink sac for you. You can ask them to gut it for you if you want too.

Now i have friends who like nothing more than to fish up a squid, clean it and eat it. Squid sashimi!!! I'm not a big fan of this but i have been told that you should have soba sauce and wasabi in your tackle bag when you go fishing for squid.

So give it a go, Squid Season starts in August and usually lasts till the end of September. But it is possible to catch them before or after. Just not in insane numbers. 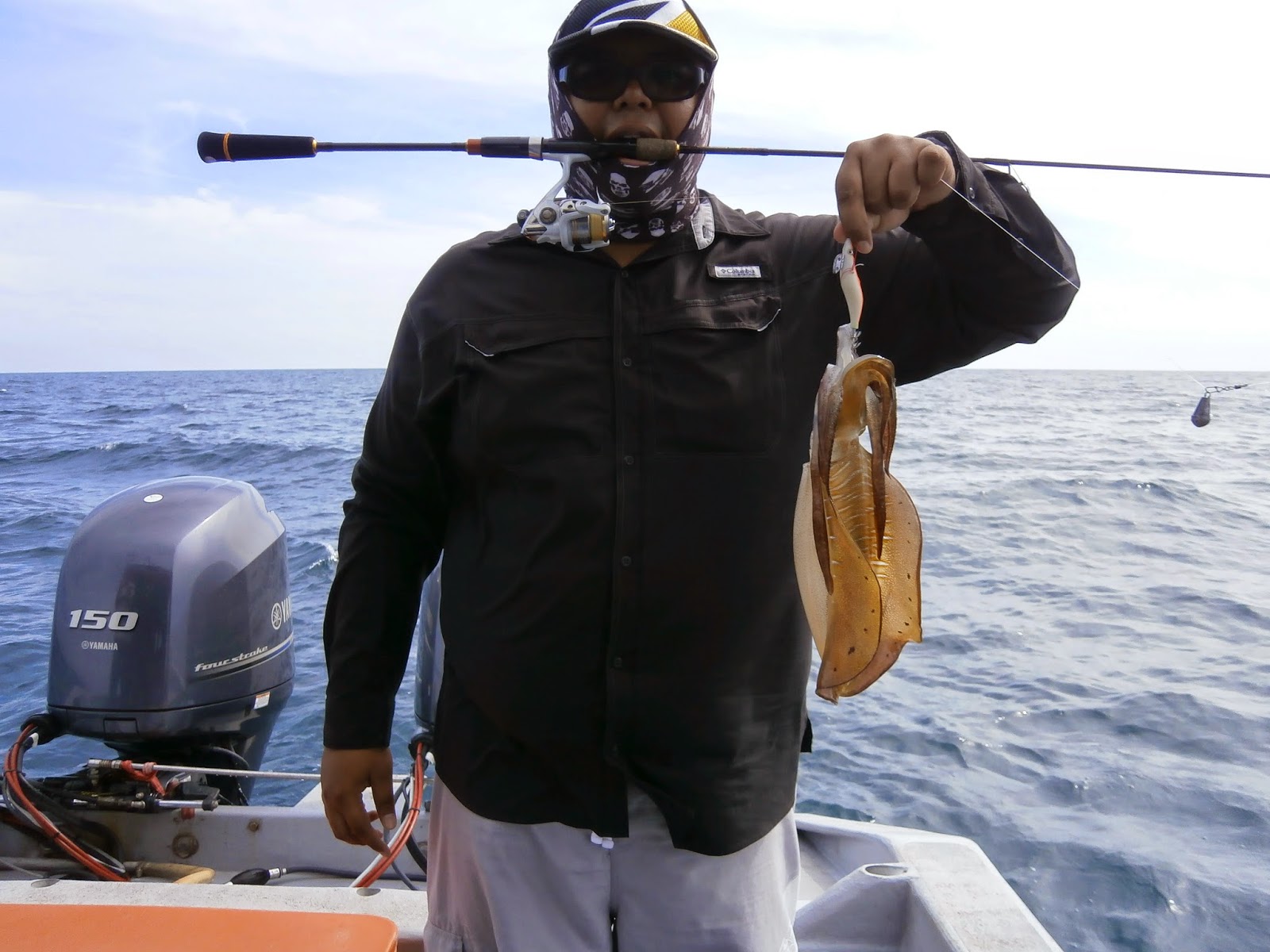 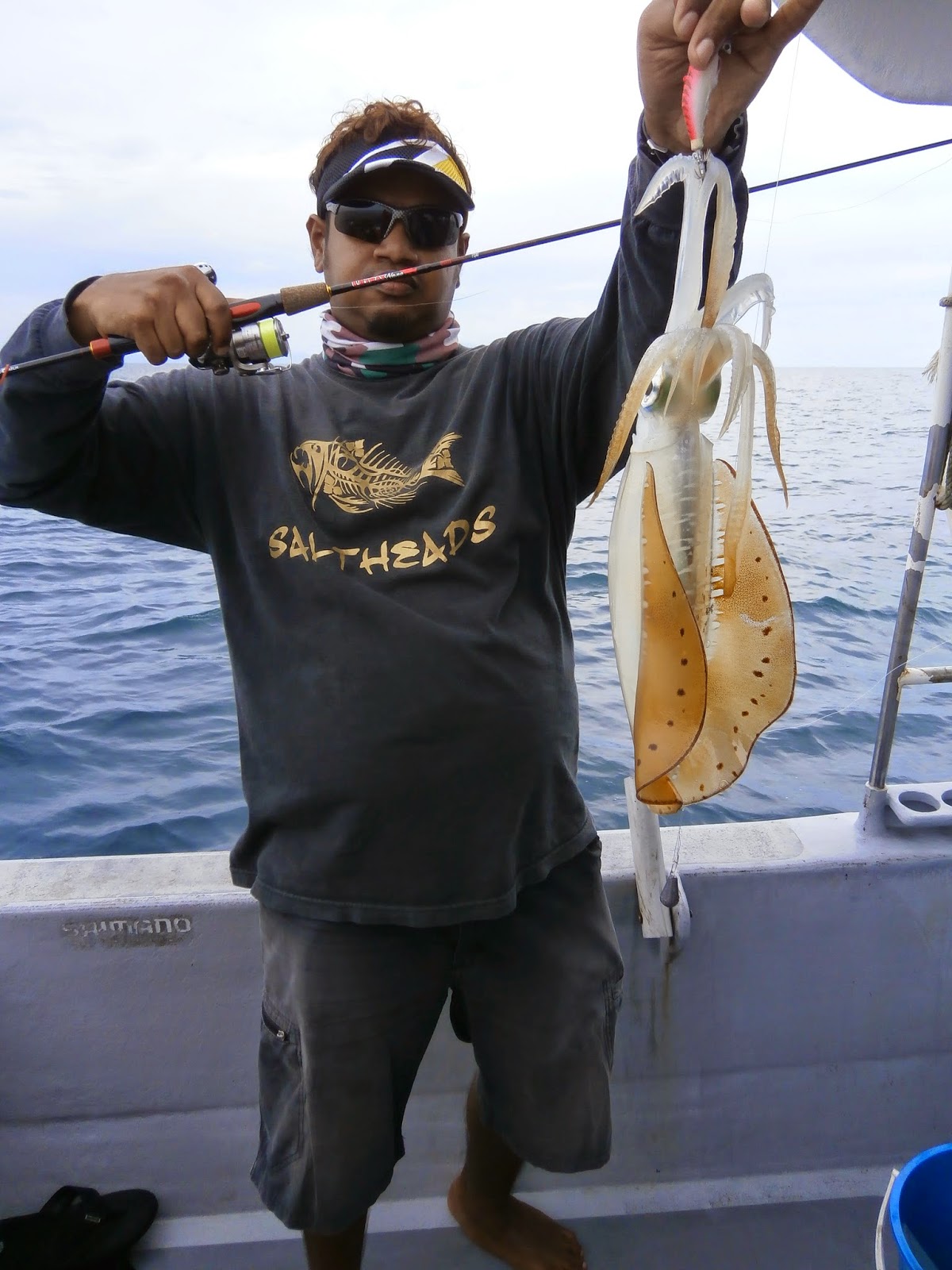 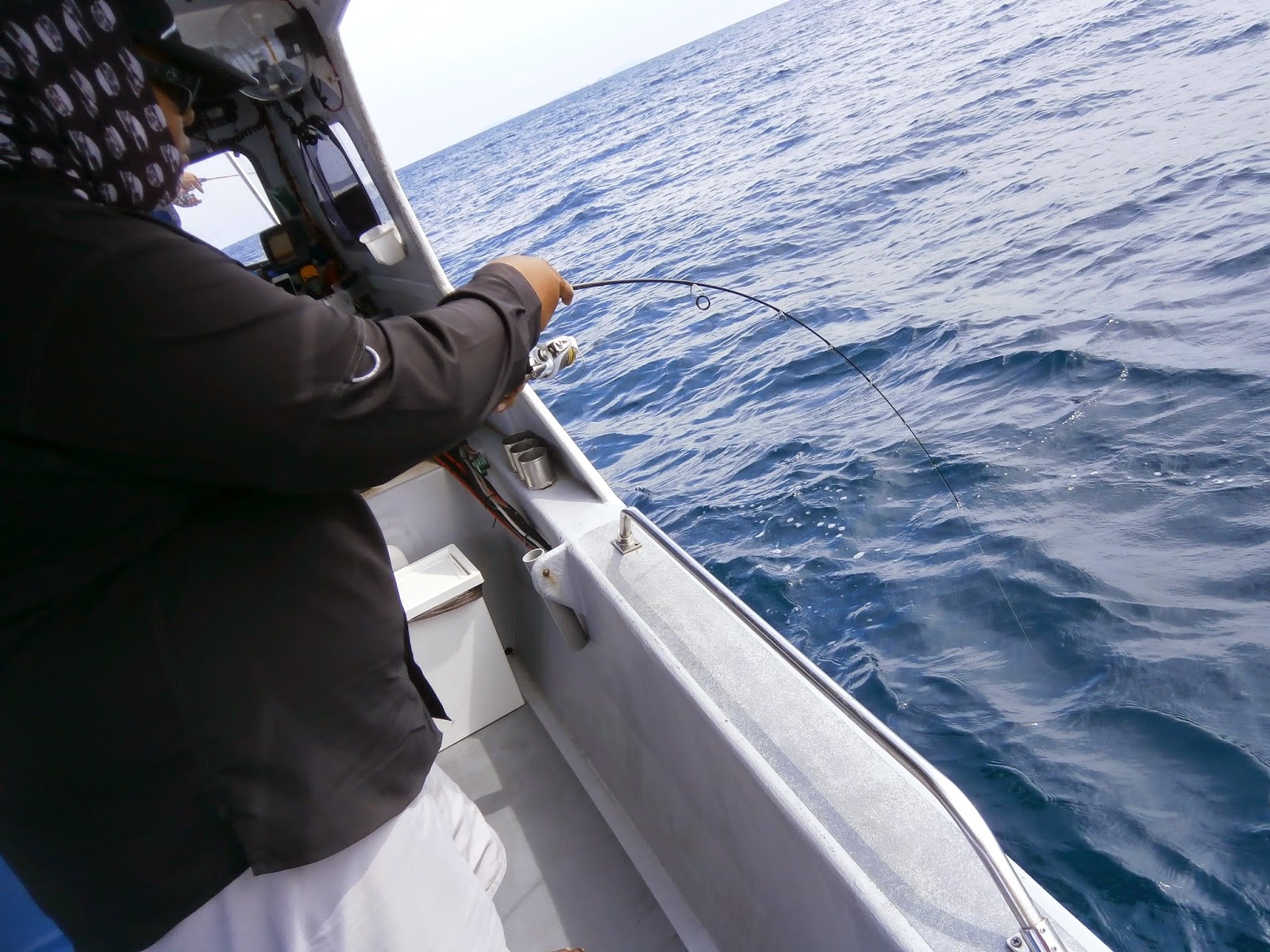 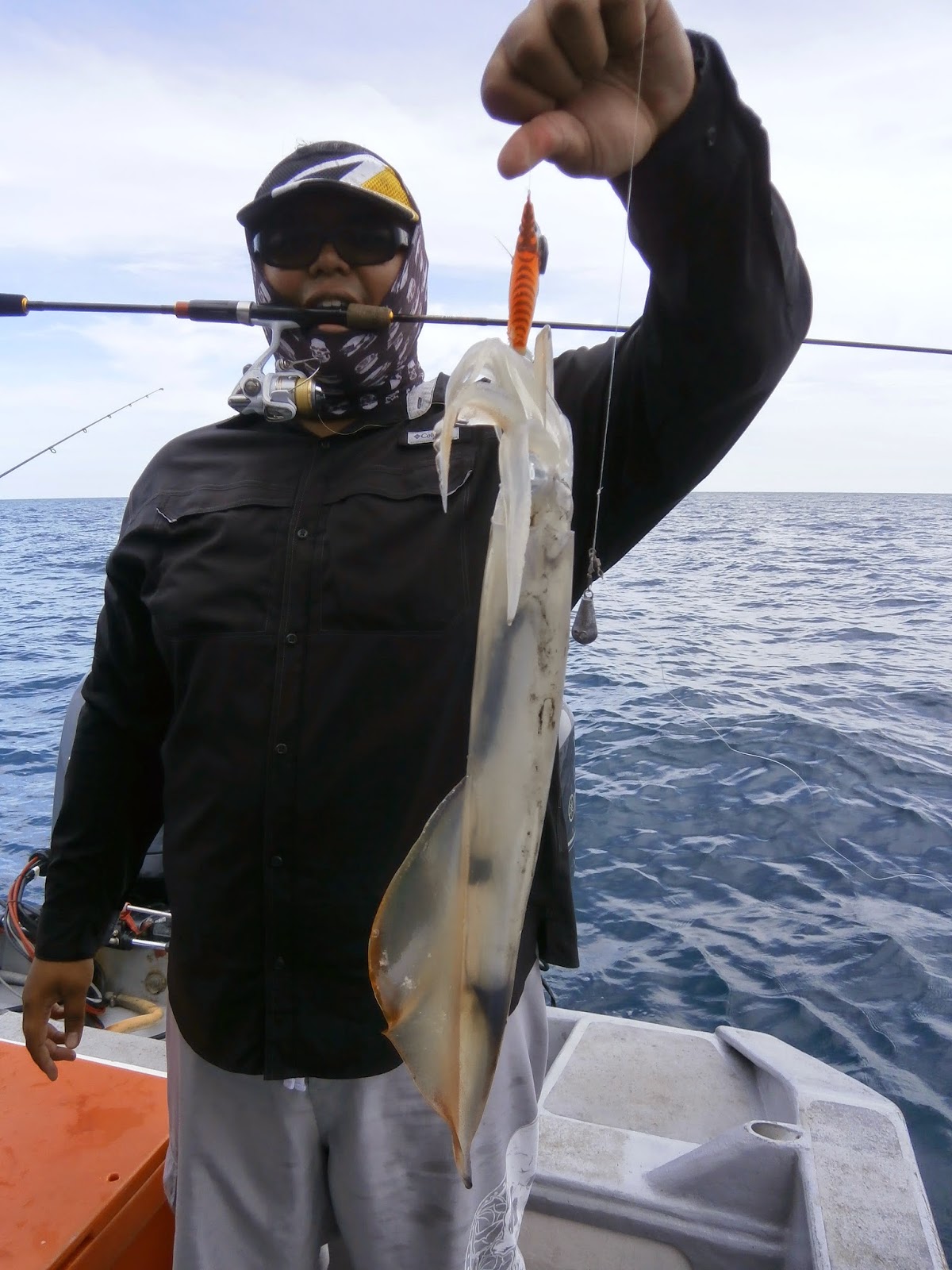 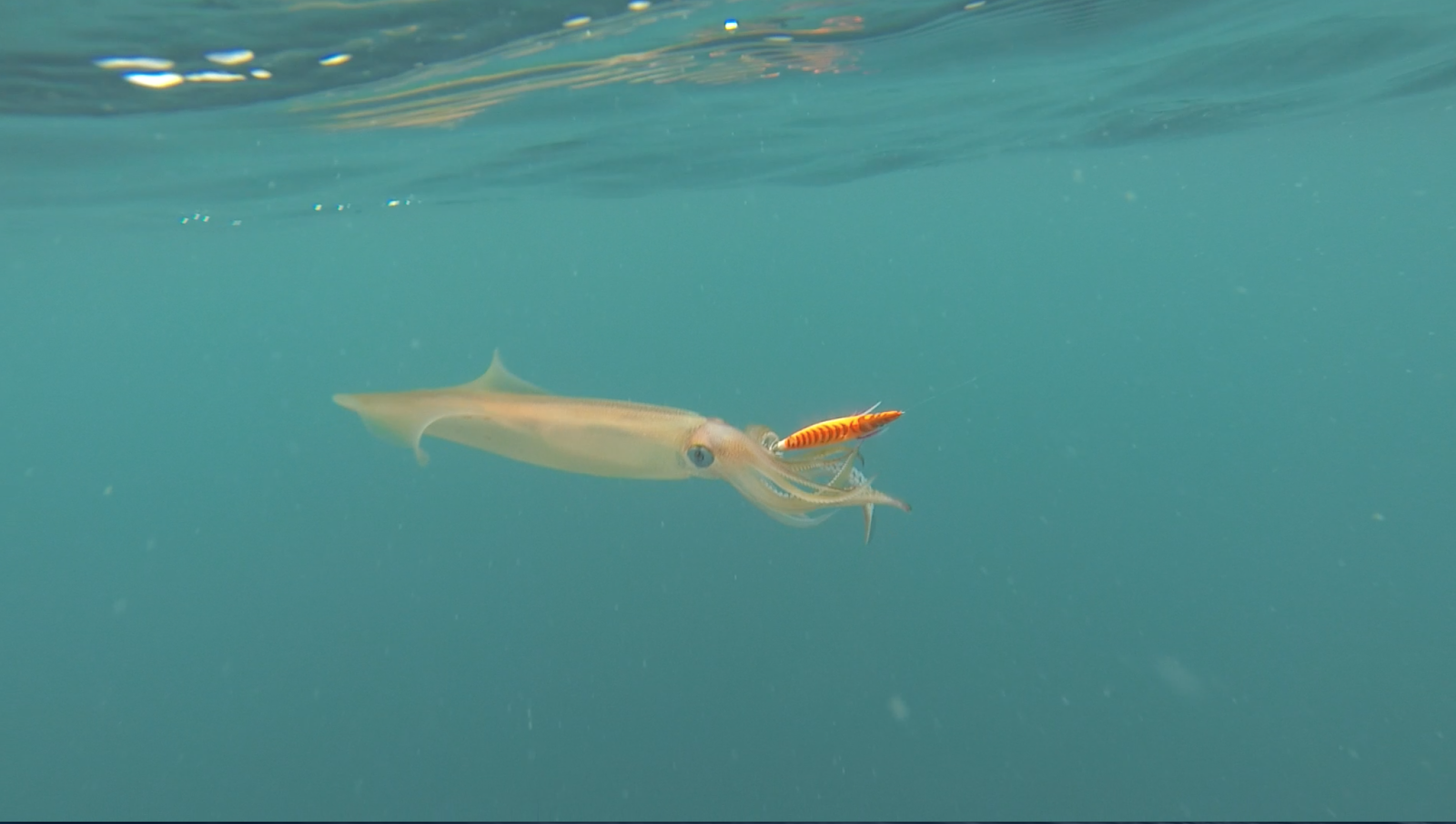 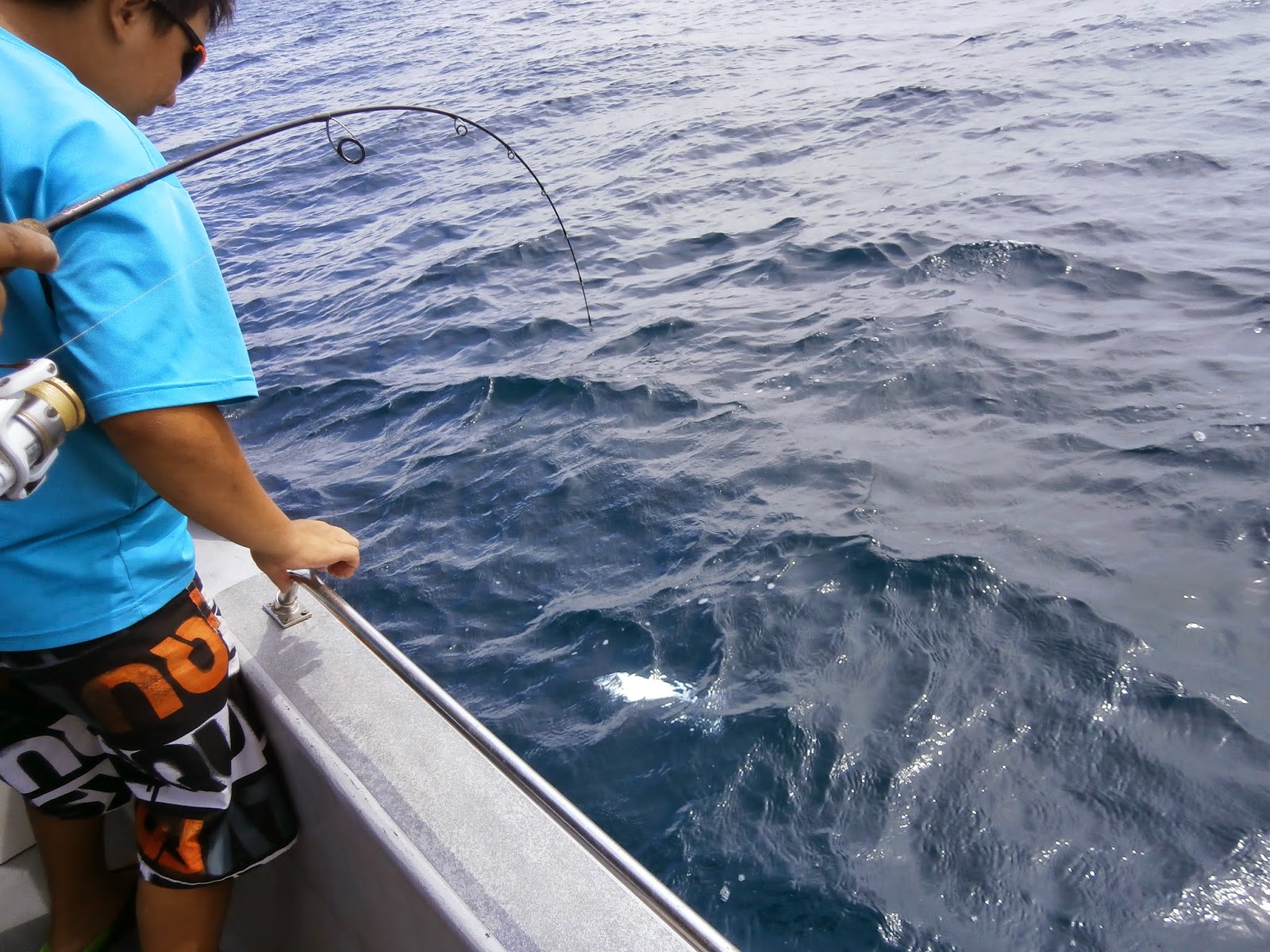 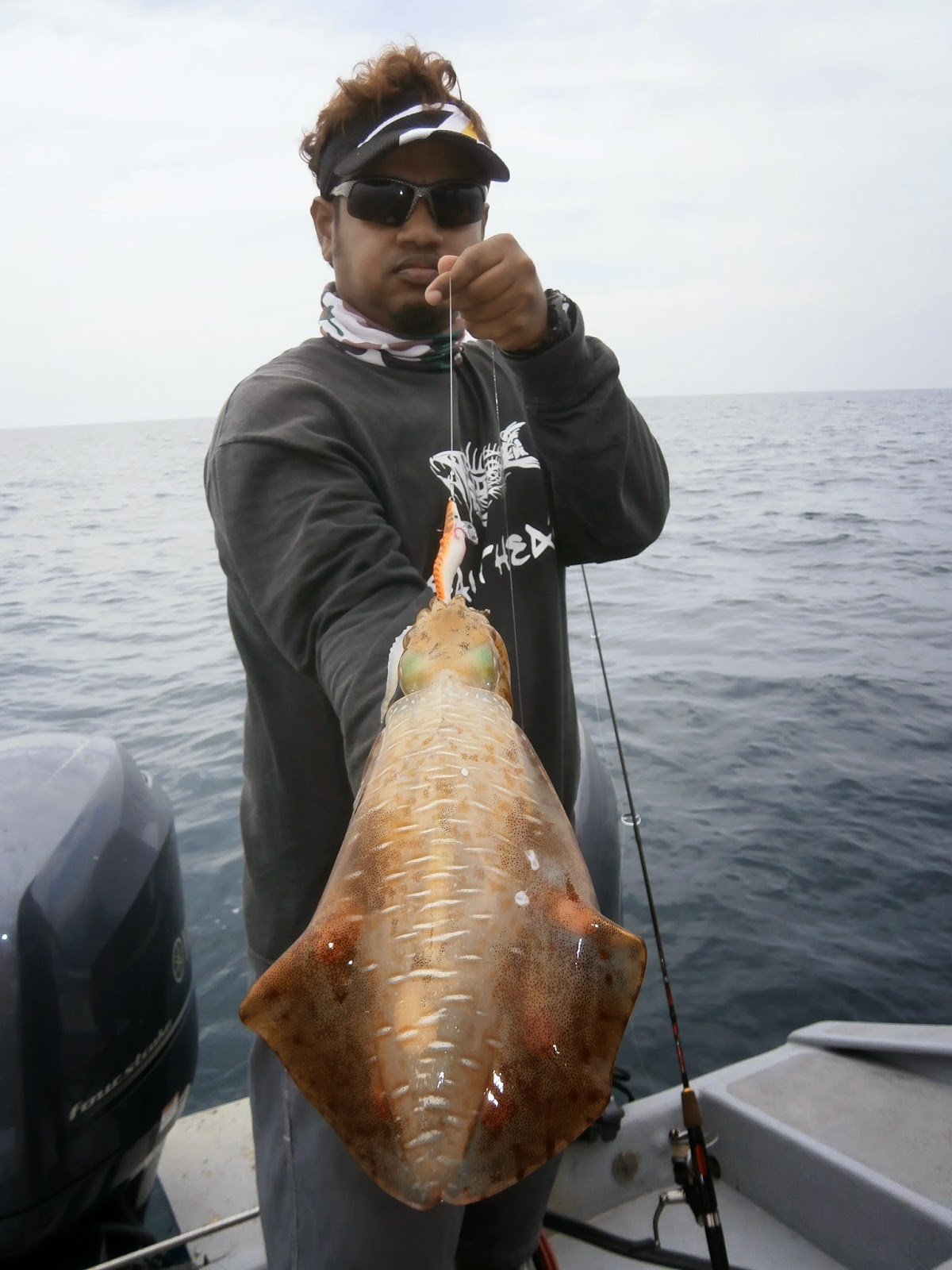 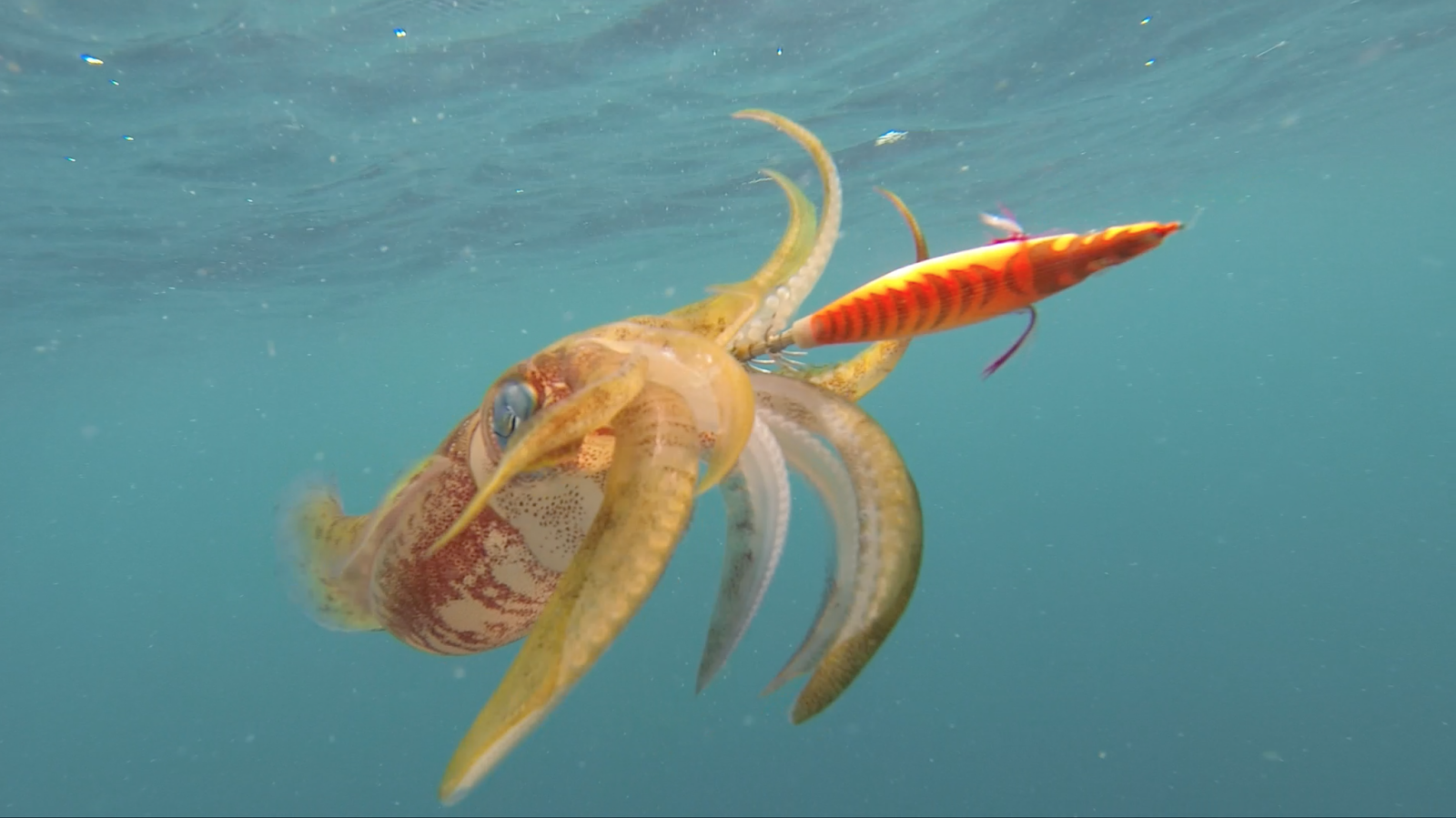 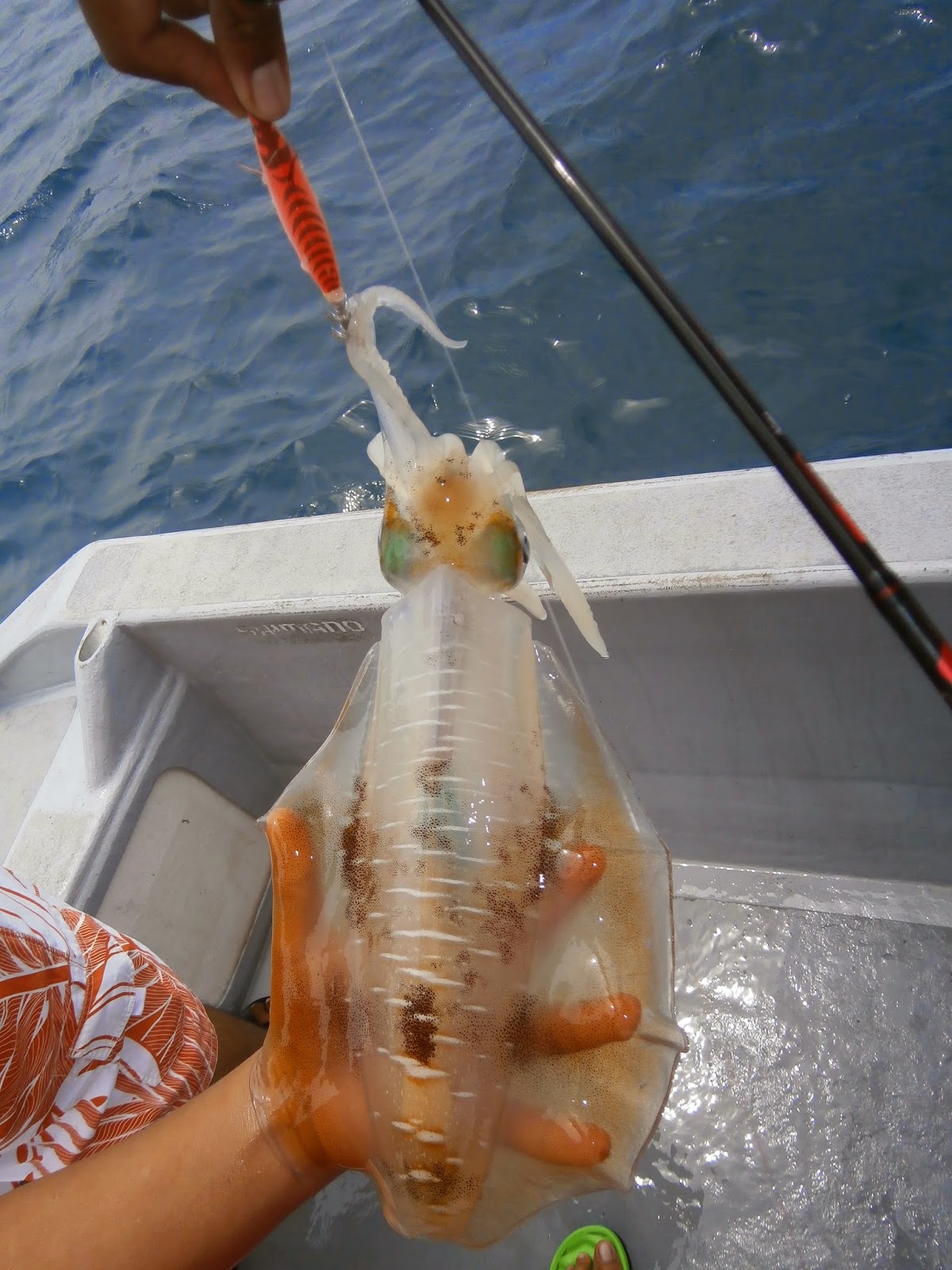 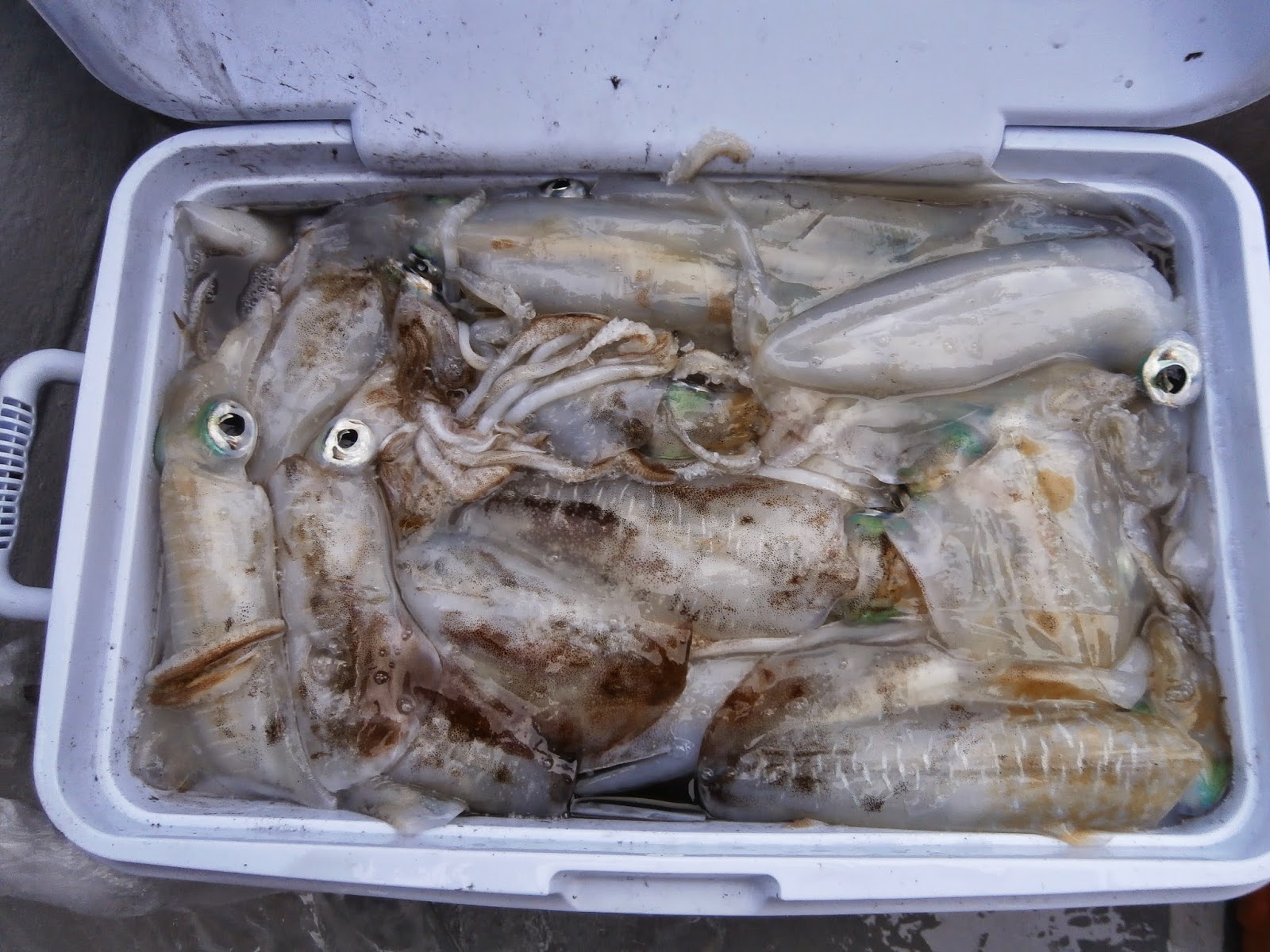