August 12, 2014
Wow, it's been almost 3 months since the last post. I do have to apologise for the lack of posts as i have been tied up with work. However, we have still been fishing. This year's fishing has been up and down due to the weather we have been having. Strong wind and heavy rain had cut so many of our trips short.

Having done a few bottom bashing trips to Desaru for Red Snapper the past few times, we asked Capt Zam if we could go jigging instead. He told us that it depended on the wind conditions. Upon arrival we were greeted with howling winds. Sensing our disappointment, Zam gave us an option. Either we called the trip off or take a long slow ride to the spot. We chose the latter. We set off after some coordinated effort to push the boat out. We arrived at the fishing spot at about 11am almost 90 minutes later.

Conditions were bad. Zam told us that we would be drifting for a bit, until the wind died down a little. Armed with our Zerek Tamers and Surecatch Monster Jigs, we waited as the boat approached the drop zone. Once Zam gave us the signal, we dropped our jigs. The current was strong and our 80g jigs took some time to hit the bottom. I had the first hit on the way back and fish on!!! It wasn't very big but it was using the current to it's advantage. Just as we were about to see colour, the fish dropped the hook. Bummer. Upon inspecting the jig, i realised that the fish had grabbed the lower part of the slim jig. I rummaged through my tackle box as the boat re-positioned again. I grabbed a single hook that is used for jigging and attached it to the bottom of the jig using a split ring.

We dropped our jigs as the boat made a second pass over the drop zone. We were using the speed jigging method with a one second pause at irregular intervals. I had a hit on the pause. Fish on!!! This time i set hard and the fish set off, almost stripping 3/4 of my Sustain 2500's 15lb Surecatch Gallant line. I hung on and after a couple of minutes the fish began to tire. I managed to get back some line before he went on a second run. I knew he was tiring out. Steadily, i reeled him back in and before long we saw some color. I couldn't make out what it was as yet. The fish tried to run under the boat twice but the Zerek Tamer held up well and i got the fish up to the surface. It was a fat Bonito. Zam gaffed it up and Hi 5's all around.  What a fish to start the day. As i was posing for pictures, Zam who had sent out a live bait on my second setup, ATC M.A.C paired with a TPSW4000PG, noticed the bait getting agitated. The next thing we knew, the rod was bent over and the reel was screaming. Could it be??? As Zam battled the fish, we agreed in unison that we had hooked up what we were targeting. A Spanish Mackerel. I still remember how Zam yelled out that he loved the ATC M.A.C Rod cos it always catches Tenggiri. I think i should get him one for Christmas!

I grabbed the gaff and readied myself as Zam brought the fish up to the surface. It was hard to balance as the boat was rocking in the choppy waters. I missed twice before getting the fish on the 3rd try. It was a beauty. Weighing in at 6kg, it got our hopes up. Jith and Oswald then lost 2 jigs in a row to these toothy fish. Then strangely they disappeared. No hits on the jigs and the live bait was left untouched. Jith and Lala hooked up a couple of small Jemuduks and Bonitos on the Surecatch Monster and Flasher Jigs, while Oswald hooked up a small Tuna (it looks like a black fin) on his Green Surecatch Monster Jig.

By 1pm the current had died down and there was no signs of the Pelagics. We employed a different jigging method with two short and one long stroke, letting the jig spiral down as we reeled in the slack line before repeating. Oswald hit a nice Grouper on Jig and i followed that up with another Grouper that was slightly bigger on the live bait that Zam had sent down on my ATC setup. The highlight of the trip would come shortly after. As my jig was fluttering on the drop after the long stroke, i had a hit. I set the hook and Fish on!!! But the fish did not run. I felt him on the end of the line but he wasn't putting up much of a fight. Puzzled, i turned to Jith and said, ' I think the fish does not know he is hooked.' I reeled in the fish quickly and soon we saw color. It was reddish. As the fish surfaced, my jaw dropped. It was a Red Snapper. He was hooked onto the single hook on the base of the jig. I stood there in disbelief as Zam netted the fish. The anglers in another boat next to us couldn't believe it either. It was a very special gift from God i guess. Lucky me!

We moved on to another location on the way back. Here, Jith and Oswald landed some nice snappers on some cut up fish. Oswald lost a biggie as it cut him off on the rocks. It was an average trip in terms of the catch. But to get most of them on jig in real difficult conditions was extremely satisfying. We are going up again in a couple of days. This time we hope the Tenggiris will show up for a fight. I miss having them at the end of my jig! Til next time. Tight Lines! 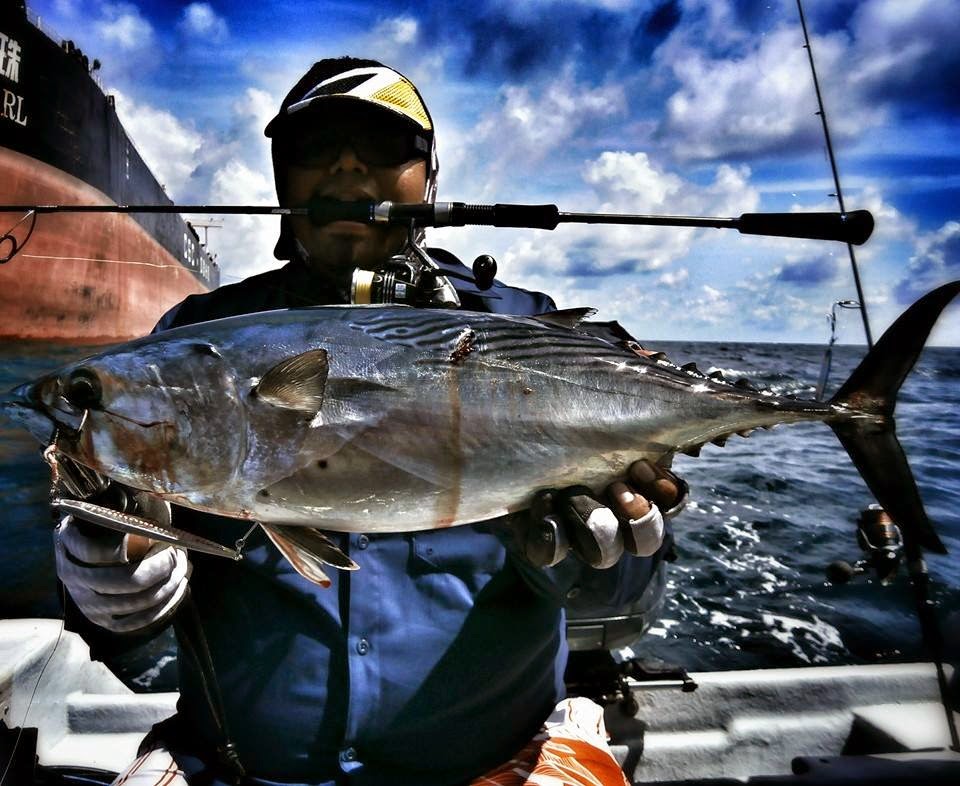 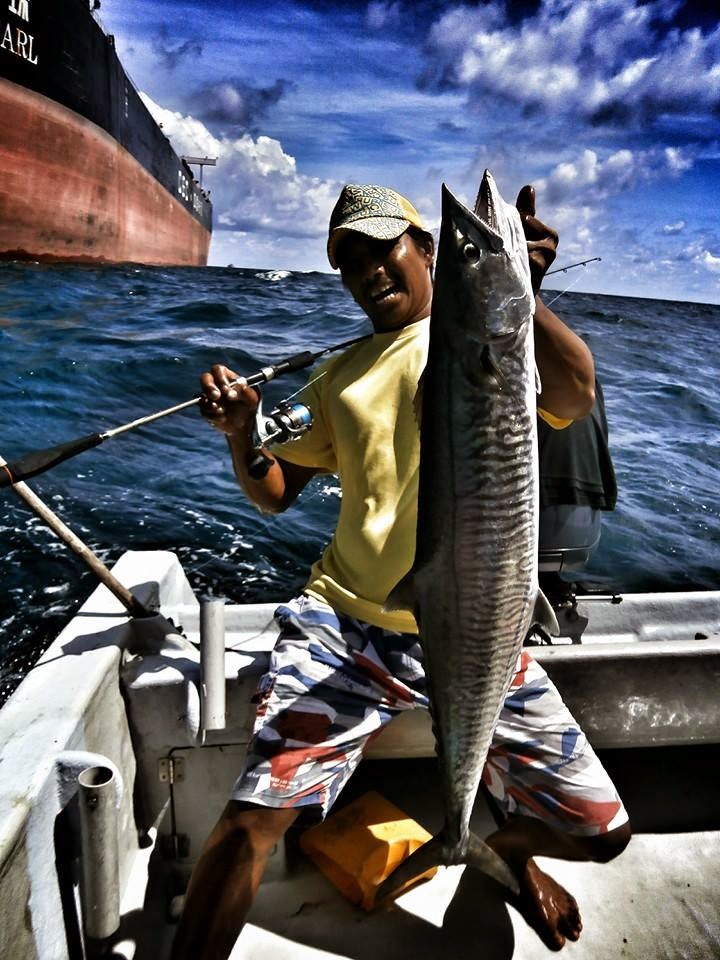 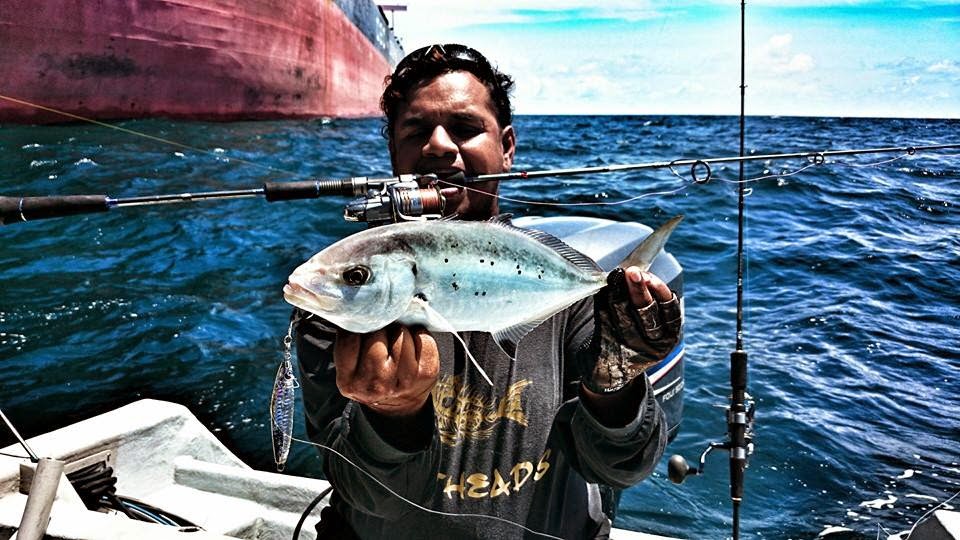 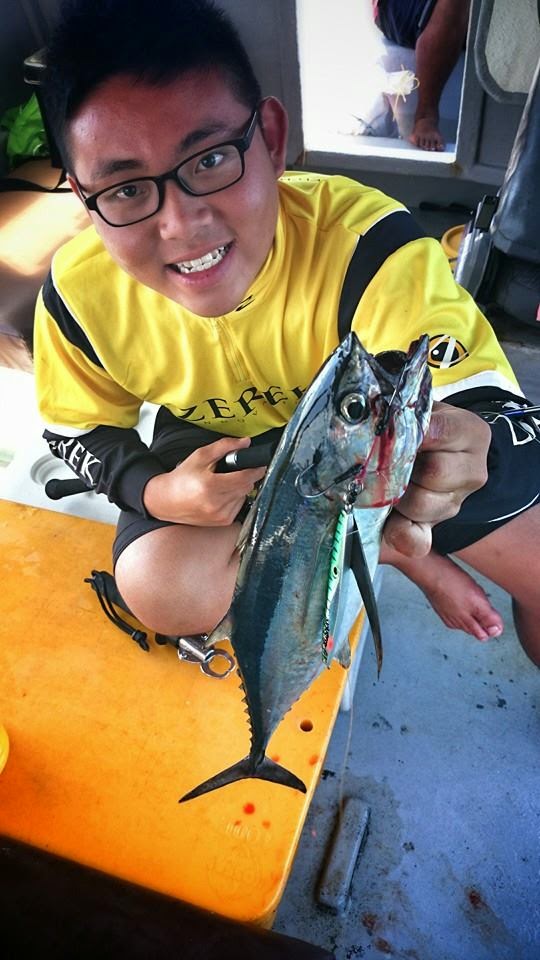 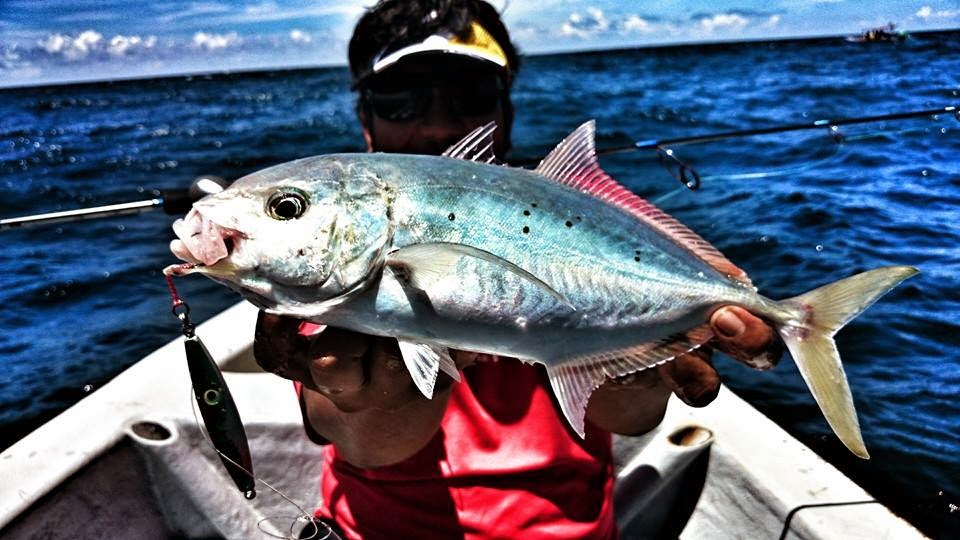 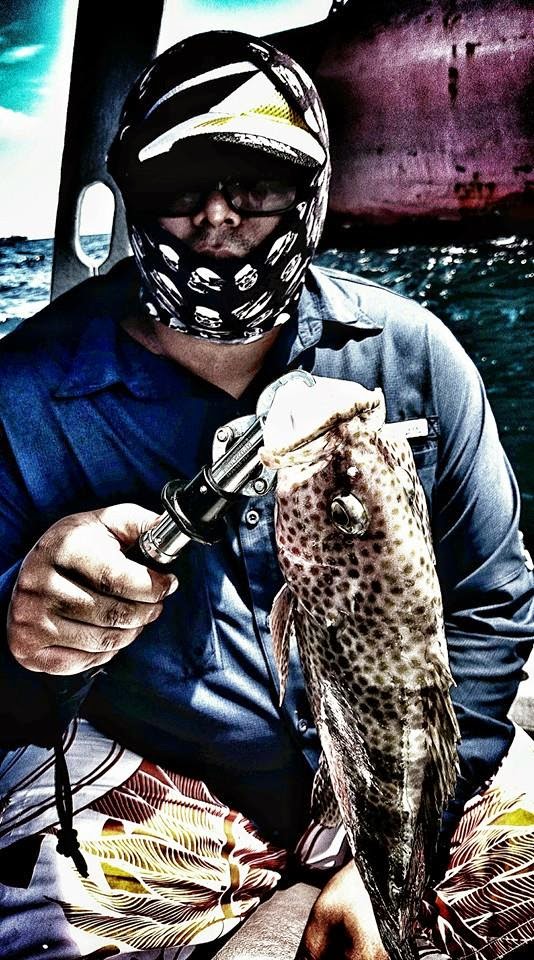 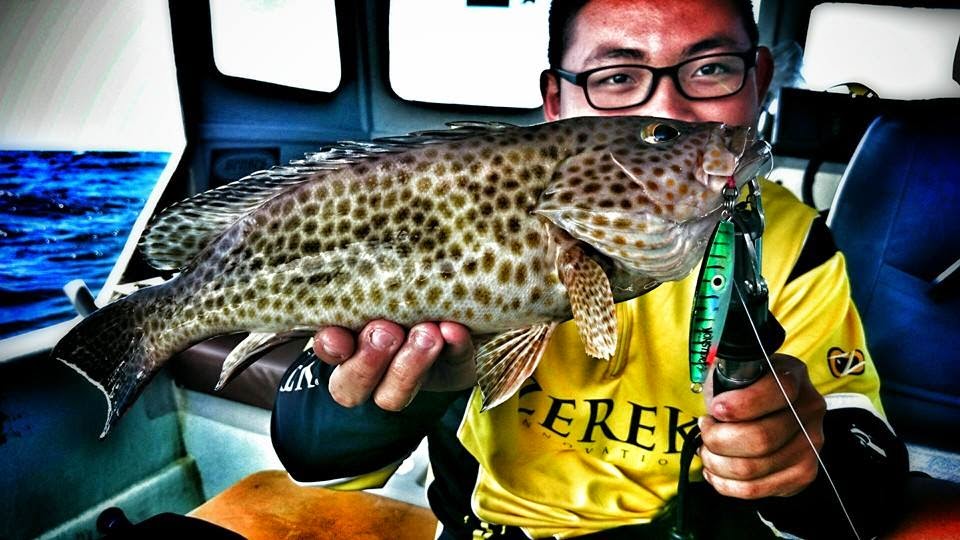 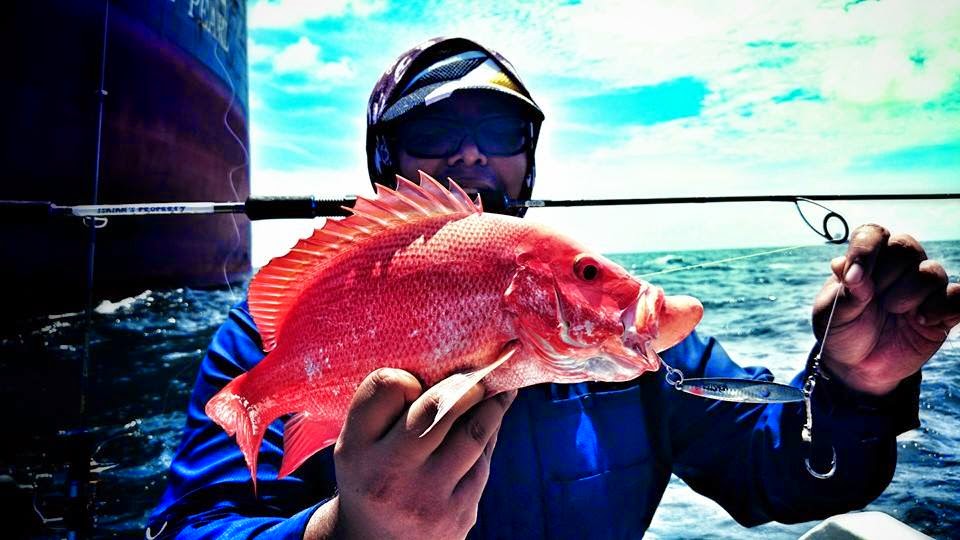 Adwin was also in Desaru fishing with his Dad and friends on Uncle Sam's boat. Unfortunately, they ran into some bad weather and decided to call it off half way. He still had an exceptional fish on jig. A Spotted Mackeral on the Surecatch Flasher Jig. 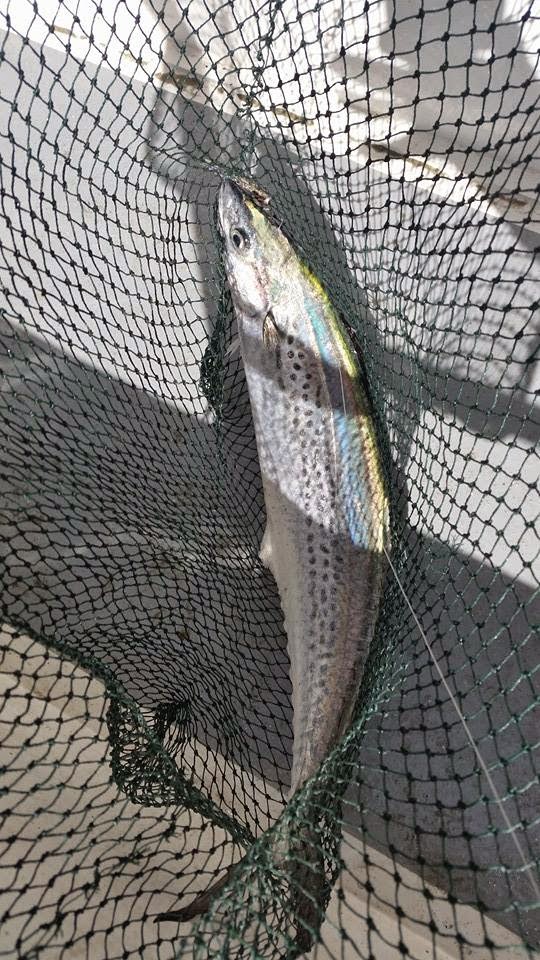