May 19, 2014
Lala, Samuel, Lemuel and i headed to Rompin a couple of days ago. We were going to fish in Tioman with Rompin Siong. However, a day before the trip, the captain called to inform us that he would not be able to take us fishing as he had to settle some family matters.

Unsure of our new boatman's experience, we set off with low expectations. Upon arrival, the boatman's hp was turned off. We got through to him after we had made a call to Rompin Siong. Met up with the boatman at 7.30am. He was pretty young and spoke very little english. ( lucky for me Lala, Sam and Lem all speak fluent Mandrin) We had some noodles for breakfast and bought our supplies before boarding the boat.

We were introduced to our deckie who was even younger than the Captain. We set up our gear quickly and set off. We were told that we would be stopping at an Unjam before heading to Tioman. Upon arrival at the unjam, we were faced with a difficult situation. The boat had been tied to the unjam with the back facing the current. The jigs were drifting beneath the boat. even if we had a hook up we would face some difficultly as the fish would mostly run with the current.

Not wanting to kick a fuss and get off on the wrong foot at the start of the trip. We spread out. Lem was our front casting with his Duel Hardcore, while the rest of us were jigging off the sides. Within a couple of casts, Lemuel was on. After controlling his fish through a maze of unjam ropes, he brought up a Spanish Mackerel. It weighed 6kg and it went into the cooler. Sam tried Jigging upfront and hit a smaller one shortly after. After some time, we moved towards another unjam.

This time, the Captain wanted to borrow a rod for live baiting from the back. I passed him my ATC M.A.C rod that was paired with a TP SW4000PG. The rest of us continued jigging while he sent out a baitfish with a balloon. No hits so the captain told us to have lunch. I stayed at the back of the boat while the rest ate. Once one of them was done i went to grab some food. As i was about to open my packed food i saw my rod bend and stay, but no line was going out. I dashed over and picked up the rod. It seemed like it was snagged. The Captain was along side me and he grabbed the line and gave it a tug. Fortunately he let the line go. The line began to peel out of the reel. We looked at each other and uttered 'Sail!' The captain told the Deckie to start the boat as the rest scrambled to clear their lines. Then it jumped. 'MARLIN! ' the Captain yelled. It was a juvenile and i did not have any trouble controlling him. In fact i was surprised how quickly we brought him in with the PE 2 ATC M.A.C rod and TP SW4000PG. Captain told me i was lucky.

The deckie grabbed the bill as i readied for the photo. The fish was still slightly green. After a brief struggle, we got him up for the photo. His guts were hanging out and that was strange as he was hooked at the side of the mouth. I learnt later from the Captain that Marlins and Sailfish will try to throw up what they have eaten in order to free themselves. Care has to be taken to place the guts back in properly and the fish has to be revived by holding it while the boat moved. 5 minutes later, the fish was ready and it sped off.

I had my lunch as we went to Tioman. The captain told us that once a Sail or Marlin comes to the unjam, the Mackerel will move away from there. Interesting piece of information. We arrived at Tioman to see some boiling action. Once again, we were let down by the positioning of the boat. The front of the boat facing the feeding frenzy. The frenzy moved out of our range and we headed further in. We arrived at a spot where the fish finder was going crazy. We were marking fish everywhere the boat drift. Strangely no hits. I changed to a micro jigging set up and saw the fish follow the jig up to the surface. The boatman hit a jemuduk while Lala hit a Sagai. I caught a couple of groupers but i released them as they were too small. The boatman got a Coral Trout which was pretty small but he decided to keep it for dinner with another grouper which Lemuel caught. Lemuel then hit a good sized Boon Nang on my Surecatch Ultrax Nano and Stradic 1000 set up. It was fun to see him being bullied as i had loaded 4 lbs braided and was using 12lb leader. Eventually, he brought the fish under control and it turned out to be the last fish of the day.

We went to Tioman to spend the night. The owner of the chalet came to pick us up in his truck and sent us to the chalet which was 5 minutes away. The room was clean and air-conditioned. The 4 of us shared a room while the Captain and deckie shared one. The toilets were outside and were clean. They also had hot water. We washed up and went for dinner. Then we stopped by DFS for some Chocolates. No one was in the mood to drink. But Lala and Lem grabbed a beer anyways. A short while later i fell asleep.

Woke up the next morning, and we were taken to a road side stall for breakfast. The roti canai was good. So Sam and i had round two. :D We set off shortly after. The target for today was Spanish Mackerel.  We reached the fishing grounds, which looked familiar. ( it was where we were fishing the day before) The Captain sent out 2 lines out with live bait while the rest of us were jigging. 2 hours in i hit one similar to the size Sam got the day before. And that was it.

We moved to another spot and Sam hit a small Dorado on Pintail before the fish shook off the lure with a couple of jumps. The live baits were sent out, as dark clouds appeared on the horizon. Then suddenly, my rod with the live bait did the bend and pause like the previous day. The boat man looked at me and said, you are damn lucky. This is another Marlin. He set the hook and passed me the rod. I called Sam to have a go. (He has never caught a sailfish before) This one was bigger than mine and i guided him through the fight. He got the hang of it pretty quickly. Keeping the rod upright when the fish ran and reeling when it stopped. Keeping the rod tip low when it jumped. He brought the fish in and the deckie grabbed it. Photo Time. We released the Marlin after reviving it and it swam off.

We moved to the unjam where i caught my Marlin the day before. We sent out the live baits and we were in for a treat. The Spanish Mackerel were around and hungry. One after another we took turns fighting the fish. We lost a few which bit through the wire! No time for Videos or Pictures. We even had double hook ups. We had a total of 12 hook ups in an hour. Thats like one every 5 minutes! Then suddenly a big group of birds appeared and were flying towards our lines. There was a frenzy below the birds. We waited with anticipation as the frenzy drew near. We were on! A Sailfish! But the deckie made a mistake and we lost the fish. He forgot that we were not using circle hooks.

Lala who had been jigging all along finally landed a strange looking fish. No zeros for both days. I guess we were lucky. We headed back feeling satisfied. At the Jetty, we saw some of the catches from the other boats. I guess, the catch at Rompin is not what it used to be. We'll be going up again in July with Rompin Siong. Hopefully there won't be any more hiccups. :)

Video is at the end of the Photo. 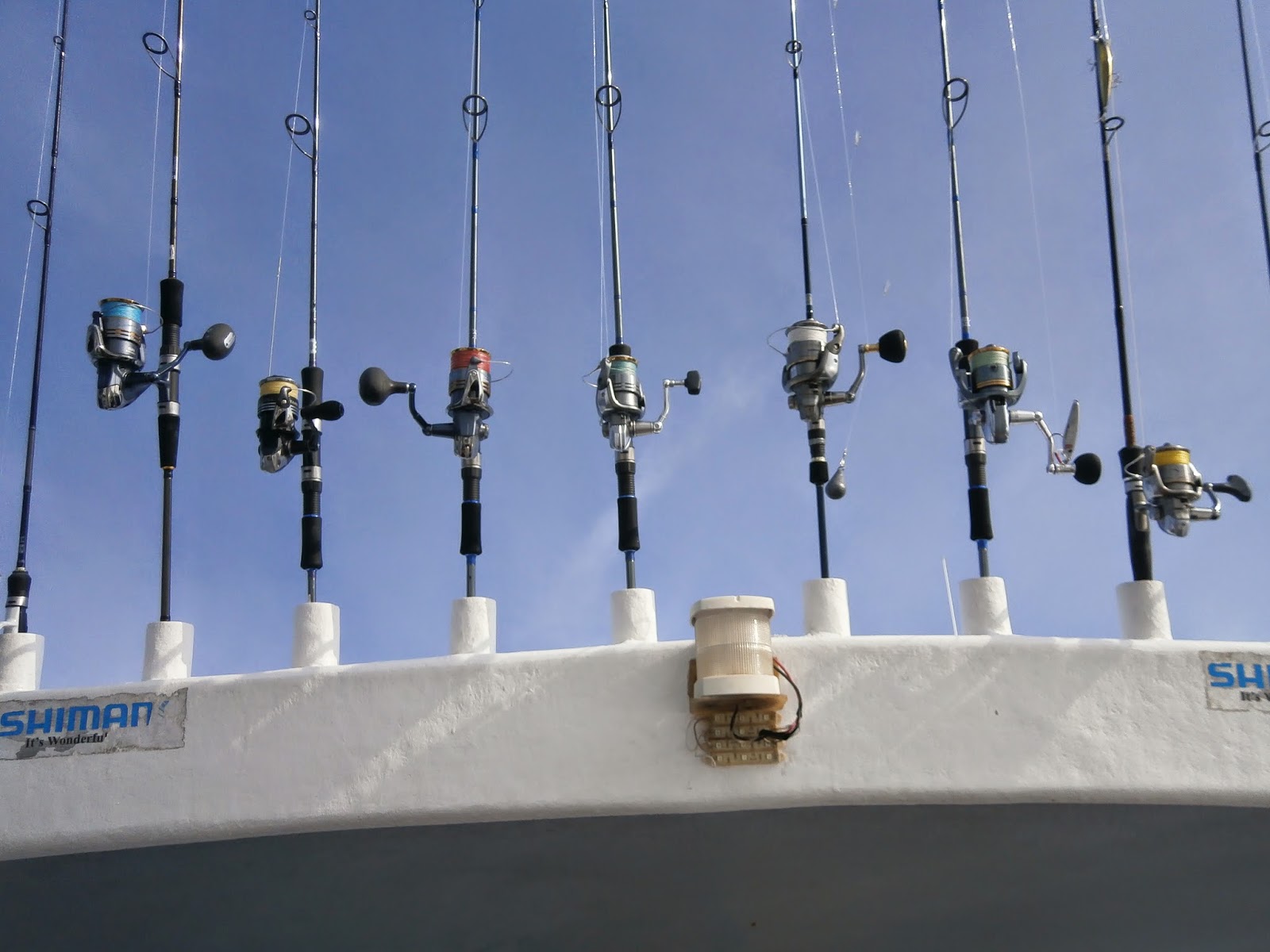 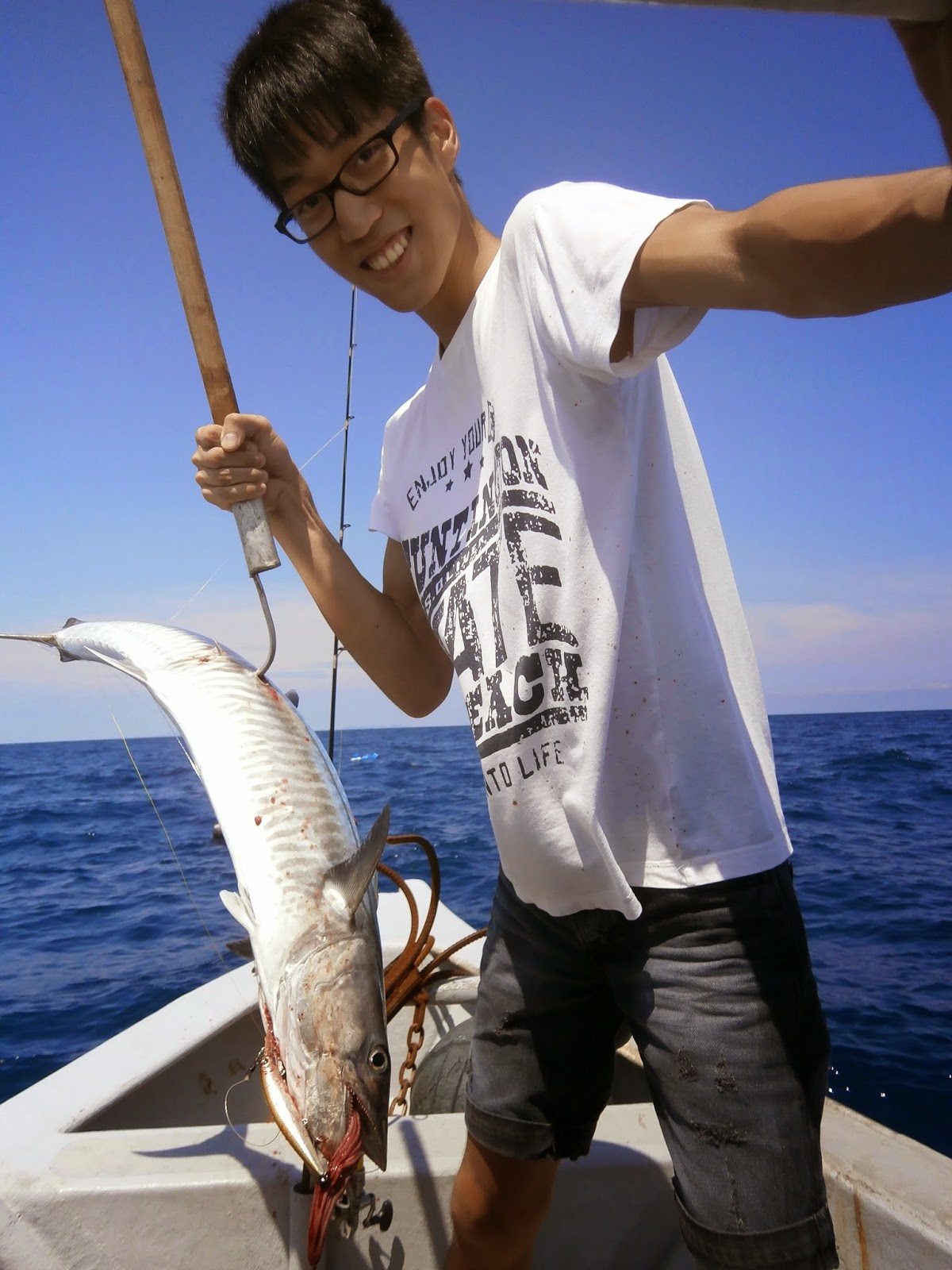 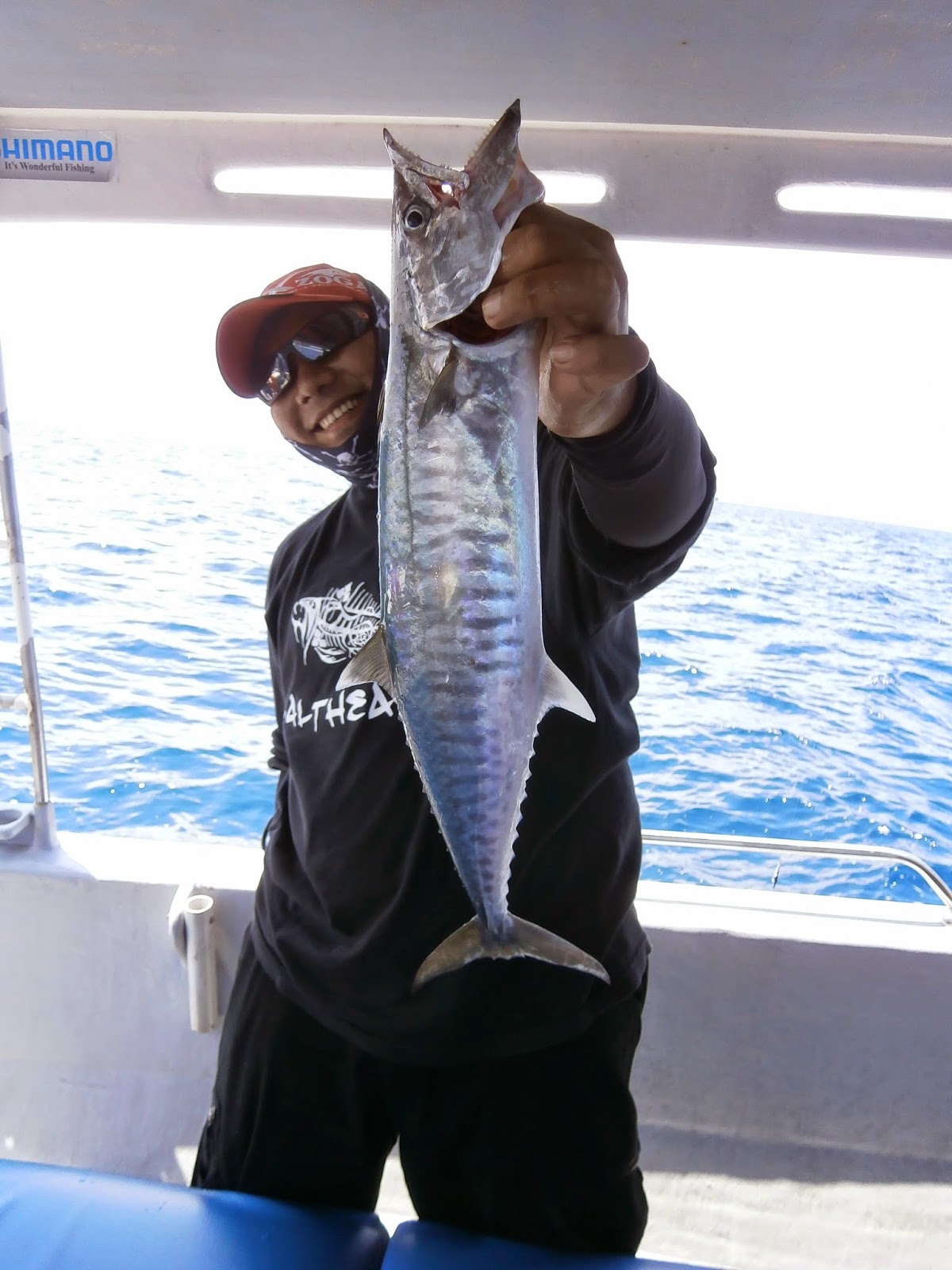 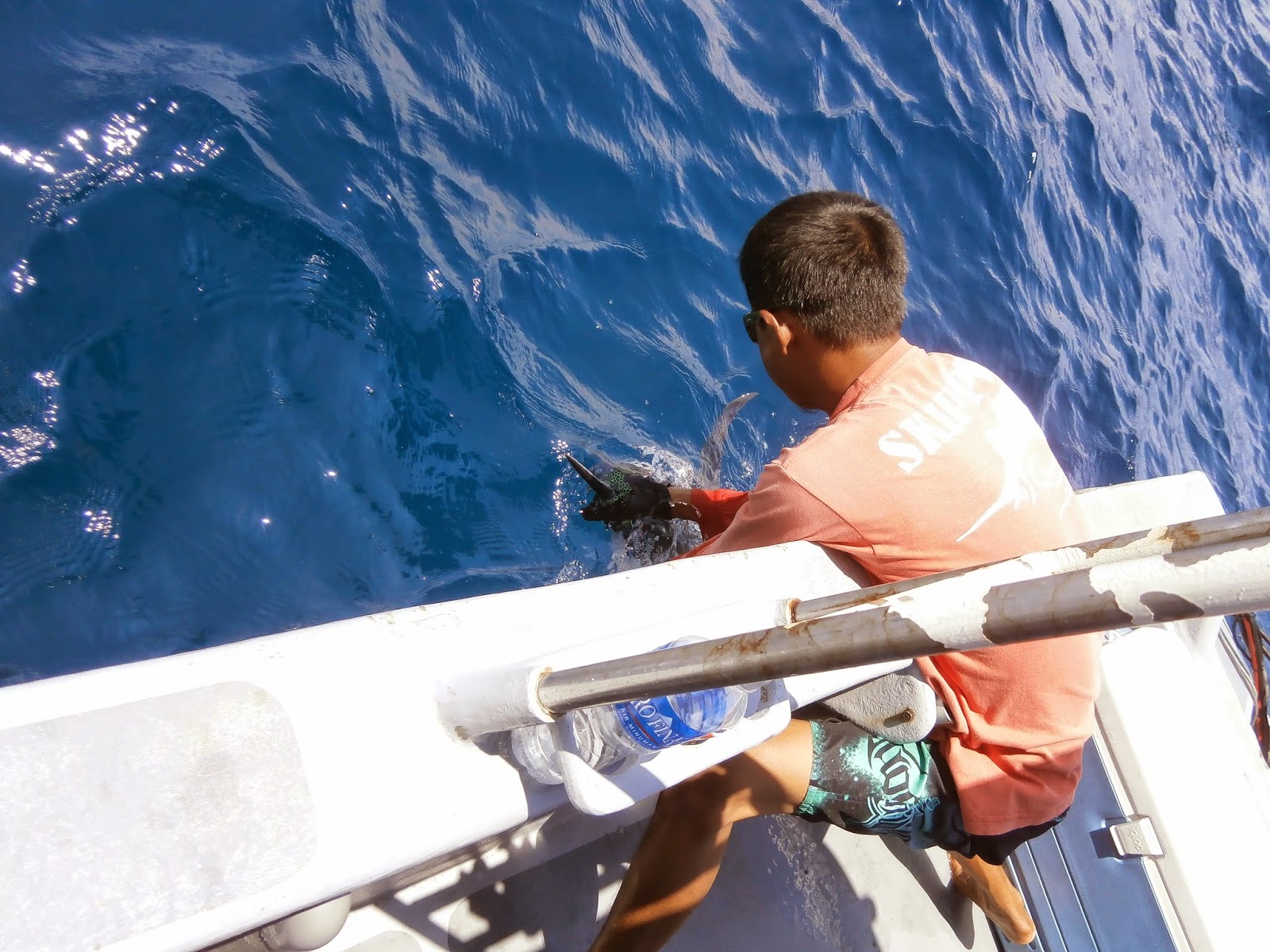 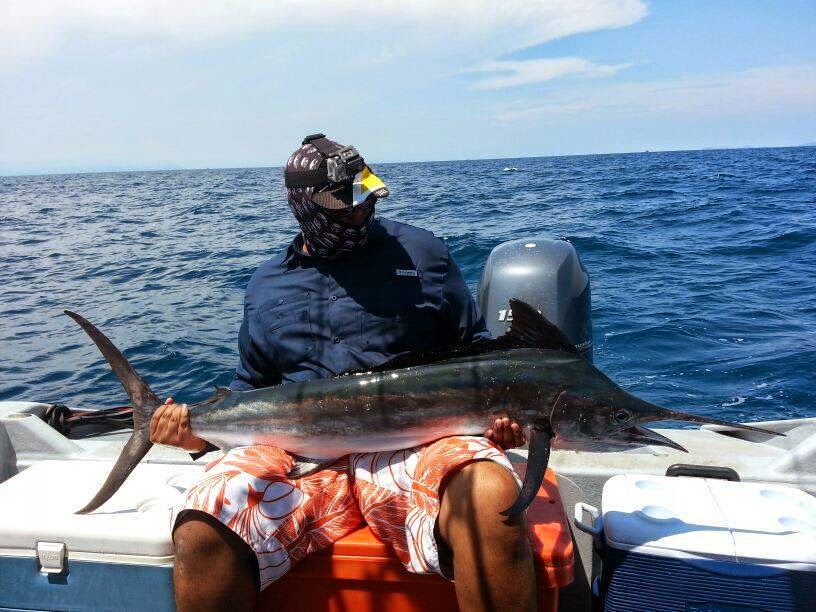 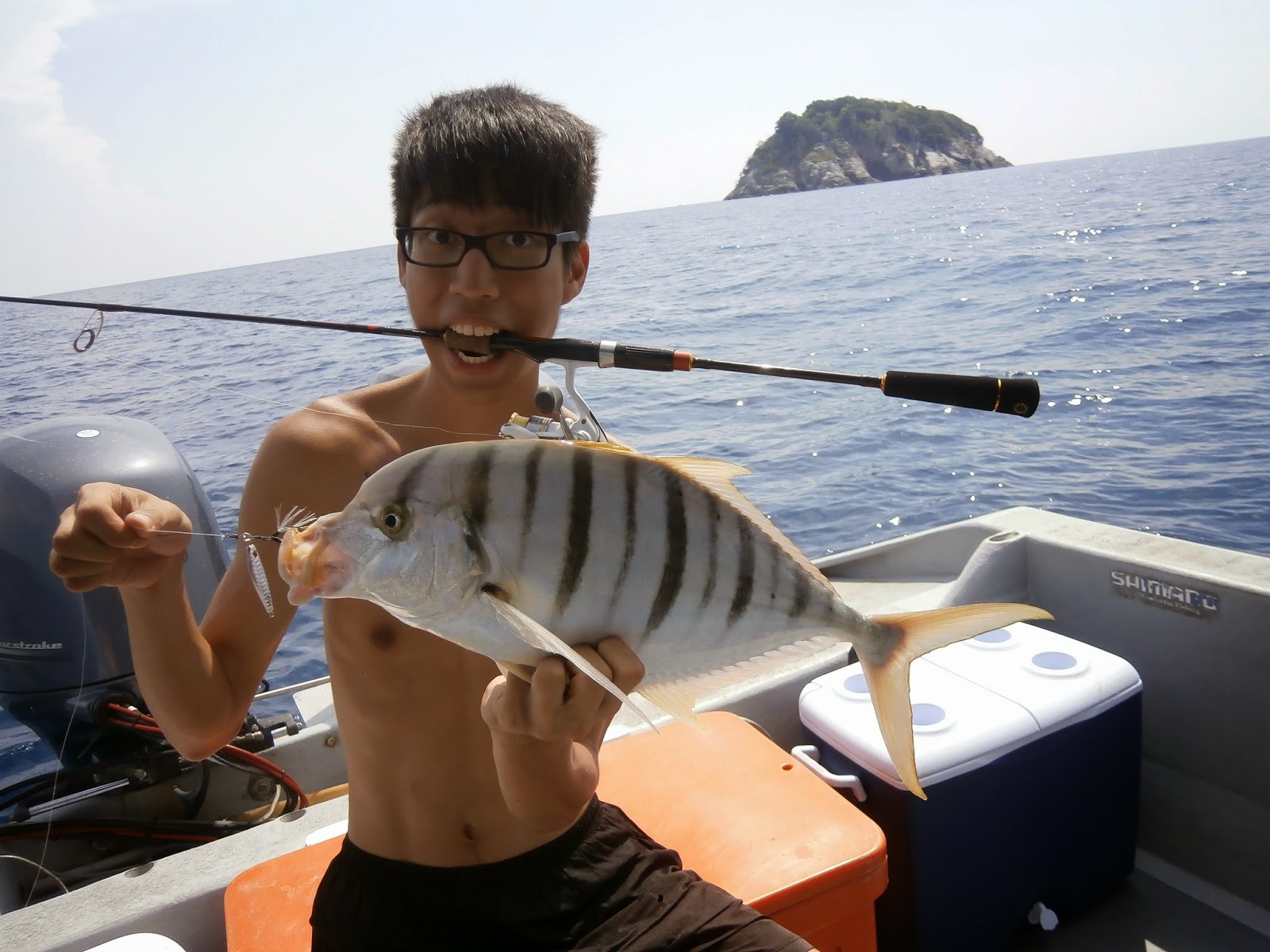 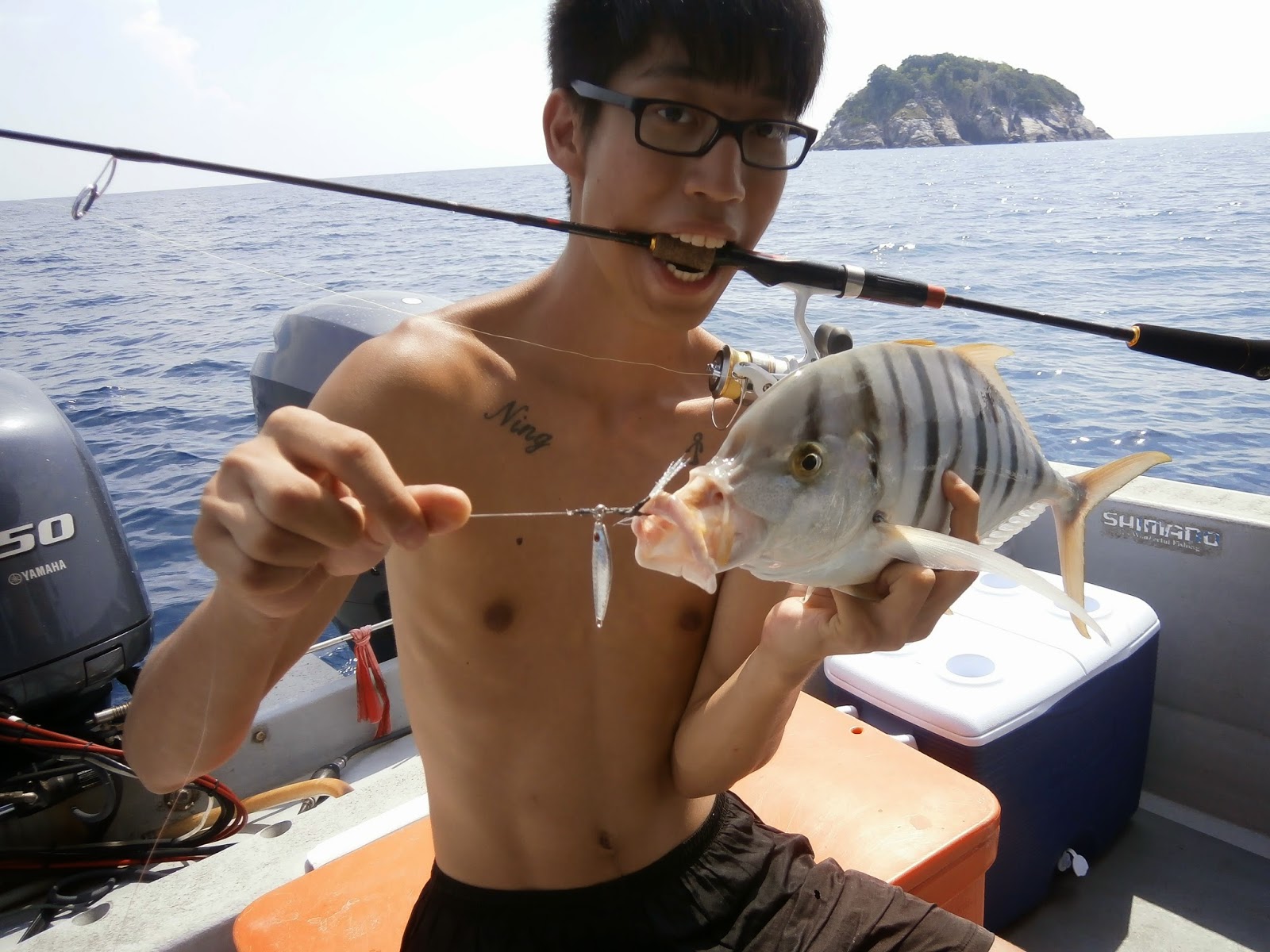 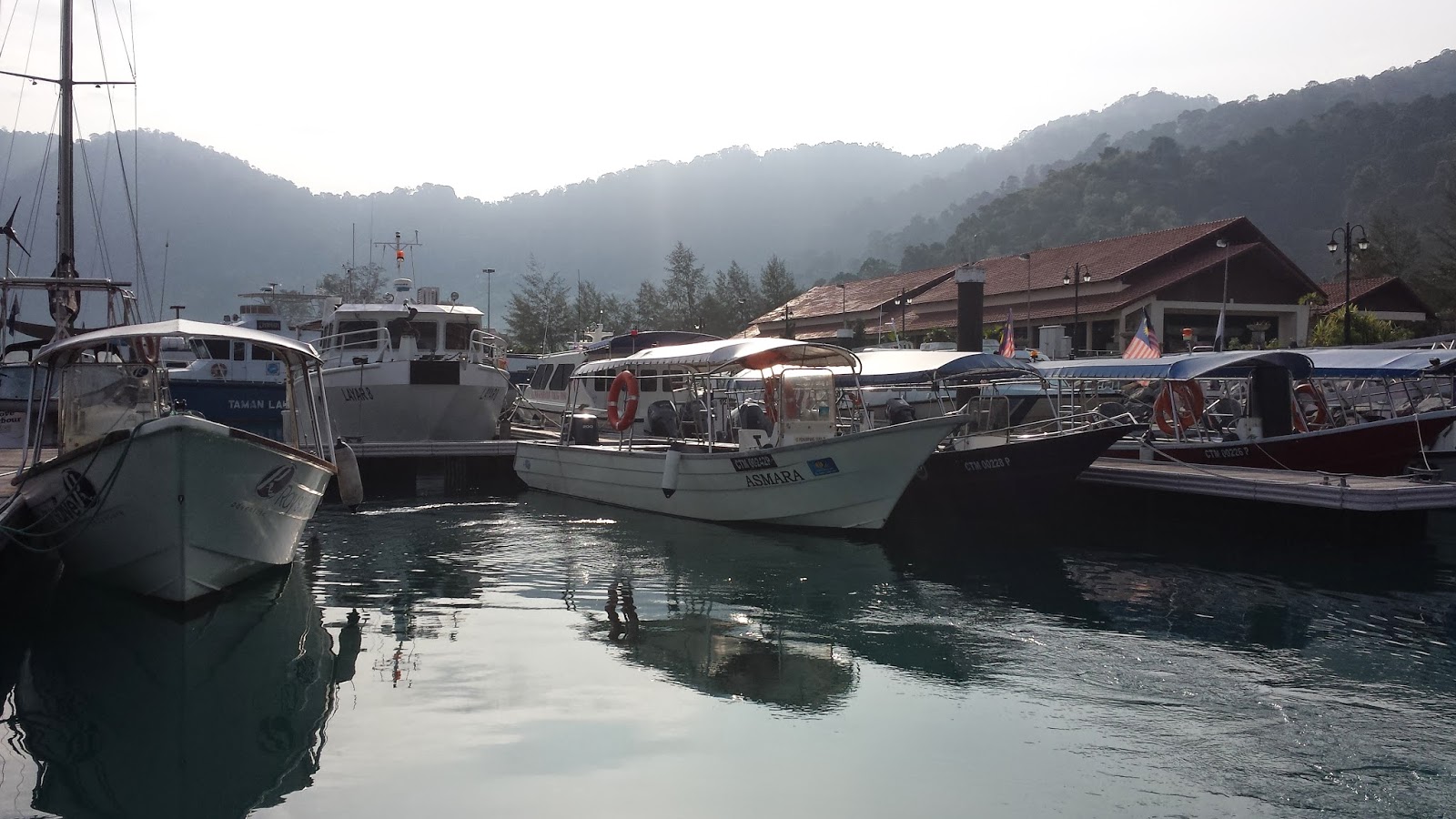 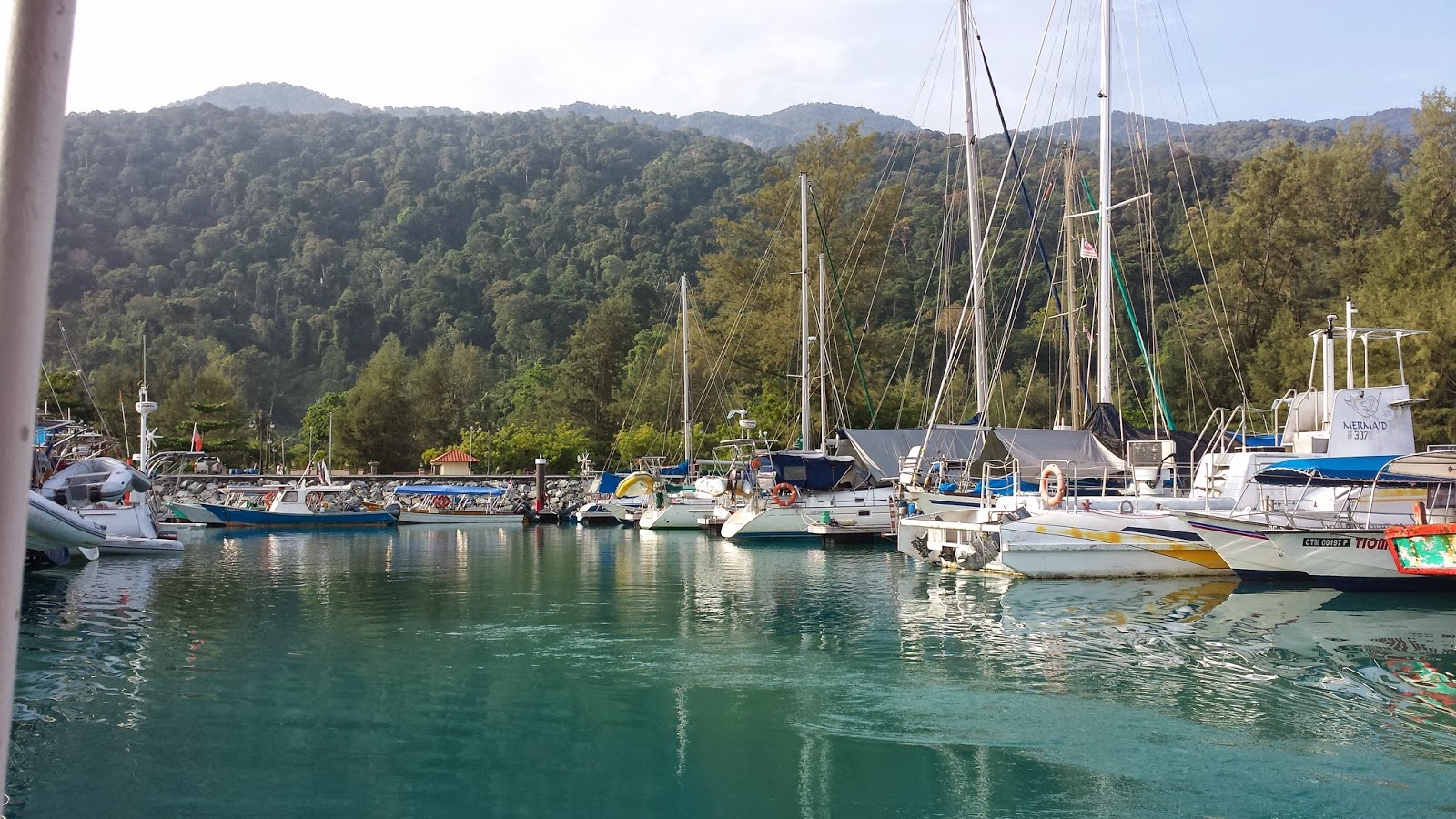 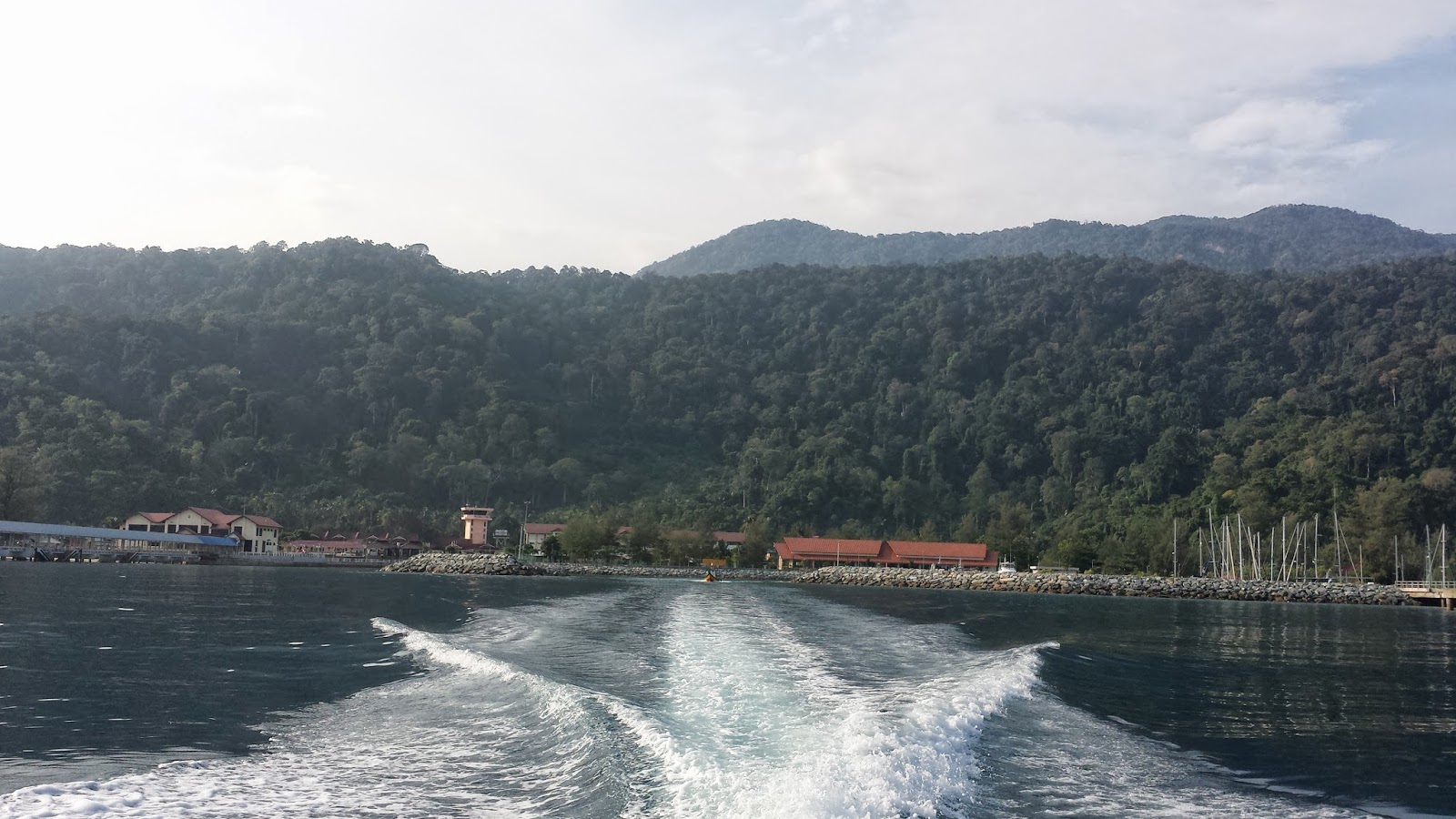 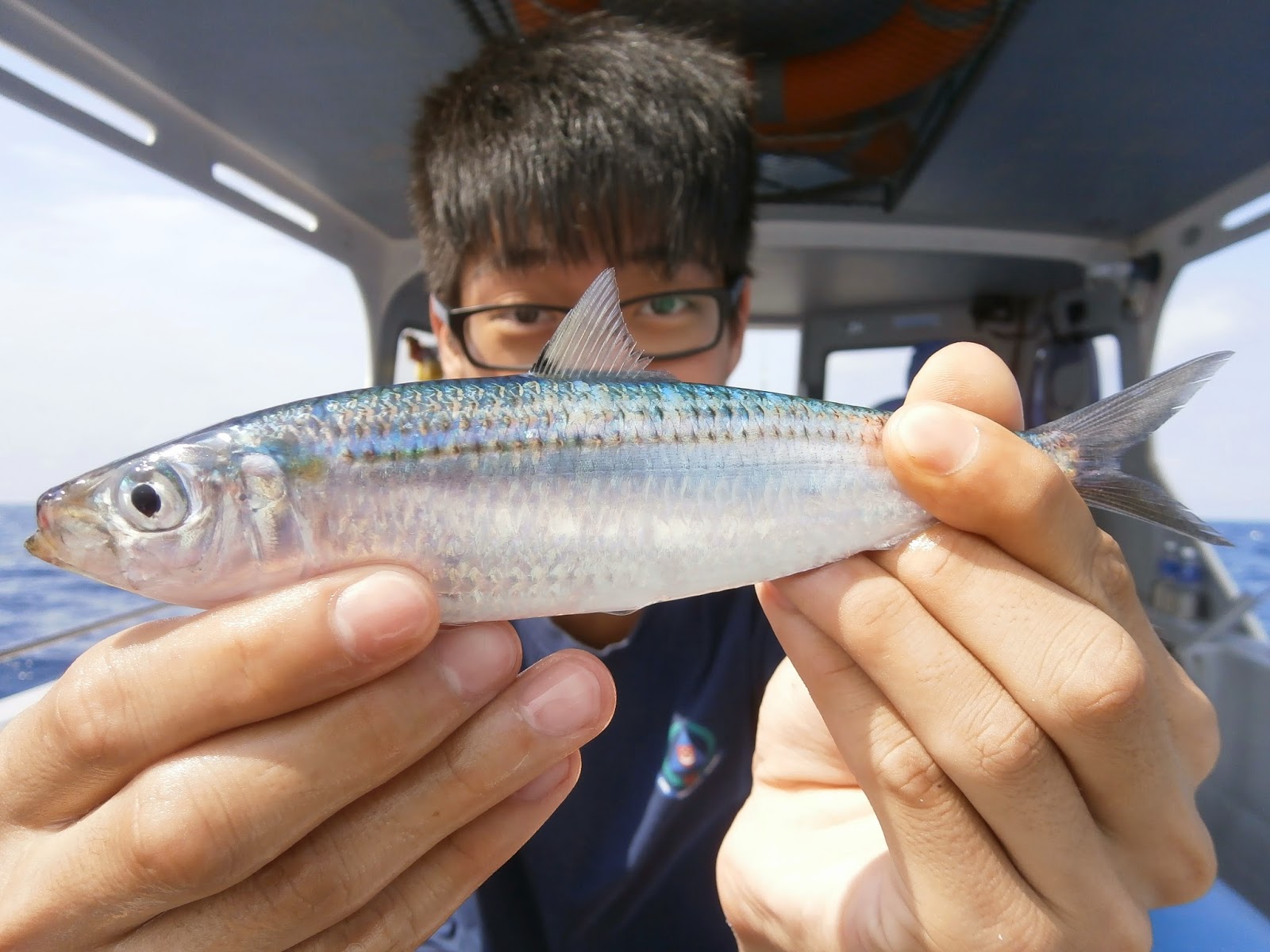 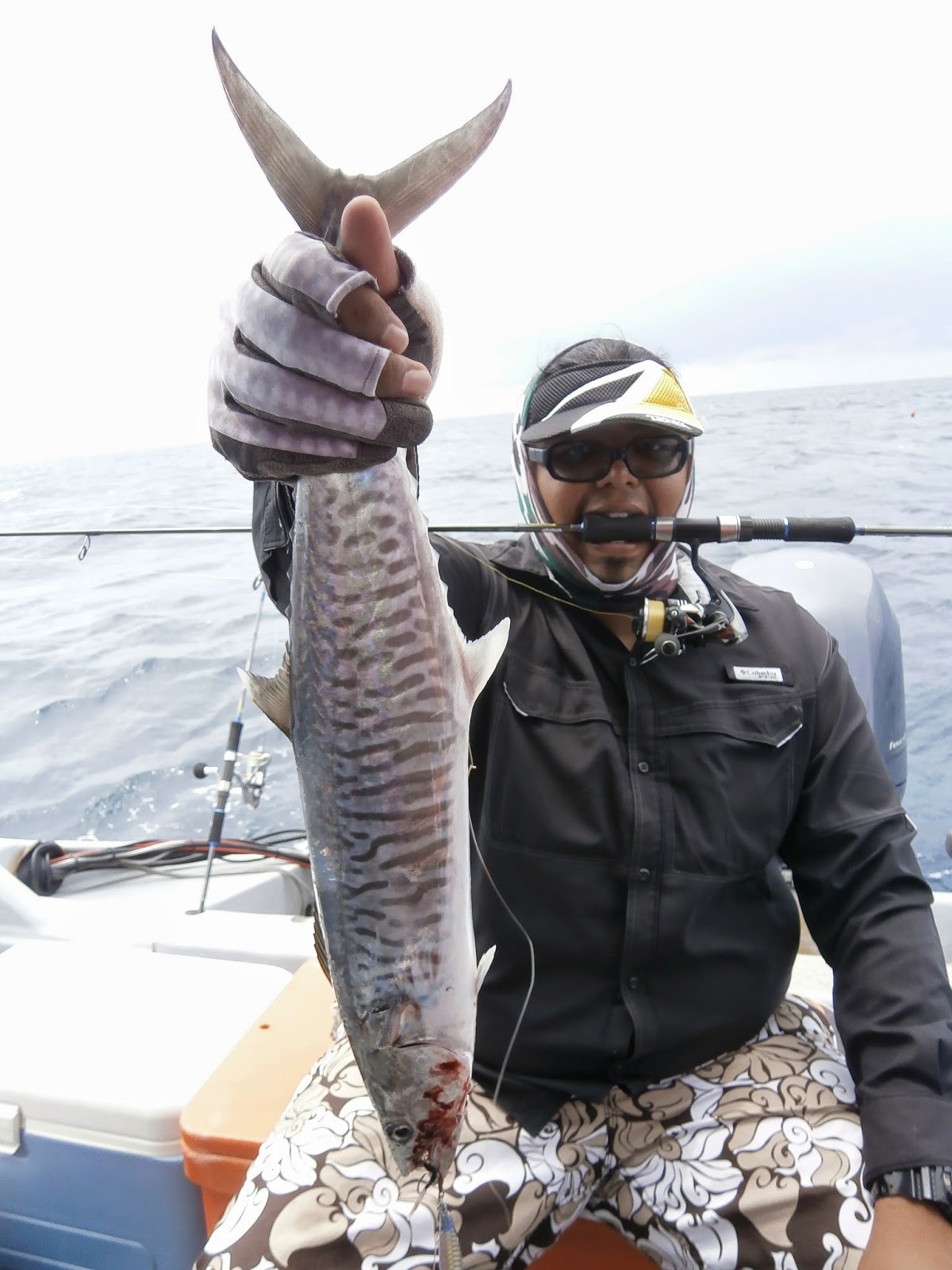 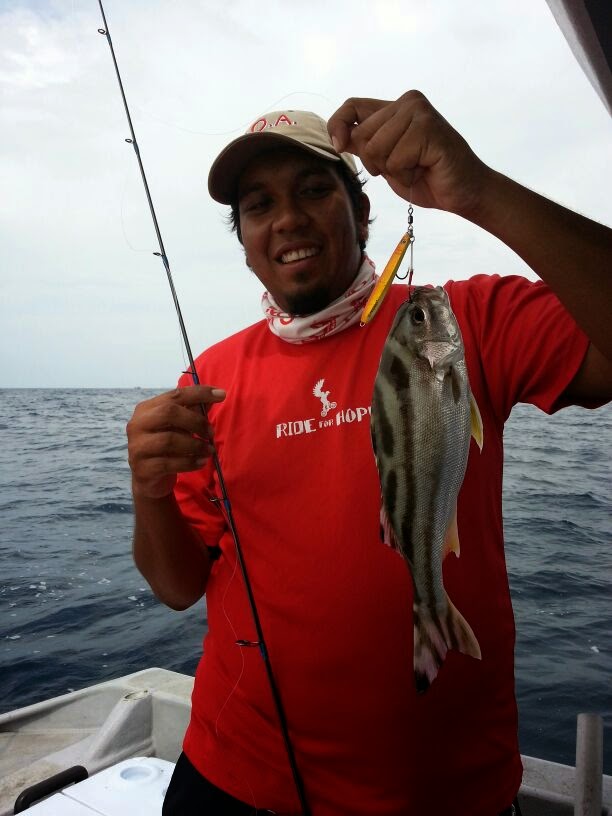 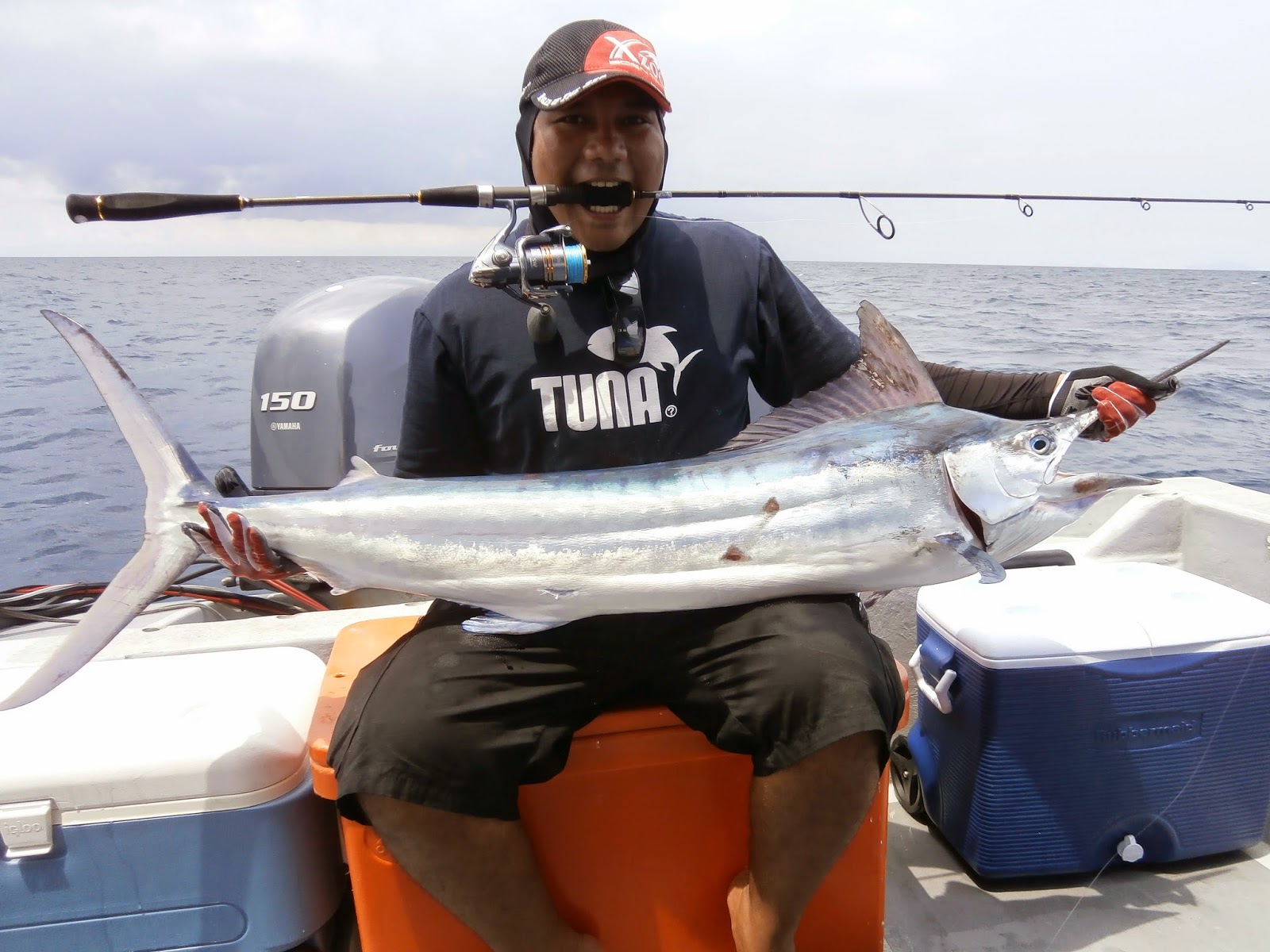 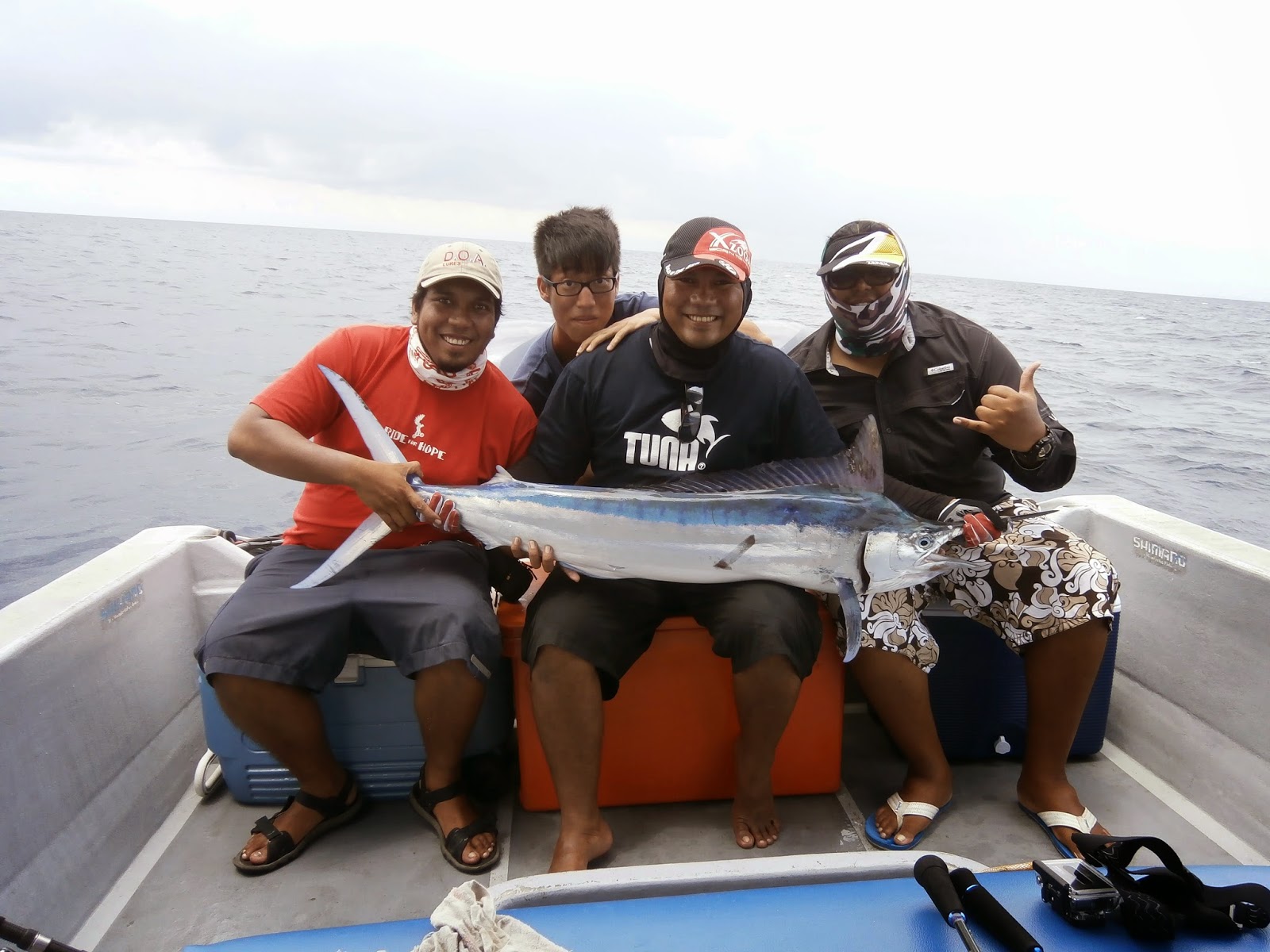 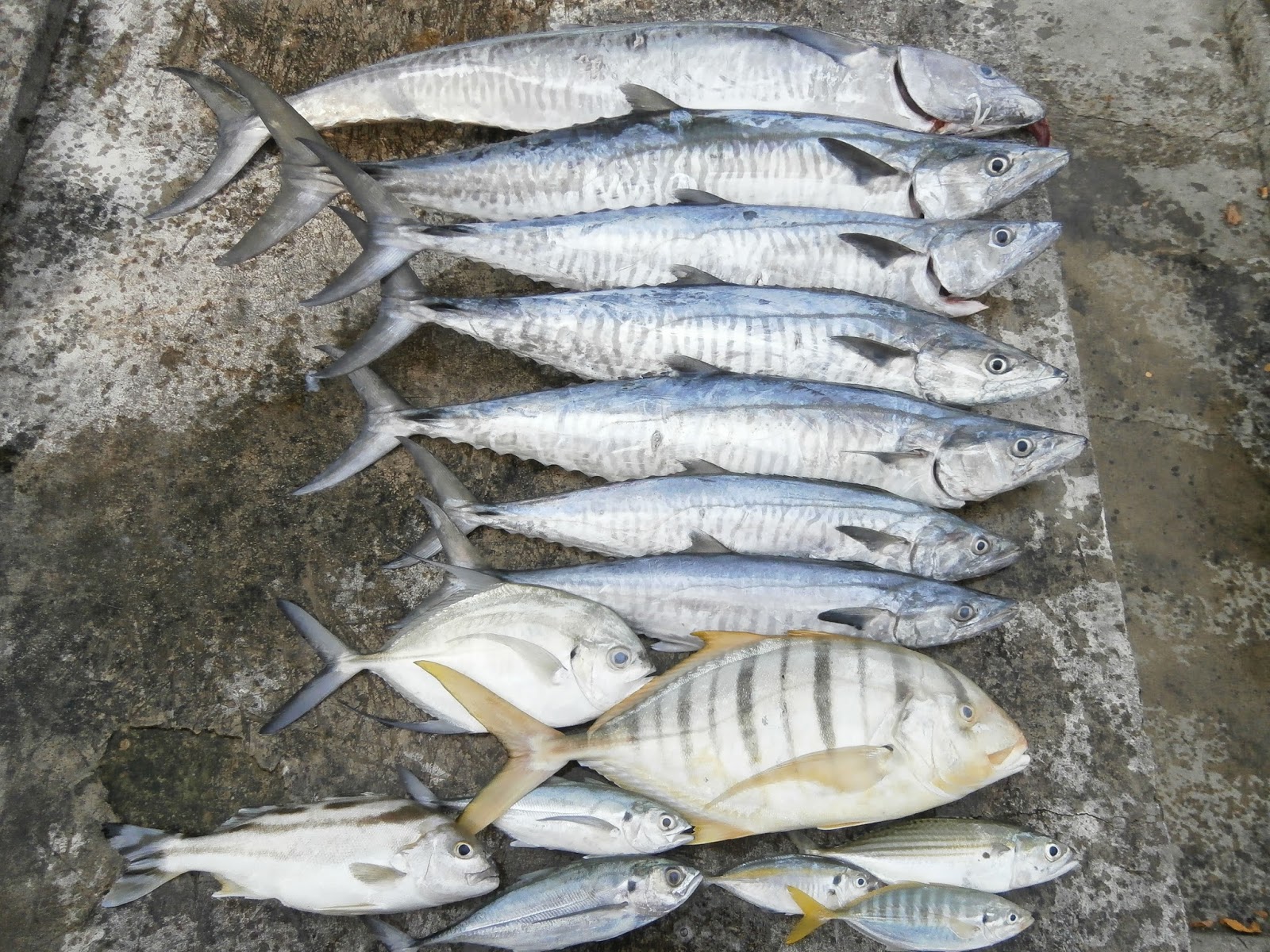