January 11, 2014
I recently purchased a fishing package from the IWF pond (saltwater catch and release), so that I can fish as and when I want without the hassle of having to pay every single time I get there. To me, it eliminates the guilt of paying $60 for 3 hours when I spend some of the time not fishing. Also, I can fish a couple of hours instead of 3. Plus I get 3 free hours. =)

Anyway. ..I was feeling the itch to fish today. So I decided to go to the pond after work to cure the itch. Upon reaching the pond I found out I only had an hour to fish before the pond closes…dang…no choice. ..burn one hour…

Quickly setup my tackle and proceeded to fish. But just as I cast my lure out, my line jerk and the lure fell…shit…bee hoon…a time wasting situation. Quickly got rid of the mess with my friend and fellow Team Saltheads member, Vina and started to cast again. After a few casts from the casting platform, I started to feel a little disgruntled because I was hoping for “lojiak”

I decided to make my way to the other side of the pond to join Vina who was there with his friend Haresh. “At least if no fish, I still got company to hang out with” I thought to myself.
Upon joining them, I cast out my lure and let it sink. Twitch and let it sink…I repeated the process until it was about to reach the bank when suddenly, I felt a few knocks. I quickly set the lure but to my dismay…I ejeculated too early…stupid me…should have waited for that solid take. But at least I knew the fish where still taking lures despite the baiters being around.

Cast out again…This time with a more patient approach. Twitch and let it sink. Repeated the process until I was about to reach the bank again and then “Boom”…a solid hard take and I strike right this time. “Fish on!” I exclaimed to Vina. I got a barramundi.  After putting into practice what Luke (a friend of mine who wasn’t there that night) taught me about controlling the barramundi or any other jumping fish, I subdued the bugger. A smile of satisfaction came across my face. Itch cured…
Brought the fish across to the landing zone so that Oswald, the pond attendant could land the fish. Took a couple of photos and released the barra.

I walked back to the other side again and repeated the process…This time I told Haresh to try doing what I did with his live bait…I couldn’t stand seeing my friend not getting any fish.

Within a couple of more casts I got my 2nd barra…Vina and Haresh was left wondering why their live bait not working…heehee… Walked over again….got the fish released and went back to the other bank. This time I decided to slack a bit and let Vina use my setup for a bit.

Haresh decided to switch back to lure and using the bounce of the ground method got a couple of hits…I think the next time he comes to the pond, I’ve got a good funny feeling that he will get the same lure as the one I was using….hee…

After a while of slacking I got back to fishing…This time I got a fish on but the fish dropped the lure…didn’t set hard enough… I was disappointed with myself. ..how can I make such a mistake?!

But it was all good….within minutes I got my last hook up…This time I set the lure hard and good…It wasn’t going any where…

Got Oswald to release the fish but not before taking the picture of the fish with the lure in his mouth.

On a whole that hour was superb… A really loud thank you to IWF and to Zerek Live Shrimp for making it into a really fun night for me!!! 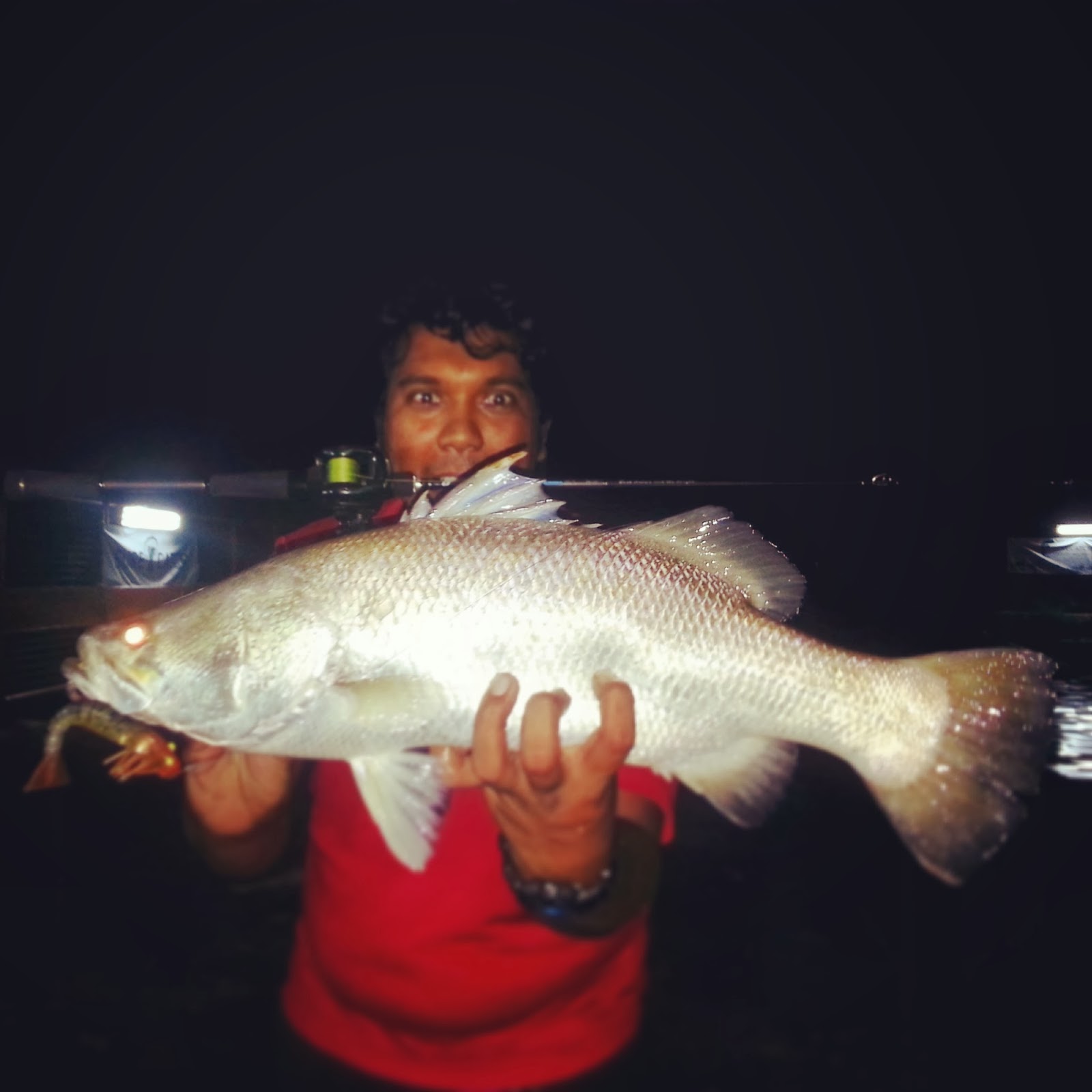 My first barra for the night! 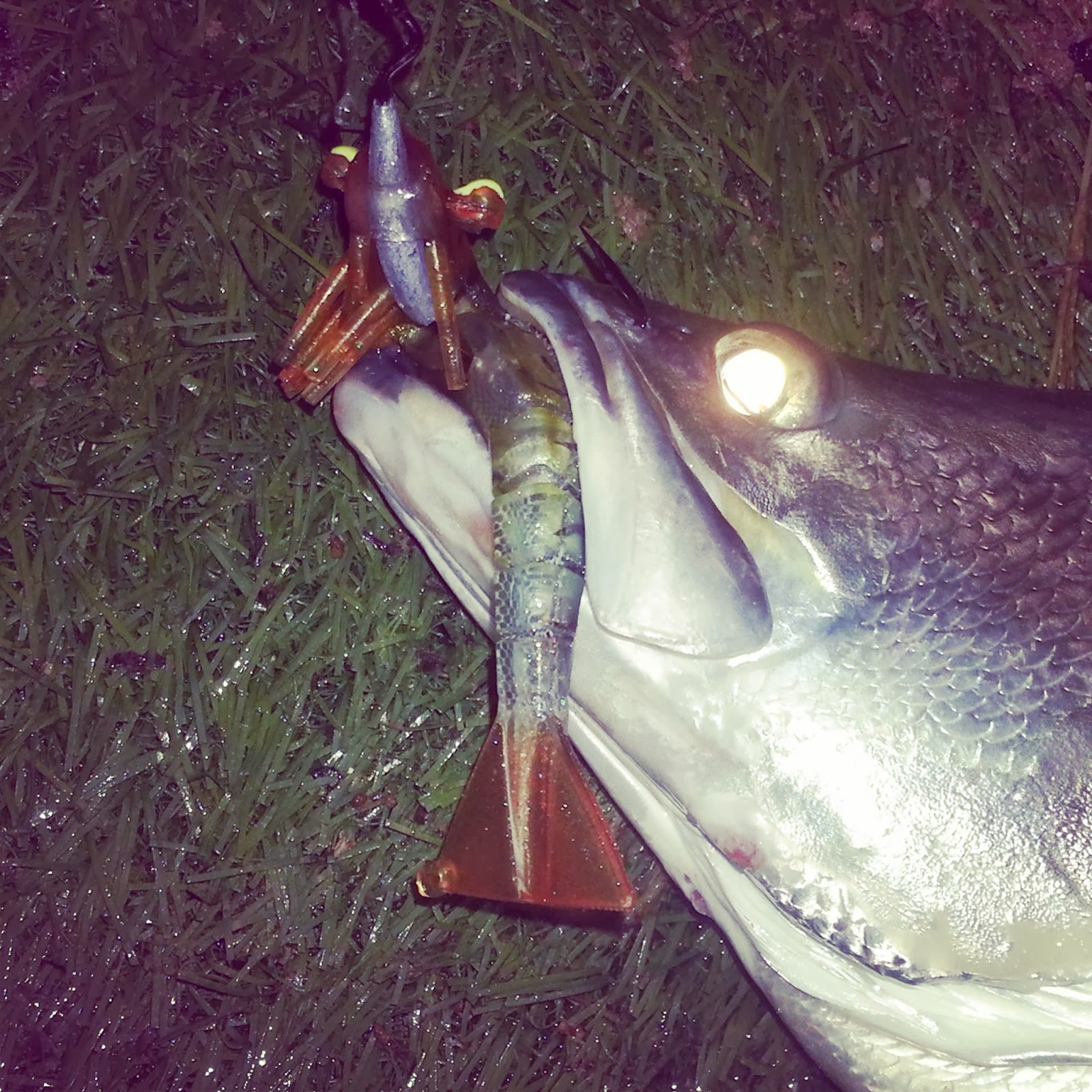 Last barra with close up view of
Zerek Live Shrimp.