When the bite is slow, go micro.

October 06, 2013
It has been a couple of months since our last visit to Desaru. On the weekend of my birthday, i managed to convince my wife to let me go fishing with my good friends Capt Badol and Capt Zam.

They are now operating a smaller boat, which can accommodate 2-3 anglers.  (The bigger boats are currently down with engine trouble and should be ready for the next open season.) The smaller boat does not come with a shelter so you will be at mercy of the elements. Bring sunblock, a poncho and plenty of water. The ride to the spot will be bumpy so hang on! (those with back trouble like my friend may want to bring a cushion to sit on. HAHA) Be warned that the trip might be cut short if the weather takes a bad turn.

The CR on days leading up to my trip were excellent. Anglers were hitting the targeted species of Spanish Mackerels on Jigs, Pintails and Bait. The group on the day before our trip hit an amazing 15 pieces between 8am and 2pm. I was excited!

The next day Lala and i set off for Desaru at 4am. Zam wanted to depart as early as we possibly could. We were met with a thunder storm in the wee hours as we entered Malaysia. After a slow and uneventful drive in the rain, we reached the meeting point at 6.30am. Zam greeted us with more bad news. We were expecting strong winds early in the day, but it would clear up later on.

We got our supplies and set off to the beach. Launched the boat and off we went. The ride to the spot was bumpy. We had to hold on tight. Things were not looking good once we got to the spot. The sky was dark, and the wind was strong, making the water choppy. Zam went to fish for bait as Lala and i started jigging. I managed to land a couple of Chencaru on a 40g orange chrome flasher jig. Zam was having some trouble with the baitfish supply as only Chencaru and small Selar were being landed on the sabiki. He let out a live Selar and a few minutes later we had some action. A small Bonito was landed. We had two baited lines at the back of the boat under Zam's care and both of us continued jigging when one of the baiting rods went into a crazy bend and the reel was screaming. It was big. Zam had to go round the boat twice and drag the fish away from the FAD, before he managed to subdue the fish.  As it came up i waited with the gaff in hand to see what it was. Another Bonito. But this one was in the 3-4kg range. I got him on the first attempt and Hi 5s all around. We had two hits from the Tenggiris after that. Both managed to bite through the wire leader.

It began to rain. Capt Badol called us a couple of times to check if we were alright. He must have been concerned that we were out at sea in bad weather. Soon other boats began to gather around us.We were in the middle of nowhere so i suppose it was more for safety that the 5 boats anchored close to us. They were teasing Zam about not having a sheltered as we were pelted by the cold rain drops. 10 minutes later the storm blew over. But the wind was still very strong. We decided to have a bite, while we waited for the wind to subside leaving only the baited lines in the water. ZZZZZZZZZZzzzzzzzz We were on again. Seemed like the Tenggiris were only interested in Tamban. This time it was my turn. It was a good sized fish. I managed to get the fish boat side. And Zam told me, not to lose the fish. I slowly brought the fish up. The fish made one last dash under the boat and into the propellor. As i was in the front of the boat, we could not react in time and the line went slack as Zam raised the engine. I was about to curse, when the line went off again! I resumed the fight in a state of bewilderment and shortly landed a good sized Chencaru. Zam and i looked at each other and burst out laughing. We were sure that we had a Mackerel on the line. MAGIC??? It turned into a hard tailed scad! Hahaha. I guess that the logical explanation is that there was some bait left on the hook after the mackerel had gotten away and this little glutton of a fish took it right after Zam raised the engine and released the line.

The wind slowed down and we began jigging. Zam was complaining that the shortage of Tamban was going to affect the bite, as Selar after Selar only got us a bunch of Todaks. Then i spotted a small school of Bonitos chasing a bunch of small silver fish. I pointed it out to Lala, who had not had any action til then and was helping Zam with the baitfish. Then as we were exchanging fishing stories with Zam, Lala's Toman on micro jig came up. As we were laughing away, Lala became inspired and took out his 'lucky' jig which landed him, his first Toman. He casted out and on the 5th crank. Boom! Fish on! ZZZZzzzzZZZZzzzzz. We told him not to panic, and he managed to reel in his first Mackerel on Jig. As the fish came up, i saw that the leader was damaged. I had only one chance to gaff it or we'd lose the fish. I bided my time as Lala slowly brought the fish in towards me. This was it! Success! And not a moment too soon. I helped Lala with a photo and turned around to Zam hitting a fish on Jig!  This one was definitely bigger. The experienced captain brought the fish up without any difficulty, and i gaffed it up for him. We were laughing our asses off as the whole afternoon we had been looking for Tamban and suddenly we were catching them on jig! I changed to a micro jig and the three of us were jigging in tandem. As my jig neared the boat. Boom!!! I was on. ' How do you feel?' Zam asked as i battled my finned adversary. I turned back and smiled. No zeros today i guess. I brought up a nice Bonito and Zam gaffed it up. It was a little disappointing that it was not a Mackerel. But on a day where it was tough fishing, we still managed a good amount of fish on Jig. Then it went all quiet after that.

Zam took us to get some Selar for my Granny. And they both beat me silly with the amount of Selar they got on sabiki. For some reason, each time i used the sabiki during the day i only got Remoras, Chencaru and this pesky little fish, Zam calls 'Kunyit'.

We got back to shore at 3pm. Said our goodbyes to our hardworking Captain and headed back home. Another surprise was waiting for us at the 2nd link. A 3 hour Jam! We'll be back to Desaru in two weeks!

Till then,
Tight Lines. 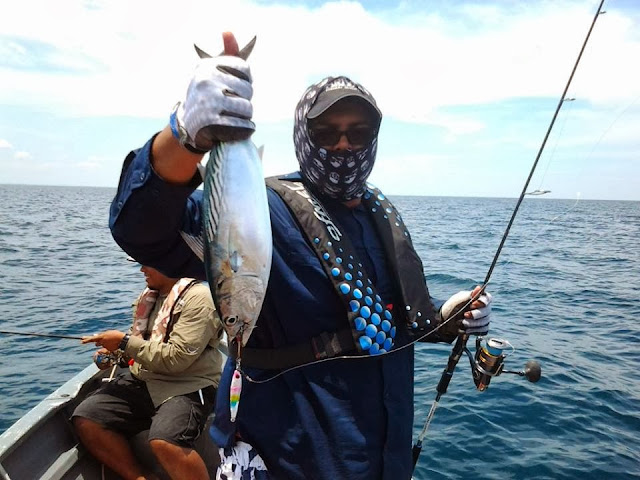 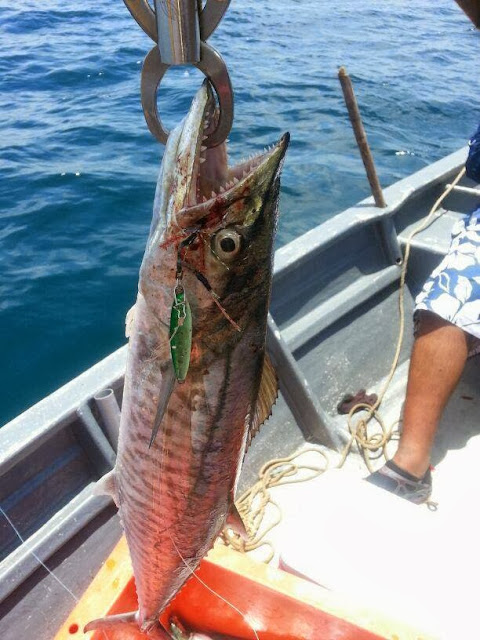 The ever accommodating Capt Zam 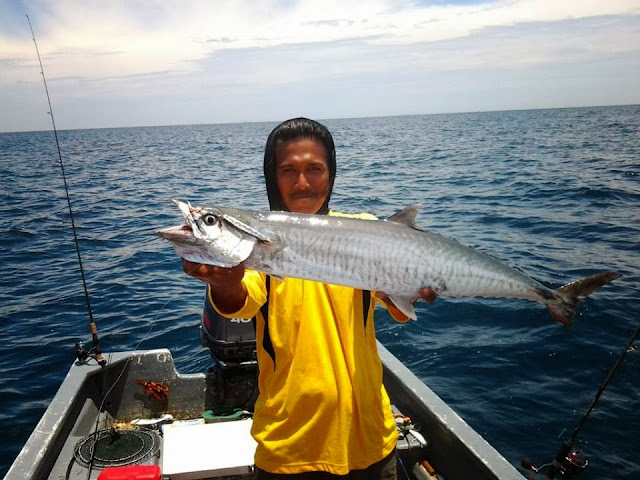 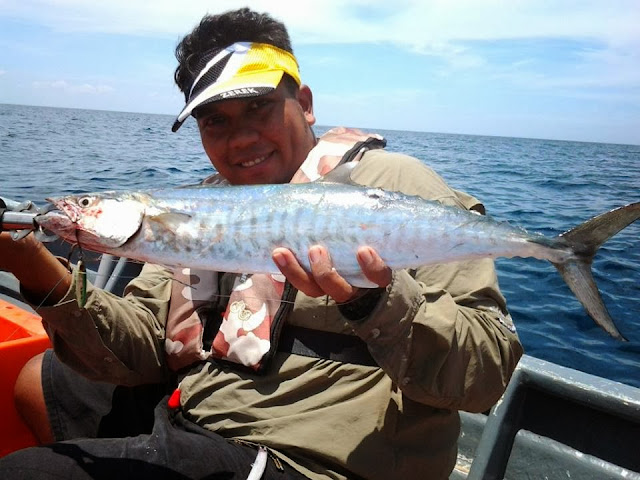 Lala only took his fish back. And the Big Bonito's Head 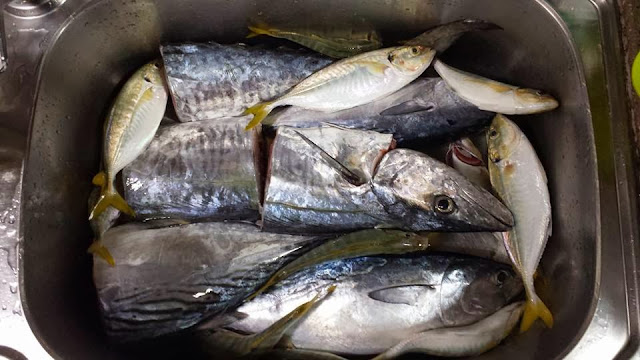 Video of the trip