August 29, 2013
Recently, i have been on two trips to Pulau Ubin to try my hand at some catching some Barramundi there. On the first trip, it was storming and the guys and i got drenched even before we started fishing. With a couple of tips and directional advise from the ever helpful Alan Chan from Hooked Magazine, we found a suitable spot for fishing. We were greeted with the sight of a little Barramundi just chilling out in the shallows. But they just wouldn't chase the lures. An old uncle, baiting with live prawn told us that the rain had shut their mouths tight. So we moved on to another area. After an hour or so, we left as the rumblings in our tummies got louder.

A week later, as i was telling Oswald about my trip during the CCA meet at Fishing Paradise at Bottle Tree. He offered to take me to Ubin, so that i could have a go with the Barramundi there. The tide had to be be right he said.

So we met up early one morning and after a quick breakfast at Changi Village and saying Hello to Lance who is currently a guide for Deepseafishing.com. We set off to Ubin. Oswald, his friend Sin How and i arrived shortly after and found that the tide had not quite coming in yet. So we hung around for a bit. A pack of cute little dogs kept us company for awhile. When the water had come in a fair bit, we spotted a small Barra resting. A quick cast towards his direction, and he fled into the murky water.

Shortly after, Oswald who was spinning a live prawn had his prawn chomped on and FISH ON! Up came a nice looking Barra! It went a little quiet after that. We lost another 2 due to a poor hook set later on in the day. My highlight of the trip, was when i was working my ZEREK Sabre Dance Minnow close to some snags. At the third pass, a huge splash behind just behind my lure. It was a MAMA!!! Scales gleaming in the sun, but for a brief moment. And it missed my lure by inches!!! Oswald and i looked at each other gasping and cursing in disbelief. I must have sent my lure down the same channel 30 times after that but she did not attack it again.

Switched over to live prawns for the last one hour. I got a bite at the snag area just before we had to go, but i got snagged!!! !@#$%$#@! The bloody lucky unknown fish, was still on the end of the damn line. It was a lose-lose situation. I couldn't get him out, and i believe he was stuck too. In the end, i burst the line and it broke off at the leader so hopefully the bugger managed to free himself.  We had to leave after that as we had other stuff to do. I'll be back to get myself a Barramundi!!!

Oswald's Barra on a Zerek Barra X the previous trip 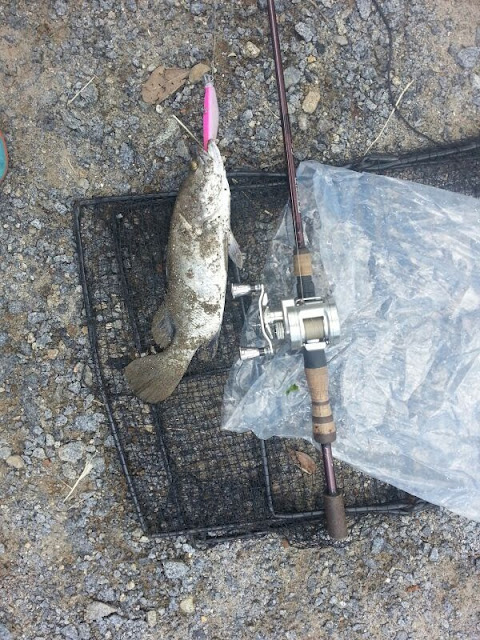