July 30, 2013
At 530am the Tay family (Adwin, André + Dad) came to fetch from my place and we set off to Desaru. Usually when I travel, I would take the second link at Tuas but I realise how much shorter it was to go from Woodlands. Anyways we stocked up on supplies in JB town, had prawn noodles for breakfast n off we go. Travel time was like 30mins – 45mins. That’s pretty fast.

As we arrived in to the Desaru coffee shop, we saw Zam awaiting our arrival. It was supposed to be Abang Badol as the captain for the day but unfortunately his boat had a motor problem. Met up with Zam, and we had pleasant surprise from our friendly Captain Badol. He gave me a little pep talk of what to expect and what was needed. After all was said and done, I took a ride in Zam’s vehicle while the Tay family in their car as we both headed off to beach.

Upon arrival, we did not waste time and loaded up the boat with our gear and supplies and off we went. First stop we decided to catch some bait fish and after collecting our supplies, we headed off to our first location to jig. Adwin, Andre and I started jigging while Uncle Tay went to his favorite corner and dropped live bait in to the water. Water looked very good. Was it a good day for fishing or was it not? After no bites for half hour, Zam decide to change spot. Fish are not here. We raised the anchor and head off to another spot.

When we arrived, I saw that the ship had mini waterfall which was creating a bait frenzy. I decided to drop sabiki and in less than 30seconds I was on, full house of Kembong. Damn! They were heavy. Adwin was the first to draw first blood, when he hit a Spanish mackerel (tenggiri bunga) on a senses lure which he was trying. Can’t recall the exact model. Next Uncle Tay decide to try his luck, he casted his bait into the waterfall n the next minute you knew he was on but it wasn’t a tenggirri, it was a rainbow runner! Awesomeness! Next Zam decide to give a try and true enough he was on within the next few minutes. Lucky to some quick reaction by me and adwin we manage to save Zam’s rod, otherwise it would have gone for a swim.

Seeing how ferocious the fish were, Adwin and I, decided to throw our jigs into the waterfall and jig. We on in the next couple of minutes. So far everybody on the boat had caught a fish except for André but his luck was about to change. He hit three rainbow runners in a row, hat trick hero.

After a while I decided to continue jigging for bait fish. We had kembongs, selar and cencharu. Later on Capt. Zam, was having an issue. the Macks kept biting him off. Later, the hit rate went down. I think we caught the entire rainbow runner school. We didn’t get the Macks that we wanted but we were pleased with our catch at that time.

Capt. Zam said lets go off to spot where we can try for tenggiri and a little bottom fishing with the amount of bait we had. This was gonna be our last shot in nabbing those Macks. Upon arrival, we drop our lines into the water. We were just baiting as we were pretty tired from the last action. Uncle Tay was the first one to hit first blood at the new spot with nice finger-mark snapper and followed by a grouper. After seeing the grouper, Adwin, André, Zam and myself decided to hook a live tamban and send it down. Next thing you know line was peeling off my Sustain. After short battle, up came a nice 9.5kg grouper! André was next to bring up another grouper. That was nice 6kg grouper. Adwin hit one after that and we were like, ‘whoa did we hit a grouper spot?’

While trying to unhook the fish for Adwin, Zam had a big take. It was huge. It was even bigger than the one I caught. But before we could land that monster, it gave last surge and broke the line and hook off. After that last piece of action we headed back to shore as we were drained out. Had a good trip with a good and hardworking captain and awesome fishing kakis. -Jith 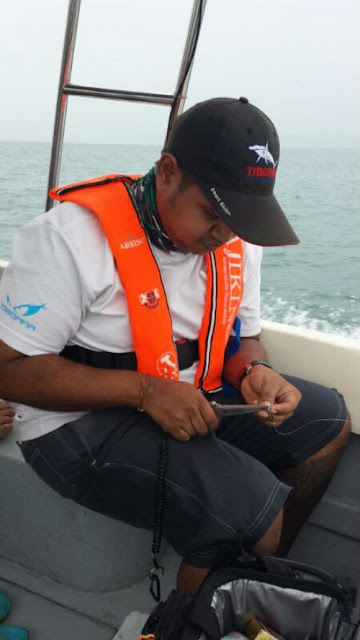 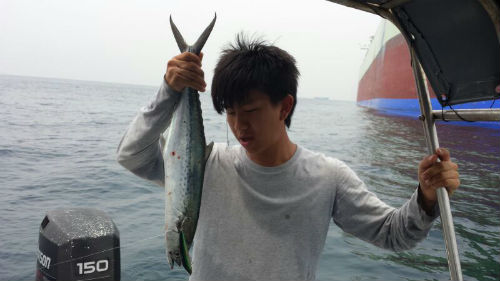 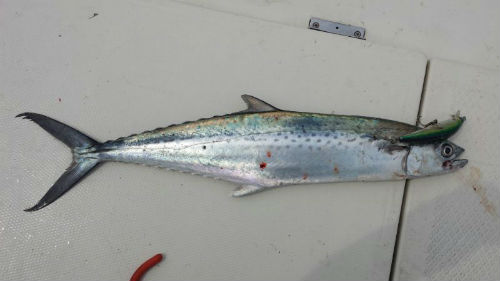 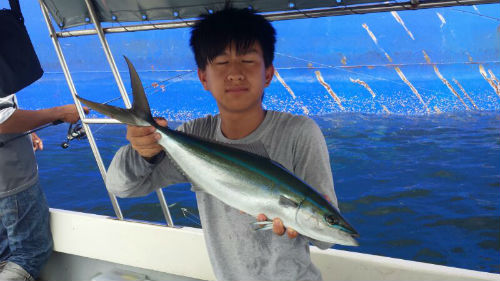 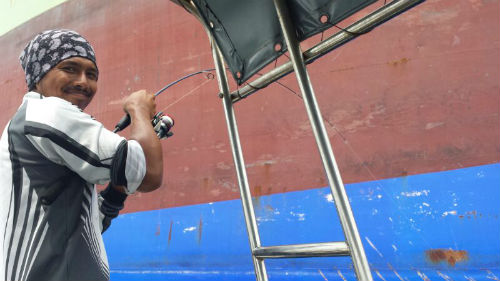 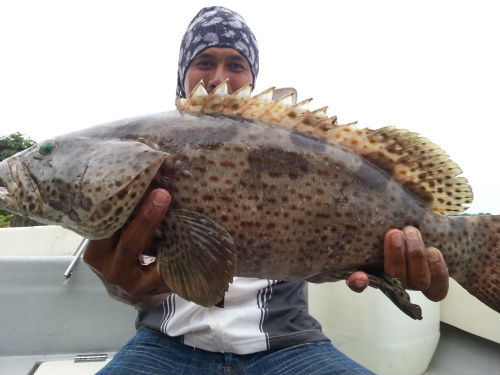 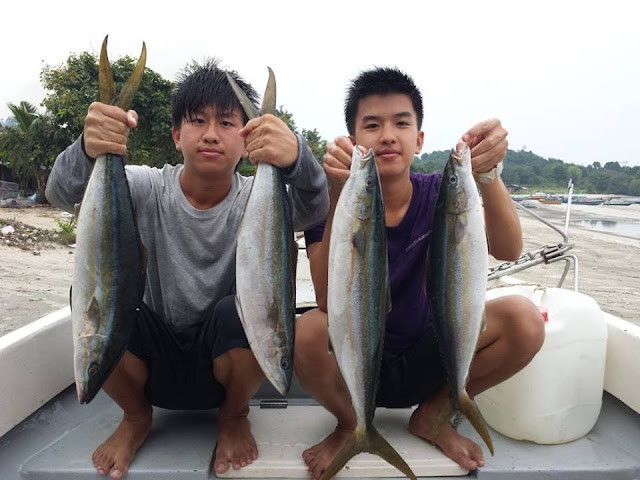 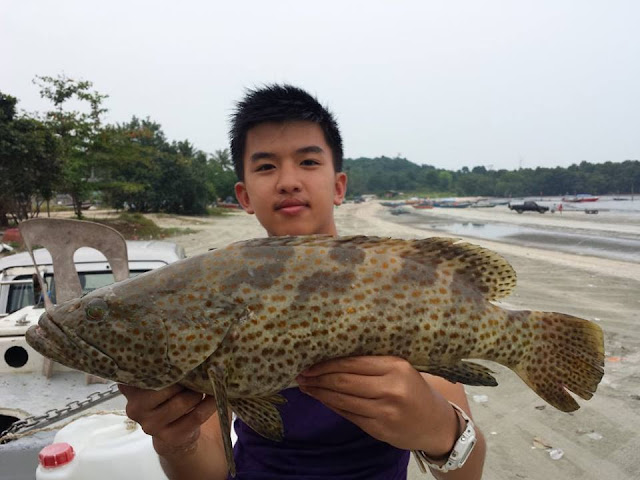 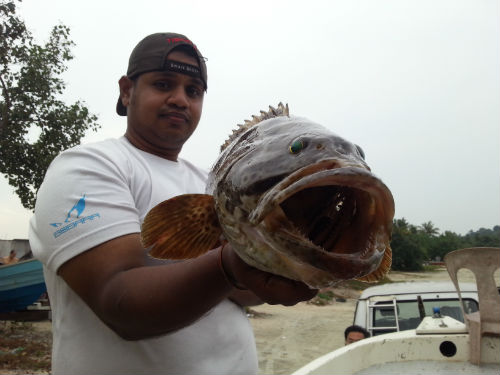 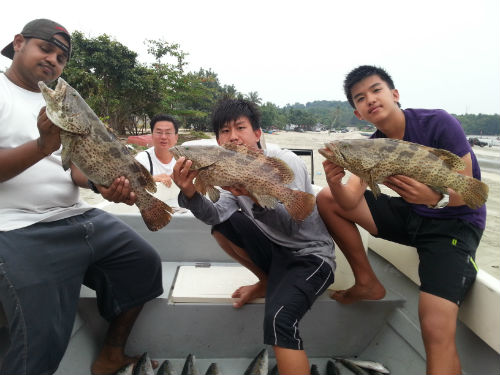 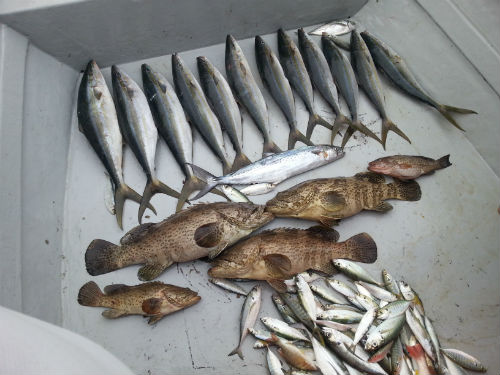