July 05, 2013
Had to go on a work related fishing trip to Desaru. We had to go to check out the services of a boatman under Rothman's Charter. Due to some unforseen circumstances, there was a problem with our transport and i ended up being the driver for this trip.

After a haywire morning full of mis-communication, we finally reached Desaru at 9.30am. Two hours later than the agreed meeting time. It was a smaller boat, unlike Badol's. We set off without any problems. 20 minutes later, we were at our first spot. An unjam. I was told this was a jigging trip so i had only packed minimal terminal tackle. Imagine my horror when the Captain told us this was a bottom spot! Fortunately, there was not much of a current and the sinkers i use for catching baitfish were sufficient to get my bait to the bottom. Jack hit first blood with nice table sized Fingermark Snapper. Andy followed up with a couple of smaller snappers and groupers. At the front of the boat, i was getting nibbles from these tiny critters. Palm sized pest of various grouper and snapper species.

Eventually, i got some good hits, but due to the 'live filming' a couple of fish managed to get back into the hole as we waited for the camera to roll. Andy, lost a few pintails on the drop much to his annoyance. He remarked that he couldn't feel the bite. 'Juvenile Mackerels', the captain said. After losing 3 more biggies due to filming and various comedic reasons. Jack, hit 2 beautiful Parrotfish in quick succession with peeled dead prawns.

We moved on to Tukun Reef. I had a massive hit, and the line was peeling. Unfortunately, the drag was set too high (targetting Grouper) and the 'Ebek' (according to the captain) busted us off. BUMMER!!! I was chided by all on the boat. Well, they lost their fair share of biggies too. Plenty of Garfish were landed, the biggest at 5kg (released). I finally landed a nice table sized Grouper at 3pm. By then the wind had picked up and it was rock and roll time. After Andy landed one last Garfish. It was back to shore. On the beach, we were the envy of some others as their catches were far poorer than us. Guess we were lucky (although we were bitching all the way). 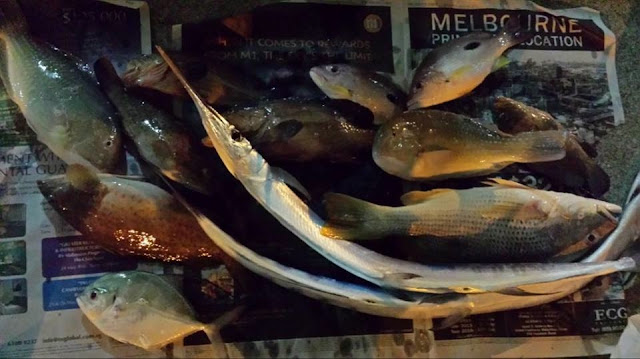 Some of the smaller ones did not make it coming up from deeper waters. only a few notable catches.
Bottom Fishing Desaru Rothman Saltheads Singapore fishing blog