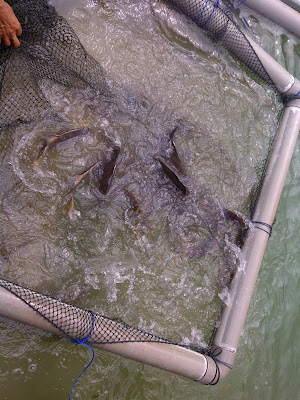 Wow, it has been a long time since i have gone fishing! I was asked by Kenneth and colleagues, to organize a private booking at the Pro Pond. They were kind enough to let me join them for this session.
They wanted to release 2 nets (60 fishes ), and the fish of choice were Seabass and Golden Snappers. We also had 2 Groupers thrown in. Made the arrangements with Panjang and kept my fingers crossed for good weather and a hot bite.

Got to the pond pretty early on the day of the event. I was surprised to almost all the anglers already there setting up their tackle. Got the live prawns and keep nets ready for them and went off to set up my gear. Some of them had a quick breakfast, while some others started wetting their lines. Straight from the cast off 3 Golden Snappers and a Mangrove Jack were hooked up. A Seabass was lost due to a poor hook set. 5 fishes up before fish release. Was it a sign???

Once i set up my tackle, i asked the rest if they were ready to release the fish. Panjang suggested releasing both nets at the same time, but the majority wanted to release one first. Once Panjang had released the fish, the initial few minutes were quiet. Then, down went my float! Fish on!!! As i was reeling in my fish, i looked across the pond and everyone was hooked on! Landed my first fish, re-baited and cast out again. The bite was so hot, i just tossed my fish on the floor, re-baited and went back for more.

When one spot went quiet, another would be bustling with hook ups. Was good to see many of the newer anglers landing their first fish. It also meant a lot of fish were lost due to improper rigs and tackle set up. Short leaders, loose drags, lost split shots. I took some time out after my 6th fish to help the newer guys. Once everyone seemed set to catch, i went off to do some hunting. And man did i find a sweet spot. Far away from everyone else, i stumbled upon a school of fish resting in plain sight. These were definitely not the one that were just released. Tossed in a Prawn and BOOM!!! Fish on!!! 1, 2, 3, 4, 5, 6 Golden Snappers in a few minutes. Taking my tally to 12 within the hour. As the spot suddenly got crowded, i decided to take a break and have a peek at the total catch. Golden Snappers everywhere. No sign of the Seabass. Strange! I went back to the first spot i was fishing at dropped a prawn in and within a few seconds, there was a bobble. The float was moving away from me but did not go under. Should i strike or should i wait? As i pondered, the fish decided for me and the float went under. STRIKE!!! Fish on!!! Another Goldie! Landed another 2 more at the same spot and then took a break while some of the newbies got in on the action. 15 fishes in total for me. Went to get a drink and some of the guys told me they were ready to release the 2nd net. Got Panjang to release the 2nd net. I went back to the honey hole, while the rest gathered near the net. This is when one of the guys walked up and went, ' I am following you, because you know where the fish are.' He barely finished his sentence, when my float shot down and line began peeling from my reel. I had no time to react and instinctively tried to get the finned fiend out of the ledge. Thank God, i decided to go with my 50lb FC leader. Few seconds later i saw a black silhouette in the water. Grouper!!!! My joy was short lived though. In my momentary happiness, i forgot about maintaining tension on the line as i reached for the leader. The hook got dislodged!!! BUMMER!!! !@#$%$#@! I was totally pissed with myself much to the amusement of my new friend. (We had a bet going on for landing a Grouper, $10 bucks per pax bounty!)

Walked back to the net area, where there was a feeding frenzy after the release of the fish in the second net.  More Goldies were landed, along with a few Seabass. I hooked up a prawn and threw it in and landed myself another Golden Snapper. This one had swallowed the hook. Cut off my leader, re-tied with 20lbs FC and rigged up a Zerek Live Shrimp lure. Went to the middle of the pond where the last 2 Seabass were landed and tried to seduce them with my Shrimp Lure. Thump! Strike!! MISS!!!! Damn it! Cast out to the same spot, let the shrimp sink and slowly bounced it off the bottom. BOOM!!! Fish On!!!! Golden Snapper! My friends were looking on and asking if using a lure was good. I shrugged and cast out again. Same method, BOOM!!! Fish on!! This time i smiled and told them, the fish will eat it if you make it look real enough. Another Golden Snapper. Landed 2 more on the Zerek Live Shrimp and then i called it a day. Total catch for me was 20 pieces of Golden Snapper. 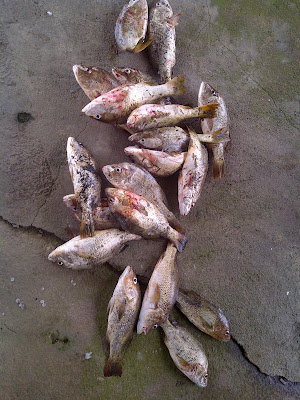 The total overal catches in the other 3 baskets were 26, 14 and 12 adding up to a total of 72 (if you add my 20) pieces. Which is amazing because we only released 60 fish! Everyone had fun and had enough to bring home. I left as the others were splitting the fish as i had to go to work. I didn't take much pictures as i was busy fishing. I took a quick picture of my catches before i left. I will upload the other pictures as and when Kenneth's colleagues pass them to him. Speaking of Kenneth, you might be wondering how come i didn't mention him in the CR. He overslept again! Showed up towards the end of the session, wished us good luck and went back home to sleep some more. The rest of the Saltheads were so amazed at the catch that we are going to book a couple more sessions.

I have been getting PMs on facebook, regarding the sessions when i posted the pictures last night. If you are interested in joining us for the next few sessions. Click on the link provided and send me a PM at the  SaltHeads Facebook Page. Tight Lines!!!!