January 08, 2013
It's been awhile since i went to fish Panjang's Pond at night. But my schedule is as such now. I had 3 hours to kill and it kindly fell between 7pm to 9pm. This meant that i would be able to hit the fish release period. Set up my gear, and went to buy bait from the new night staff. Pretty friendly dude. The Boss, gave me a weird look and asked how come i was fishing at night. I told him i had to make do with whatever time i had to fish. He laughed and told me Panjang might get upset!

Set myself up right at the end. A couple of people were fishing near the goal post. Hooked onto my prawn and went to hunt for some leftovers from the afternoon fish release. I must have totally lost my bearings cos i got snagged 3 times in a space of 20 minutes! Decided to switch to a float rig instead. It was 10 minutes to 8pm and i still had not registered any bites. (Mosquito bites however were coming in hard and fast despite the use of insect repellent.)

I had covered most of the usual spots, so i walked back to where i started. Bought a drink and had a short break. Saw the uncle rowing out to the net area. The firing squad lined up at the goal post area. The Boss and i stood in the darkness enduring the mozzie bites. Fish was released. The firing squad let loose. And then Silence. Down went my float! Strike!!! Fish on!!! In a second the Boss was on too. Double hook up!!! Up came to a Golden Snapper for me. (Boss got an MJ), quickly re-baited and hit the spot again. As soon as my prawn hit the bottom. Fish On!! Another Goldie!!! Goal Post area was seeing some action. No one came over to where me and the Boss were. Hahahaha. Rigged up and went again. Boom! Fish On!!! I kinda missed seeing the floater with the light stick shoot down! One more Goldie! Threw him in the basket and reached for a prawn. To my horror, i found the basket submerged. In my haste to re-bait and get back to the action i had not secured the basket properly. I only had 3 prawns left. Damn it! !@#$%$#@! I grabbed one and hooked him on and went off to my spot again. Nothing. Reeled up and tossed a little bit to the left. Down went the float! Strike!!! Fish On!!! Up came Goldie number 4. Number 5 followed shortly after. But as i went to throw the fish into the basket, i tripped and bye bye Number 5. Highly irritated with myself, i hooked on the last prawn and tossed it just in front of my basket. As i took my empty bait well out, i saw my float bobble. Then it sank ever so lightly, til it was just beneath the surface. Could it be??? I took the rod in my hand and reeled in the slack as i got ready to strike. But as soon as the fish felt the tension he shot off. Strike!! Fish on!!! The fish swam out and rose to the surface, dashing my hopes of getting a Grouper. Three acrobatic jumps later, i landed a table sized Barra.

As i walked to go get more bait, my phone rang. I had to go. Domestic duties. Ah well, at least the year ended on a good note. I guess 2012 is history, i don't know what 2013 has in store for me, so til then, lets let it remain a mystery. 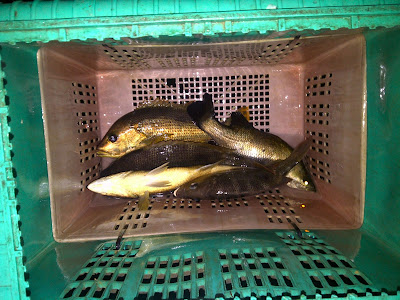 By the way do check this blog out. It has loads of brand new JDM rods and reels at amazing prices. I've got my eye on a couple of things already.
http://www.tacklewhore.blogspot.sg/