January 12, 2013
Been suffering from a bout of stomach flu the past few days. When my alarm went off this morning, i was pretty tempted to shut it off and go back to sleep. But i got up anyways. Picked Jith up and headed to the pond. I wasn't feeling too good, but the morning air made me feel a little better.

Got to the pond, and was surprised to see 5 anglers already there. I had a feeling today was going to be one fo those days. Rigged up and looked to see all my favorite spots already taken. Panjang came over grabbed a prawn and told me to head to the goalposts as the bite was better there. Feeling a little lethargic, i decided to stay put where i was as Panjang went over. 1 minute later, he was on! Walked back grinning and said, ' 1 minute 1 fish! He chided my and told me to go over. But when i did, there were already a few people casting there, after watching Panjang land a fish. One particular angler landed 5 within the hour. As i walked around the pond, i saw plenty of surface cruisers. The fishes were sick too. Hmmm, i guess it was going to be a tough day. Then i spotted a couple of pomfrets chasing my prawn as i reeled it in. Ah Ha! I haven't seen these buggers in awhile. I decided to target them. Changed to a smaller hook, cut up one of my live prawns, and casted my floater rig out. Nothing for the first 10 minutes. As i walked off to get a drink, the float bobbled. Jith got ready to strike, but he tried to set the hook prematurely and the Pomfret got away. Nothing in that area on subsequent casts, so i went to the goal posts area. Casted out, and slowly jerked my float as i reeled in. I had one eye on the float as i chatted with the Uncle next to me. ( Who was complaining about the lack of Grouper action.) As the float got closer, about 5 meters from the bank, i felt a tug. The float went down ans Strike!!! Fish On! The fish was putting up quite a fight. When it finally surfaced, i was a little surprised by the size. Well over a Kilo. Then as soon as they appeared the vanished. I had a feeling, they were in the net area as i constantly saw splashes on the surface. But alas, there was no way to get to them. Fish release time came soon. Went to one of my favorite spots and waited for the bite.  Tug, TUG. Strike!!! Hook came flying out at me. Haven't done that in a long time. Ran off to re-bait and went back again. This time some inconsiderate angler had cast his lines right infront of everyone's float rig from the opposite bank. This meant unwanted tangles and the regulars were pretty pissed off as anyone standing in that row who got a fish on would get tangled with the other guy's line. To make matters worst. He got the first fish, which meant all of us had to pull up our lines as he reeled in his fish. !@#$%$#@! After all the swearing and cursing, it was back to business. Felt a tug on the line as i reeled in the slack to strike, it felt like i got stuck on the ledge. My neighbor laughed and went, 'not stuck la, got fish.' Heh. 'Well, if you say so.' Strike!!! Fish on!!! Golden Snapper for me. As i un-hooked the fish and threw him in the basket, i saw Jith miss. Damn it!!! Went back again, and casted out. Prawn hit the bottom and BOOM!!! Fish on!!! Reeled in another Golden Snapper.

Once the bite slowed down and i decided to go look for the Pomfrets again. I was rewarded with a second kilo sized Pomfrets moments later. I was pleased that my gamble paid off. Only for some of the anglers fishing in the previous spots to hook up again. The fish were up for round two. Jith managed to land a Golden Snapper in round 2. I stayed on where i was and tried to hook up another pomfret for a hat-trick. Got my 3rd bite soon after, but i was too close to the metal pole that held up the pump. I got snagged and the fish was lost. Called it a day after that as it was getting too hot and i was starting to feel queasy. Hope i can hit my Hat-Trick next week. 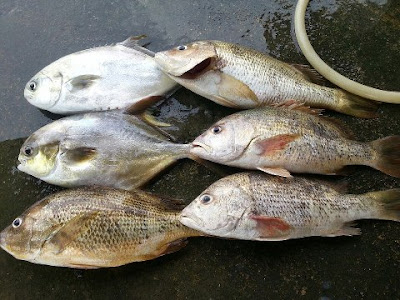