January 28, 2013
I recently went on my first Madai trip to the Southern Islands aboard Ah Heng's Boat. The catch was not fantastic given the foul weather but it was a quite a learning experience. I had spoken to a few friends and gotten some info and tips on what to do and expect. But learning things first hand through experience made me understand that a you need to get a few things right before heading on your first madai trip.

The following opinions are based on my own first hand experience. I am not an expert at Madai Jigging, so if you feel that there is something that needs to be corrected, do email me at isaiah@teamsaltheads.com

Reel: I would recommend going with an overhead or BC reel with a jigging handle. It is easy to control with one hand when you are releasing the madai jig. It is also easier to set the hook, if you encounter a hit on the way down. (This will happen a fair bit) As the boat is drifting, we need to bounce the madai off the bottom of the unpredictable landscape of the seabed. So sometimes you need to release line to hit the bottom, and some times you need to reel up your line to prevent a snag. This type of reel would be more convenient than a spinning reel. As we would be fishing slightly deeper waters, go for a reel with lower gear ratio, so that you have some cranking power to bring that fish up. I have friends who are using reels like Shimano Conquest 200 and Daiwa Ryoga 2020.

Rod: Now there are two schools of thought here. Most will tell you to go for a 6ft rod that is parabolic. They say that this gives the jig a natural action. But i would prefer a shorter rod with a fast tip. My reasoning is that when the boat is drifting, snagging in the rocks or coral is inevitable some times. So when you feel your jig hit a rock or a mate in front of you gets snagged, you want to yank your jig out of that zone. With a longer parabolic rod, you would need to be faster and lift the rod pretty high. But if you are using a shorter rod, and upward tug would get you clear of the snag zone faster. ( There are some of you that might disagree) A shorter rod also gives you better leverage over a fish when you are hooked on.  There is an article you can read about using shorter rods for madai jigging here.

Line: I was using 20lbs braid with a 40lb FC leader. I was using about 60cm of leader and connected it to my main line with a uni to uni knot (i got snagged a couple of times.) I tied the madai directly on the leader with a loop knot. ( you can use the rapala knot or any other knot that allows the madai to move freely)

The Madai Jigs: These come in various shapes and sizes and in a plethora of colors. I would suggest getting 100g - 160g sizes if you are going to the southern islands. (Sometimes the current is weaker and you can get away with the sub 100g madais) The first thing, anyone will tell you is to change the hooks on the madai jigs. Many brands come with 'owner' hooks and such but nearly all the anglers i know tell me not to rely on stock hooks. You can buy pre-tied ones or tie some on your own. I will add the pictures of Ljster Mark, who was kind enough to let me use his photo guide below. I was wondering why in the hell would these companies use 'weak' hooks on their jigs. While watching a Shimano Video on Madai Jigs, i realized that if you get snagged, you could pull the jig till the hooks gave way and freed the madai jig. (We are talking locked drag or even thumbing the spool here to open the hooks up) The hooks are cheaper to replace as compared to the Madai Jig itself. Ingenious! If you have set the correct amount of drag and you are on a fish the chances are that you will land the fish before the hook opens up. I used stock hooks, and they did not open up easily.

Method: The local method. As the boat drifts, you send your madai jig to the bottom. As soon as it reaches the bottom, you reel in the slack and lift the rod up 45 degrees, before slowly lowering the jig back to the bottom. This process is repeated until the angle from the tip of the rod to the line going out is greater than 45 degrees. Once you reach that point, reel your jig all the way up and start over. Another method which the anglers in New Zealand use is to lower the madai jig to the bottom, crank it just so it sits off the seabed and let it drift in the current. This will naturally cause the skirt to flutter. Use your imagination and combine both methods.You need to make the madai look like a yummy octopus. So how you twitch, lift and bounce your madai is key to making that fish bite.

Once you hit the fish, set the hook and reel without pumping the rod up and down. According to the boatman, when you lift the fish with your rod and then reel with the rod point down, you allow the madai to fall back into the water, this will at certain times dislodge the hook, if you did not manage a good hook set. His words of advise were to remain calm and reel, maintaining a constant tension on the line. If the fish runs, hold on and reel once he stops. When asked, what to do if it was a big fish running for cover, he smiled and said, 'when the fish is big all bets are off. You either land him or you don't.'
He showed me some pictures of his big catches with his Ryoga reel. Just remain calm, reel and maintain constant tension on the line he repeated.

What to do if you get snagged. Release some line and start flicking your rod up. You have to be quick as the boat is drifting. This is easier to do with an overhead reel as opposed to a spinning reel as the bail arm will be a huge hinderance. If that fails, thumb the spool and try to bend the hooks. If all else fails, bye bye madai!

How to tie and assist hook by Ljster Mark 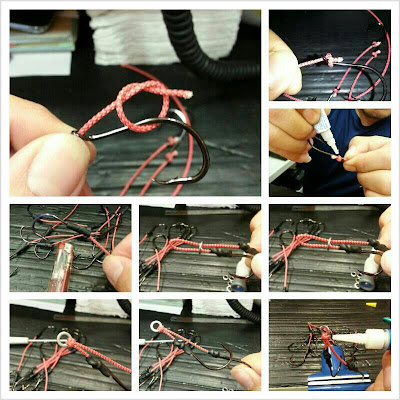 I've got tons of questions from newbies regarding pond fishing. I will cover that in the next post. I can't go fishing cos my arm is hurt. So i guess i better get started on that! :)