December 01, 2012
Jith and i had booked a Sampan fishing trip awhile ago with Jeffery Tsen. I almost had to cancel the trip due to some family emergencies. My dog is very ill and my Dad is due for a spinal surgery. So after two sleepless nights and two very busy days at work. Jith and i made our way to SAFYC in Sembawang to meet Jeff.

Prior to that night, Jeff had already told us about the gear and rig required for the trip. THIS IS IMPORTANT. If you do not have the right gear, you will not be able to fish the terrain he takes you to.


Here is a rough list of what you need.

Rod: 4-5ft Any longer and you will cast way beyond your target and into the surrounding trees, rocks pillars etc. ( I was using an AJN Stealth Carbon rod)
Reel: He recommends a 500 size or 1000 size reel with 10lb line. ( i was using a 2500 Sustain with 10lb spider wire.)
Hook size: Size 1 or Size 1/0. Do not bring anything bigger. You will also need a barrel swivel and a small split shot.


This is how i was rigged up.

The barrel swivel acts as an additional weight, when you are unable to use a split shot in certain areas which are full of rocks and snags.

So we made our way to his sampan and loaded up the gear. He then gave us a briefing. The heaviest person sits in the middle on some hard foam pads. You have a metal bar to lean against and you are responsible for balancing the boat. In this instance, it was me. The person in the front, would sit on a slightly elevated wooden block and was responsible for dropping and retrieving the anchor. Jeff sits at the back and controls the trolling motor.

We set off, to the first spot which wasn't too far off where we launched. It was a concrete structure and we had to use a split shot to get the prawn to where we wanted. The style of fishing is to cast slightly before your target and let the current drift your prawn into position. Then, we SLOWLY spin the prawn. We fished here for an hour or so, but there wasn't much action. We proceeded to the second spot after that. On the way there, we saw so much rubbish drifting inshore with the current. There were also mullets splashing about on the surface. Here, we had to fish without a split shot as there were many rocks below. 20 minutes in, i heard a reel screaming. Jeff was on! And what a screamer it was. We had to draw in our lines and up the anchor, as Jeff gunned the sampan into open water. But something was wrong. Jeff's line got tangled up with something and the fish got away. He was on a 500 size reel and 6lbs braid. By his estimation, the fish was about 4-5kg. We re-positioned the boat and tried again. This time i felt a slight tug, much like a life prawn kicking. My bait was gone. Re-baited and casted again. This time i felt the tug, and slowly readied myself for the strike. Fish on!!! He wasn't very big, about 30cm. It was a Fingermark Snapper. Jeff, Jith and i had a couple more misses at this spot before we moved down the bank. At the second spot, which was a few meters away, Jith hooked up a line which was tied up to a series of nets. Jeff, said that this line could be the reason why he was busted off earlier as these nets span quite a distance.

Jith and i were not used to using such small hooks and were striking a bit too early. This resulted in severed prawns and missed hook ups. Jeff, hooked up another Fingermark Snapper. This time he was landed. Table size and just nice for dinner. The bite rate is better when the prawn is alive. A dead prawn draws no interest from the fish. We moved on at the next spot and i got snagged. After some yanking and pulling my hook got free. I did not notice that the hook had opened up, and this was going to cost me dearly in the next few minutes. I made an almost perfect cast to within a feet of the rock. As the prawn was sinking i was twitching and spinning when BOOM!!!! Fish on!!! And not a small one either. I did not strike hard the first time as the fish took me by suprise, and the fish began running. A couple of seconds later when i struck for the second time. The fish bolted in the opposite direction and then nothing! As i reeled in my line to re-bait, i was muttering under my breath. Then i saw that the hook had opened up. Note to self, check hook after every successful snag recovery.

As we moved further down. Jith was getting snagged and busted off quite frequently. Jeff said that he wasn't spinning fast enough. I guess he sped things up a little and was rewarded for his obedience. As i made a cast, i saw his rod curve into a beautiful bend. I reeled in my line, and helped with the anchor duty as Jith had his hands full. Enjoy the fight and tire her out, Jeff called out to him. A little while later, up came a 2-3kg catfish much to everyone's surprise. Jeff had initially thought that it was a grouper due to the nature of it's resistance. Well, no Zero Fighters tonight then. While Jeff was taking care of the Catfish's poisonous tips. Jith casted out, put his rod in the holder and took a drink. Seconds later, the line was screaming out of the reel and the rod tip was almost in the water. This was a tough fight as the fish swam towards the back of the boat. I guess Jith panicked a little and forgot to lower the rod into the water. The fish went round the trolling motor and the line got tangled pretty bad. The fish managed to throw the hook and get away. Jeff had to dismantle the trolling motor to clear the tangle. I had passed my rod to Jith as i was holding on to his rod while Jeff freed the propellor from the tangle. He was on again! This time a small Barramundi had taken my live prawn. But it managed to throw the hook with a couple of jumps. This proved to be the last action for the night. Although Jeff had some misses at some other spots. Jith and i were zoning out from fatigue. We got back to shore packed everything up and drove back home. In our tired states we forgot to take pics!!! We'll be back another time to give it a go again. But for now, you can have a look at some of the catches from Jeff's past few trips.


Jeff with his big Barra 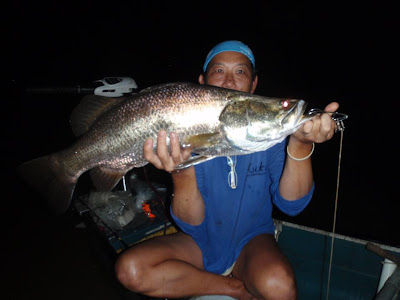 Couple a days ago 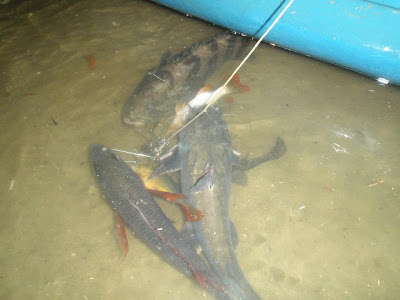 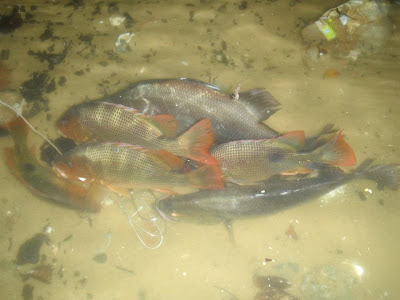 For those who want to go on his boat. The cost is $80 per pax. Minimum of 2 persons and a max of 3 depending on the combined weight. 1kg of live prawn is provided. I believe there is a promotion for 2013 dates at the moment, If you book 5 dates, you get 1 free. Paying a 50% deposit is required to secure your slot.
*Wear dark colored clothing*
Send me an email at isaiah@teamsaltheads.com if you want his contact.

I have a couple of tickets left for the Saltheads Challenge on the 22nd of Dec at Dave's Pond. I hope you guys can support our event. Thanks!