December 09, 2012
I had to deliberate a fair bit on whether or not i was going to fish this weekend. My beloved pet dog, drew his last breath in my arms a week ago. He was 14. All i had left were happy memories of days gone by and i didn't really feel like doing anything. I felt that maybe being outside instead of being home would ease the sorrow of losing my best friend. He never stopped me from going fishing or nagged at me when i came home late from fishing anyways. ( My mum and wife occasionally do that!) I didn't inform anyone of my fishing plans. (sorry guys.) But I told Sam, that i would be fishing and he said he'd join me since we had not fished together in awhile.

I woke up pretty early the next morning and set off at about 6am. One traffic light away from the pond, I saw a familiar car in the distance. The Megabass sticker confirmed that it was Carl. So i drove in and set up my gear close to the fence area, while Carl was setting up at the goalpost area. The water was not as clear as it was 3 weeks back, but it was still pretty good. I did however, notice plenty of small brown crabs at the edge of the pond. I thought nothing of it and went about my fishing.

Nothing at the first spot. Shortly after, i heard a whistle, Panjang as usual got the first fish of the morning. It was a Mangrove Jack. He walked over and dropped it into my basket. I thanked him and went to my 2nd spot. Here, i had a take just after i cast out. But my line was slack and i could not set my hook. Re-baited and went back to the same spot. Took me 3 tries to hit the same spot. But it was a goalkeeper. The fish came up to grab the prawn as soon as it hit the water. Fish on! As i was close to the fish net area, i had to run towards the platform to pull the fish out. It was a Golden Snapper. I had hooked him on his tongue and he was making a bloody mess. The prawn was still in it's mouth, so i re-used the prawn. Went to the same spot and tried again. This time i got snagged! WTF!!! new snags in an old spot????  This happened to me another 3 times. I believe this is the most i have had to burst my line and re-tie my rig. Panjang told me in the morning that, there were plenty of table sized Groupers released the day before. I thought i had gotten one of them at the 3rd spot when my line went tight near the ledge. I waited a couple of seconds and then STRIKE!!!! Absolutely nothing. ?????? It seemed like the line was stuck on the rock. !@#$%$##@! I had to walk a big round over to the other side and try to free the snag. With a little hard work i managed to yank my line free. As i reeled in, I felt a dead weight at the end of the line. To my surprise, i found a crab stuck on my hook. He was the size of both my clenched fist combined! Threw him in the keep net and carried on fishing.

It was almost 9am. I was getting my bait back in half with each cast. Looks like the crabs had come in with the water that they pumped in and were having a feast with the live bait. I guessed that Sam had overslept. Carl and his buddies from Team AA were chilling out at the goalpost area. Not much bites for them either. In fact only Panjang kept getting fish at his spot before fish release. I had been chatting with another angler named Eddie. He was an occasional visitor to the pond. I was admiring his Ryoga and we hit it off. My wife showed up with breakfast in hand to surprise me. And Sam arrived shortly after.

As we were setting up another familiar face showed up. Ken, the winner of the Saltheads Heaviest Catch and his friend Chang arrived and set up beside us. Then Andy, Melvin and Sheng from Siow Chiang showed up!

Fish release time. As Panjang set off in his little boat, the angler lined up rods in hand. Waiting to cast out. I was behind the goalpost area next to the fence. Once Panjang, released the fish, the guys at the Goalpost got first blood. There were only 3 hook ups on my side. And like the regulars, i was scratching my head. The fish had dispersed rather strangely this time. My first fish after release came right in front of my keep net. Up came Golden Snapper. Sam got his first right next to me. Soon there were people squeezing in next to us. Sam went off to another spot, while i stayed put. Saw Ken's friend hook up a nice Goldie. Sam came back with one and i hooked on to one as well. The fish were pretty scattered. Sam got another Golden Snapper. I went off near Panjang and set my float down there. Hooked up one almost instantly. As i was unhooking the fish, i heard a Hello. Turned around and saw Glen, another angler i had befriended while fishing at Dave's. He helped me throw my fish in and we caught up a bit. He had fished the day before and was telling me the species released directly into the pond. I passed him my rod as i went to do something and when i came back! Glen had a fish waiting for me. Thanks Glen! The spot was not productive after that so i moved back to where i was originally at. Hooked on my last prawn and threw it nearby. The line went taut almost immediately. Strike!!! Fish On??? Up came a little grouper. This little bugger had another hook in his mouth and he had managed to burst off someone else yesterday before gobbling up my prawn. That was the last fish for me.

As i waited for Sam to end his session, I was quietly thinking to myself. I had felt so guilty over the last few days, as i felt that i had spent more time fishing than i had with my little dog. But as i sat there, sadden by the lost of one friend, i realized that i had made plenty of new friends while i was out fishing. And in my heart i know that my little buddy wouldn't hold it against me for dealing with my grief the only way i could... Among friends.


Rest in Peace old friend. I will miss you dearly. 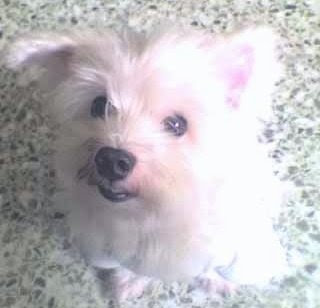 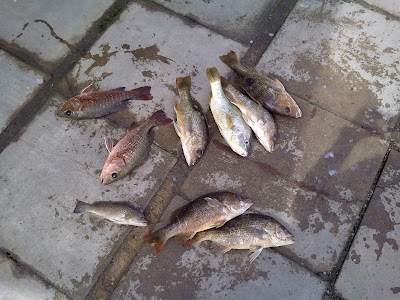 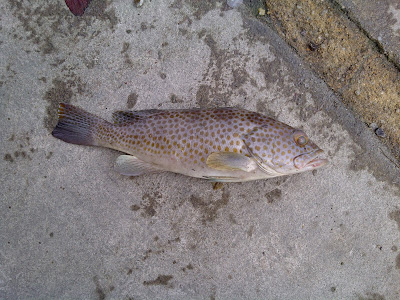 I have 5 tickets left for the Saltheads Challenge on the 22nd of Dec.
You can purchase them from G-Tackles at Simon Road or
from me directly. Call me @ 92981083.  I will give you a free gift on top of the Rapala door gift.