December 30, 2012
End of the year has been a busy time for me. So when i had the opportunity to fish, i tried to make it count. Woke up before dawn and picked Jith up and headed down to chase some Temensis. Decided to use the Rapala twitchin Rap that i got from Carl awhile back. Nothing in the first 10 minutes. Jith had first blood, while he was taking a picture of his fish i saw one chase my lure and slam it hard. Brief fight. Landed one about the same size as Jith's. We saw a 10 pounder later in the day but he wasn't interested in our lures. Had to call it a day shortly after that as time ran out for us to fish in peace at the spot. :D

Unsatisfied with the lack of action i headed to Panjang's pond after dropping Jith off. Got there with 5 minutes to fish release. I decided to go with my luring set up since it would take some time for me to get my spinning set up ready. Fish release time! 4 in the basket for me in about 20 minutes. The i spotted a lone Grouper. The guys who were fishing near it said that the fish was not interested in their live prawns. I walked back to my bait well, took out a big fat milkfish and hooked it on. As i walked back to the spot i saw the other people landing a fair bit of Snappers. The Grouper was still there when i got to the spot. The uncles around me kept telling me not to waste my time. I threw my milkfish in and slowly dragged it to where the Grouper was. He turned away. Tried again. This time i jerked the rod a little bit, making the milkfish shoot up and flutter. Boom! He ate it and did not move. I politely told the uncles to my left and right that i had the Grouper eat my bait. The one on the left reeled in his line, and told me to go for it, the one on the right just stared at me and went back to watching his float. I felt the line going tight as the fish slowly swam towards the guys float. I asked him again if he would mind moving just a little bit so i could bring the fish up. Again no reaction. I had to strike and fish on! I thumbed my spool and yanked as hard as i can and tried to pump the bugger up. I felt my thumb burning. I managed to turn his head briefly, but he got tangled in the other guy's float. (which was what i was afraid off.) To make matters worst, the uncle's hook got stuck to the ledge. The Grouper managed to get into the hole and bust me off. The angler too my left shook his head in dismay. It was a big one. Looked to be around the 3-4kg range. I did not look at the guy who ignored me.

I walked back, and re-tied my leader. As i hooked on another milkfish. I saw a swirl in front of me!!! Some one said it was a Grouper. Tossed out my milkfish and barely 10 seconds had passed and my floater sank just beneath the surface and stayed there. Grouper i thought. Strike!!! Fish in!!! But it was an impostor!!!! Up came a feisty Golden Snapper. My neighbor and i had a good laugh about it. Re-baited and tossed out my milkfish. As soon as the floater hit the water, it went down. Strike!!! Fish On!!! The fish was taking line out and going towards the middle of the pond. I thumbed my spool and pumped as hard as i can. For a moment i thought i had hooked on to one of those big Goldies which broke my Gloomis. Then i saw a black figure emerge! Grouper! I had his head out of the water but he managed to get entangled with one of the bait wells. My neighbor was kind enough to help me grab him out of the water! Panjang started whistling!!! hahaha. He ran over and told me, 'You better bring home!!' ( He doesn't seem to understand why i some times give away what i catch. My freezer is full!) He claimed that it was a ' Tiger Grouper ' and cost a fair bit of money. Nodding my head i threw the big guy into the keep net. He was about 4kg. As i was joking with my neighbor, i saw another one swim up!!! I sent my milkfish down and told my neighbor that this one was his if i landed it. Chomp!!! Strike!!! Fish On!!! This one was a dirty bugger. As soon as he felt the hook, he shot down into the ledge. I tried my best to keep him out of the ledge, but he kept powering his way back in. I thumbed my spool and got him out, but one last burst from him into the ledge and the leader broke. !@#$%$#@! My thumb was burning.

I hooked on to my last milkfish and staked out along the ledge. I knew that these buggers were lazy and usually stay close to where they were released. I heard my phone ring and i went to answer it. Nick was  coming to visit. Just as i hung up the phone the float shot down. Too late, he was already inside the ledge. I ran to the other side to try to get him out but he had taken too much line and the braid got cut off on the ledge. Damn It! 4 hooked on and only 1 landed! I gave my neighbor all my Snappers and sent the Grouper to my mother in law. Then i posed for a picture with my very first Tiger Grouper. 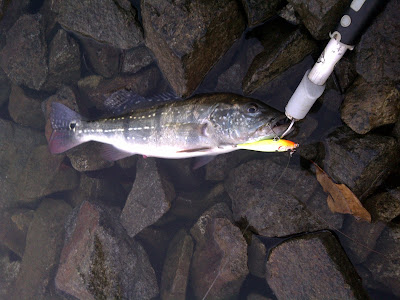 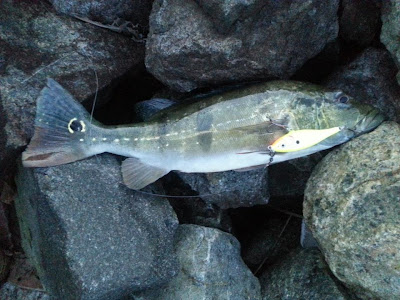 Donated to my kind neighbor. 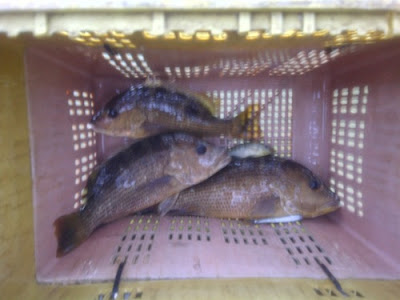 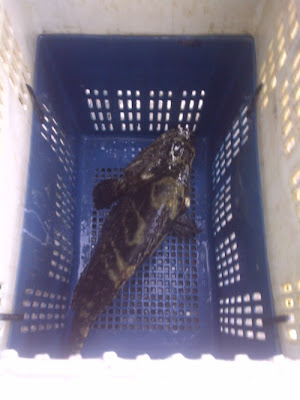 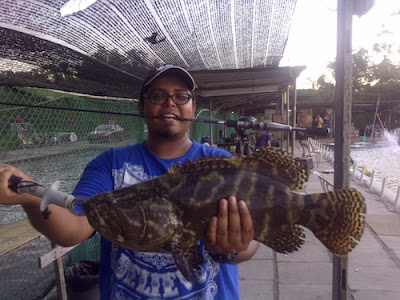 I have another photo on Facebook, while i was posing for this picture. My neighbor's float went down he was busted off by another Grouper. It looks damn funny. Check it out here