November 18, 2012
I couldn't sleep despite being extremely tired, so i met Jith at 5.30am and we went to McDonalds to have breakfast. About an hour later we reached the pond. We were quite surprised to find two guys fishing there. After making some small talk, we found put that they had been fishing from 1am and had landed 4 snappers. Panjang told us that a lot of Barramundi were released into the pond. Ranging from 1 to 4kg. Told us that white colored rubber lures were most effective. Jith proceeded to hunt the Barra with his white lures and had a couple of misses in the first few minutes. I decided to go look for some Red Snappers. Nothing within the first hour. Some other anglers arrived and within 30 minutes began lamenting on the poor bite rate. I think they pissed Panjang off cos he began fishing. He had a Golden Snapper within 5 minutes. He tossed it into my basket and grabbed another prawn from my bait well. Moved to another spot, and fish on again. As i was across the pond from him, i observed that he was glaring at the group that complained each time he had a fish on. After throwing the 2nd fish into my basket, he went to a third group and told them where to cast. Amazingly all 3 of them had a fish on in the next 10 minutes, with one Barra throwing the hook. As i walked around the pond, i spotted a Barra taking refuge behind the pump. Tossed out my prawn to him and waited. He took a sniff and swam away! !@#$%$#@! By now the sun was up and Leonard and his wife arrived.  As they were setting up, i had a take but failed to set the hook. I went to talk to Morgan at the C&R pond for a bit and when i got back Jith had landed a small Barra.

As the morning went by, the heat was becoming unbearable. At 9.30am it felt like we were under the mid-day sun. William dropped by and we were having a chat when Panjang announced the fish release. As we were initially at the goalpost area. We casted our rods out and waited as he released the fish. The fish decided to take a different route today, so i had to move to the fence area. The regular uncles had already taken the hot spot and shortly after began hooking up some fish. I waited for a hole in the wall before squeezing my prawn in between. I was using a spilt shot rig without a float. As soon as my prawn hit the bottom. Fish On!!! Golden Snapper landed. William, kindly offered to be our deckie and assisted in unhooking the fish. Reloaded and went to another spot as the area got crowded. Good move. Tossed the prawn in, Fish on!!! Landed another Goldie. I wanted a Red Snapper. Moved to the middle spot and lined up next to my favorite Ah Lau. Double Hook UP!!! A Red for me and a Red for him. :)

Three fishes in 10 minutes. The area was at was getting crowded, but people were landing fish all over the pond. Re-baited and tossed my prawn in. Tug. Strike!!! Fish on! A Mangrove Jack which managed to get into the ledge and damage my leader. Got him out with a little manoeuvring. As William unhooked the fish, i noticed the leader was a little damaged, decided to risk it and carry on fishing. Tug. Tug. STRIKE!!! Fish on! Another Mangrove Jack, this one busted me off when he went into the ledge.  Damn it! Lucky for me Leonard's tacklebox was nearby. While i was re-tying my hook, I saw both Jith and Leonard hooking up and losing fish. The fish were not biting very aggressively today. You could only feel a very subtle tug, and if you were using a bigger split shot it was harder to detect. I re-joined the action only for an unknown fish to take me into the ledge and burst my line again. !@#$%$#@! Had to re-tie my rig again. As i quickly went about tying my rig, Leonard landed a nice Red Snapper. Jith was hooked onto a pretty big fish, and it turned out to be a Barra, despite shouts from the regulars that it was a Grouper. (any kind of drag peeling action and they automatically assume that it is a Grouper. ) As i went back to the spot, a regular they call the 'Assassin' arrived and took his spot next to me. He landed a few snappers on his white rubber. As we were both fishing in the same spot, the banter soon turned into a mini one-upsmanship match. He changed to bait and it was on! I missed much to his joy and when he missed i laughed right back. As he went off to re-bait i got a hook up. He rushed back to tell me i was going to lose the fish. Not this time! Haha, landed another Golden Snapper. We re-baited and went at it again. Double Hook Up!!! This time he landed a Golden Snapper and i was cut off again by another Mangrove Jack. The heat was sweltering. After an hour, i decided to call it a day. 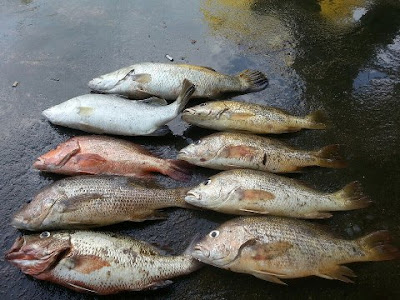 I should be at the C&R Pond to pass the tickets to participants of the SaltHeads Challenge. Maybe i might do a little fishing while waiting.