October 28, 2012
After a couple of offshore trips the past few weeks, i decided to pay a visit to Panjang's Main Pond. Jith decided to come along but not fish as he claims he wants to take a break. I picked him up at 6am, got some food and Panjang's coffee and off we went. We were the first anglers at the pond. Panjang told me the fish were biting and that there were Kaci or Painted Sweetlips inside the pond. He also said Rubber worked well.

I rigged up a White Panther Martin Lure and proceeded to my favorite spot. The water was quite clear and i could see some activity below. I dropped it straight down, and bounced the lure off the bottom. The Snappers started getting curious, and surrounded the lure. Boom! Fish on! A nice red had taken a fancy to the Panther Martin Lure. Unhooked the fish, threw it in the basket. Went back to the same spot and there were still some fish there. This time they did not react to the lure. As i was about to try another presentation of the lure, a fat Golden Snapper's greed got the better of it! Fish on!!! but alas, the the hook set was not good, and the fish dropped the lure as i got my hand on the leader. Decided to switch to live prawn on float( Live prawn was very limited on that day ) and hook up the group of snappers. Prawn went down and the float bobbled instantly. Strike!!! Fish on!! Up came another Red Snapper. Re-baited and tried again. Fish on! Up came another Golden Snapper but i lost it as i grabbed the leader. This happened another 2 more times!!! !@#$%$#@! Must have become rusty with the pond skills. A few other anglers had arrived and joined me at the spot. One lucky angler got himself a Kaci. So my spot was becoming very crowded. Most of us were losing fish due to poor hook sets. The fish were being a little finicky. They would take the bait and the float would bobble, go just below the surface and float back up. After the 3rd or fourth bobble the bait would be gone and the angler would just strike early the next time the float bobbled, resulting in poor hook sets. Some of the guys, took out the floats and got better results. I moved away from the group to another spot. Leonard had arrived and was waiting for the live prawn to be replenished.

After a couple of minutes, i saw my float bobble twice. then it moved towards me and stopped. The float was just beneath a few inches of water. I knew in my heart what had taken the bait. I tightened my drag and gave a hard strike! There was a great tug at the other end of the line. I pumped and lifted until i got it to the surface. A big fat Grouper! In the 2-3kg range. The fish was hooked at the side of the mouth. I grabbed the leader, put my rod down and used my hand to try to lift him. As soon as i touched him, he bolted! Almost taking my rod with him. Before i could react and pump him up he had gone into the ledge and cut me off. !@#$%$#@! I looked at the frayed leader and muttered under my breath as i walked back. Panjang chided me for not using pliers! Oh well. While i re-tied my leader, Jith was using my luring set up and had two takes. But he wasn't able to set the hook.

Fish release time. We were at the goalpost area but the fish went the other way. The guys at the fence area were taking turns landing them. As i was about to reel in my bait, i got an sms and i passed my rod to Jith. I replied the sms and looked up to see that Jith was on! Went to the fence area but i got nothing after 30 minutes. The weather was getting unbearably hot, so i went back to the goalposts area and took refuge under the umbrella. The bite became sporadic. But people were still landing fish. Leonard, got 4 in a row as he braved the heat. He urged me to join him and i did with my last live prawn. As we stood at our spot saw the fish swim by. Leonard who wasn't using a float was on!!! A 5th Golden Snapper for him. As he went to re-bait, i took out my float and just let my prawn sink to the bottom. There were 3 Snappers swimming infront of me but not taking my bait. Leonard returned, and i was about to go back to the shade when he pointed to them returning. Boom!!! Fish on!!! I had hooked a Golden Snapper. But this fish was so strong, that it actually went into the ledge even though i had a high drag setting. And as much as i tried to yank him out, he wouldn't budge. A fellow angler advised me not to pull but to wait, with a slight tension on the line. After a few minutes, there was still no sign of my fish coming out, and everyone thought that i had got a grouper. I knew better as i saw the fish. I tried slowly to pull the fish out maintaining a light tension. Impatience got the better of me and i gave the line a hard tug. Worked like a charm as i saw a couple of fish shoot out from beneath the ledge. The fish on the end of the line looked small but felt heavy. As i got the fish to the surface, i saw that i had hooked onto a fish which was tangled up with 2 other fish. I couldn't see this earlier because the leaders on both the other fish were Fluorocarbon. ( See FC really works! It fooled me!) As Leonard helped me pull up the fish, the rest of the anglers gave me a round of applause. I smiled sheepishly and told them it was a fluke. Panjang was grinning and told me it was the first time someone had landed 3. 'Grouper burst but you land 3. Must buy 4D.' he said. After a couple of minutes being the "BUTT" of everyones' jokes. I called it a day. The title of the post was Jith's first words to me as i walked back sheepishly. Not bad for a hot day's work. Leonard ended his session with 5 Golden Snappers. I heard from Panjang later that 2 other anglers landed 10 each! ( he was asking me to fish again the next day.) The bite rate has become excellent since they switched to the "Live Bait Only" rule. I will be back to give it another go once i am back from Bangkok. Till then, Tight Lines! 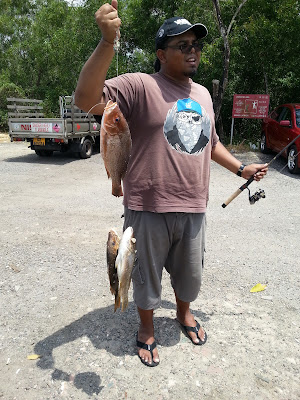 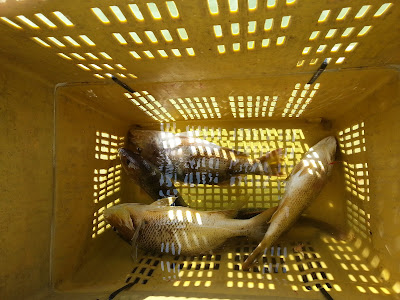 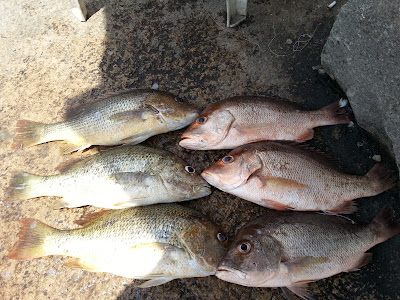