October 24, 2012
Just got back from our last trip to Desaru for the year. We were quite fortunate to have good weather the entire day. Jith, Vina and i drove up this morning and after a wrong turn (too busy chatting) we finally reached our meeting point at 7.30pm. Mr Badol rolled in shortly after that and introduced us to his new deckie Zam. Since our regular food stall was closed, we went to pick up some food at another stall while Badol and Zam went off to the beach to 'bleed the steering'.

I was informed before we set off, that we might not travel very far today as the monsoon has made the weather very unpredictable. We got to our first spot 30 minutes later and found some Indonesian fisherman on a wooden boat fishing for baitfish with sabikis. They told us that there were lots of 'Ikan Bawal' (pomfret) around and true enough they were swimming round the boat. Badol told us that it would not be easy to catch them without a net. Oh well, back to what we usually do. Vina and i were jigging while Badol, Zam and Jith were jigging for baitfish. Chencaru and Selar were around but not as plentiful as the last trip. ZZZzzzzzzz, Jith's reel went off. Short fight. Sabiki gave way. The work of a Tenggiri. He sent it down again and this time he got a baby cobia. (he threw it back) Vina lost 2 Tenggiris in quick succession. They bit right through his assist hooks.

Pretty soon the 3 of us were jigging and the boatman and deckie were catching baitfish. ZZZZzzzzzz Jith was on!!! He brought us a rather different looking tenggiri which Badol told us was called Tenggiri Bunga. Vina lost yet another jig, this time on the surface. He saw the Tenggiri chase his jig and bite the whole thing off. Jith and Vina lost a few jigs to the toothy buggers. The Indonesians got 2 big Tenggiris on bait. Which got Badol excited. He hooked on a Kembong and sent it to the bottom using his hand line. Boom!!! Fish On!!! Up came a fat Tongkol!!!!  Zam got another small Tongkol on Sabiki. It was pretty quiet for me, aside from to hits which i failed to set. As i took a break and got something to drink. Badol gave me a little tuition about how i should have set up my terminal tackle. He is a really sincere guy, and if you fish with him, you will learn a lot. Once i corrected my rig, i was on!!! No fight, but some fish was tugging away on the end of the line. It was a Chencaru, and a big one. I hit another one shortly after and was teased by all the other fellas on the boat. Nothing else was happening so we went to our second spot.

Within seconds of dropping the anchor, we heard a loud horn blast from the tanker nearest to us. They continued to do it three more times, and then some guy popped up his head and said something we couldn't make out. Badol gave us the signal to jig. Boom! Fish on! On the first cast! Up came a Jemundok. ( it is a member of the trevally family) Hahahaha finally a note worthy fish for me. Vina lost yet another jig here. (Poor fella) a little while later i was jigging next to Jith. As the jig got closer to the boat i ran outta room to jig and i just let the jig suspend in the water. Out of nowhere this Cobia shoots towards the jig hits it and swims off. We were having a WTF moment when it happened again. Then all hell broke loose. We were getting Cobia on jigs, live bait and even sabiki. We threw back the little ones, cursed at the ones that got away. There were many Cobia that were lost on jig. These were usually taken on the drop and got away due to an improper hook set. 90 minutes later the frenzy stopped. We were having lunch when Badol hit a Cobia on jig, seconds later Zam hit one on a sabiki. Jith who was next to Badol had a strong take. TRIPLE HOOK UP!!!! Badol's Cobia was landed first. Jith was on a good sized Cobia. It turned out to be the biggest of the day at 6kg. Zam's weighed in close to 5kg. Pictures followed and then back to fishing. Vina was telling Jith that the Cobia that got away must have told the rest of the Cobia below not to eat silver jigs. He took out a PINK jig and said lets see if this one will get them. First cast. 3 strokes later, Fish On! Another Cobia! After this we decided to call it a day and as we took some photos of the catch and packed up our gear,  Zam got a hit on live bait. What else but another Cobia. We had 10 Cobia in total in the cooler along with Jith's Tenggiri, Badol's Tongkol and my Jemundok. An unexpected but happy ending for our last trip to Desaru for 2012. 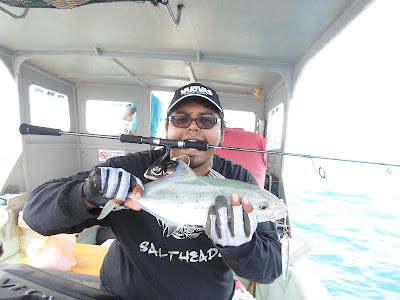 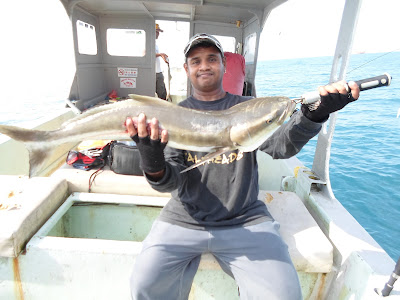 The brute opened up his splitring 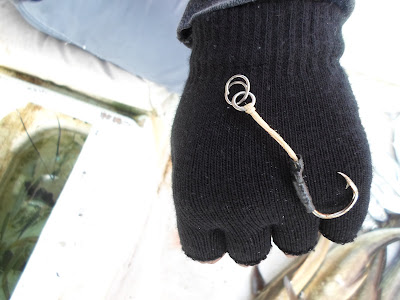 Vina and his Pink Jig 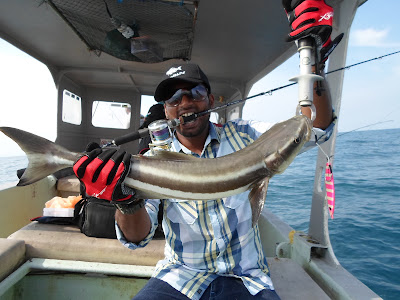 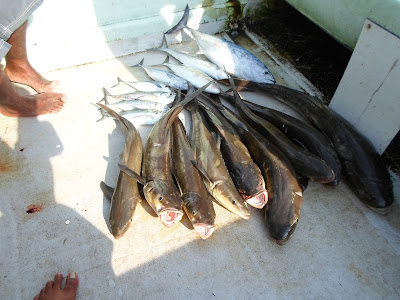 The other fish we caught. 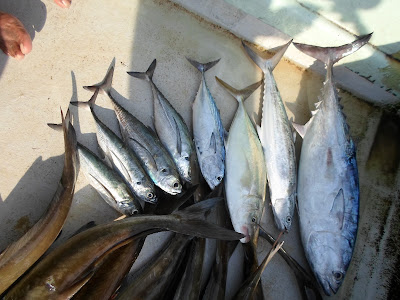