October 16, 2012
A friend of mine recently gave me the contact of a private freshwater pond owner. So Jith, Carl and his son Colin, Sherwin and myself decided to give it a try. When i called to make a booking, i found out that the pond belonged to the guys from Ewaves Fishingbyte. We were told that there were Toman, Catfish (including RTC), Gar and Temensis in the pond. Lures with single de-barbed hook, or circle hook with wire leader if you are baiting. I guess they are renting the pond from Punggol Aunty as you have to go past Punggol Aunty main pond and pro pond to get to the FW pond.

We arrived early on Saturday morning and set up our gear while, waiting for Aaron to arrive. Once he arrived we took a short walk to the pond. We could see some action on the surface. Lots of rises and splashes. So we picked a spot each and casted out our lures. 30 minutes in there was still no fish landed. Nick showed up to take some pictures. I had a strong hit on my Surecatch Pagrus. Fish On!!! But as soon as every one's attention was on me, the fish was off. Damn it!

I stuck to the Pagrus, while the rest were try out various different lures. On the hour mark, Jith who was using a spinnerbait he got from Desaru for 5 Ringgit had a hit. I was next to him so he called out to me. As i walked over to him, he yelled that it was off. Just as i was about to walk back to my spot, he yelled, ' It's on! It's on!' After a brief fight, he landed a Catfish. I'm not sure what the name is. But we landed the first fish after and hour.

2 hours in, we still had not landed anything else. Sherwin had a take on his deep diver but failed to set the hook. The guys decided to change to bait, which was provided by Aaron. Nick came and asked me to bait as he wanted to take some pictures before he left. I told him to give me 10 minutes to get him a fish for a photo. I changed to my trusty Zerek Barra X and squeezed between Carl and Jith and cast out. On my first retrieve, BOOM!!!! Fish on!!! It was a Gar. (there are only 2 in the pond and i got one) Colin was asking why the fish wasn't fighting. I told him the fish was lazy! Hahaha. Nick snapped a few photos and Aaron let the fish go. (The hook was set right in the snout and he had some trouble getting it out.) Sherwin was on next. He was using a Tamban and he hooked on to another Catfish. One last photo for Nick and then he went home. The last hour was excruciatingly hot. There was no bites even for the bait.

20 minutes to go. Jith had switched back to his spinnerbait and was luring with me, while Carl and Sherwin had pretty much given up on the baiting and were looking at the creek next to the pond. As they were walking back, Jith had another hit on his 5 ringgit spinnerbait! Another Catfish. This time though, the fish got away as Aaron was trying to net it. Bummer! Well that summed up the trip. We left shortly after that. Going up to Desaru for one last trip for the year. Stay tuned. 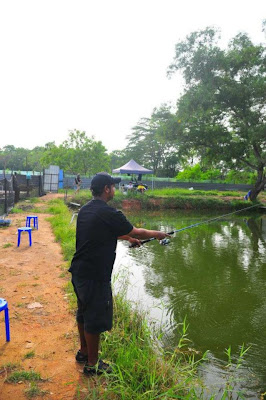 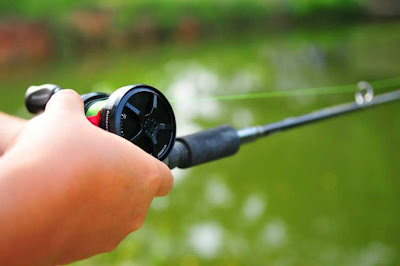 Jith's Catfish on his spinnerbait 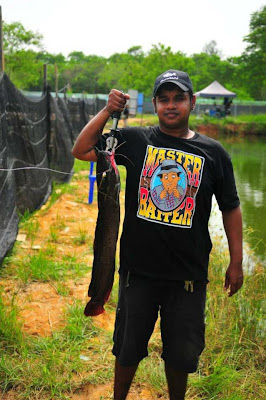 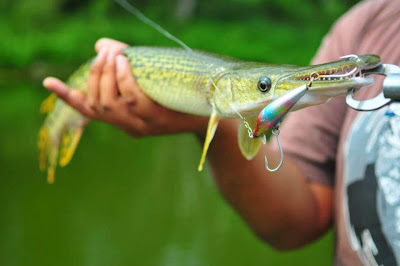 Not a very big Gar 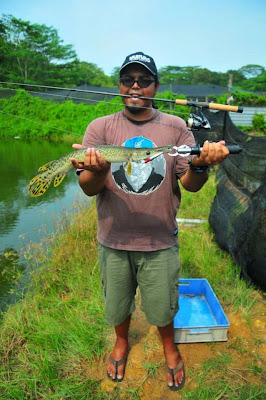 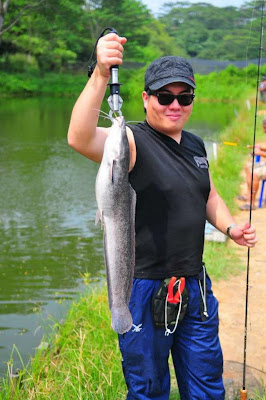 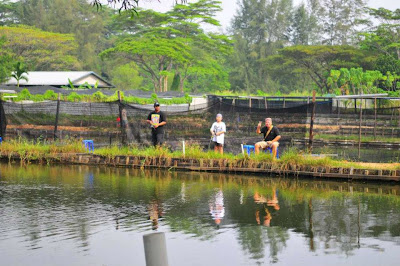 Colin having a go at the fishes 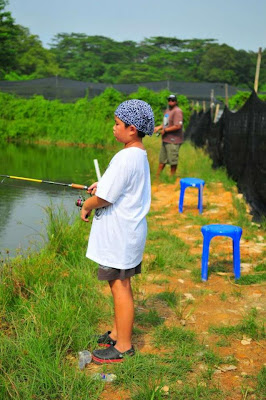 Carl and Jith Baiting as Colin looks on. Me luring in the far end. 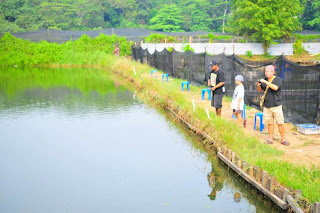 *All photos courtesy of Nicholas Teo.