October 12, 2012
Part 2 of my birthday bash saw Jith and me head up to Desaru for some Jigging. We were targeting Tenggiris. It was my first time driving up. (Kenneth usually drives) Reached Desaru at about 7am and waited for Badol to arrive. He rolled in with his boat in tow on his 4x4. After breakfast and getting our supplies, we headed to the beach. Loaded up our gear quickly and off we went to the first spot at 9am.

30 minutes later, we arrived at a tanker. The sea around us was teaming with baitfish. Jith started jigging for some baitfish as Badol and i started jigging. There were plenty of Selar and Chencaru around and Badol and i kept foul hooking them with our jigs. Jith was landing countless Chencaru, which went into the ice box and a handful of Selar. Badol was on!!! The fish managed to get of the hook just as it hit the surface. Didn't matter as he was on the next try. Landed a nice looking Jemundok. (his fav fish) Meanwhile, i had landed about 10 Selars on my 80g jig. (foul hooked of course)

Then it began. Tongkol or Bonito arrived and were feeding in a frenzy on the baitfish around the boat. Badol and i jigged like there was no tomorrow. Badol, was using a silver jig, while i was using a green jig. Badol was on!!! Up came a nice Bonito. He told me to change the color of my jig to silver. First cast with the silver jig and i was on!!!! But up came a Tenggiri!!! Woohoo!!!! The Bonito were everywhere but the annoying thing was that we kept foul-hooking onto the baitfish. Jith, who was lazy decided to send out a Selar, Ah Ping's style. Lucky bastard was on in an instant! Short fight later he landed a Bonito. This is where it started getting funny. Jith would let a baitfish swim out, put his rod down and jig for more baitfish with another rod. Then the rod with the live fish will bend and he will pick it up and strike it and then pass me the rod with the sabiki and proceed to fight the fish. The thing is, the fish always came off halfway. This happened so many times that Badol just told Jith to jig for baitfish. By now another Tengirri had been landed on jig and countless fish had been lost on the live fish rig. I decided to have a go at the live fish rig as i was getting tired. I let my fish out and was letting out line when i felt a tug. Quickly closed my bail and strike! nothing! Reeled in my line and saw my leader cut clean. Tenggiri!!! It happened two more times so i went back to jigging. The fish were around but they were making us work to catch them.

Jith was on!!!! A small cobia! The hook didn't set on this guy either. He let go of the bait as soon as he hit the surface. Bummer. Badol who had stopped jigging and was catching Chencaru by the dozens. (his fridge was empty he said)  I took a little break and decided to get some Selars ( my mum loves them but hate Chencarus) I got bites as the sabiki was going down. It was ridiculous, the amount of baitfish around us. The Bonitos had moved beyond our range, they were ignoring the jigs and the pintails and happily snacking on the baitfish. Suddenly i felt a hard pull, thinking that i must have gotten a full house of Selars, i began winding up. I was shocked when i felt a strong pull downwards, and line peeling out. I adjusted my drag and continued fighting whatever was pulling. Couple of minutes later i managed to get it to the surface. A Cobia!!! (it was about 3kg when we weighed it later.) I called out to the boatman and said 'Abang, Cobia.' He told me to lift it up by the leader. I told him i caught it on sabiki and he got the gaff and got the Cobia up. We all had a good laugh about how lucky i was that the Cobia co-operated. Badol landed a baby Cobia on jig and Jith landed another small one on bait. ( we released both small Cobia) After that we had lunch. 2 Tengirris, 2 Bonitos, 1 Jemundok and 1 Cobia by 1pm. Pretty good i guess.

After lunch we went to another spot. Here i lost a few jigs to snags. The biggest Tenggiri of the day was caught on jig during the drop. After a brief fight, it went into the ice box. (not before it tried to bite me) Badol then got a Grouper on jig. He was joking that he got the grouper because he was using a Grouper Sama rod. He sure is one funny guy to hang out with. I got another small Tenggiri on Jig and Badol lost a pintail to a Tengirri just before we called it a day. It wasn't a very fantastic catch but it was a pretty fun day. Hoping that i can squeeze in one more session before the season ends.


First one of the day for me 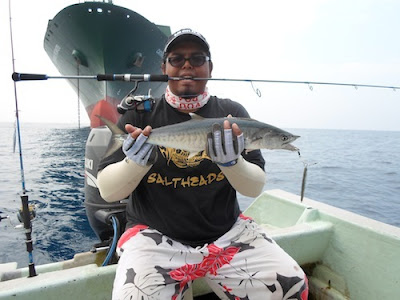 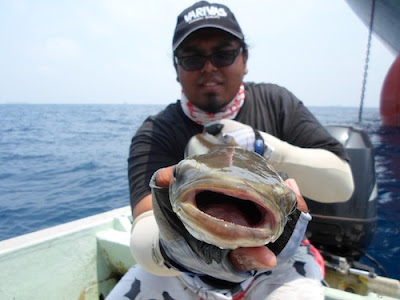 Last one of the day 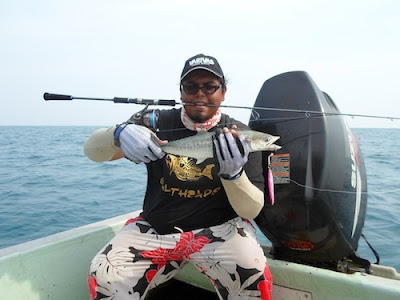 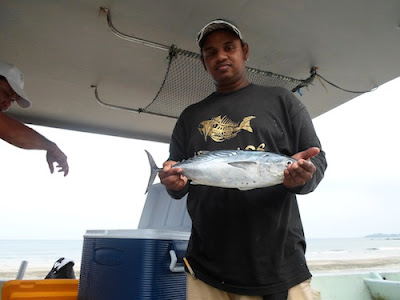 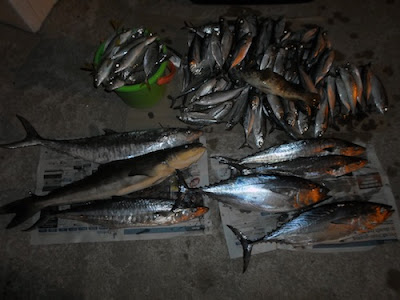