September 01, 2012
I have recently acquired some ZEREK lures from their new saltwater craft series. The two that caught my eye, were the Barra X and the Live Shrimp.  Today, i will be talking about the Barra X. They come in sinking and floating versions. They are available in  8, 14 and 22 grams for the floating type and 9, 18 and 26 grams for the sinking type. Both, have a targeted depth of 0.8-1.2 meters. There are a total of 8 colors available.

These are the ones i bought, you can see the other colors and specs here.

According to their website, the Barra X has been incorporated with a ' magnetic weight transfer system' which enables smooth and consistant casting. This is the first thing i noticed, when i took the lures for a spin at Dave's GT Pond. I started out with the 8g sinking version in the WS color. ( just cos it looks pretty!) I tried a couple of different retrieves. On the 5th cast, i was using a slow constant, retrieve with intermittent twitches. ( i remember it cos on the 4th cast i was pausing after the twitches and it kept getting snagged.) BOOM! Fish on! It was a Barra. After a short but acrobatic fight, i managed to land the fish. Posed for a photo and released the fish. My session was cut short after that due to the sudden downpour. 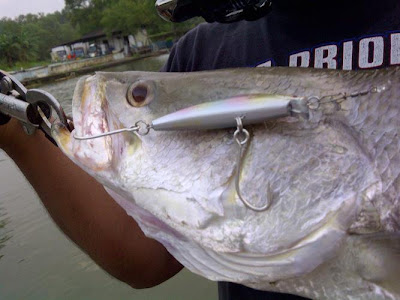 Unsatisfied, I headed out to Lower Seletar Reservoir, at dawn the next morning. This time, i was using the 8g floating Barra X in the KM color. I kept getting snagged in the hydrilla plants, due to the really low water levels. I remembered that there was a tip on the ZEREK website, which was to lift the rod tip while retrieving constantly. This gave the Barra X a sub-surface 'walk the dog' action. I saw some fish action near a clump of hydrilla about 15 meters to my right. I cast just beyond the hydrilla, and used the sub-surface walk the dog method. As i passed the hydrilla clump, I felt a half hearted thud. I continued with the retrieval and saw a Peacock Bass following the lure. It turned away as the lure came closer to me. I tried again, this time as i approached the hydrilla clump, i slowed down a bit and paused for just a second after i passed it. BOOM! Fish on! The fish tried to head into the weeds, but i managed to get him out and landed him. Took a photo and let it go. Couple of minutes later, it started to drizzle. Not again! i mumbled under my breath and walked towards some shelter. 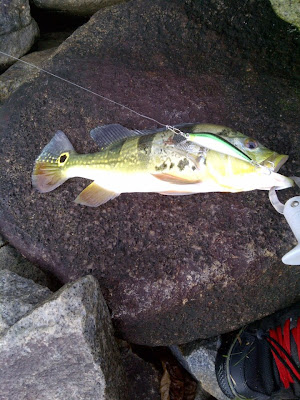 As i was walking, i chanced upon  an opening in the reeds. Decided to try for 5 more minutes, as i was about to cast i saw a splash quite close to me. About 5 meters to my left. Instinctively, i cast towards the splash. I realized that the water was not very high there at all and lifted my rod tip and used the sub-surface walk the dog method again. Barely 3 cranks later, BOOOM!!!!!! The take was extremely ferocious and line was peeling out of my reel. (due to the small size of the PB in LSR, i usually use a 4-8lb rod and a size 500 reel with 8lb braid with a loose drag setting.) I tightened my drag, but the line was still going out the fish was trying to go into the hydrilla. I was seriously panicking. I locked my drag, and pumped hard. I could feel the head shakes of the fish. A regular baiter, who i know was passing by on his bicycle came to help. He said, 'this one toman, if you can land you are very lucky.' After a few more minutes, the fish finally got to the hydrilla. But i managed to yank him out with hydrilla and all. My heart was racing in excitement. The old uncle helped me land the fish. Cleared the hydrilla, and had to position the lure properly for a photo. The old man asked me what i was going to do with the fish, and i said i was going to let him go. With a nod of his head, he let the fish go. My first Toman on a ZEREK Barra X! :) 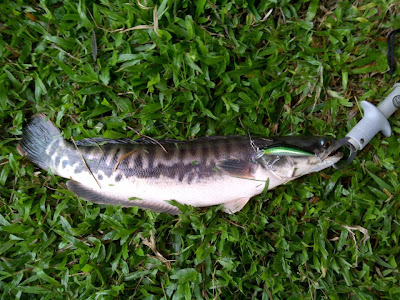 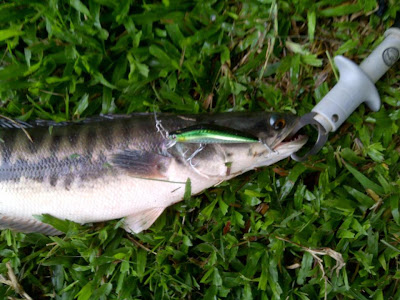 By this time it was beginning to drizzle heavily. As i was walking back, the uncle cycled alongside me and asked about the lure, and where he could buy it. I decided to give it to him, since i had another one. (More importantly, because he respected my decision to release the fish, and not scold me like some other dudes who fish there.)
Barra X Dave's GT Pond LSR Lure review Peacock Bass toman ZEREK