September 23, 2012
We decided to re-vist this pond to see how it was doing. Sam, Jith and myself were joined by William and his friend. Based on our previous visits, we decided that we'd try luring for an hour before baiting, to pro-long the feeding frenzy. Sara popped by to say hello before going to work. Just before we began our session, the Uncle threw in some dead bait to rouse the fish. Couple of Queensland Groupers, came up to entice us. William threw in his Daiwa Minnow and he was on! GT!!!  Fish was landed shortly. What a solid start! Jith was next with a Golden Snapper on a Maria Angel Kiss Minnow. Looked like it was gonna be a fun time. Sam had two takes on his Storm Shad but couldn't set the hook in time, before Jith showed him how it is done, with a $2 Rubber Shad. And what a beauty it was. A nice Grouper weighing in at 5kg. I had two takes in the first hour. One on a Rapala Fat Rap, but the hook didn't set well. The other was on a DOA grub. That fight lasted all of 6 seconds, as the fish managed to throw the hook.

As the first hour passed, the hits were few and far between. So we decided to switch to bait. We decided to have a little wager on the heaviest fish caught on bait. Right of the bat, William got into the lead with a 4lb Mangrove Jack. Jith hit back with a 6lb Barramundi. Sam, William's friend and i, had still not broken the duck. William was on again! This time it was a 10lb Barra. Took him straight to the top again! Sam hit a small Golden Snapper next. But today was the William Show! He was on again, this time with a Queensland Grouper. I hooked on to a fish next to him, so we were trying our best to land both fishes on the double hook up without any tangles. I managed to subdue a 4lb Mangrove Jack, but William got cut off by the Queensland Grouper. Sam, had another take but his leader burst off mid-way during the fight. William re-baited and cast out! Couple of minutes later, Fish On!!! Another Queensland Grouper!!! 2 minutes into the battle, Queenlands Grouper 2 - William 0. This one burst him off too! !@$%$#@! (That was his exact reaction! )

William's friend was having a tough time today. Despite getting hits, he was unable to set the hook. Him and i saw the least action. As the day wore on, the bites were few and far between. I passed my rod to my wife as i took a break, and she landed a small Barra. William got himself a nice 6lb Golden Pomfret, a rare catch as these fish are very finicky and elusive. Sam and William with another double hook up. Sam with a 10lb Barra and William with an 8lb Mangrove Jack! And that was it. No Queensland Groupers to pose with. But even though the bite was bad, the company was great. Enjoy the Pictures and Video!
First fish on Lure! 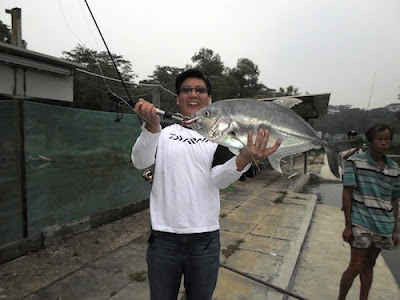 The only Grouper of the day 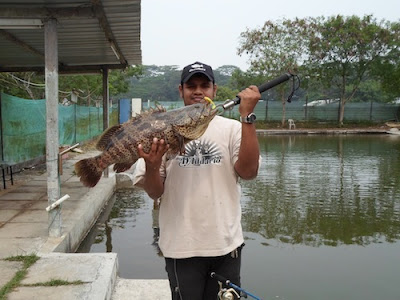 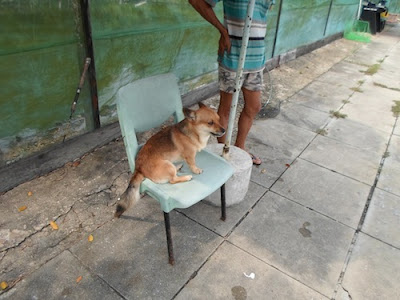 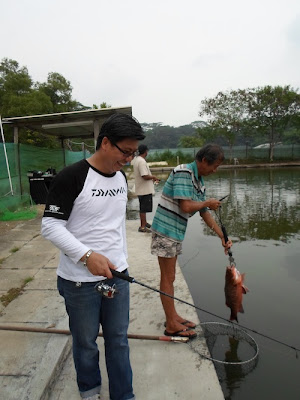 A barra to round off his day 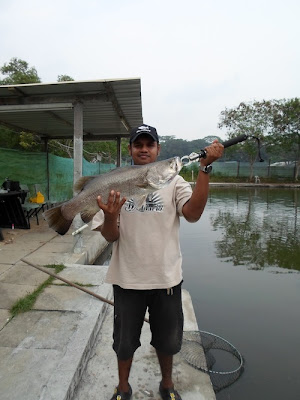 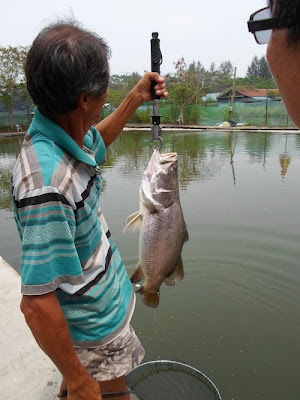 My only fish of the day 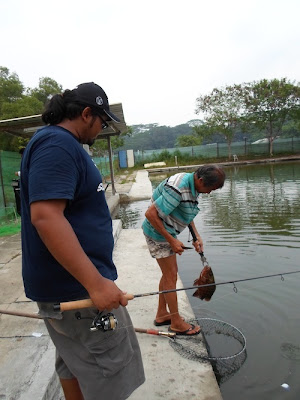 Sam with an 8lb Golden Snapper 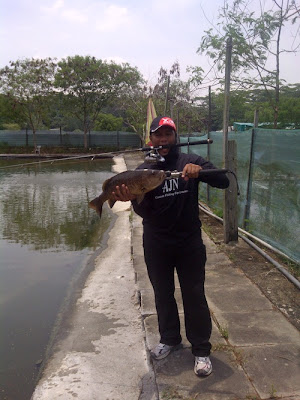 Sorry for the mediocre video, did the best i could.