September 30, 2012
Panjang's Main Pond was closed for cleaning for the past two weeks or so and today was the re-opening. Despite my invitation on Facebook, only a few familiar faces showed up. (some had kindly informed me of their unavailability in advance. Thanks!) The rest better don't tell me 'bo jio!' the next time.

When i woke up it was 6.20am. I had overslept. Took my shower, got changed and set off to the pond. From the previous re-opening when the new owners took over, i vividly remember how packed it was. Imagine my surprise when, reached the pond at 7am and i was the fourth person to arrive. Sara had just arrived, and was setting up near the right goal post area. I got my stuff and went over to join him. Set up our gears and i went off to get some bait. * DEAD BAIT (FISH,PRAWN,SQUID) is no longer allowed as bait in the pond*

Got a mixture of live prawns and milkfish and sat waiting for Sam to arrive. Our friends, Nick and Morgan from the GT Pond joined us for a little bit and in a few minutes, many anglers arrived. It was interesting to see the various rods, reels and rigs. Some had come with ultra light setups like An exori 4-8lb rod with a Daiwa ss700 reel and some had come with setups that raised your eyebrow like a 40lb boat road with a Shimano Stella reel. Soon every one was waiting for the fishing to start. It was 7.55am and Sam was nowhere to be found.

At 8am, we were given the go ahead. Lines were flying out in all directions. We casted our live prawns out and waited. The first person to get a fish on was my neighbor. As soon as his prawn hit the bottom he was on. He was having a tough time subduing his fish. ( i was joking with him that since his Penn Battle 4000 had a 7kg max drag that this ought to be a Grouper.) He came back with a 4kg Grouper. I felt a tug, Fish On!!! Landed a Golden Snapper. Re-baited and casted out. Fish On!!! Another Golden Snapper. (Morgan and Nick were helping out as all good buddies do. Thanks Guys!) Things had started to get chaotic and some of the non-regulars next to us were casting all over the place. Sara unfortunately, was a victim of this inconsiderate and selfish behaviour. He spent the first 20 minutes getting out of tangles without registering a hit. I decided to cast a little off the goal post to prevent getting tangles. Tug! Strike!!! Fish on? nope. Prawn came back without its head. Re-casted the left over prawn to the same spot. As soon as the prawn hit the water, Tug! Strike!!! and another miss. Prawn came back without the tail. I was pissed with myself for jumping the gun a little too early. I cast out the middle section of the prawn and again, as soon as the prawn hit the water, there was a tug. Strike!!! Fish On!!! This time i got him. Up came a nice big Pomfret!!! The thought never crossed my mind. As soon as i had landed the Pomfret, the spot was bombarded with lines. So Morgan casted my bait back to the goal post area as Nick and i were trying to get the fish in the basket. Strike!!! Fish on! Morgan passed me my rod and told me to land the fish. A 3rd Golden Snapper was landed. I glanced at my watch it was 9am. Still no sign of Sam.

William came over to hang out with us for a bit after Morgan left. We were having a blast making fun of Sara and everything else. Earlier, our new friend Troy had dropped by to say hi. But i guess he left while we were caught in the feeding frenzy. (Hi Troy, was nice meeting you!) The bite had slowed down a bit at our end. Nick had just left and the rest of us were sitting down and chatting when suddenly my rod bent violently. Fish on!!! Landed a Mangrove Jack!

It was 9.30am when, Sam and Francis arrived. They missed out the opening frenzy. But it was their lucky day. There was to be a fish release at 10am. Panjang paddled out and released the fish and pretty soon everyone was tangled up. I did not cast out as i did not want to spend time untangling my line. Sara was on!!! Landed a nice Mangrove Jack. After 5 minutes, most of the people were untangling their lines, so i casted out. But the line got caught in my finger, and a mis cast. Re-baited and again the same thing happened. WTF??? The same thing went on 5 times and i passed the rod over to William and took a seat next to William's friend who was greatly amused by my casting dilema. William had two misses before he left to pick up his family. The weather go hot, and the bite slowed down drastically. Most people had landed Pomfrets and Red/Golden Snappers. Only one Grouper had been landed by my neighbour.  Sam hooked on to a Red Snapper that had burst someone off. Sara and I decided to call it a day at 12pm, an hour earlier than the allotted time.  Sam and Francis stayed on and caught a couple more snappers. The catch was pretty average but the company was outstanding. So feel free to join us when you see us fishing next time. As William said today, 'We are Vulgar, but Nice!'

Next weekend i'll be in Rompin with Jith, Kenneth and my wife for some Sailfish action! Stay Tuned! 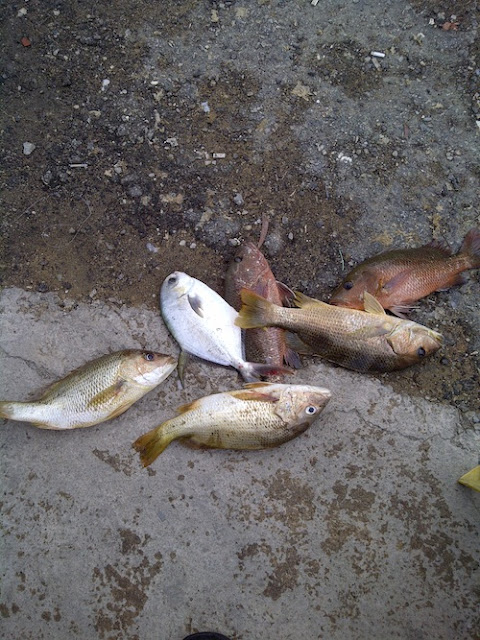 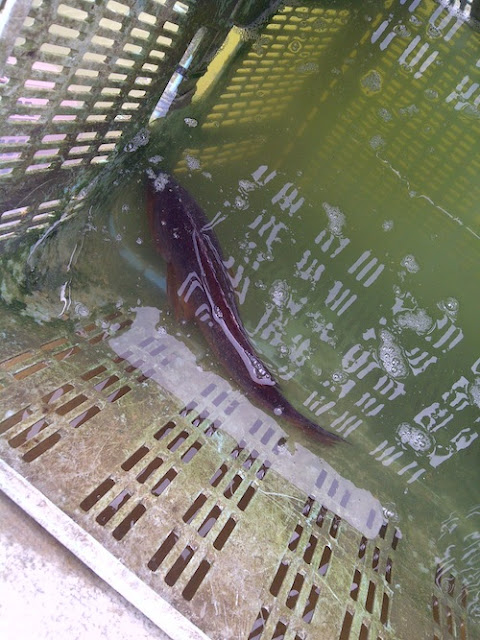