Jigging with the King of Queens

September 13, 2012
We had planned a day trip to Desaru on the eve of Kenneth's birthday. We set off at about 6am after breakfast and took a slow drive up to Desaru. Reached Desaru at about 7.45am and our boatman, Badol was still not at the meeting point. So Jith, Kenneth and i wondered around until he shows up on his SUV with the boat in tow. Seems that some low life had been stealing his fuel, when he left his boat at the beach.

We got our supplies and made our way to the beach. We loaded up our gear and supplies and got the boat into the water. It was my turn to get wet and push the boat out this time. 5 minutes later we were on our way to the first spot. Badol's last trip was 2 days earlier and they got some decent sized mackerels. So he told us to come prepare with our Pintails. The four of us got our pintails out and started fishing. 45 minutes in and all we saw was some juvenile Queenfish following our lures. Badol said that the mackerals were not there and we moved on to the second spot near the oil rig for some jigging instead. Kenneth, who is prone to sea-sickness, had bravely exclaimed earlier that he was going to try fish without taking the pill.

Badol and i were fishing on the right side of the boat while Jith and Kenneth were fishing on the left. Badol was telling me how they got a 20lb Queenfish on his last trip to the spot. Our 80g Surecatch Flasher jigs took no time to hit the bottom and the hard work began. Now, to those who haven't been jigging in Desaru, the jigging is done in a fast and furious pace, and it will absolutely wear you out. Mid-way through our conversation, Badol had a fish on. The fight was brief and up came the first Queenie. Jith's granny had requested for 4 queenfish to make salted fish and didn't want them too big, so the first one went into the box. Badol looked at me and snickered. He said, 'Three times in Desaru, and only you haven't landed a Queenie on a jig.' He barely ended his statement, when i was on! ZZZZzzzzzZZZZzzzz. 'your drag too loose la.' He said as i was trying to bring the fish up. Turns out that i had foul hooked the bugger, just behind the doral fin. Into the box he went. 2 down 2 more to go.

After getting heckled for the fluke by the rest. We went back to fishing. As Badol and i dropped our jigs down, he told me that there were bigger ones than the 1-2kg ones we had landed. My jig hit the bottom and the line went slack. I tightened my line and began jigging. BOOM!!!!!! I had a hit!!! ZZZzzzzzZZZZzzzzzz. The line kept peeling out and i thought i had another one foul hooked. But Badol told me it was a big one. I was slowly pumping the fish up, when a couple of big waves hit the boat. I was on my knees fighting this fish as i couldn't balance properly. By now all the other lines were up and 3 sets of eyes were watching. In fact at  one point all 4 of us were standing in line as the fish came up. 'Balance the Boat' Badol yelled to the other two. Finally, the fish came up. We were having some trouble landing the fish as the boat was rocking badly and the fish kept thrashing about. In the end Badol told us to Gaff the fish. But instead of gaffing the fish in the mouth, my dear friend Jith, Mis-cued and got him on the body. High fives all around and Badol said, 'Shiok right! Finally got on on jig!'  I smiled as i posed for a picture. My heart was still racing, i had gotten my biggest Queenie so far. It was between 4-5kg according to the boatman's boga. ( you decide for yourself when you see the pic, cos i dont think it's that big)

Kenneth in the mean time had hooked on to a big Queenfish as well. After puking 3 times, he steadied himself and tried to bring the fish in. Unfortunately, the fish got tangled in the anchor rope. I tried to pull it up with my hands, as Badol instructed but the 20lb main line gave way. Kenneth started puking again. A short while later, he was out for the count. Jith, who had not registered a bite, finally got a hit. But mid-way through the fight, the handle on his Aceration gave way. He tried his best to land his fish but, it dropped the hook eventually. Badol landed a big fat Selar on his 80g jig. By now, we had landed a fair bit of Queenfish. Aside from the 1st two small ones and the big one that got gaffed. We threw the rest back. As Jith, was trying fix his reel, Badol and i had lunch. Kenneth, woke up and used my rod ( too dizzy to re-tie his lines, he said) to jig for a bit. In a couple of minutes he was on! But the fish came up quite easily. Another Selar! He went back to sleep after that. And Jith, decided to have a go on my setup. A short while later, he asked if the RCS knob on my Ballistic was supposed to be loose. Badol said that he was gripping the knob too tight while he was jigging. Since there were no tools on board to tighten my RCS knob or fix Jith's Handle, we were down to our smaller reels.

After lunch, Badol and Jith were using sabiki's to haul in Selar by the dozen. Since my lighter setup couldn't handle a 80g or a 60g jig.  I switched to a 40g Ima Gune. I was getting plenty of hits, but i was unable to set the hook. Badol told me that it was probably juveniles. And as if on cue to prove Badol's point, Jith's sabiki rig was peeling out line. Up came 4 Selars and a 2lb Queenie! Queenie on a sabiki!! Must be Jith's lucky day. This Queenie went into the box and his granny's order was completed. Apart for a Big, Fat Selar, which was almost a kilo, i had no more bites on the jigs.

We went back to try for the mackerels. Nothing at all on the Pintails. Badol decided to use live bait instead. Jith was still using his sabiki to catch Selar ( We had almost 10kg of Selar ) and the occasional Queenfish. The Queenfish at this spot were a little too small so i sat and watched them fish, while munching on some Twisties. Badol was on the phone, when his rod twitched. When i showed him, he said it was the bait fish on the end of the line. Jith said that the bait fish was spooked by something. And he was right. Within a minute, the rod was bending. Badol told me to bring the fish in cos he was talking on the phone. I set the hook and the fight was on. After a minute, we saw a fish jump in the distance. Mackerel!!! We all exclaimed. As the fish got closer. Realized it was a big Garfish aka Todak, much to Badol's amusement. But this fish was a smart one. He was going round the boat. (He was hooked quite far away from the boat.) With a little teamwork from Jith, We got the fish in the boat. He was nasty looking. Badol told us to keep the fish as it was good eating. ( i have no clue, i just told Jith that i wanted the skull.) A short while later we  were on our way back. Getting drenched by Badol's crazy driving! I have given him a new nick name. I call him the King of Queens (cos he told me he caught a 20kg Queenfish, which he just laughs off or tries to be gay by grabbing my ass) We ended earlier than usual, but we'll get them mackerels the next time.


Biggest of the Day. 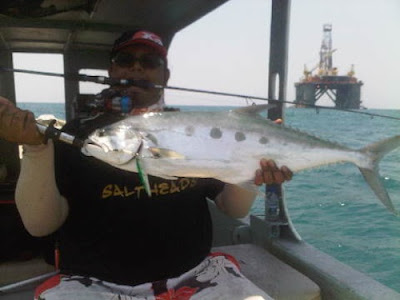 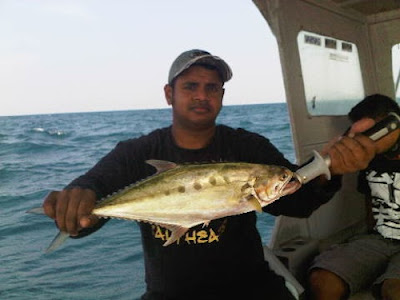 Kept trying to bite me! 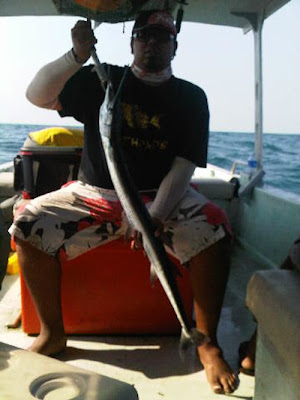 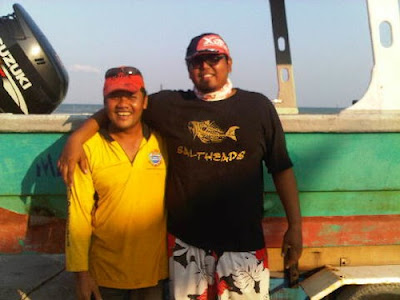 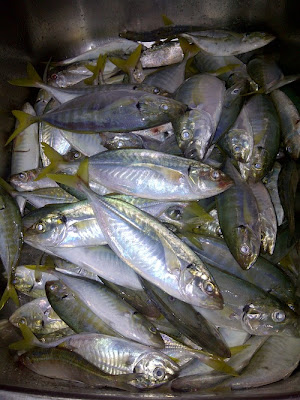 Jith's granny was happy with the extras in the order 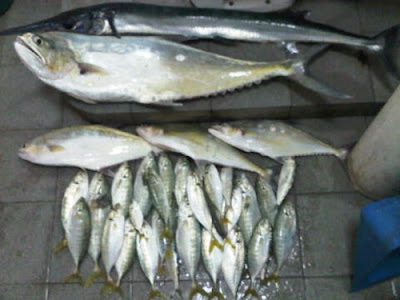