August 27, 2012
Finally, it was time for the AJN Competition. We arrived early at Dave's Pond to set up our gear and prepare our bait. We had entered two teams. Team 1(Gold Logo) consisted of the founding members, Kenneth, Jith and myself. Team 2(White Logo) consisted of Sara, Lala and his brother Sam. After a short briefing, we all took our positions. We were camped on the opposite bank near the pump, except for Sam, who was hunting for the Grouper, near the coconut tree. Our strategy was simple, catch as many fish as we can, and if a big one comes along it is a bonus. 9am came, and we got the signal to cast off from Anthony (organizer of the AJN Competition). The lack of pictures from us, will give you a brief idea of how busy we were!

I tossed in a handful of tambans to berley the water and we tossed in our baited hooks. Hook up was instantaneous! I hooked on to a GT, i knew that landing him on the AJN would take some time, so i had set a high drag setting on my Shimano Sustain FG 2500 reel. Once Lemuel unhooked the fish, i found out i was the first to land a GT and that there was a prize for that! Whoppee what a good start. As i was walking back, Morgan told me Sam had landed the first grouper ( not a very big one ). Two outta the gates! We were told that the heaviest catch stood at 10.5lbs. Some one next to me then landed a 9.5lbs fish. My 3rd fish was a Barramundi which was 9.5lbs. That left me tied for 2nd. Not for long though. The bigger fishes seemed to prefer the area infront of the platform. An 11 pounder was landed taking the lead. All of us were landing fish and 30 minutes into the competition, Dave shouted out. Angler number 14, (Jith) still had not landed any fish! We looked at him in disbelief. Kenneth was already onto his 7th fish and most of hand landed at least 3. Jith was not setting the circle hook properly! Suddenly i saw a familiar face walking towards us. Our friend William, had come to show his support! He stayed with us for a fair bit, egging us on. He was encouraging Jith and Lala as the both of them were not having a good catch rate. We really appreciate your support and company Bro. :)

Mid way through the competition, it was announced that Kenneth was leading the way with the most catches. This spurred Jith and me on. Our target was to win the Group Category, and Kenneth's red hot streak was sending us in the right direction. Meanwhile, Lala was putting on quite a show for us with his running up and down and discovering that the fish was a small one.

30 minutes left and the heaviest catches stood at 13lbs, 11lbs and there were a few 10 pounders landed. The heaviest caught by our group was my 9.5lb Barramundi. The bigger fish were being landed closer to the platform. In a last ditch effort, we threw our remaining berley into the water with hopes of attracting the bigger ones. Unfortunately for us only the little ones came to visit. 3! 2! 1! The competition was over! Prizes were given out to the winners and pictures were taken.

Team 1 had won the group category, thanks to Kenneth's streak. Dave told us that another competitor and Kenneth were neck and neck, before Kenneth pulled away! I had landed the 1st GT and Sam the 1st Grouper. We were informed that this competition was the 1st one of a series of competition and all catches were awarded points based on the size of the catch. i was in 8th (highest ranked salthead) with 2 points for my 9.5lb Barramundi! Here are some pictures from the competition which i got of Anthony's album.
Our choice of location

waiting for the fish 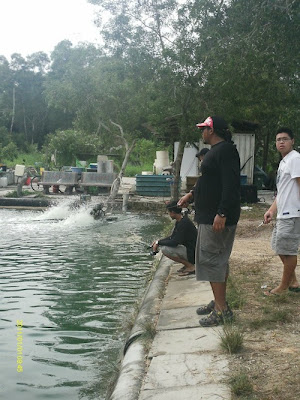 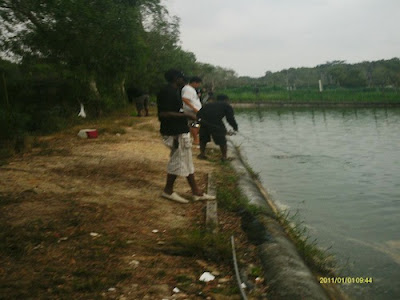 Kenneth's fish being landed while mine was being stubborn 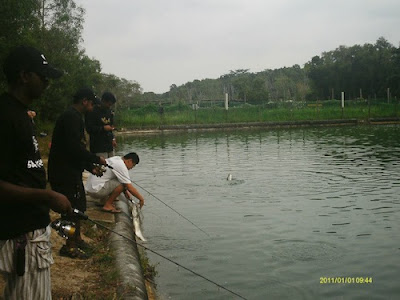 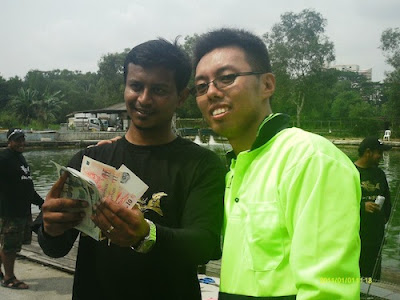 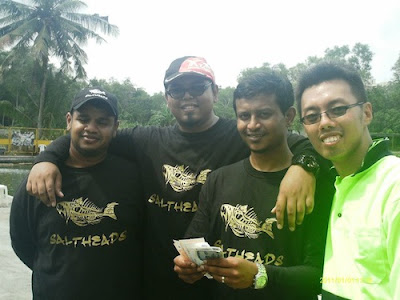 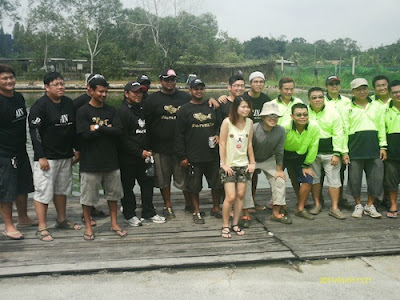 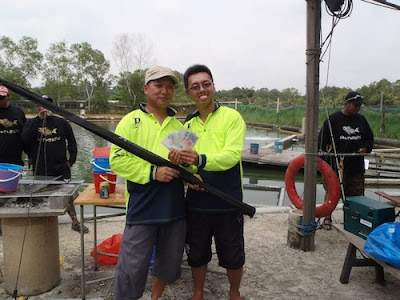 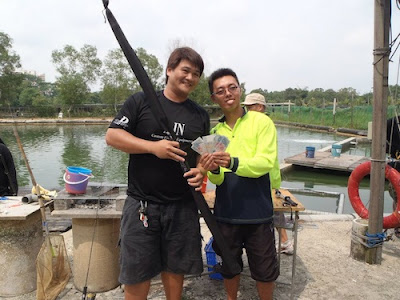 The Winner! from Team AJN 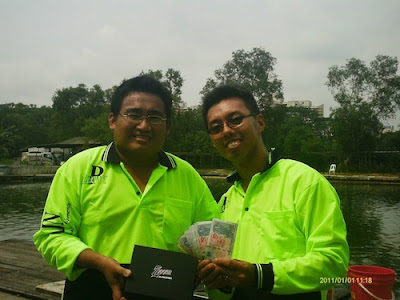 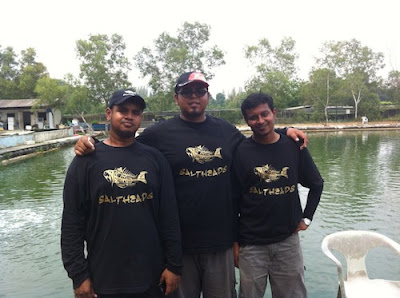 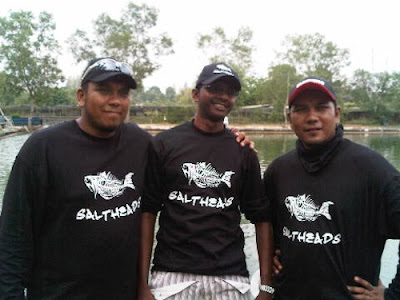 Sam and Me with the sub awards! 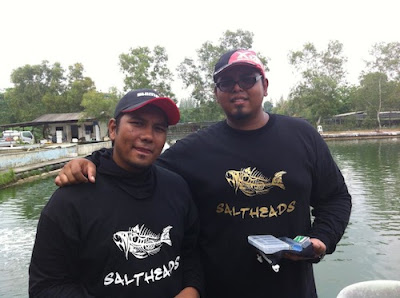 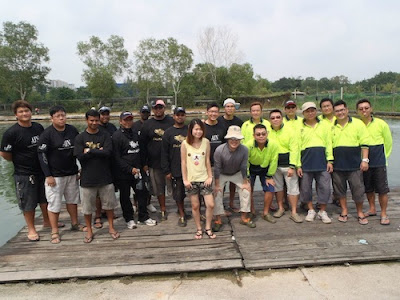 So after the AJN competition, we headed down to Panjang's Pro Pond for some beer and more fishing!
Our friend, Leonard and his friend Terrence joined us, as did Sam's friend Francis and some of Shankar's friends. While waiting for everyone to arrive, Nick got the ball rolling with a nice Red Snapper, much to the amusement of his two colleagues Morgan and Lemuel. Everyone was waiting for Panjang to release some fish and he did at 1pm. Francis landed the first fish after a brief fight. It was a Golden Snapper. Pretty soon all the floats started going under. Rods were bending and reels were screaming ( well, briefly at least due to the size of the fish.) Golden Snappers everywhere. There were plenty of lines cut off due to the insufficient length of the leader.

The guys at the back of the pond had not gotten a bite yet and were patiently watching the action infront of them. Once it quieten down at the front, Shankar and his friends were getting all the action. They got Golden Snappers too. Where were the Red Snappers i saw when Panjang was releasing the fish? The hunt for the Red Snappers was on. It was Leonard who eventually found them. Three in a row from the same spot for him. Morgan tried to get in on the action but was not successful.

Panjang casually walked by and mentioned that there were 6 groupers released into the pond. This got Sam, all excited. He was using a BIG FAT TILAPIA as bait for the grouper. And oh, did i mention that Kenneth's red hot form carried on into the second session? After a couple of snappers, he hit the jackpot. He hooked on to a Grouper and landed it to cheers among the group. Sara and Sam immediately hit the same spot. Sara was on first and got burst of at the pipe next to him. Sam was next, but the fish was too strong and cut of his 30lb leader on the ledge much to his disappointment. While Sam was still in a state of disbelief, Sara, quietly went back to the spot. After some time, he had a hook up and after a brief struggle the Grouper cut him off at the pipe again! Serves him right for not using a longer leader as the rest, Jith said. Hahahahaha. My wife who was fishing in my place, landed 2 Golden Snappers. She is learning fast, and asking for her own set up. (oh oh!)

It was almost 3.30pm and the rain that had been expected never came. Instead, the sun was scorching hot. I had a long day so i decided to end a little earlier. So i did not manage to get a picture of the combined catch. But i was informed by the rest that we had hit about 32-33 fish. Excellent session with our friends and a perfect way to end the day.

Lining up for fish release 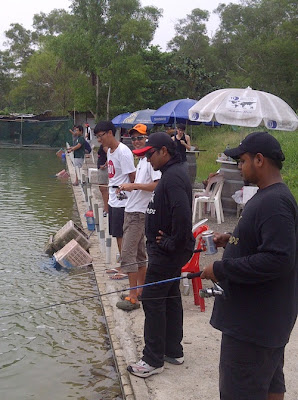 Nick working on his off day 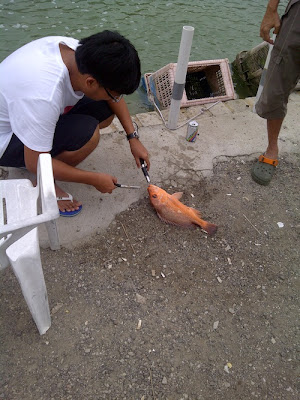 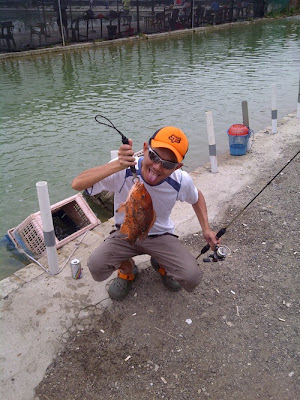 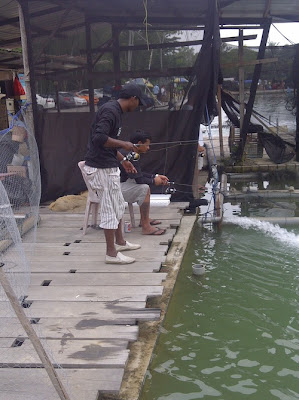 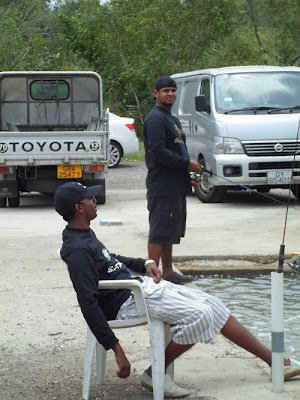 Waiting patiently for a bite 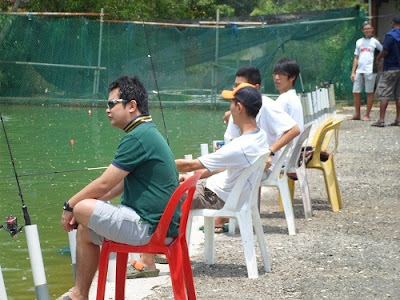 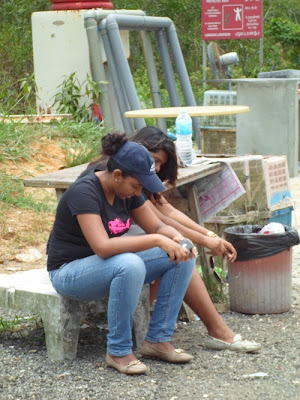 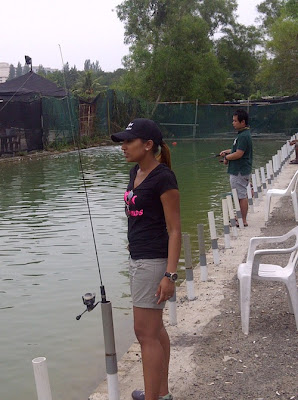 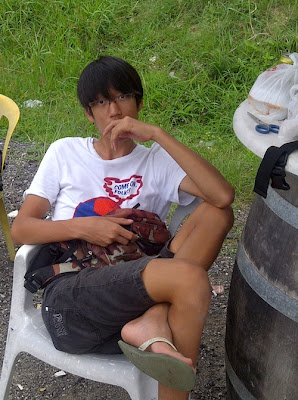 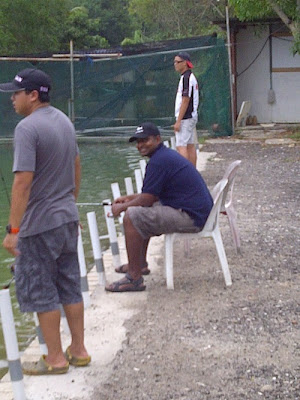 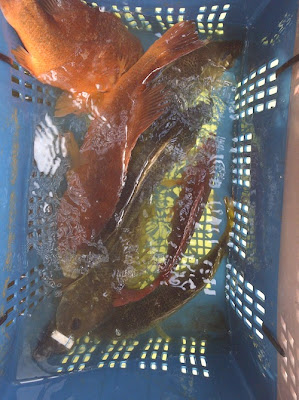 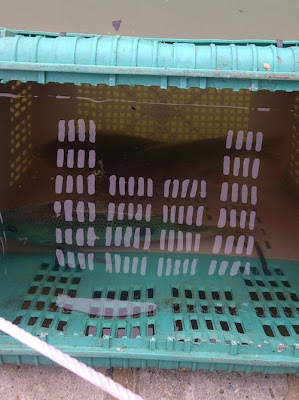 One of our baskets. Kenneth's 4kg Grouper 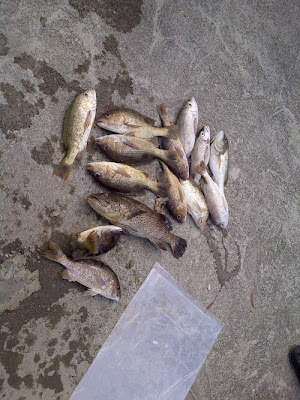 Next up, We are going to Desaru. Stay tuned!