Got my live prawn bait and reached Main Pond at 10am today. Didn't sleep last night thinking of last Saturday's dismal catch rate with only two red drums in seven hours(2pm-7pm) and losing a 4kg+ barramundi, a MJ , red drum & a few Gold snappers(in short it sucked). Been gunning the two prominent grouper spots with no avail, only to see another angler hooking one in front of the goal post!


Back to today's story:
So after reaching at 10am, Panjang the pond attendant told me he was going to release the fish in 5min and I have not set up my gear! Damn! Talk about a bad start for the day! Ah well, I was planning to stalk my nemesis: the grouper. After set up, Panjang told me the released fish have swam to the back of the "goal post" and told me to go over. 2 anglers have just manage 2 hook ups of golden snappers before I reached the platform and I quickly casted under the ledge where the snappers have taken shelter.

Within 3 min, boom! Set! Strike! Landed a 1kg AZ(Golden snapper). I rushed to unhook my catch into the basket. Before I could release the hook the AZ decided to give a fight on land. Armed with the hook in its mouth, the AZ's hook scraped the top of my thumb. Blood was all over. Not the fish's but mine. "F*ck the bleeding, I gotta keep the feeding frenzy going!," I thought. So I manned up, kept the fish and sprinted over to my bait basket to bait the hook for the next one.

Another 3 anglers joined in and stood beside me(felt like a mrt train crowding all of a sudden lol). After 5min from casting, I watched my float twitch. Hmmm... Bait got spooked. Closed my bail arm and dragged it back to position. Suddenly, the float sank in.... IN SLOW MO... Counted two seconds and Strike! The angler beside me didn't flinch or move to give way and I had to tug the fish out from under the ledge!

Bro don't mind! I said. He moved one step away... Wtf... I immediately told him, " bro I need to yank this sucker out so I need more space!" "ok ok paiseh" he replied and move over to my right. During this time, I had no idea what size this AZ from the fish release will be. My rod bent violently while I fought the fish at the end. I didn't have enough of leverage and I didn't want to lose this fish that rushed under the ledge. Before I knew it, the clear water of the pond became murky due to the commotion created by the fish on the end. GAO HE! GAO HE! The angler beside me yelled. I opened my bail arm and ran to the other end of the platform gain leverage. Close the bail arm and pulled.... A burst of commando striped speckles emerges from the unsettled murky water. It was a Grouper! It tried to swim back to its hideout but I i tugged at the rod and gave it no way to return to its comfort zone.Line Tension tight, Rod Bent & heart racing... "don't lose this catch Sam" I thought and Yes! I managed to tire it and bring the fish near shore(saw the fish head). Before I knew it, the silliest thing happened,a "helpful angler" held the line to try and hold it still. The Grouper jostled. @#*@#% ! I suddenly felt light and saw a blank hook hooked onto my "Samaritans" palm with the sour look on his face. "paiseh ah bro, at least we are even now, I lost the fish and u got my hand" WTFFFFFFFFFF, I thought. The sane part of me immediately replied," I guess it wasn't meant to be."


My head was racing.... !@#$%$#@!..... My mood just went bad... I smsed Isaiah and my wife on the incident and they shared my woes. Not to mention, Panjang was sympathetic too and said:" why u no plier? Grouper cannot pull(he meant using bare hands to tug the fish out), haizzz"In my defence, I told him that I wasn't the smart Alec and he gave me the sympathetic smile. All was not lost, as I started to relentlessly land one fish after another(must be the surging anger and disappointment in me that reflected in the catch lol) as follows:

Wait, did I say final? Erm well, I decided to extend another hour from 3pm-4pm. Why? Isn't it obvious? I can't get the loss of the grouper out of my bloody head lol! So i armed myself with a good size tilapia and baited the line and cast out. Bait was too active so I reeled in to knock the fish out. Recast. Under ledge. I'm at the corner that is near the ex-barra pond this time(didn't wanna go for the spooked grouper corner as I kept having bad replays in my head on the accident)
Reeled in slow under the ledge and then I noticed, damn, I didn't put my damn float! So I reeled in. Stuck! Under the ledge! What more could go wrong right? I looked at my iPhone. 3.45pm.... Sigh 15min to go... Slack my line and jiggle the line in a up down motion to free it. Finally, got it out of the ledge. Suddenly, there was a huge dramatic pull at my line. Wtf? Has The tilapia came to its senses and decided to do a payback? No, the rod was incredibly bent and my reel was screaming! Fish on!!! As I fought the mystery fish at the end, I was thinking,"which fish will take a palm size tilapia?!? Taiwan?"
I fought and pull. Slack the line, run to other side, tight, pull. The fish darted from under one ledge to another under Ledge and the familiar murky creation in the water became visible just like this morning.

Painstakingly I fought the good fight... Reel pumping and tension building line on the thoroughly bent trusty salty chief rod. Will I make it??

Panjang jumped and frantically search for his pliers. 2min past and the grouper surfaced for 2nd time. I looked around, no samaritans, check, grouper on line, check, panjang running to my aid with a net because he couldn't find the pliers, check. As he ran towards me I notice the hook has barely hooked the left soft corner of the mouth!!!!! Panjang's sprint to help became an eternity...

Ladies & Gentlemen, the Eagle has Landed... My very first grouper landed and yes it's at No.2FW1 Panjang Pond. It was a good day and made a new friend there too lol. 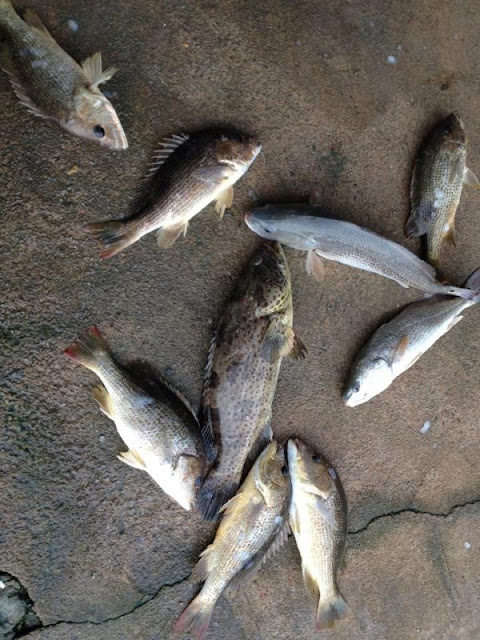 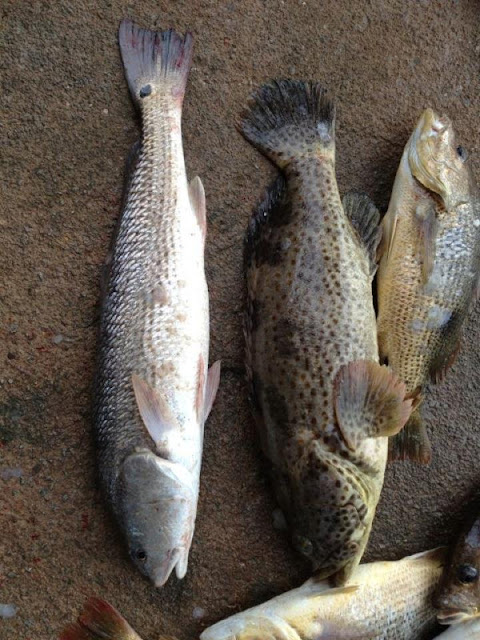