July 23, 2012
I had to take my cousins who were visiting from Switzerland, fishing @ Dave's on Saturday. I have not gotten the pictures yet, so i guess that CR is going to be delayed. In the mean time our resident grouper hunter, Sam, had a pretty decent session at Panjang's Pond. His CR is as follows. Enjoy! :)


It has somewhat became an annoying ritual for me recently that I don't tend to sleep before a planned fishing trip on the following day(wife is definitely annoyed). Well I guess my mind tends to flash images of the following day for my imagination on what fish I might be catching, types of bait, type of rigs, gear and so on. Somehow, this has kept me from sleep the day before and I wonder if it happens to any other anglers too lol.
Anyway, the day started with me buying bait as usual and heading down to the pond. Isaiah had plans and I compelled myself to do a solo mission again. Objective for the trip: To ascertain that Thursday's Trip wasn't a fluke. Well if you see it from my point of view, it's all about learning new experiences, making friend and meeting old ones, challenges and recognition(not much of the latter). Compare a weekday of pond filled with only a few amateur anglers versus a weekend of pond filled with both pros and amateurs and you can see visibly what are your chances of the points I've mentioned. :)
Anyway back to the story:

Upon reaching the pond I saw that the pond was already filling with the usual suspects of old timers and a few unfamiliar faces(1st timers) & a few others like me. Total about 10+ anglers including me and more were coming in. Upon reaching Panjang's shack, he gave me the most ridiculous and sheepish grin & said," Aim gaohe(grouper) ah? " and I replied with a grin. Whatever happened to "good morning" or "How are you"? lol. Ah well, thats Panjang the pond attendant for you. He immediately filled me in on the status of the pond condition and where all the fishes maybe hiding for the day(good customer service). He then hurried me to set up my gear before I paid for the session.

Set up my rod, Baited up and went to the corner nearest the ex-barra pond. There I met 3 old timers who greeted me with nods and before I could cast my bait, "Wah! Aim GaoHe ar? Prawn so big. Buy market one ar?"

After an exchange of bait information and he started by telling me that a grouper was already caught earlier by another old timer before I reached at about 8am & he had 2 huge takes on his tilapia baits without succession of landing any fish. Hmmm... The Groupers must be spooked by this chap at this corner already and with my past experience fishing groupers, they won't be biting here I thought. After spending about half an hour at the corner I decided to "butterfly" around the pond to scan for useful info or fish sightings. From what I gathered, there was fish release total of 100kg on Friday . There was a 10kg Barramundi, 18 groupers, 10+ Taiwan Ngor(red drum), and the rest are 1 foot Ang Kuay(red snapper), Ang Cho(spotted snappers)

By 10am and still no fish bites from my casts and it was fish release time so I scooted over to the goal post where the fish were released. Before I knew it, the whole area started buzzing with reel cast to the dsesired location. 10 min past and there were no takes so I change my location to the back pond ledges where the fishes maybe hiding. By then, the back area were already swarming with old timers and I managed to squeeze In the frenzy to cast(this is one of the weekend challenges an angler might face).

There was a moment of silence... Zzzzzzzzzzzz.... There were screaming reels all over the place suddenly & Not on mine though. I looked on as one by one, golden snappers, red snappers and barramundis were landed by these old timers. Suddenly I felt a slight tug on my line followed by a bang. Tightened my line and counted 2 secs and strike. Fish on! Ang cho and the fight went on for less than a min before I landed it. I quickly unhook the fish and got it in a fish basket, rebaited and went back to the same location to keep the frenzy going. Casted out and reeled in slow. Same situation: light tighten, strike and land. It was number 2 for me. All of a sudden, the pond went quiet again. The frenzy was over. Some of the old timers have already caught 4-6 fishes and I knew I was doing something different that made my catch rate so dismal. There will be a better next time I hoped.

The day continued with no catches and the scorching sun giving me an epic headache. Switching from corner to corner, ledge to ledge, I still couldn't get any takes. While fishing at the corners watched as unsatisfied anglers going back as they were being done in by the sweltering sun and incredibly slow catch rate.To make things worse, I lost 2 leaders due to snags and accidentally dropped and scratched my reel badly on concrete. Finally, I decided to throw in the towel too and go back home with my dismal catch. As I walked over to Panjang's shack and he encouraged me to continue(it was 1pm then) with my last hour saying that I MUST land a grouper before leaving. He baited my hook for me coax me to the corner where I landed my last grouper two days ago. "Sam, stop being a wuss and go catch a fish", I thought.

So I dragged myself over to the corner crowded with the pros and old timers. I counted, 1,2,3,4,5,6... Damn... Oh well, what the heck. Casted at the ledge horizontal to me and waited for almost half an hour. A friend I made two days ago, dropped by the pond to say hi and ask about my catch.

"today f#%*tup lah bro...so far two only man. Look at my competition!"( I pointed at all the army of floats crowding around the grouper spot). I shared him the whole duration incidents and the catches made by other anglers and grouper misses by them. He asked me what bait I was the pros were using and I replied they were all using kembong strips, milkfish and live prawns. I then reeled in to show him my combo bait and with no avail. He smiled and said," come this monday lah, lesser people," and I just replied with a smile. I threw the line in the ledge vertical to me and reeled in under the ledge while chatting with him.

Suddenly, I felt a huge lunge at the end of my line. Fish on? Line tightened, timed myself and strike....FISH ON! Before I knew it, the familiar commando stripes I made friends with in my last trip came out to greet me. "Ay Gao He le! ", one of the old timers yelled. The grouper pulled its way back to under the ledge with rod bending. I walked backwards with the rod and tightened line to pull him out but he wouldn't bug so I slacked the line immediately and walked further back and close the bail arm to continue the tension and pull to prevent a line fray or burst at the ledges. The mud at the area started to erupt and yes the grouper came out! But it wasn't over as he wanted to swim back under and I quickly pulled my rod high. The grouper finally surfaced.

Nice Lip Shot to its right corner! This time round, I needn't worry about smart alecs as I was surrounded by old timers and pros lol. Pliers to the lower fin, the grouper was practically lunged out of the water. Oh my Goodness! This seals it. It was my no.2 and on a weekend this time round!

Ladies & Gentlemen, The Eagle Has Landed for the Second Time LOL

I looked at the time, 2pm and JUST IN TIME. I thanked everyone around me who helped and brought the prize over to the shack. Immediately Panjang asked me sternly,"Extend 2 hour?" I grinned and politely turned him down and I caught a glimpse of him sniggering to himself. Panjang really made my day, not to forget the grouper and the company I was fishing with. :) 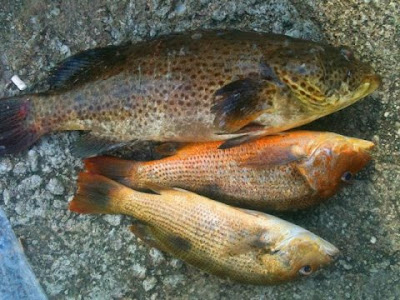