July 25, 2012
Ok Pics are finally here. My cousins who live in Switzerland came to visit. So when my elder cousin told me that the boys wanted to go fishing, i decided to take them to Dave's. Met up with Jith, picked them up and went to the pond. We ran into Samuel, who had just finished his session at Panjang's Pond. He is now our resident grouper hunter. :) Kenneth arrived a short while later. We set up our gear and were ready to go. Jith and Kenneth were off doing their own thing, while Sam and i played 'Coach' to the boys.

First up was an enthusiastic Michael. Gave him an introduction to the rod and reel and showed him how it worked. Showed him how to cast as his brother looked on. And so it began. First cast, it wasn't too far out. Couple of minutes passed by and Fish On! The ever obliging Barramundi put up quite a show for Michael. He was really excited and kept reeling even when the fish was running! Told him to calm down and explained to him when to reel and to maintain tension when the fish was running. In a few minutes the fish was landed. Picture Time! He actually asked why the fish were slimy! 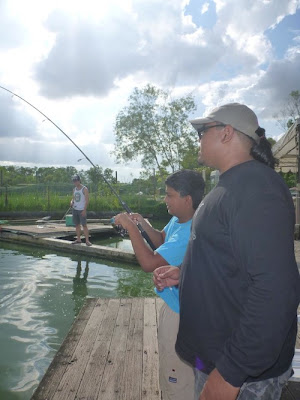 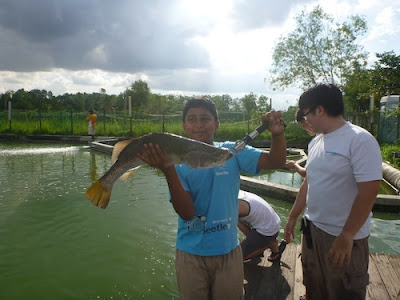 Jacob's turn. He told me he was left handed, and seemed a little nervous. Casted out and waited. Nothing. Re-casted and waited. Thud!!! Fish swam off with the bait. I took the rod from him and casted to the Barramudi's house. Sure enough, someone was home. Fish on!!! Jacob landed a good sized Barramundi. 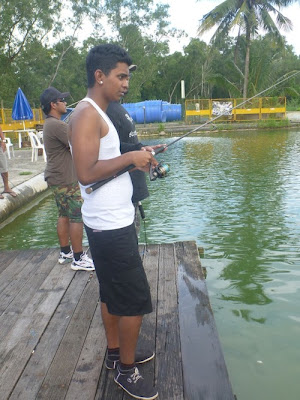 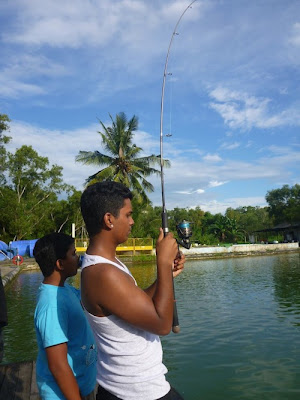 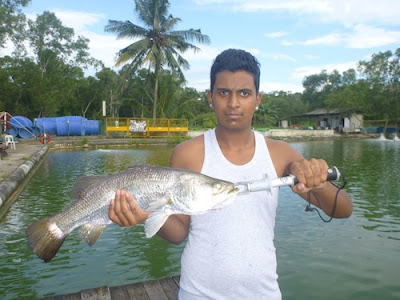 The boys took turns after that, with Sam and myself guiding them as and when we saw the need to. They were doing quite well. Michael was on a roll. GT, Snapper, Grouper. Was fun seeing the little guy as he battled with the fish. Jacob, was entertained by the Barramundis. He landed a Snapper later on but i guess he pitied the fish and let it go without a picture. 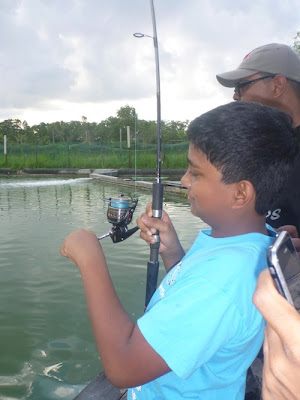 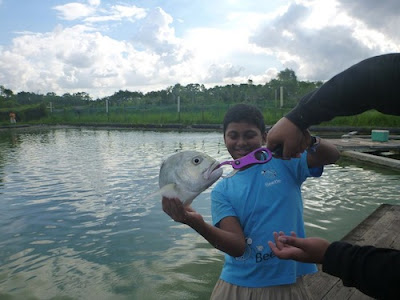 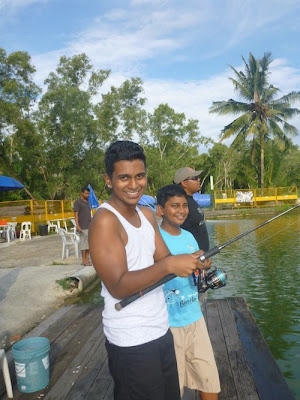 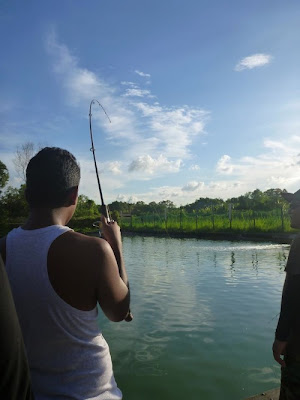 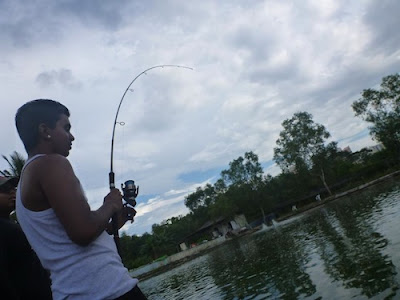 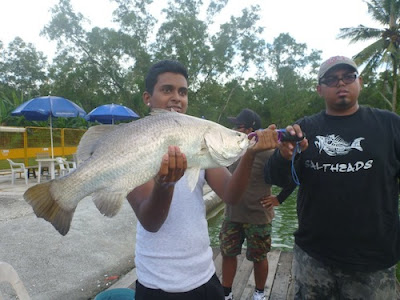 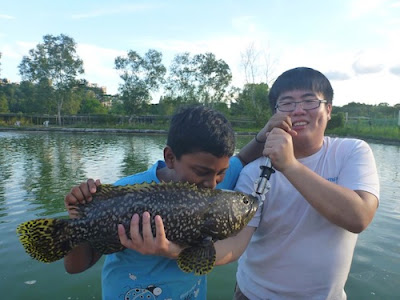 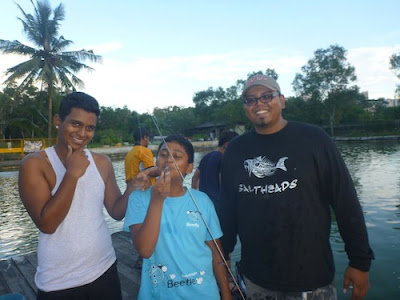 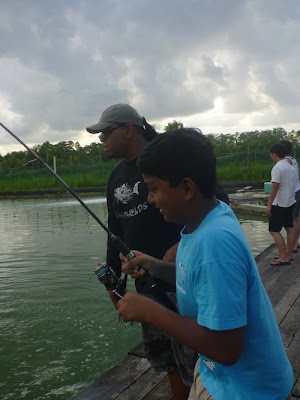 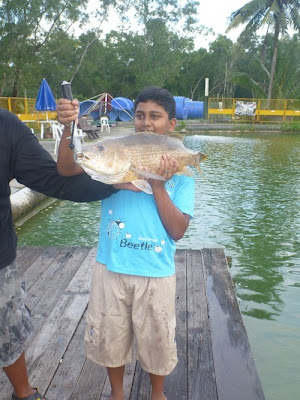 Then, out of the blue, Kenneth who was fishing at the edge of the platform for groupers suddenly went. 'Eh, who loosened my drag?!?' His fish was peeling away from the platform to the opposite bank. Curious, i asked him, 'Bro, what fish?' He pointed out to some fins and went, 'Red Kim.' RED KIM???
I looked at where he was pointing and saw the red tail and fin he was pointing to, while attempting to keep the fish under control. Before i could say anything, the fish disappeared and the line went slack. He was about to curse, when he realized the fish was swimming towards him. It was heading under the platform! Took him a bit of squatting, rod dipping and pumping to get the fish out. Then we saw it. A huge Mangrove Jack!!! Everyone was excited as the fish had not been seen in awhile. The fish was angry, refusing to be lip gripped. It kept snapping it's jaws. Morgan, bravely held it by the gill plate and slowly got the lip grip in. Unhooked the fish and it was photo time. After that it was all ' Red Kim' jokes until we left. 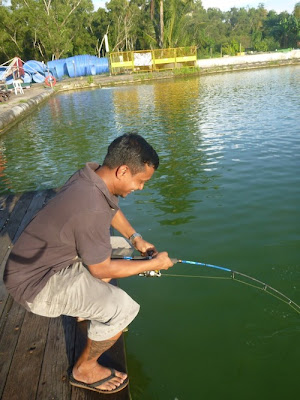 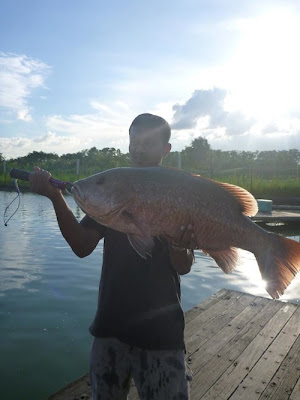 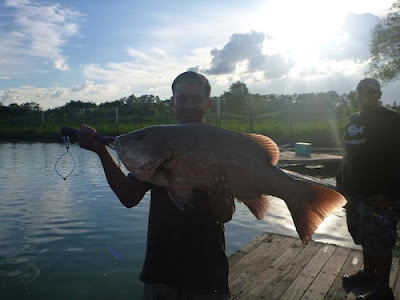 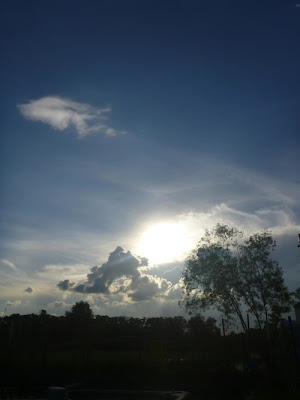 On a separate note, those that have been asking about what happened to the competition, fret not. We had to re-schedule it due to some logistics issues. The format has been changed to make it more exciting. Here are the details. Come and Join us if you can. It's going to be fun

Highest score based on the points system below

Rules:
*Single hook rigs debarbed (Circle hooks only)
*Single hook lures
*Live bait (to be purchased from the pond)
*A point will be deducted for every fish that is gut hooked
*Organizers decision will be final