Received an sms yesterday from William, asking if I wanted to fish @ Dave’s at 3pm this afternoon. Since I was already going to be at Panjang’s Pond till 2pm, I agreed. Giving me a chance to test my new lure and baitrunner reel I recently acquired from my friend Carl.

Wrapped up at Panjang’s Pond, (the catch was average, but it was pretty crowded) and went across to Dave’s, when Nick smsed me that he was there. Rubbing my hands in glee at the empty pond, I casted out my lure and began my  retrieve. Knock. Knock. No take. 2nd Cast. Knock. Knock. No take. 3rd cast. Sped up the retrieve. BOOM!!!!! Fish On!!! Nice healthy Barra in the 3-4kg range. Got him near and asked Lala to take a picture for me with the fish in the water. He fumbled, then mumbled and the fish spat the lure and went bye bye. Then he explained that his phone screen was spoilt and he wanted to borrow another camera. By this time William and his kaki had arrived and were setting up their gear. 4th cast. Retrieved at the speed. Knock. BOOM!!!! Fish On!!! Another Barra, this one was a little bit smaller, but we managed to land him and take his picture before letting him go. There were a few other anglers starting to fish at the hot spot so I decided to keep the lure,(I did try it at other parts of the pond as did Lala, but only knocks, no takes.) and try the baitrunner.

Hooked up a nice Tilapia and cast out, less than 30 seconds and the baitrunner was telling me fish on. In my initial excitement, I forgot to rotate the handle to disable the baitrunner function and went to strike the fish. Heard a super sonic sound. Major Blooper. But fish was On!!!! Landed another Barra. Cast out again and Fish On!!! This time I let the fish run,  counted to 10 and then Strike!!! Fish On!!! Landed another Barra. By this time Sara had arrived. With Lala and Jith serving as Deckies, we decided to play a little game to test out our upcoming competition format. Which is basically a scoring system based on the fish species you land. ( a refreshing alternative to the heaviest catch.) So the scoring went like this.

So it was on. Sam, Sara, William and Myself cast off. As if on cue, the fish stopped their frenzy. Soon it was fish on for Sara and Me. 2 Seabass Landed and a point each. Sam was next with a Barra. Then it was me and William with 2 Barras each. I was up next. The baitrunner was screaming. Only meant one thing. GT!!! Took awhile with the small reel and a moderate drag, but landed him. In the mean time Sara and Sam were on the board with some Seabass too.

Then things got interesting. William got himself a Red drum, which sent him joint top with me with 6 points apiece. He tore away from the pack with a Snapper minutes later.  9 points for William.  A couple of minutes later I managed to tie it with him at 10 all. Sara, who landed a GT and Mangrove Jack was in 3rd with 9 points. Poor Sam, who had taken on Jith, as his advisor was still at 6 points. Both Sam and William were now aiming for Groupers. Unfortunately for them, it was William’s little girl who got the Grouper. With a little help from mummy and some coaching for Sherwin, she landed the fish that we were so desperately looking for. Jith in the mean time, was entertaining us by catching big milkfish with bread with a line tied to his finger. (almost a kilo in size) Time was running out with William and me tied at 12 and Sara just behind with 11 points. Last cast we said. We were all at the platform, except for Sam who was on the concrete area where they keep the tilapias.  Only William was observant enough to notice Sam cast over us. As he retrieved his line I got a hit! ZZZZzzzzzzz went the baitrunner. But, Sam’s line pulled my line away and the fish came off. SABOTAGE!!!!!! William, then hooked himself a Seabass for the Win. So it ended William 13pts, Isaiah 12pts, Sara 10pts and Sam 6pts. It was an extremely enjoyable fishing session, with lots of hook ups, misses, taunting and laughter. (and swearing of course.) Looking forward to the competition with the rest. It should be fun with the points system, where you can employ different strategies and see if you can out score the others. You can PM/Email/Text me for details.

I don’t have much pictures of today’s session as we were busy fishing and competing. Poor Nick was pretty busy as it was CROWDED with anglers, Lala and Sherwin had to help him out! 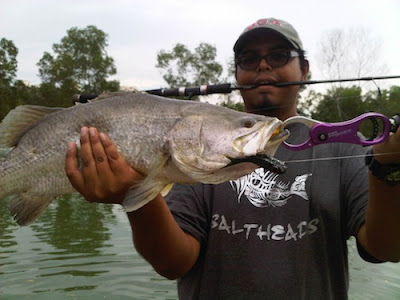 My biggest fish today on the baitrunner. (longest fight was a GT) That's William in the background! 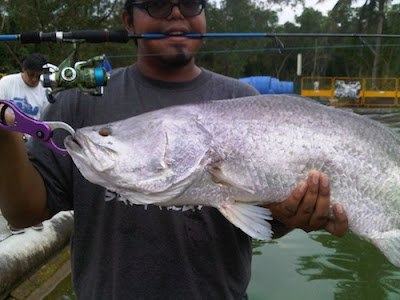 Here are the Pictures of the Baitrunner Reel. 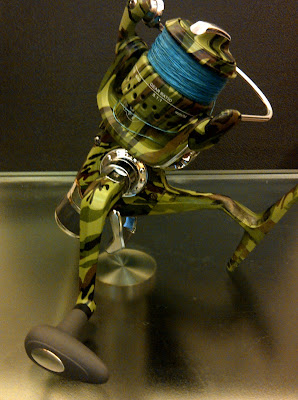 This one has been modded by my friend Carl 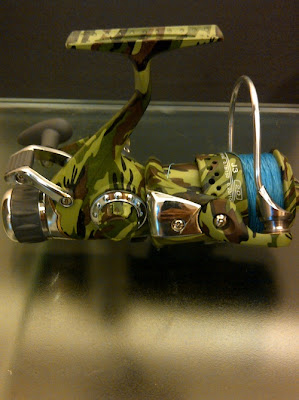 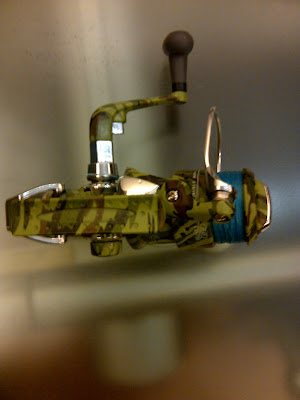 They are available through my friend, Carl. Pm/Sms me if you are interested in the reel. He has landed a Huge Red Tail Cats and other fishes in Thailand with this reel. It’s definitely something to try out. I like mine so much, I’m taking it to Desaru next weekend.

Carl with one of his RTC landed with the baitrunner 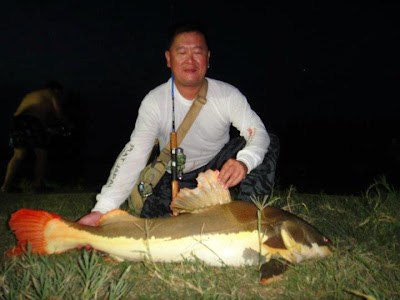