July 10, 2012
We had originally planned a 2 day trip to Desaru for his birthday weekend, but as the date drew closer, the weather was getting worse each day. Boatman told us to hope for the best. Got to Desaru and took the boat out. Waves were too high to get to the oil rig so we went to TU lighthouse instead. Not much of a difference. The sea was extremely choppy, (i nearly fell out of the boat when a wave hit us. Thanks for the save Lala!) and the weather was turning bad. We decided to head back. Paid the boatman, and came back home safely.


My only picture from Desaru. Note my new BFF beside me eyeing some left overs. 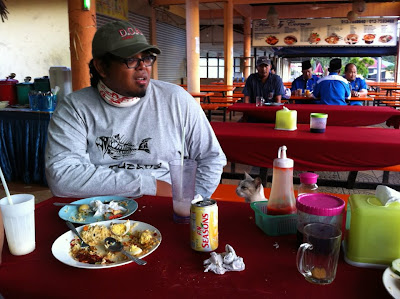 The birthday boy still wanted to do some fishing. So after a brief shopping trip to Sincere Tackle, we went over to Dave's Pond. I have been using rubber lures there for a few weeks now, and after watching Morgan hitting GTs on a spoon last week, i was tempted to give it a try so i bought a couple of spoons, along with some hard bodied lures and swimbaits. Jith got himself some lures too. Although i think he only got them cos they looked nice. :P


Jith's present to himself. Yozuri Crystal Minnow and Duel Hardcore 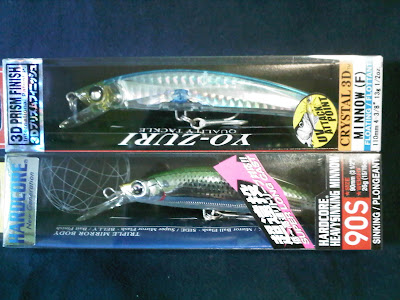 I bought the following from Sincere Tackle, Duel Hardcore, Asari Pinktail and GT-Bio Spoons. I got the Jackson Pintail Tune from Changi Pro. 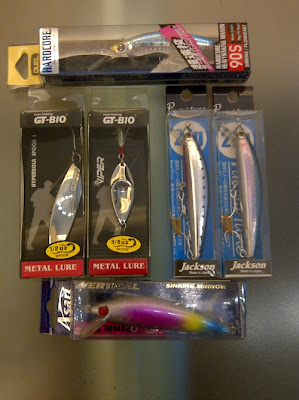 And my Surebite Pagrus from Siow Chiang 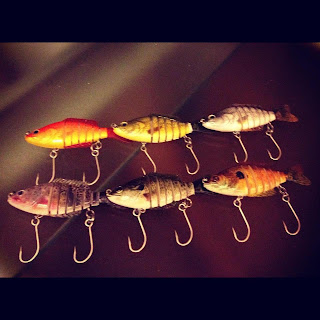 When we got to the pond, some familiar faces were already baiting with their ' Secret Weapon' at the hotspot. I started with the Asari Pinktail, while Jith was using the Duel Hardcore. Right off the bat i had a take on the Pinktail but the fish dropped the lure after a couple of seconds. Damn it. After a few casts, i had only registered two hits and both dropped the lure. Jith had gone off on his own so i went to fish with the baiters.

Baiter: you using Pinktail uh?
Me: Yup.
Baiter: Here got Tengirri Meh? *Chuckles*
Me: Can use for other fish also lah.
Baiter: Anything yet?
Me: Nope.
Baiter: Lure lousy is it?
Me: *thinking of how to answer* 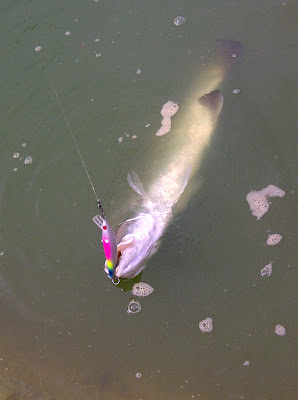 I did not reply as i had cast out again to the same place, and was working the lure over the same spot that got the previous hit. Thump!!! Fish On! This time i made sure i set the hook right. Another Barra. Slightly smaller. Landed him, took a photo and sent him on his way. The baiters were having a ball. Every cast ended up with a hook up of a Seabass. Pretty soon, they were complaining to me about the missing GTs. Lol. I take whatever hits my lure guys. They moved on to another spot. I stayed awhile more, but there were no more hook ups there. I went to see how Jith was doing. He was using a Pagrus, and was having trouble setting the hook despite having hits. I told him what Nick told me when i started out with the Pagrus. Which is to let the lure sink and work the lure slowly. This method had landed me both Barramundis and GTs on previous visits. 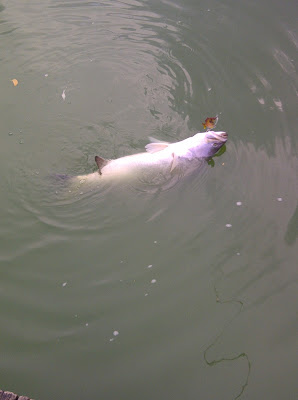 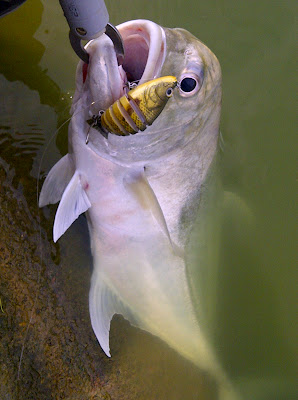 I left him to play with his Pagrus and went off to have a drink and chatted with Nick for a bit. Then i noticed the baiters hitting GTs at Morgan's spoon spot. Changed to a spoon and went out to join them. First cast and BOOM!!!! Fish On!!!! The GT was a handful on my Ajn 5'6 rod and Penn Battle 2000 setup. Just as i was about to land him, he made one last dash. While attempting to reel him back, he got away. Upon closer inspection, i noticed the stock hook had opened up. Serves me right for trusting the stock hook i guess. Went to put on a owner hook. Passed Jith on the way and learned that he worked the lure as i said and lost it to a snag. Yikes! I guess my emphasis on SLOW retrieve was taken too literally. Went back to the spot and there were too many baiters for me to get a clear shot. So i went back to the first spot and hit a fair bit of Barra on the spoon. Kept me occupied til the baiters went home.
First Barra 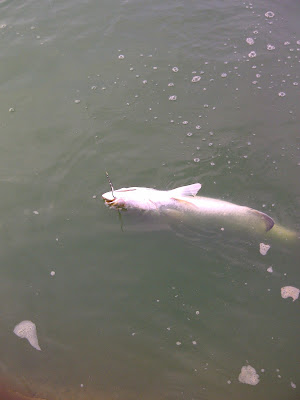 Second Barra. Funny how they always surrender belly up. 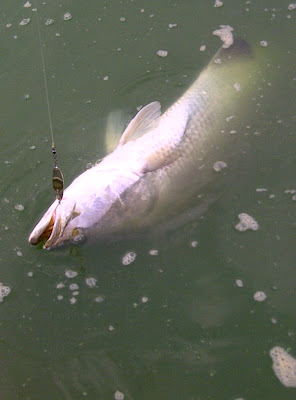 This one was the best one and the smallest of the lot. Obliged my request and went on an extended run, with several jumps. 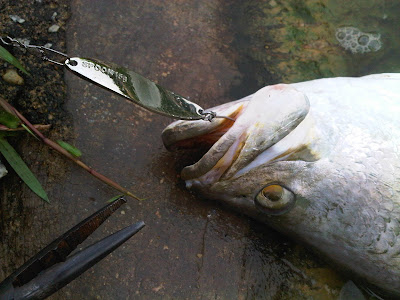 The thing that got away. (probably a barra) 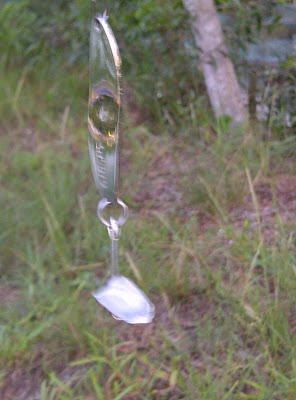 The baiters left as the sun was setting and i went back to the GT Spot. Had a few following the spoon but BAM!!!! Greedy Barra took the spoon a meter in front of me. The GTs swam off and never came back. I guess the spoon is only effective when the sun's up. Went back and changed to the Jackson Pintail Tune. I had seen Nick using this and hitting GTs before. But it seemed like the GTs were not feeding after dark. After a dozen casts, i passed the rod to Jith, who had given up the luring and gone back to baiting. He landed a nice grouper, just before sunset. He cast out the Pintail a few times, and Nick was telling him how to work it when, BAM!!!!! Fish On!!! And what a fish it was. Took him awhile to bring it in on the AJN/Battle 2k setup but it was worth it when the fish was landed. Birthday boy got his Birthday present. It was the big GT, Sam had landed a couple of weeks ago. Having landed it on a hard-bodied lure was a even better. 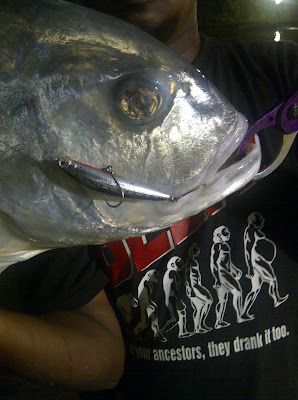 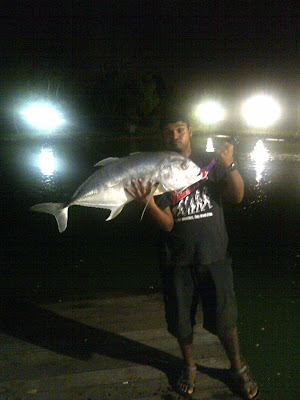 His Grouper caught earlier in the evening. 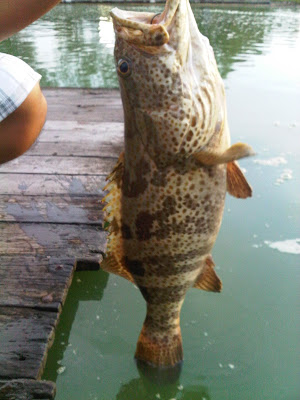 We still had some left over bait, so we decided to use the baitrunner and take another video as the one Lala and i did last week was 'lousy'.

Nick on the baitrunner

Here is some information on the reel.
It is a Okuma 20s sized reel.
Original drag is made of Japanese felt - 4kg. Mod drag is a mix of hybrid carbon pads with tuned washers - 6.5kg with low start up inertia. 6 + 1 ball bearings. ratio is 5.1 : 1. weight of the reel is 340g.
It is available in Camo Green and comes with a spare spool.
(Do let me know if you want to get one and i will pass your contact to Carl.)

Just for laughs. Here is the video Lala and me shot last week. See Lala's shameless zoom in at the end! :
I am using the Baitrunner with a Eupro Salty Fighter. Line is 15lbs PowerPro Slick 8.

Me in action last week.

A little shout out to Ken, who we ran into last week. Ken is the Winner of the Salthead's Heaviest Catch Challenge on June 2nd at Panjang's Pro Pond. See ya soon Bro! 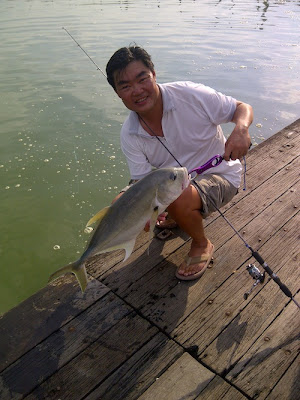 We will be visiting Ubin next week. Stay tuned. :)