June 23, 2012
Woke up late on Saturday, after a long drinking session on Friday.  It was already 8am. Rang Jith up and he just woke up too. Picked him up and went down to the pond. It was 9.30am Sam and Lala were already there. The pond was pretty empty with only 10 anglers including us. Set up my gear and went to buy bait, that's when i realised that in my rush i had forgotten to bring my wallet! Panjang, brushed it off and told me to go ahead and fish as he was going to release fish at 10am. So i went to cut up the Kembong and chit chatted with Lala as i had not seen him in awhile. He told me was our deckie for today as he was not fishing because he had to go off early to meet his gf.

10am came, and the firing line began to form opposite the goalpost area. I took my bait and went off to the fence area as i knew the fish will eventually come by there. (also because i wanted to avoid tangles in the initial chaos that will ensue after fish release.) Got to my spot and what do u know, the fish had taken a detour, and headed straight to where i was standing. The water was so clear i could see and count the number of fish in front of me. They were following this brute of a snapper who was probably < 4kg? Tossed out my bait. Felt the tug and Strike, !@#$#@! i didn't see my line wrapped over my tip. Quickly left dropped the tip into the water to give the fish a false sense of escape. untangled the line from the tip and yanked the bugger out from his rocky hiding place. Re-baited and tossed out again. Fish on!!! Another Golden snapper! by this time the entire pond was around me. Lines were being crossed, fish were being lost to slow reaction of the guy next to you when had a hook up. I got out of it and moved down to the middle of the fence area, where Jith was standing. Just as i got there, i saw the brute (the big snapper) whack his live prawn. Jith set the hook, and the bugger peeled off. The fish cut Jith of at the pole. !@#$%$#@!. By this time Sam had landed 2 Golden Snappers as well. We were all looking of for the Reds but they never showed up. A couple of regulars found a small group of Reds the near the keep nets but it was too narrow to toss my bait there with 3 others already there. Lala and i went off to another spot. We saw a Grouper there. The funny thing was that the Grouper, got spooked by my Tilapia and swam off. Imagine that a tiny Tilapia scaring off the Grouper. Kekekeke.

Went back to the goal post area, took a nice big prawn that Sam had gotten from Sheng Siong and cast it out. Then sat down in the shade as the weather was scorching hot. Saw Jith, land a Golden Snapper. The i saw my rod bend forward and shoot back up. I thought i had lost the fish. As i reeled in the slack i felt a tiny tug. Strike!!! and fish on. I mumbled under my breath as the fish surfaced after two cranks and it looked silverish. Mistaking it for a big milkfish, i quickly reeled it in. To my surprise it was a small Seabass. I took it to Panjang and told him i wanted to release into the Pro-Pond (no one was fishing there.) but i got an earful from him and two of the regulars. Told me to take it home and steam it. As it was table size and just nice for one. Oh well, not his lucky day i guess. Dropped him into the keep net and got myself and Lala a drink. Man was it hot.

I had planned to got to Dave's after the session at Panjang's for some luring, but i had forgotten to bring my lures. So i left my rod in Jith's and Sam's care as i went back to grab my wallet and lures with Lala.
When we got back it was status quo. Nothing else had been caught by Sam or Jith. So Jith and i went off to the fence area which was clear now. Spotted 2 fish hiding near the ledge. One was a Red! Rubbing my hands in glee i dropped my bait in front of him. Absolutely no reaction from him. Jith dropped his Tilapia in front of him and got the same treatment. As i was reeling in my line a GREEDY, little Golden Snapper took my bait! Strike!!! Fish on!!! Landed the little glutton and went to re-bait, and heard Jith's drag go off. Thinking he had hooked the Red i went back to where he was. Golden Snapper. Damn it!!! No reds for the 3 off us. Although when we were about to leave, the Red Snappers started feeding. We decided we'll get them next Saturday and called it a day. Didn't fish at Dave's in the end as there were too many baiters fishing already. So it was home sweet home. :) 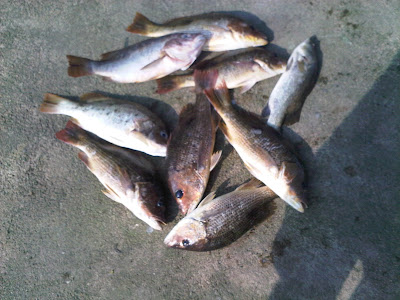