June 09, 2012
So last Sunday, I went down to Dave's GT pond to fish with my friend Carl. For those of you that do not already know, Dave has merged the Barra pond with the GT pond. Unlike before, a booking is not required. You can walk in after 5pm during the weekdays and 3pm during the weekend. It is still a catch and release pond. Luring with single de-barbed hooks and live baiting with circle or j hooks are allowed. Bait must be purchased from them. 20 tilapias @ $10. Walk in rate is $50. Each session is 2 hours long. Last entry is at 8pm.

They are currently running a promotional package. 15 hours for $300, which works out to $20 an hour (instead of the usual $25/hr). For more info on the package, please check with Dave or any of the staff present at the pond.

Met up with Jith, Sam and Sara today at about 3.30pm. Set up our gear and started fishing. Nick told us that there was limited bait available and that we would have to fish wisely. (read: don't feed the fish for free.) Sara was the first to wet his line and he had an instant hook up. The fight was dramatic but brief. A SeaBass what else. The bugger spat the hook back at Sara. Bummer!!! Jith and i were next, Jith with a GT and i had a small Mangrove Jack. These tiny table sized buggers are left overs from the Barra pond promo. I hit another 2 more at the sweet spot and decided to change spots. Sam, (who had been fishing over at Panjang's pond earlier.) came with his float rig and got himself a nice Red Drum. By now a couple of familiar faces had arrived. (Hello Sherwin! Thanks for the tilapias and your assistance.) And there were hook ups everywhere.

One thing to take note of is that, unlike before, where you 'berley' the water and get the fish to come to you, with live baiting, you have to be observant. You have to be able to sight cast. Meaning casting towards a swirl or splash in the water. Or where a fin is spotted. The fish have become wary of un-natural bait presentations. They will not take the bait easily if you are using a splitshot as the fish sinks un-naturally. You may need to use a smaller splitshot that will give you the casting distance and yet let the bait sink in a natural way. ( No problems if you get the big tilapias.) The fish are also quick as i found out today, so you have to react fast.  They made of with the bait before i could close my bail!!!

Back to the action, I went hunting for the groupers, with a fairly large tilapia. I got a huge Golden Snapper instead.  Been awhile since i caught one. I was hoping for an extended drag screaming action and he obliged. Finally got Nick to un-hook him. What a beauty! Jith and Sam soon started Grouper baiting and lost about 4 fishes due to poor hook ups. I went over to the other side of the platform with Carl's son, Colin (an avid angler like his Dad!) in tow. Managed to hook up something big which dashed under the platform. Even with all my rod dipping and pumping action, he still managed to get round a stilt and cut me off. !@#$%$#@! I went off to try for some GT.

Earlier on when i landed my first and second Seabass, Nick and i spotted this BIG GT, patrolling the platform area swimming around the hooked fish looking for scraps. As i tossed my bait into the water, i watched him disappear beneath the platform. Sam was fishing next to me. Thud!!! Fish on!!! It was a GT but not the one i was expecting. A little one, who thought he was a ballerina. While we were goofing around trying to land him, a sliver streak bolted out from under the platform and took Sam's tilapia. This was the Biggie. He put Sam through quite a workout. As this was Sam's biggest fish, Jith guided him through the fight, telling him not to rush, keep the tension, tire the fish and most importantly not lose him. Everyone was watching intently, and there was a collective sign of relief when the big guy was finally landed. We were told that he was one of the biggest GTs in the pond and only landed once this year by one of Carl's friend. Pure elation on Sam's face. Everyone was aiming for biggies. I had an unexpected hook up near the grouper spot. The take was so strong that the rod was yanked out of my hand. Fortunately, i managed to grab hold of the rod after one of the guides hit the platform. He was running under and at the same time we thought Jith's line had gotten tangled with mine. After some serious rod dipping and pumping i managed to pull the fish out. It was a big Mangrove Jack. This is when we realized Jith was hooked onto a fish as well. He had to pump and dip his rod to bring out a beautiful Queensland Grouper.  Jith and i called it a day after that. Sam, continued fishing for another 1/2 hour as he joined us later. No other biggies save for a grouper from another group was landed.

So what about Sara??? He lived up to his nickname. Seabass Sara caught mostly Seabass and an odd GT or two. :P He had to leave for a family function so he left a little bit earlier. 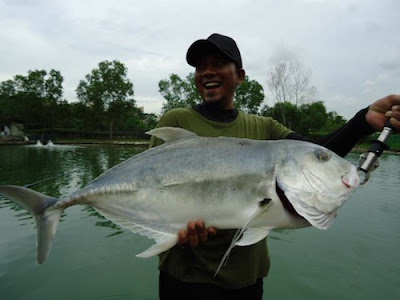 Sam, Congrats on your first big GT. May there be more to come. Tight lines! 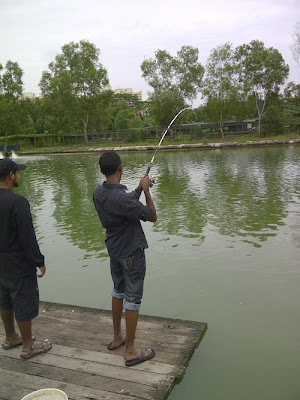 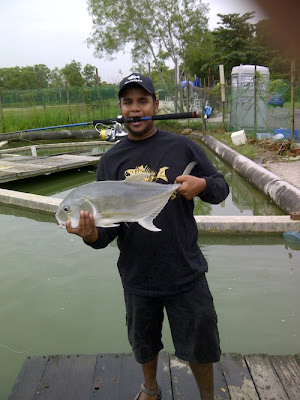 Jith and his GT 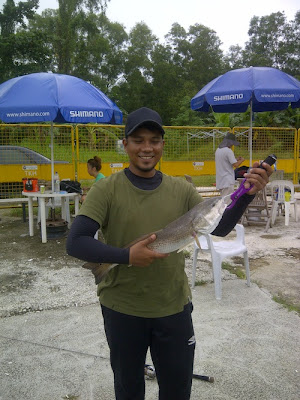 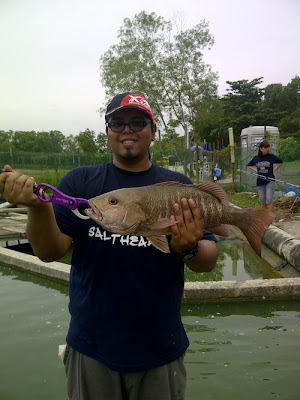 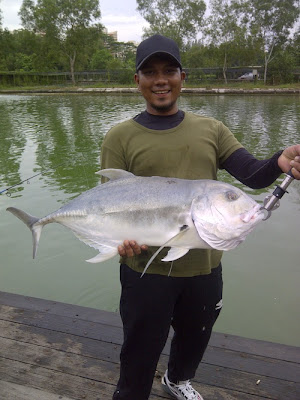 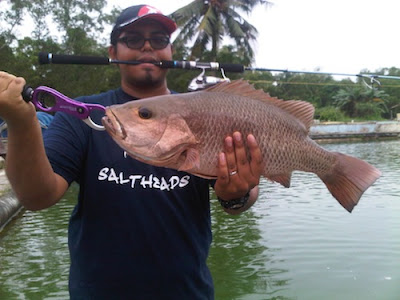 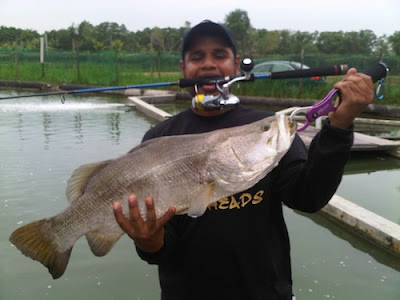 They were out in numbers. 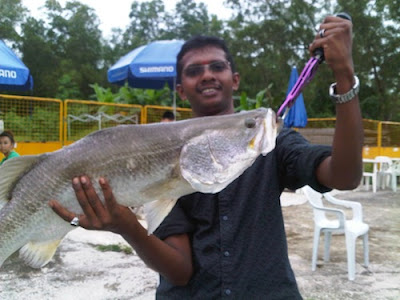 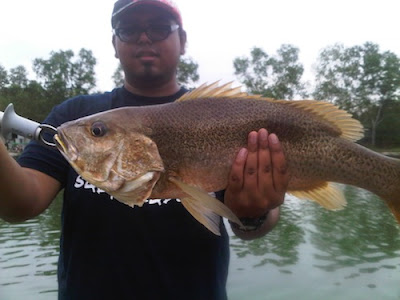 He put up a good fight 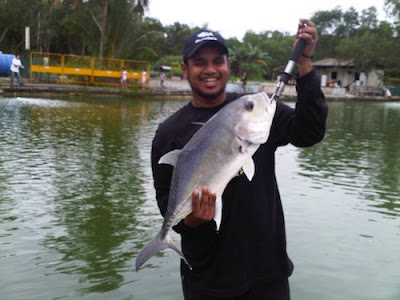 This one was a little confused at first. Then off he went. 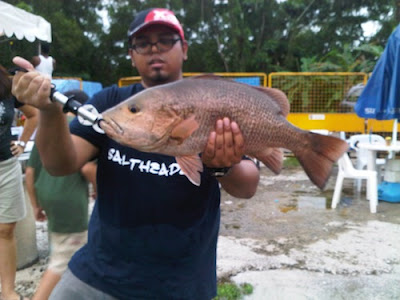 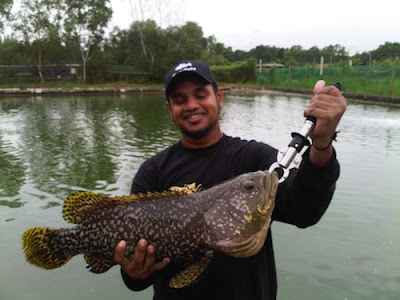 Finally her majesty decides to grace us with her presence. 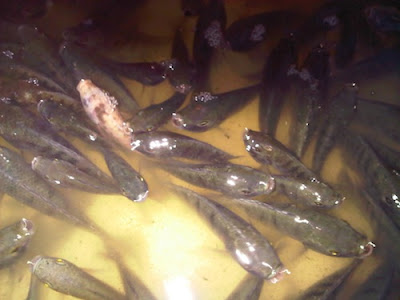 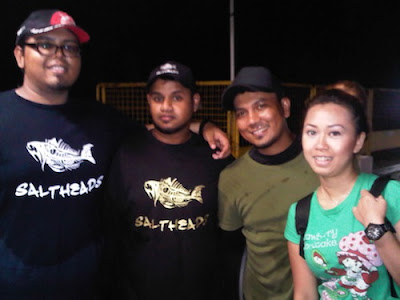