June 17, 2012
I have to admit, that Dave's C&R pond is keeping me pretty occupied recently. I have renewed the promotional package for the 2nd time. I have also learnt to appreciate the art of luring a little better now. I never had the patience of some of my friend's like Carl and Vina, who cast and retrieve constantly, some times without registering a bite for extended periods. However, things changed last week, when i was goofing around with a rubber lure and had an EXPLOSIVE take. I instinctively set the hook and the fight was on. Once the i landed the Seabass, i had this immense sense of satisfaction. The sudden take gave me such an adrenalin rush. It was truly an awesome moment. My friends who lure frequently, have been giving me advice on how to work the lure. Lure presentation seems to be at the top of the list. Needless to say, i think i will exploring this style of fishing a bit more. :)

Couple of days ago, my Grandma called me up with a request. She wanted some Red Snapper. Rang Panjang up and asked if there were red snapper in the pond and he said yes. Went down on Saturday morning on a solo mission. I had something to attend to in the afternoon so i opted for a 3 hour Pro-Pond session instead of the 5 hour Main Pond session. As i was setting up my gear, Panjang told me that the pond was closed til the next day and that i could only fish at the main pond. I explained that i was pressed for time and i was only there to get some red snapper for my Granny. Being the kind soul that he is, he actually got someone to catch me a Red Snapper! This dude never fails to amaze me. I thanked him and told him I'd be back the next day. Later that afternoon, once i was done with my errands i went to Dave's to cure my irrepressible urge to fish. Kekekekeke :D

Met up with Jith and Sara on Sunday morning at the Pond. We set up our gear, got some bait and waited for Panjang to come collect his coffee and the money. He told us there would be no fish release as fish were already released directly into the pond. He smiled and told us, Ang Kuey many many. Sara was the first to drop his line and he barely had time to close the bail arm. Fish on!!! Landed a nice Golden Snapper at our usual spot. I was next to hook onto a fish. A Golden Snapper, who thought he was a Grouper. Frayed my 20lb flouro leader quite badly on the ledge with his diving antics. ( the water is so clear u can see them take the bait and run when hooked.) Jith got his fish while Sara and i were re-baiting. Some how this Golden Snapper swallowed the hook and he had to re-tie the rig. By this time we were 'joined by two old guys from the main pond.' They kept saying 'loh jiak' 'loh jiak' but didn't hit any fish. I was standing next to them and hooked up another fish. But the hook didn't set well i guess, and i got hit by my splitshot in the face. (OUCH!) Sara with a fish on and the fish threw the hook. The old men were crowding around us, and still not getting fish. kekeke. I saw my float bobble, go down a little and come up. In my heart i knew who had come to play. Float went down, STRIKE!!! Fish On!!! Landed a nice Red Snapper, re-baited and dropped my line at the same spot. Reddie again!!! I love it when they congregate in the same spot. Hooked a third one in less than 5 minutes. This time i lost the fish when the hook came out when i grabbed the leader. Jith and Sara were in the same boat as the two old guys. No bites and they were inching their way into my spot. ( good thing i am big enough to hold them off.) Ran out off prawns and went to get some. Came back and saw my spot was taken by the four of them. So i just watched for a bit. The old uncles were not catching fish cos their float rig was too short. The pond is 8 feet deep and their leaders were barely 2 feet. Sara was casting into the middle when the fish were hiding under the ledge. And Jith, i don't know why he wasn't hooking them up as he usually does. (maybe the stars were not aligned? ) :/

Went off to my second spot, Fish on in an instant. Golden Snapper. Landed it in 3 minutes. Got another one after i re-baited.  I was 4 up at this point, with Sara and Jith on 1 each. One of the uncles finally got a bite after ditch his float. He was in the Red Snapper spot, unfortunately the fish got the better of him and got away. Jith went to the same spot as the uncle and got himself 2 nice Golden Snappers in quick succession. The frenzy stopped after that. The uncles went to the main pond to fish and another guy who arrived later got himself a Golden Snapper. Jith went off to his favorite spot, while Sara and i stayed at the hotspot. A couple of minutes later Jith and Sara both had a hook up at opposite ends of the pond. Jith's fish ran into one of the tunnels and it took some skill to get him out. It was a Golden Snapper. Sara on the other hand was still fighting his fish. The fish had not surfaced yet and kept diving. I thought it had to be a Grouper, but Sara said it was a big Snapper. In the end we didn't find out as his leader got cut off on the ledge. He redeemed himself shortly after with another of the same species. Jith hit a Golden Snapper shortly after and i had zero action! Took out a shrimp lure to pass some time. Lady luck was on my side. I landed another Red Snapper on the lure!! =D

10am came and Panjang noticing the glum faces gave us a 30 minute transfer to the main pond for fish release! YAY!!! Jith and Sara landed some fishes at the main pond while all i did was lose fishes. Lost 4 in a row due to thrown hooks and burst lines. Decided to call it a day after that and went to snap some photos of the Pro-Pond catches while Sara and Jith continued fishing in the main pond. ( I think they landed 4-5 more fishes. A mix of Red and Golden Snappers.) As i was walking past all the keep nets, i kept seeing at least 1 Red Snapper in each basket. The Reddies Are Back!!!!  My Granny is going to be a very happy old woman. :) 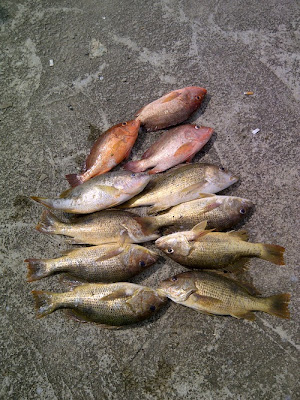 Anyone know what bird this is? 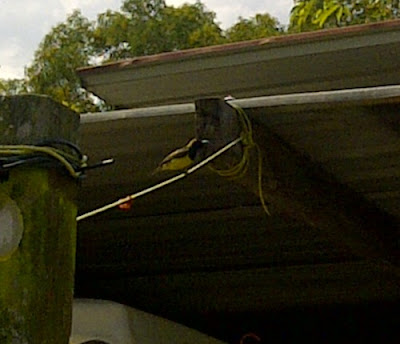 On a side note, I have been receiving quite a PMs and emails asking for tips, spots, baits etc. While i am happy to share the info with you guys online, it would be best if you guys actually come fish with us. So you can see what we use/do. Thats the best way to learn. Add us on Facebook, https://www.facebook.com/saltheadsfishing or Just come up and say Hi. :)