May 20, 2012
Got a call from Sam this morning. He told me he was heading down to No.2 FW 1 Pro Pond for an afternoon session. Couldn't join him as i was stuck at HDB with my wife, so i told him i'd pop by for a little bit.

Got there a little bit after 4pm. I was told by the guys fishing, that there was no fish release ( only 4 anglers) and that there were many surface cruisers, including two Groupers in the 3kg range. Walked around the pond, and realized that all the fish were hiding under the fish nets. ( the water is so clear you can see the bottom.) Tried to help Sam out. Succeeded in 3 hook ups on floater rig. All Golden Snappers. Unfortunately, they all spat the hook as we were about to lift them out. Was just one of those days for me i suppose. One guy then landed a Pomfret and a brace of Mangrove Jacks in quick succession as the session came to an end. Some other dudes were trying to foul hook the Groupers with treble hooks! In the end Panjang offered everyone there 2 fishes despite of their individual catches. That was very generous of him. We left after that.

Unsatisfied with the lack of fishing, We made plans for round two. Decided to head down to Auntie Pond in Punggol as Sam had not been there before. We got there at about 6.30 and set up our gear, the Auntie told us that the last release was at 5.30pm. Rats... Sam casted to the nets, while i went to the side of the net with a float. Barely a minute after i threw out the prawn. The float went down. Strike!!! Fish On!! Then it spat the hook. !@#$%$#@!@#$#@! Went back to my spot and casted out. Nothing for the next hour, so i switched to a smaller hooks to try to catch Pomfrets as they were swimming around quite happily. I had no luck and when i got back to our table, Sam told me he had landed a Snapper on a floater rig. I didn't even see that happen. Was too focused on the Pomfrets! Before we knew it, 9 o' clock came by and Aunty released some fish again. Tossed out my line and had a take. ( or so i thought) Strike!!! and the pull was strong but it was a cross line with another angler who had a fish on. Sigh.... Switched spots after the bites died down but still nothing. Then i saw Sam landing a Mangrove Jack, followed by two more Golden Snappers at the same spot. I went over to him and cast out near him. Then i felt  tap on my shoulder.

Pond Uncle: Eh, you got fish or not?
Me: Nope
Pond Uncle: you don't throw far. Throw here. ( points to spot with his torch.)
Me: Ok.

Nothing happened after 5 minutes.

Pond Uncle: Wait, (took the rod, re-cast to his spot, did some adjustments)
Sam and i, in the mean time were talking about something else...

Tap Tap... I turned around... and saw him smiling and pointing at my rod which was bending.
Fish on!!! As i was fighting the fish, i saw him smile and walk away. When the fish came up to the surface, i saw a Golden Snapper. What was amazing was that, somebody had hooked this fish up and lost it. By the slimmest of chances my hook, caught the swivel through the eyelet!!! After that someone told me that Auntie came to remind Uncle that my time was up, but he decided to let me hook up and land a fish before i left. His kind gesture made my day. Pond operators like him and Panjang are the sole reason i ( and many others) patronize their respective ponds. Thumbs up to both guys for knowing how to look after their fishes and their customers. :)

Next weekend, is the re-opening of the Main Pond in FW1. After that i have a trip to Desaru, followed by our competition the following Sat. It's going to be an exciting few weeks. Stay tuned. 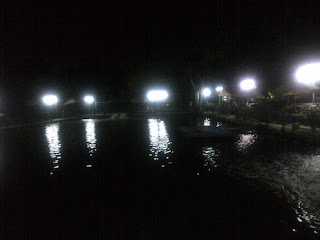 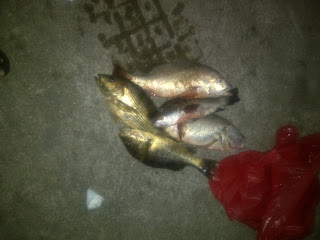 Sam and his Catches 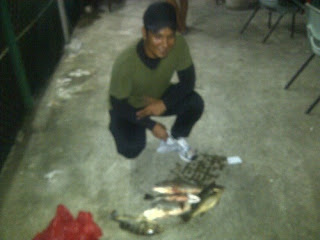