May 09, 2012
We've been kinda busy the past few days, so we couldn't really fish much. But we managed to squeeze in a session at the Pasir Ris Pro Pond. Enjoy!

Met up with Stephen aka Lala for supper and we decided to fish after that. Couldn't find any Kembong so we decided to use milkfish instead. Setup our gear and cast out our lines and waited. The other people using Kembong were getting occasional hits but nothing took our milkfish in the first hour. Lala changed to a floater rig and soon after got himself a good sized Grouper. The fish put up quite a fight but eventually surrendered once it got to the surface. While unhooking the fish, i showed Lala how close he was to losing it. The hook was barely set on the side of the mouth. Talk about good fortune! He grinned and said, ' i have a feeling that this won't be the last one for today.'

He was right. He landed a Mangrove Jack and a Golden Snapper over the next 30 minutes at the same spot with the same bait. Still nothing for me. I walked around and found some dead prawns someone had left behind. One man's trash is another man's treasure! Hooked up a dead prawn, and tossed it hopefully towards the net area. Felt a 'thud' as i was reeling in the slack. Reeled in the line slowly and waited for the fish to make it's move. Felt like an eternity, but the fish finally tugged the line. Strike!!! Fight was brief and it was my turn to land a Mangrove Jack. Carefully unhooked him (read the last post and you'll know why i handle them with such caution.) and threw him into my basket. Re-baited with a piece of the smelly dead prawn and cast out to the net again. Goalkeeper!!! I hardly had time to reel in the slack as i saw my rod bending as soon as i put it into the rod holder. The fight was thoroughly enjoyed. I landed a big Golden Snapper. Hooked up the last of the dead prawn and threw it to the net area again. It fell a little short of my intended target. Too lazy to re-cast so i went to see what Lala was doing. He was busy playing some fishing game on his phone. So i went to check his bait for him. His bait was gone. Too engrossed in the game that he probably didn't see his float go down and come back up. Hooked up a milkfish, walked over to the big tree and cast out. Passed him his rod and went back to mine.

My line was slack, and as i was reeling it in, i realised that the line was coming towards me. Reeled in the slack as fast as i could and Strike!!! Fish on! I had no trouble landing this Mangrove Jack as it was gut hooked. Decided to cut the leader rather than salvage the hook. (For obvious reasons! I was not going to be bitten again!) Saw Lala fighting a fish while i snelled my hook. He landed a table sized Seabass, which put up quite an acrobatic show. I put on a float and cast out to the net. Float bobbled after awhile and went down and came up. I thought it was a Red Snapper. I waited for the float to go down again and Strike!!! Fish On! Landed another Golden Snapper. Lala took the last milkfish after his Seabass, so i scavenged around and found half a prawn. Hooked it up and tossed it out near the pump. Lala had a huge take and the fish went straight to the crocs and cut him off. A big Golden Snapper, claimed a passing busy body. I spotted my float go down, Strike!!! Fish On! But not much of a fight at all. I landed a Pomfret. Usually anglers use small hooks with bits of prawn meat when targeting this species. But this glutton of a pomfret had taken half a prawn on a 4/0 hook! Just his bad luck i suppose. We packed up after that and went for a much deserved beer!


My Catches for the night 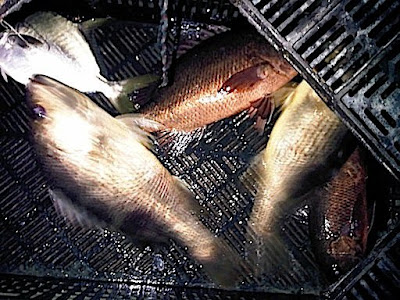 Lala's Catches for the night 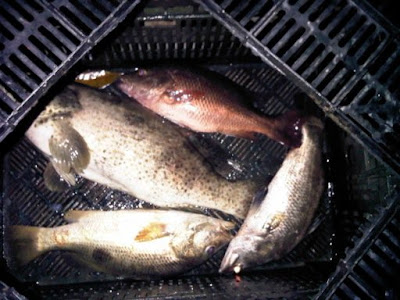