May 17, 2012
Went down to PRMP recently. I couldn't stay long so i got there about 30 minutes before the fish release. Set up my stuff and got 100g live prawns. Did some spinning with live prawn while waiting for the fish release. After my fourth cast, i got a 'thud' as i was reeling in. Waited while the fish was chomping away. As the bugger took the last mouthful and swam away, i set the hook. Fish on!!! After a brief but enjoyable fight, i reeled in a Red Drum. Un-hooked him and threw him in the keep net. Re-baited and cast out. Was spinning slowly and looking at the fish i caught. I have landed many Red Drums before but the bluish hue on their tail never fails to fascinate me. Must be the heat talking. Kekekeke.... I had a hard take and Zzzzzzz... The line was peeling out of my reel. Tightened my drag a little and pumped the fish in. It was a pretty big Golden Snapper, but he wasn't done yet. He went on 2-3 mini-runs before he finally succumbed to his fate. :D

Fish Release:
Switched to Kembong, and waited for the guy to release the fish. I was pretty close to the net with my toss. Waited with the rod in my hand. Chomp, Chomp, Tug, Fish On!!! Pulled up a decent sized Mangrove Jack. Re-baited and cast my bait to the same spot. Everyone who was around me had landed at least a fish each. It's going to be a good day! STRIKE!!! Fish on! Landed myself another Red Drum.

After that there was totally nothing. Changed to a floater rig, with live prawn and moved to the area behind the pump, where the nets are. Tossed out the prawn and parked my rod. Some guy who was standing beside me at my first spot hooked on to a grouper, barely a few meters infront of my keep net. Talk about good luck!!! Anyways my floater wasn't moving, so i reeled in the line and cast out again. It looked like the floater went down almost immediately, but it popped back up. Must be the heat and my eyes playing tricks on me, i thought. But it went down again and came back up. I took my rod in my hand and waited for the float to go down and stay down. Strike!!! Fish on??? As i reeled in the line i could feel something on the end of the line. It wasn't resisting much, just occasionally shaking the head. As it got nearer, i saw that it was a Red Snapper. It wasn't really that small and didn't put up a fight at all. I came to the conclusion that this was probably a senior citizen of the pond. Went back to my keep net and dropped the 'old man' in gently. Casted out again with a live prawn but no action for almost 40 minutes. Gave my remaining bait and my ticket to the Grouper guy and decided to pack up. He enthusiastically cast out his second rod and went to the Gents. I was almost done packing and i turned around to see his rod bending. I fought the fish until Grouper guy came running. Passed him his rod and let him continue the fight. He landed a nice Golden Snapper. Told him to have a good time and i headed back home. Not a bad catch for 4 hours of fishing. 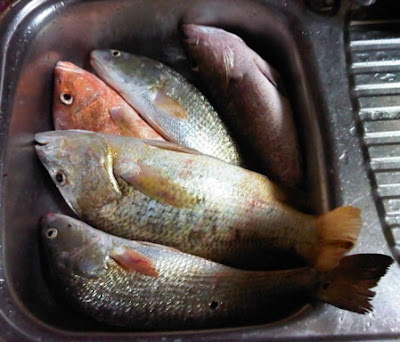