May 26, 2012
Been looking forward to the re-opening of the pond after a 2 week cleaning period. Got to the pond with Jith at about 7.10am and the hot spots were already taken up. Damn it! And i thought i was going to be early! !@#$%$#@!! We moved to the last shed on the right on Panjang's suggestion and set up our gear. Got our fish baskets and bait.  We were told that they will be no release at 10am as the fishes were emptied straight into the pond. We settled down and waited for the 8am start time. Sam arrived a little later, and by this time it was really crowded. A family, who were there for the first time, couldn't get a spot so we squeezed a bit and let them in. The mother then exclaimed gratefully, ' you all will get the biggest fish today!' Ah, if it were only that easy. :)

8am and Panjang gave the green light to fish. All the lines hit the water and an immediate frenzy ensued. There were hook ups everywhere, near and far. Fish were being landed and lost in a chaotic manner. The big Snappers and Seabass put up quite a show, causing crossed lines, putting up acrobatic displays.  The Groupers, added to the excitement every time they were landed. In the first 10 minutes alone, 7 big Seabass, and a couple of Big Snappers were landed.

So what about us? On the first cast, Sam was the first to hook up a Golden Snapper, within a few seconds Jith hooked onto one too. I had to wait a little bit longer, but my Golden Snapper followed a minute later. He was a pesky one, and almost caused a tangle between Jith and me. Fortunately Jith was quick to react by raising his rod so that i could go under his line and land my fish. As i was about to lift my fish out i saw Jith's rod bending ever so beautifully. The brute at the other end had Jith running all the way to Panjang's hut and back. It was a Big Golden Snapper. I passed my rod to Sam and tried to help Jith land the fish. But it was hard as there were baskets everywhere. It didn't help that the fish was tangled around the leader. Finally i managed to grab him by the tail, and another angler held him by the gill and we lifted him out. No time to admire the fish, Sam had a fish on, i took my rod back from him as he fought the fish, but he lost the fish as the leader gave way. I saw my line swimming towards me and STRIKE!!! Fish On! The fish dashed under the ledge as i tried to pump him out. It emerged briefly and i saw that it was a table sized Grouper. As i tried to find a spot to land him, he dashed under the ledge again and cut me off in the process. !@#$%$#@! I turned around cursing under my breath, and saw Sara standing there setting up his gear. Told him to hurry up and went to re-tie my line. I re-baited and cast out and saw that Sara was still not ready. Chomp, Tug, Pull. Fish on! Landed a feisty Mangrove Jack.

It went absolutely quiet in front of us after that. The guys who were near the pump were stilling hooking up fish and everyone was trying to squeeze in and get in on the action. Some one landed a Big Seabass on the opposite bank beside Dave's pond. Then another Big Seabass near the GoalPosts. I put on my floater and headed to the platform. Dropped my line in and waited, when a screaming drag got my attention. Sara was hooked onto something big. It was peeling line out of his reel. A minute in a Big Seabass surfaced. It stayed near the middle for as long as it could before Sara forcefully reeled it in. Panjang came and lifted the fish out for Sara. He offered 5 free hours of fishing if the Seabass was released. While most of the Big Seabass were released, this one, along with two more  caught by others in the earlier frenzy went into the baskets. It started to rain briefly, but it was only a passing shower.

The rest of the day, saw the guys near the pump hook on and miss several big Seabass. One guy in particular hooked onto three of them. Unfortunately, the hook didn't set well on all the occasions, and the fish were lost. I was standing next to him when he hooked on to one, and he told his friend, SeaBass...Tard as it spat the hook. (pretty clever to combine his excitement with his agony) One of the regulars had a big take on a float and there was a big commotion as everyone thought he had hooked on to a big Grouper. It seemed like the fish had gone into a hole and outsmarted the angler. But 'Botak' as he is affectionately known in the pond had other ideas. He left his line slack and waited for the fish to swim out before pumping it up. Turned out to be a Golden Snapper who thought he was a grouper.

I had one more take on a floater rig. The fish dashed under the ledge as soon as i struck. I thought i was a Grouper, but the Uncle next to me said, 'It's a snapper, give him some slack and the fella will swim out.' I gave him some slack and sure enough, he swam out. Pumped him out and threw him in the basket. It was almost 1pm and William who is joining us for the competition next week showed up to collect his tickets. Chatted with him for awhile, posed for some pictures and we decided to pack up. Panjang asked us to extend as there was to be a fish release at 3pm. It was tempting but with the rain clouds looming, we called it a day. It wasn't a great day in terms of catches for us, but it sure was fun. :) 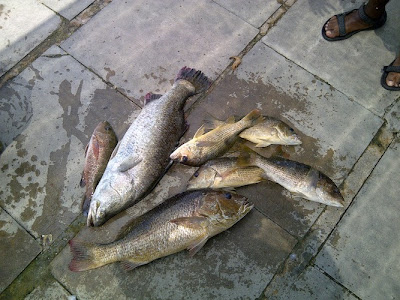 Jith and his Snapper 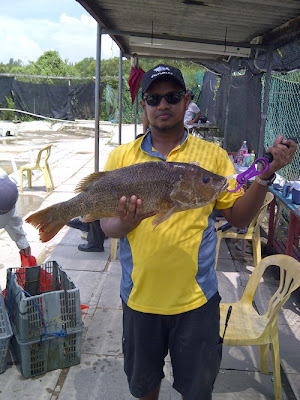 Sara and his Seabass 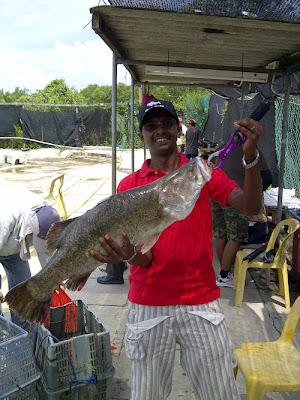 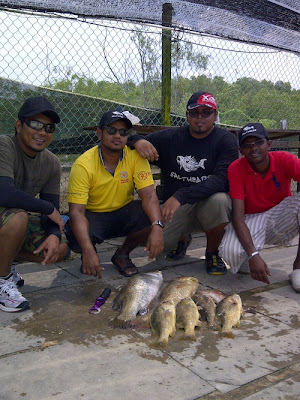 Am heading up to Desaru with Jith and Kenneth on Monday... Stay Tuned. :)