May 01, 2012
It was a last minute decision to fish, so me and K went to try out the main pond since we had not fished there in awhile. We arrived way after the last fish release. Set up our gear, got some live prawns and started fishing. Another friend S decided to join us and brought some supper. I casted out to the net area between 'goalposts'  while K was using a floater rig nearby. We sat down to eat and catch up with S after that. Barely 10 minutes had passed, when K's rod bent violently, he reacted quickly and it was fish on. It was putting up a good fight on his light tackle and eventually came up. It was a nice looking mangrove jack. As i grabbed the leader to unhook the fish, (i must have held the leader too close to the fish.) the bugger BIT me. !@#$%^%$#@! For those of you who have been bitten by a mangrove jack, you will know how much damage those fangs can inflict. Threw him in the basket and went back to fishing. Short time later K's float disappeared again and another mangrove jack was landed.

Totally no action on my rod. Decided to employ a different strategy. Grabbed a floater and hooked up a kelong sotong and made my way to the fence area to my favorite red snapper spot. I dropped my line and looked across the pond to see K on his 3rd fish. (A golden snapper as i would learn later). Looking down i couldn't see my float. Ah Ha! Success!!! Reeled in the slack and STRIKE!!! Fish on and it was strong, very unlike a red snapper. Carefully steered the fish away from the metal poles and landed a Red Drum (Taiwan Ngor) Dropped him in the net, re-baited and went back to my spot. This time i was watching as the float disappeared under water. STRIKE!!! Fish on! Similar fight, similar fish. Another one for me. Passed my rod to S and went to take a leak. When i got back i saw S fighting a fish on my rod and K getting ready to strike his rod. S landed a golden snapper and K was reeling in another fish. It turned out to be another mangrove jack but we lost the fish as the hook came off as we were about to land it.

I went back to my spot by the fence, threw out my line and  waited for the kelong sotong to do it's magic. A little while later, there was a little bobble. The float went down and came back up a few times. Red Snapper !!! I told myself to be patient and not rush the strike. Once the float went down for good, Strike!!! The fight was brief and up came a nice looking red. Re-baited and tried the same spot again. Didn't have to wait long, as the float started bobbling again. Fish on!!! Another red landed. Hooked on my last piece of kelong sotong and threw it out. Nothing for a good 10 minutes, thinking that the fish were already spooked, i started reeling in my line and walking back. When the float was about a meter or so away, i had a huge take. I didn't even have enough time to react let alone set the hook. The fish went straight towards the steel poles. I managed to pump the fish out. It was a mangrove jack. The biggest of the night. As i was walking back, i saw this huge seabass resting in the shallows. It swam away as soon as it saw my shadow. Not my cup of tea anyways. Threw the MJ into the basket and was told that we were leaving soon. S and I packed up while K hooked up the last two prawns and dropped his line. He had a hook up as we were pouring out the fishes from the basket. He yanked his rod so hard that the fish flew out of the water. It was another red snapper. 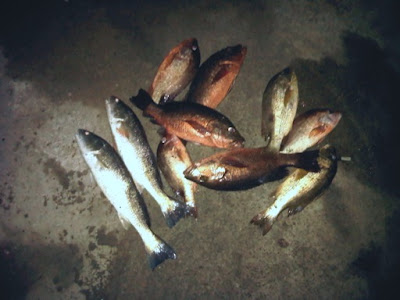 As usual the two of them dumped all the fish to me. As none of them were gut hooked, they were still very much alive when i drove off. I could here them flapping about in the styrofoam box in the boot. By the time i got home the fish tail symphony was almost over. As i put the bag of fish into the freezer, there was one last flap and this happened... 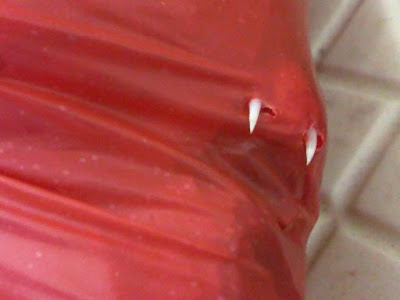 I had him for lunch the next day! 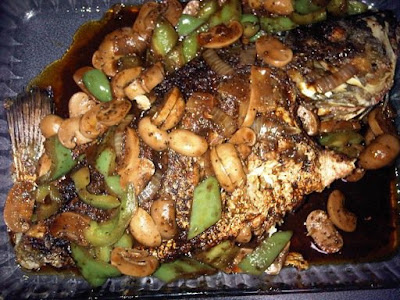