May 12, 2012
After getting some news that Panjang had drained the main pond and that the Pro Pond was packed to the brim, ( Thanks for the heads up Sam) I sat at home wondering where i should go to get my fix this week. As i was scrolling through the forum, i saw Dave's post about the Promotion they were having at the Barra Pond. 3 hours for $60 with live baiting (20 cent each for mollies, 50 cents each for tilapias) C&R for all Sea Bass and everything else you catch you keep. (post stated there were MJ, ACK, KC available) I called up Jith, Lala and his brother Sam (who had poor session in the morning at Panjang's pro pond) and asked if they were up for it, and they said yes. Called Dave and found out no booking was required and it was walk in after 3pm.

Arrived and set up our gear, Marcus was assisting us for this session. Saw the fishes swimming about. Told Marcus how many Tilapias we required and he got them for us. All lines were in the water and the fish were hungry. There were multiple hook ups, several times in the opening few minutes. Some of the fish didn't even wait for the bait to sink. They came up to the surface to eat. :D

A family joined us, and they were on a snapper hunt. Landed two in about 10 minutes with their live prawns. It was pretty cool to see the kids enjoying themselves, landing the fish they caught. Lala wanted some snapper too. He caught one within a few minutes of saying he wanted one. But as always, his impatience got the better of him and he lost the fish while trying to lift it up with the rod. As usual laughter from everybody at Lala's expense. He claimed he was 'suay' today. Morgan, who was watching retorted with, ' Lala you everyday also 'suay' la. GT pond also 'suay'.' More laughter. He hooked on to another Mj later on, and did his best to stay calm, but the fish spat the hook. MORE LAUGHTER. He turned to me and said, 'You going to blog about this right?' I smiled. Damn right i will blog about it. :P

Marcus came up to me and told me to cast as far as the white structures or beyond. He said the fish in the front were lazy and used to being hooked and released and don't put up much of a fight. Hooked up a pretty fat tilapia and cast just short of the white structures. He was right, the Seabass i hooked up was not very big but he sure as hell put up a good fight. A word of caution though. When you cast beyond the white structures, you got to be fast once the fish is on. Steer them towards you so they can't go round the structures to cut you off. Another tip is to leave a little slack when you are using circle hooks. Sometimes the hook doesn't set when the line is taut as the fish swims off.

Sam and Jith were landing Seabass left and right. Sam had a good session, even though it was his first time at the pond fighting Barra. He even showed his brother how to land a fish on a floater rig with a circle hook. Poor Lala. Hahahaha.

I hooked up a little black mollie and threw it out. The bites were getting a little sporadic, so i took a seat on the chair and did some spinning. Knock, Knock Knock, Fish on! The take was different so i knew i had a Snapper. Landed it, gloated at Lala and then gave him the fish. Some other anglers at the pond also gave him their mangrove jacks. Was very kind of them to do so. Maybe they felt sorry for him as he 'kenna suan' by us non-stop. :D

A lady angler, who came a little later showed us that Barramundi, when hungry will eat anything including Bread. Yes you read right. BREAD. She landed quite a few of them and also a MJ which she gave to Lala. Pretty cool huh?

Soon the sun was setting and we had almost used up $50 worth of tilapias. With only about 20% being misses. ( Read mostly LALA.) Hooked up the last mollie of the day and threw it out. Passed the rod to my wife once there was a fish on the line. She landed a pretty healthy Barra. Jith, who was watching some guys using lures, decided to cast his minnow out. It landed on the white structure and wrapped around the pole. Bye Bye Minnow. We called it a day after that. It was an extremely fun fishing session and we throughly enjoyed every minute of it. A big Thank You to Marcus and Morgan for assisting us.

Here are the Pictures!!!


Jith with the first fish 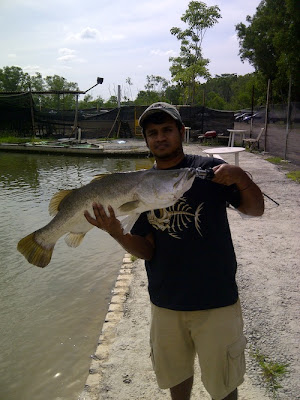 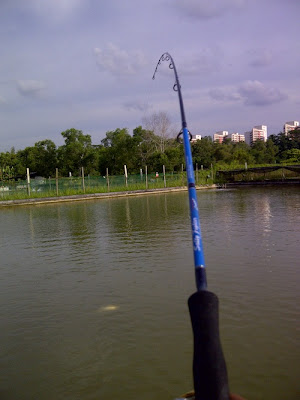 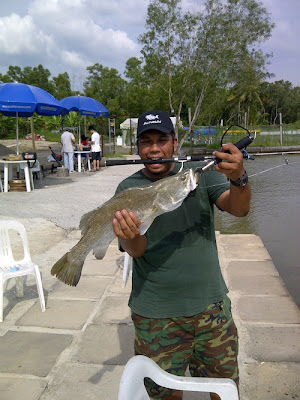 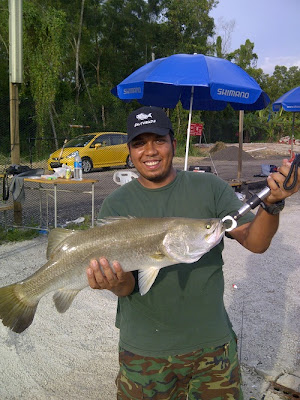 His 'best catch' of the day 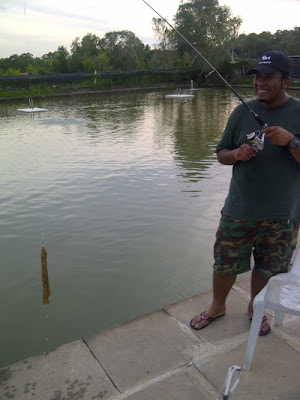 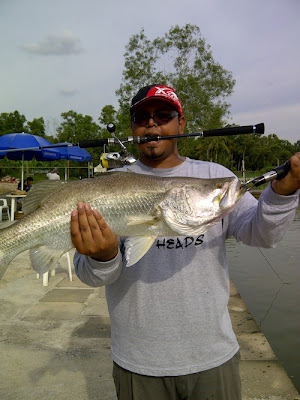 And another one for me 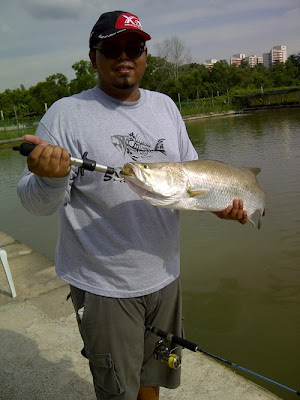 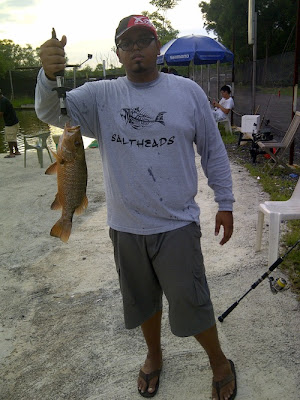 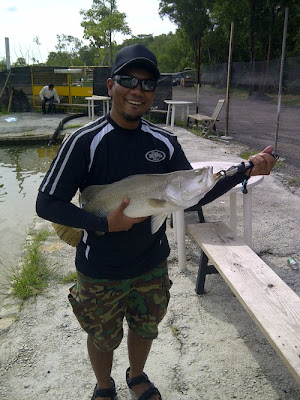 This one was on float 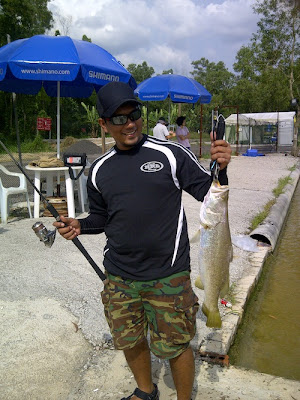 His biggest i think 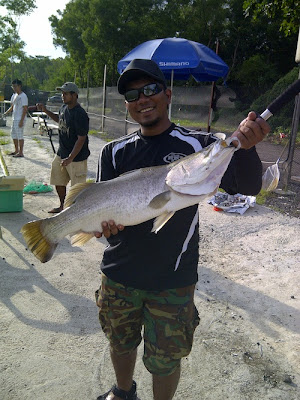 My wife getting in on the action 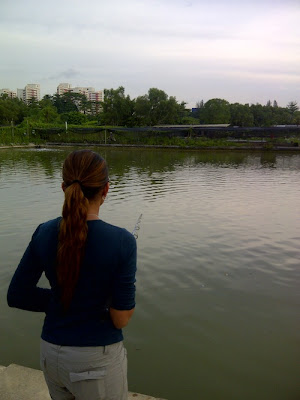 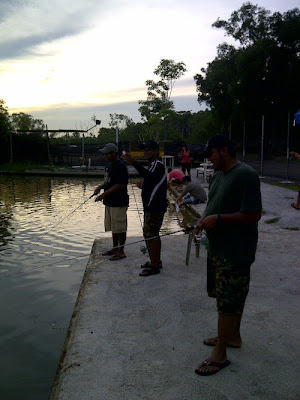 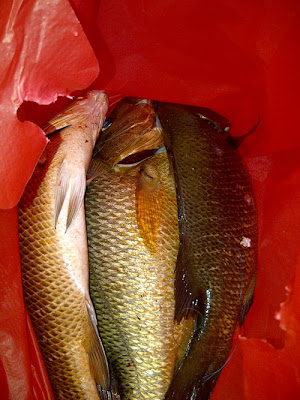 Here is a bonus for those of you who are visiting the blog.

Panjang Pond Drained. They are cleaning up the trench where the big groupers love to hide. 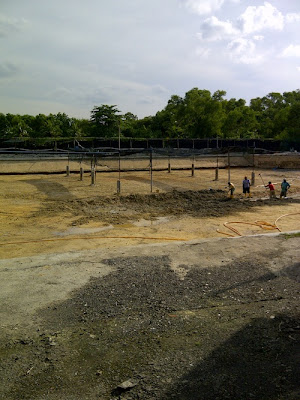 This is Ah Kong, The Oldest Grouper in the Main Pond. 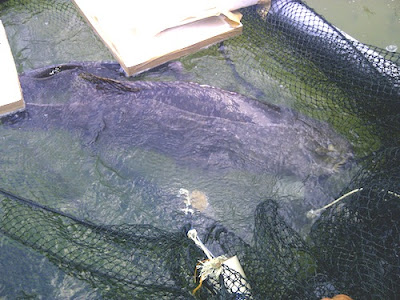 And this is Ah Kong's Friend. 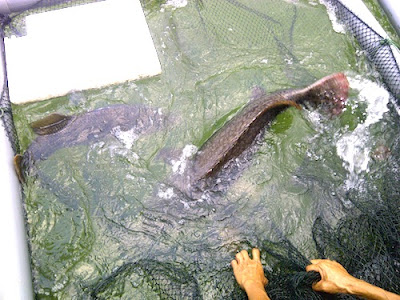 Sadly, Ah Kong, his friend are going to be exchanged for two giants weighing in at 18kg and 20kg. Good luck trying to land them.

Now that you know the terrain, use it to your benefit. :)

FYI.
The Heaviest Catch Competition Organized by us on June 2nd at Panjang's Pro Pond is SOLD OUT! :)