April 12, 2012
This 1 day 1 night trip was planned in early January, and was actually for us to go to Horsburg/Eastern banks. However, our boatman, the giant grouper man, Ah Poh called about 3 days before the trip to inform us that there was not much fish being caught by the other boats that were coming back and suggested we go for big ang chor and groupers in Karimun. He generously offered to depart at midnight (at no extra cost) on Friday so we could catch the morning tide.

Finally Good Friday weekend came around. And on the night that were we supposed to depart, the freaking guys from Tuck Lee Ice didn't deliver the ice that Ah Poh ordered. To make matters worse, they could only deliver it by 6.30am the next morning. So we decided to grab some sleep (not that we could actually sleep) and set off in the morning. We got some live prawns that Ah Poh told us to get, along with some snacks to munch on, and off we went.

We boarded the boat and set off to clear customs, while we were waiting for the customs boat to come to us, we saw a catamaran (i hope i spelt it right) full of bikini babes next to us. Time for the camera, this is when i discovered that my stupid handphone camera wasn't working. !@#$$$#@! While we were waiting for customs to return our passports, Ah Poh asked us again if we wanted to head to Eastern Banks or Karimun. After a group vote, we decided to go with Ah Poh's recommendation of Karimun.

The long journey to Karimun began, while we were half way there, we visited a floating '7/11', got some diesel that was freaking cheap and some of the guys got their nicotine fixes at really low cost. Then it hit like a MotherF****R, Thunderstorm in every direction... zzzzzz... The boat man tried to cheer us up saying the current was ideal and we would go home early cos we didn't have enough coolers etc... It worked for a little while, but the mood soured when we couldn't get much live fish for bait...

Couple of hours later we were at the first spot. All the lines went out, the current wasn't strong. We we using a size 10 sinker and fishing a little off the bottom with ranggong rigs... 5 mins in the boat man's rod was bending and Jith who was the closest brought us a nice looking Chermin. The Chermin was attacked on the way up as there were bite marks on the tail. Hopes were up, fish finder was showing a lot of action beneath us but..... no further bites.... We moved on to the 2nd spot and guess what, Ah Poh's rod saw action again, this time it was a healthy grouper which he landed himself... Suddenly two rods at the back of the boat saw some action... I hesitated as my bro-in-law, Shankar took his rod and gave it a strike and it was fish on... at the same time the boat man told me that it wasn't a cross line and that i had a fish too... I took up my rod and began reeling my line in. Finally a bat fish which fancied my live fish came up on my line. My bro-in-law got a little excited i think. (he didn't have a fish on, it was mine.:P) As i was using a circle hook and the fish was unhurt, we let it go. After that it went quiet for awhile, then i hit a Tee Boon, which is from the snapper family.

Night fell and after a quick dinner we resumed fishing at another spot. Then Shankar hit a nice Ang Chor or Golden Snapper on kelong sotong. The full moon was truly beautiful and soon a whole school of flying fish came to visit. It was quite a sight. Then we spotted them, in the dozens. Squid! Ah Poh began scooping them up for us to use as bait. I hooked one up by the tail and dropped my line, almost instantly i was rewarded with a nice Ang Chor. Then it was Kenneth's turn to hook up a fish and it put up quite a fight. When it surfaced, we saw another Batfish, this one thought he was a Chermin and put up quite a fight. Unfortunately this guy was badly hurt, guts coming out of his mouth and all so he went into the ice box.

It was almost 3am and we were starting to feel frustrated. Coming such a long way with only so little to show for. The big boys were not biting, the small ones were being fussy. We had changed spots more than a dozen times. We had their favorite bait. The current was in our favor. Still no bites. One by one we dozed off. Until it was just me and Jith at the back of the boat. As i was nodding off, i heard a distant rumbling of an engine getting louder and louder..... I woke up and was blinded by this light shining on us from another boat that was headed towards us. I woke Ah Poh up and he got ready to move. The stupid boat man from the other boat must have fallen asleep. They missed us narrowly. Sheesh. Everyone woke up and it was back to fishing. It was almost 6am and Kenneth hit a brace in quick succession. The first was an Ang Chor, on a live squid. The next was a table size grouper on a half dead squid. I had a big take on my rod, but the fish got away. And that was it. We decided to head back as another storm was heading our way. Til the next trip. - Isaiah

Here is the only picture of our trip.


Look at the color on the fish, nothing like what we see in ponds. 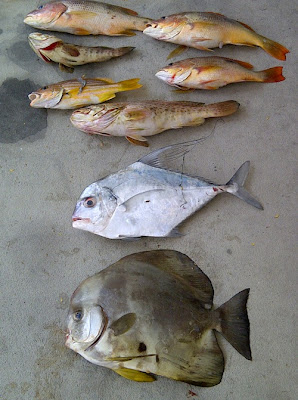