Jith and i decided to cure a late night itch to fish. So after some deliberation we headed down to Pasir Ris Pro Pond as we had not gone there in awhile. We got there way after the last fish release, so we were fishing for left overs. We set up our rods. Bait for the day was a 100 grams of live prawns and a tray of dead prawns. Jith decided to head over to the big old tree with a live prawn and floater rig, while i stayed in front of the keep nets spinning peeled dead prawns on a single hook rig. First blood to Jith. I saw his float go down from across the pond, he reeled in his slack as i muttered STRIKE! Fish on was a nice table size Seabass. 1-0 to Jith.

In the next few minutes i hit 2 mangrove jacks at the same spot. 2-1 to me. Kekekeke. The bite slowed down and i was beginning to get sleepy when i saw Jith's float go down again. He wasn't aware so i called his Hp to tell him his float went down! whahahahaha. Good thing the greedy fish swallowed the hook. He brought up a nice Snapper without much effort. 2-2! When he came over to drop the fish into the keep net, my line went slack (I was already in parking mode by this time. Albeit at the same spot i got my first 2 fish) Reeled in the slack, felt a bugger chomping away on the end of the line. Waited for him to pull before i gave him a strike. Another MJ landed. 3-2 to me. Unhooked him, re-baited and cast to the same spot and with in seconds of landing i got a strong take. Another MJ. 4-2.  Jith said he needed to catch up so he hooked up two prawns and tossed it in front of the tree again. Few minutes later the float disappeared. This time it was a bigger Seabass. It took him a longer time to land it. Once all the splashing and acrobatics ended, the fish sort of surrendered. As it began to drizzle, we decided to call it a draw and head back home. 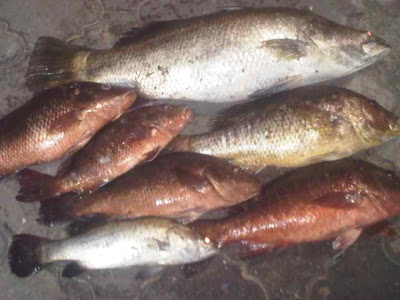