April 22, 2012
Today, we had a couple of friends join us at the pro pond for an early morning session. After explaining to the new guys about the landscape of the pond, we started fishing. Because there was almost 10 us, and also because the skies were turning grey, Panjang released the fish immediately. We waited, rods in hand, silently encouraging the milkfish on our lines to be the best kamikaze of the lot! Strike!!!!!! Fish on!!!! One by one the floats got sucked under, the reels started singing and i believe at one point all 10 rods were hooked on to a fish. Mass chaos ensued, lines were tangled, hooks were spat and fish were being landed and lost left and right. 8 out of 10 were landed.

Then some one suggested a mini competition for the heaviest catch. It was on. The trash talking began and mini alliances were formed but, it was still friendly. By the end of the first hour about 20 fish were landed. There were some big snappers but none distinctly larger than the rest. It seemed that the competition was pretty close. Every one had landed at least a fish each. One guy had landed 6!!!! The catches were getting sporadic and the biggies were nowhere to be found ( or so we thought.)

Out of the blue there were two huge takes, almost simultaneously. They were biggies. Everyone else was cheering on the two guy who were hooked up. One seemed to be a big snapper and the other was definitely a big grouper. Most of the lines were removed to prevent tangles. The grouper managed to outsmart the angler, and got into a tunnel and cut off the line. A moment of disbelief was followed by a round of cussing and swearing. All eyes were on the snapper. It had been a couple of minutes and the fish was tiring. Eventually it was brought near enough to be landed. This is when triumph, turned into tragedy.  Someone grabbed the leader, and was about to lift the fish out, when with a final shake of the head, the snapper managed to dislodge the hook and swam away to fight another day. Almost on cue it began to pour!

We were all squeezing under the umbrellas which were not of much help anyways. Drenched to the skin, and freezing in the cold wind. We kept morale up with some banter about some recent offshore trips, we had been on. It went quiet on the fishing front.

Time for a change of strategy! Some of the floaters came off. This seemed to work almost instantly as a couple of mangrove jacks were landed in quick succesion. Then Kenneth's rod had a huge take, and line began peeling out of his reel. (he loves fishing with minimal drag.) It was a BIG Seabass. The fish put on a good show and was eventually subdued. As i was the closest to him, i assisted him in landing the fish. I was warned by his alliance that if the fish got away, that i was going for a swim to get it back. (not that it mattered anyways. i was already drenched to the bone.) I grabbed the leader and lifted the fish out of the water, cutting my finger on the leader in the process. The fish weighed in close to 4kg. There were claims that the boga was faulty and that the fish was heavier and i agreed having been the one to lift it out. :D We had some other friends show up as spectators, despite the foul weather.

The rain was relentless and showed no signs of stopping. We were mid-way through the final hour. Samuel had hooked on to a grouper earlier and the fish had cut him off at the ledge. Fatigue began to set in and we called it a day. We landed about 30 odd fishes, an assortment of mostly golden snappers, some mangrove jacks, a few pomfrets and the big seabass. A few of the guys took their catch and left even before the photo taking. They were cold, wet and extremely hungry i suppose. 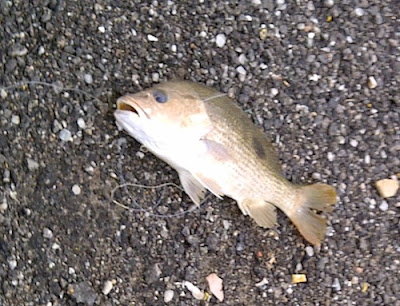 Some of My Catches 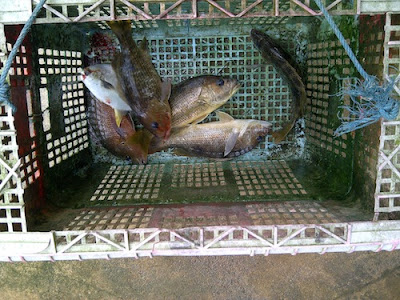 The Champ and His Fish 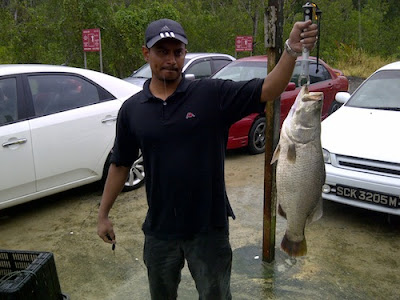 Group Picture with who ever was left. 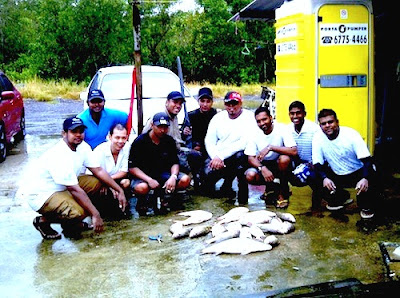 We had fun despite the rain. And we're gonna organize a proper mini competition with 90kg of fish with cash prizes of $300, $200, $100 for the heaviest catch for 20 pax. Drop us an email @ teamsaltheads@gmail.com if you are interested to join us.

On a separate note. Our caps are finally here!!!! wheeee.... 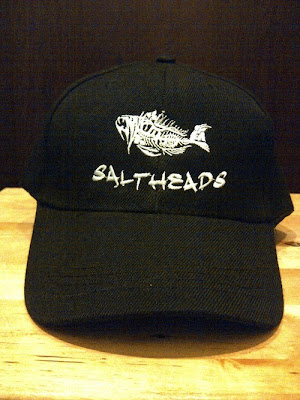