April 28, 2012
Solo mission today. Went to the pond at about 8am NOBODY fishing in the Pro Pond. Rubbing my hands in glee, i quickly set up my tackle and sent out my milkfish. 5 minutes later storm.....  !@#$$#@! ZZZZZZZZZZZZZZZ....  I think the fish also sian. See the milkfish, kill the milkfish, swim away. Switch to live prawn and move to another spot. The minute the float touched the water, fish on!!!!!  Nice Golden Snapper. But the fish spat the hook as i was trying to land it... Panjang, who was observing silently went, 'hollible la u' and grinned. He told me to make every catch count as there will be no fish released later on at 10am. WTF!! Talk about a bad start becoming worse. Re-bait and went back to the same spot. Some of you might wonder why the same spot? I have this theory that fish like snapper usually congregate together in the same spot. So if i hit a fish at one spot, i will target the spot till it goes quiet for more than 20 minutes.

Anyways, it took only a couple of minutes for the float to disappear. Fish on!!! While i was landing the fish, Panjang walked up with a scoop net full of snappers ( about 5-6 pieces) and threw them in the pond. I put the fish into the keep net and went to the same spot. Fish on again!!! This time the fish put up a better fight. Landed a snapper about 2kg or slightly below. Changed to milkfish and went to the spot again. Nothing at all for more than 10 minutes. Thinking the fish had moved i went to another spot for about 20 minutes. Nothing there too. My milkfish had become too tired to swim so i let him go. Grabbed a prawn and hooked it up. Then i decided to try the first spot again. Goalkeeper again. As soon as the float hit the water, it went down. Fish on!!! Another snapper landed. Re-baited and hit the same spot again. Fish on Again!!! This time i lost the fish. I think i didn't strike well, and the fish managed to dislodge the hook when there was some slack. Went back to the same spot and would you believe it??? Fish on in seconds!!! Landed another healthy snapper. I had run out of live prawns and only had a milkfish left. Hooked him up and sent him to his doom at the snapper spot. Absolutely nothing!!! Went to get another 100g of live prawns, released the milkfish and hooked up a prawn. Float went down instantly. Fish on!!! So today they only fancied prawns! Landed my fourth snapper. Soon after a 5th snapper followed from the same spot.

Then as i was re-baiting i saw this huge snapper float to the surface. About 3-4kg. As it drifted to the side of the pond, i saw that it was barely alive. He had a couple of hooks in the mouth and hardly moved. In a few minutes it died. I alerted Panjang and he scooped it out and discarded it. What a fight he must have put up. All those anglers cussing and swearing every time he got away...  RIP big fish.

After that i had one more take. But the hook didn't set and i was left with half a prawn. Must have been a smaller fish. Tried for some pomfret, but they were not hungry. Called it a day after that. 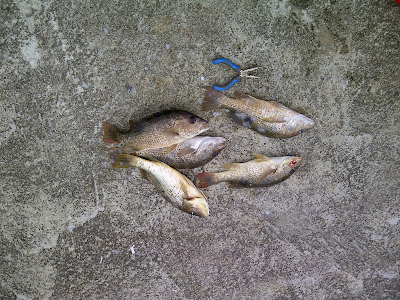