April 15, 2012
So I got myself a new setup for jigging in Desaru and Sailfish in Rompin ( Sue me i can't afford two setups!), After about a week reading on the internet and visiting tackle shops, i finally settled on a Daiwa Ballistic 4000SH reel and a Majorcraft Crostage PE1-3.

Here are some specs for the geeks. 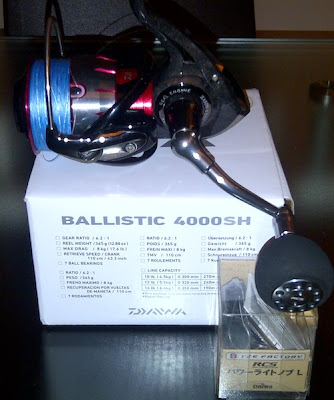 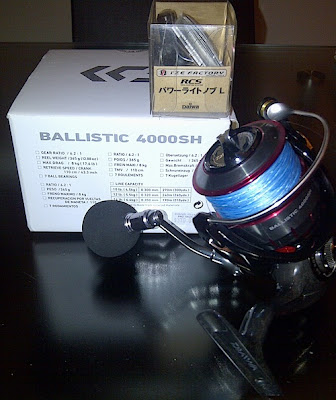 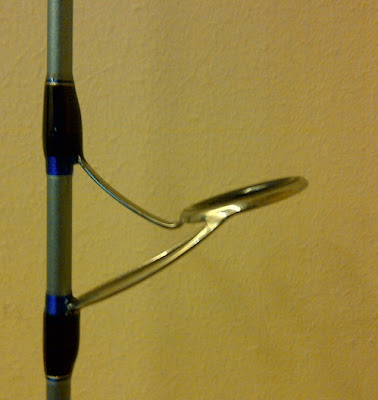 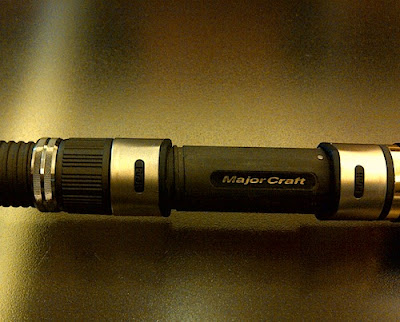 Initially, i was looking at the new Caldia 4000. But due to the lack of stock for the 4000 size ( the 3000 models all came with shallow spools and i for one don't believe in wastage of good braid as you cannot fully spool on 300 yards of 20lbs braid.) I settled on the Ballistic which was 20 bucks more and didn't feature the anti-reverse or come with a knob handle. WTF? Impulsive? Foolish? Only time will tell. :P
The first thing i did was to change the handle on the reel to an RCS knob. Not only did that improve the feel of the reel, it also made the reel look fierce. ( or so i tell myself) Next, i loaded it with 300yards of the new Power Pro Slick 8, 20lbs line. Ok reel settled, next to find a matching rod. I chose the Majorcraft Crostage from the lot as two of it's features caught my eye. First, it had K-guides. For those of you who don't know, K- guides are slightly angled upwards like Eging rods. This is to prevent wind knots and the wrapping of the line on the tip of the rod during jigging. The guides are also generally wider, making casting smooth with FG or Uni to Uni knots. Second, it features a locking device below the reel seat, which enables you lock the reel in place with having to worry about it coming loose. Rod Settled.

So off i went to test out my new set at Dave's GT pond. He had recently added 50 new GTs in all sizes to the pond. (This is what his staff Morgan told me anyways.) I tied an FG knot to connect my leader to the braid and was using a size 5/0 Owner Circle hook. First cast, decided to try for a GT to test the reel's drag capabilities.( I had not adjusted the drag at all since purchasing the reel and it was pretty loose.) GT on!!! ZZZZZZZZZZZZZZZZZZzzzzzzzzzzzzZZZZZZZZZZZZZ the line peeled out. Played with the drag setting a bit and since it was a GT i decided to lock the drag. It was rock solid and no more line peeled out. I landed the GT which weighed in about 6kg. Which explains why i overpowered the fish so quickly. ( Max drag at 8kg) Pretty happy with the reel's performance and after a few more GTs i decided to test the rods lifting power. Hooked up a whole piece of dead fish and threw it just before the platform. :D Grouper Time! Within 5 seconds i had a take and the line went under the platform. Got down on one knee, dipped the rod into the water and began reeling and lifting ( i would say drag was set in the middle?) The tug of war lasted for about 5 to 6 minutes, before the brute on the end of the line threw in the towel. Out came a beautiful Queensland Grouper weighing in at about 5.5kg. Hooked up another fish and threw it at the opposite side of the platform. Nothing happened for a couple of minutes and then BAM!!!! Big take and it was running under the platform and into the stilts. Tightened my drag a little and pumped the reel and lifted the rod. He was still taking line out and went round a stilt. I could feel the leader rubbing against the wood. Locked the drag, Dipped the rod into the water and lifted. This is where i was totally impressed with the rod's back bone. lifted and reeled until i could see the tail of the fish and he wasn't ready to give up. Pulled out another queensland, this one was definitely bigger. Splashing about refusing to be landed. Finally he surrendered after i told him that i was going to release him (if you ask me i'd say he acknowledged the notion with a shake/nod of his head.) He weighed in at a healthy 7kg. Overall i was pretty pleased with the set up. It cost me slightly more than $500. ($600 with the RCS know and Slick 8) Money well spent? I can't tell yet. Probably have to wait till i hook on a biggie in Desaru or a Sailfish in Rompin!

PS.  I was so impressed with the rod that i went and got a lighter version of the crostage, a PE0.8-2 for a lighter set up. :)